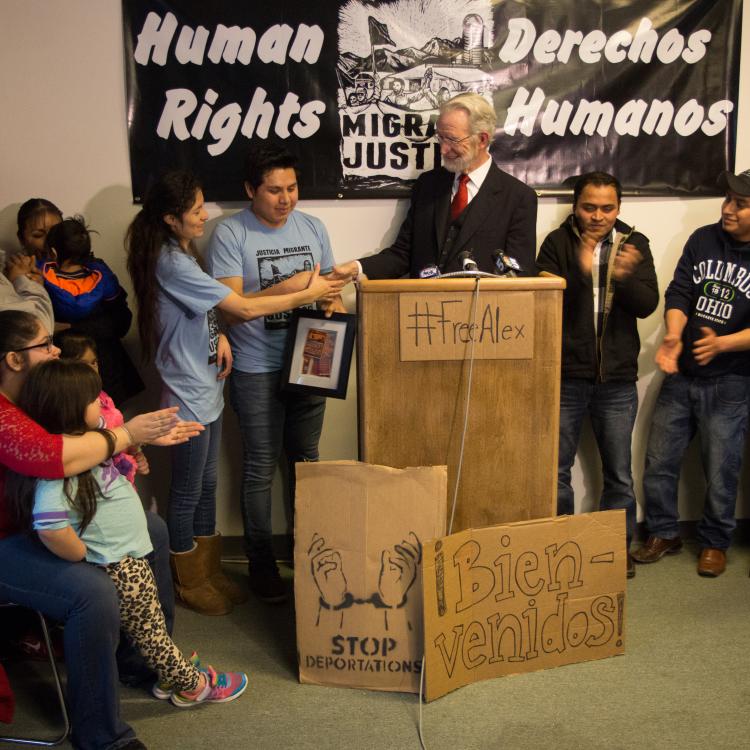 Monday’s freezing rain across Northern New England could not chill the spirits of a people hungry for justice.  The public space in front of the cold stone federal building where Boston's Immigration Court sits was alive with colorful banners, chants, songs, a brass band, roving picket lines, and compelling words from faith leaders and community members. Hundreds of people, including Cosecha members and allies, the ACLU of Massachusetts, many union workers, and a bus full of friends and family from Vermont, came together to support the call for freedom for Migrant Justice leaders Enrique Balcazar, Zully Palacios and  Alex Carrillo who were inside the JFK Federal building with their fate in the hands of our nation’s inhumane and brutal immigration system. 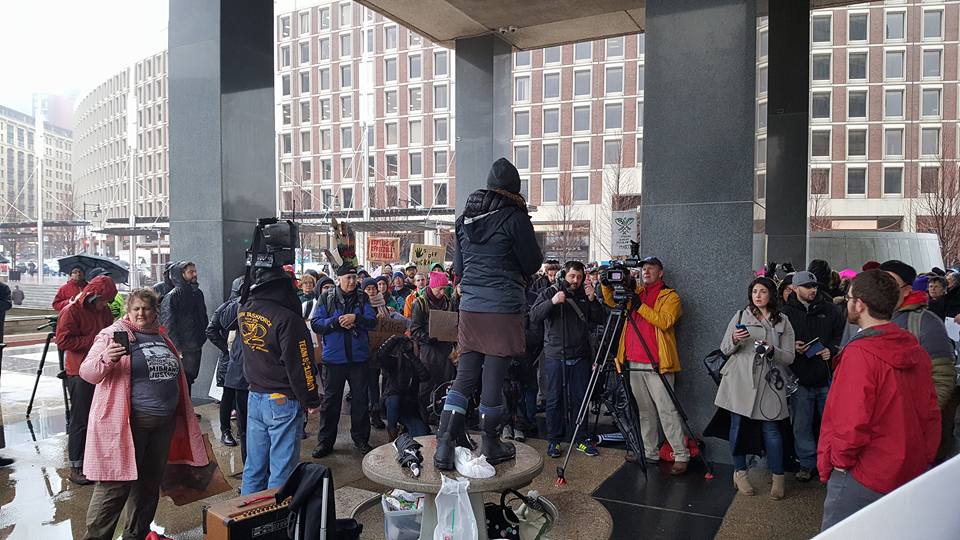 The journey to Boston that so many made with so little advance notice was captured well by nurse and long time union activist Mari Cordes, who reflected in a Facebook post afterwards:

“Yesterdays action in Boston was church for me. A sacred space where we lifted each other up, and bore witness to pain and sadness (Alex being detained without bail), and celebrated that Kike and Zully would be released, celebrated that collective power and love does win. And the pain and sadness to hear that the judge commented that he has many more immigrant cases on the docket than he has before. And the hope to know that our singing and chanting outside in the cold rain was heard by him and the whole courtroom, to which the judge not only said was distracting, but was our first amendment right. In that church yesterday were many friends, many of whom were new to me and one in particular I recognized as a powerful sister (also literally - Sr.) - Sr. Marie Therese (Tess) Brown, a woman who has committed her life to helping farmworkers and someone I would love to have the good fortune to spend more time with. And Mara Dowdall who helped by adding depth and color to this story by sharing her experience with me of what went on in the courtroom while we were communing outside. She said looking out the window it was like watching a pilgrimage, punctuated with bright umbrella colors and the percussive music of Brass Balagan and our chants.”

After over ten long days in jail for no crime but speaking up for human rights, Migrant Justice leaders Enrique and Zully were released on Tuesday, after a federal Immigration Judge in Boston granted bail in both cases.   In a cruel and unexpected twist, Alex was ordered to remain in jail without bond, even though the only criminal charges against him were dismissed.  This decision risks keeping Alex away from his wife and four-year-old daughter, who are U.S. citizens, for an extended period of time while he pursues immigration relief.

Since Alex, Enrique and Zully’s arrests by ICE, over ten thousand people signed petitions  demanding their release.  With less than 12 hours notice, five hundred people marched in Burlington and, within a couple of days, hundreds turned out in marches in Montpelier and Brattleboro to protest ICE’s trampling of free speech rights and separation of our communities and families.  Nearly two hundred friends and family wrote individual, detailed letters calling on the Immigration Judge to set Alex, Enrique and Zully free. And on Monday, March 27, hundreds of people showed up to bear witness outside the Immigration Court in Boston, standing together in freezing rain, asking our justice system to do justice here and release Alex, Enrique, and Zully to their families and friends. 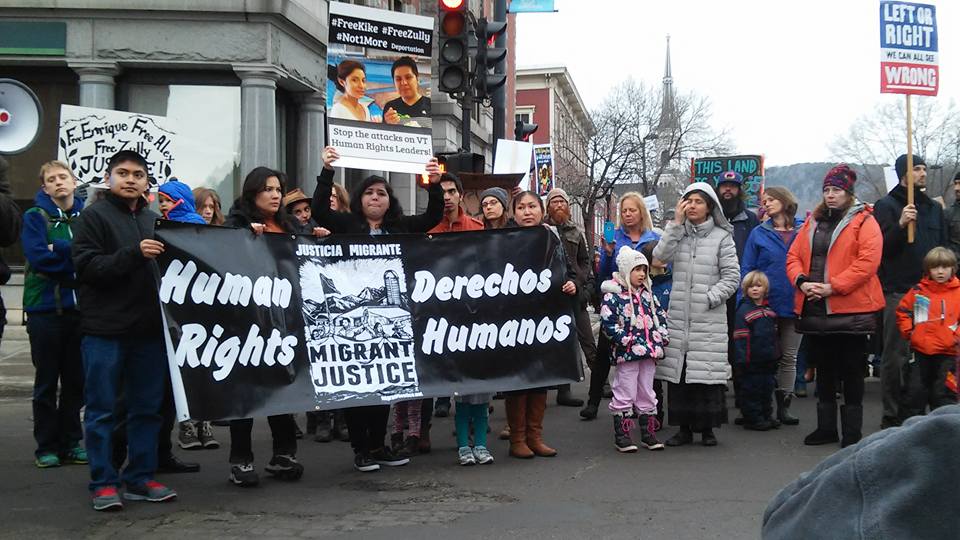 After the judge heard this outpouring of community support, he overruled ICE’s previous decision to hold Enrique on a very high $14,000 bond and Zully on no bond, an extraordinary decision by ICE for someone with no criminal record.  The judge understood that they are not dangerous to the public and set what is considered a relatively low bond in the immigration system.  Unfortunately, the judge held Alex’s dismissed charge against him and Alex  remains  in detention - for now.  The community will keep up its fight for all its loved ones and Alex's family will let us know what we can all do next to support their fight for freedom.

Zully's and Enrique's freedom was won just in time for Farmworker Awareness Week, an annual celebration of the birthday and work of Cesar Chavez, as they keep their fight going for human rights and Milk with Dignity.  Enrique, an architect of the worker-led Milk with Dignity Program, will be hitting the road for the “Milk with Dignity Speaking Tour.” The tour will rally consumers across the nation to call on Ben & Jerry’s to follow through on its 2015 delayed promised to source itsmilk in compliance with the human rights of farmworkers by joining this program modeled after and designed in collaboration with the Fair Food Program.

First up, on Tuesday, the Migrant Justice community joined together in love and strength to welcome back Enrique and Zully home to Burlington while pledging its support to Alex's family at a big gathering at the Migrant Justice headquarters. Both Balcazar and Palacios relfected on the recent arrests--and how it all began when ICE followed them right from the very spot they now stood--after they left Migrant Justice office and were headed home on March 17th. Balcazar shared,

"Everyday a new group of immigrants, just like me--workers, fathers, brothers, sisters, and mothers--would get brought into prison, which was overcrowded and filling up. The war on immigrant workers is on. My brothers and sisters in prison asked me to speak out on the deplorable conditions and treatment we face--dehumanized and criminalized once inside. Nobody should be treated this way."  The wife of Alex, Lymarie, shared her story, "I have mixed emotions, it is wonderful to have two family members back--Kike and Zully--but the injustice we've been through and the pain and suffering of my family right now is hard to put into words. But I can tell you, I won't give up and we can't give up this fight for justice for Alex."

Balcazar and Palacios were joined by much welcomed allies: the teachers and education professionals of the National Education Association, the United States’ largest union.  In a tremendous show of support and solidarity for human rights, the NEA presented Migrant Justice with its César Chávez Acción y Compromiso Human and Civil Rights Award.

The NEA, in an statement released on Monday while all three workers were still imprisoned, “We denounce in the strongest terms possible the arrest of these activists and call for the immediate release of the detained Migrant Justice leaders,” said NEA President Lily Eskelsen García. “America welcomes strivers and dreamers and their diverse talents. When we embrace the contributions of immigrants, the future is brighter for our country. We reject this targeted attacked on Migrant Justice because it undermines these core American values. We do not arrest people for speaking up for those who do not have a voice or for doing what we know is right, just, and courageous.”

NEA President Eskelsen Garcia continued, “Migrant Justice is organizing farmworkers to address the challenges they face and bringing about systemic change to improve and advance their fundamental human rights. They are a national model for their cutting edge human rights organizing and concrete victories. Migrant Justice motivates us, inspires us through their deeds and actions, and embodies what is just and right about César Chávez.”  NEA Executive Committee Member George Sheridan and Vermont-NEA President Martha Allen stood shoulder to shoulder with Migrant Justice at a room full of supporters on Tuesday night. Sheridan for eight years worked with Cesar Chavez, Dolores Huerta, and the United Farm Workers, AFL-CIO, organizing boycotts of grapes, lettuce, and Gallo wines. Allen is a K-12 librarian from Canaan who serves as Vermont-NEA President. The two union leaders recognized the work of Migrant Justice as carrying forward the legacy of Cesar Chavez, presenting the awared to Balcazar and Palacios and the Migrant Justice team declaring their solidarity, as the nation's largest union, to stand with Migrant Justice in the road ahead.

After the press conference and community report back on Tuesday Migrant Justice allies held a rally outside the office, singing songs from the civil rights era mixed with tunes of new generations in this long struggle for human rights in the USA. Migrant Justice then announced a couple next steps to supporters, eager to keep the momentum building, for this struggle for farmworkers’ rights in the coming days sharing that they would announce next steps for how to support Alex and his family but for now it was time to get back on the road for Milk with Dignity:

On Friday, March 31st, which is the birthday of United Farm Workers of America co-founder Cesar Chavez, Migrant Justice is calling on allies across the nation to stand up for farmworker’s rights by calling Ben & Jerry’s all day demanding it finally make good on its 2015 commitment to join the Milk with Dignity Program.  Call Ben & Jerry’s on Friday and tell them “Actions Speak Louder than Words! Farmworkers’ Human Rights Cannot Wait! Honor your Commitment to Farmworkers & Join and Implement the Milk with Dignity Program without Further Delay!”  Hours of operation are 9am-5pm eastern. Call (802) 846-1500 all day and tell everyone you know!!! More information here.

Then on Saturday, April 1st, Balcazar is expected to cap off the week returning to the fight for Milk with Dignity at a daylong conference at Harvard University sharing Migrant Justice's fight for justice for workers in the food system addressing hundreds of Bostonians. Then, at 6pm, immediately after the conference, Migrant Justice members and a growing network of human rights allies rally outside of Ben & Jerry’s Scoop Shop in Harvard Square to demand the company implement the Milk With Dignity Program as it promised nearly two years ago in order to support the human rights of farm workers in its own dairy supply chain.

And of course...there is the call to action for a huge mobilization on May Day in Burlington, VT and across the country!!! Stay tuned for more!!!