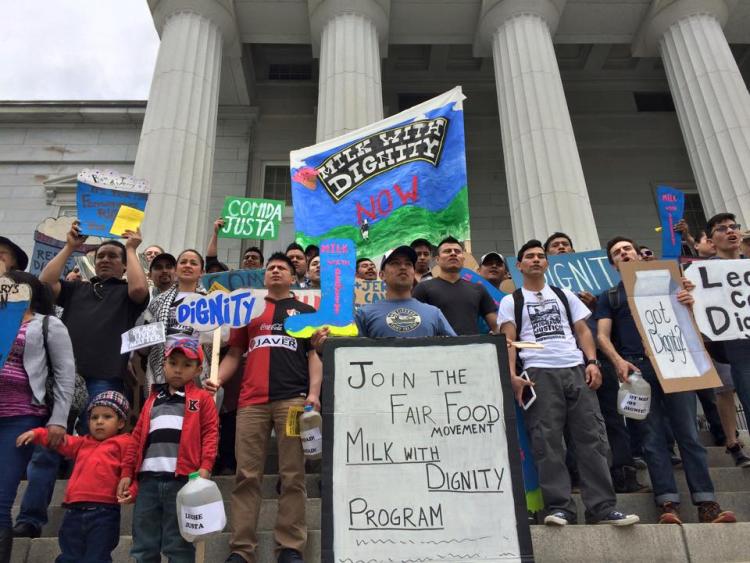 “It’s been nearly two years since Ben & Jerry’s promised to source its milk in compliance with our human rights and we’re fed up with their endless delays and excuses. For many of us workers that means two years of working 12 or more hour shifts with no breaks, two years without a raise, two years of parents without a single day off to spend with their kids, and two years without a real voice--while B&J’s milk and profits keeps flowing. Enough is enough--¡ya basta! Join us on this speaking tour culminating in a big May Day “March for Dignity” in Burlington VT, the birthplace of Ben & Jerry’s ice cream, to demand Ben & Jerry’s follow through on their promise to protect the human rights of farmworkers by joining the MD Program now!" --Migrant Justice Farmworker Coordinating Committee

Join and share the Burlington, VT May Day March for Dignity action here!

On May Day, 2015, from the steps of the Vermont State House, to the rowdy cheers of hundreds of workers and allies, farmworker leader Enrique Balcazar publicly demanded that Ben & Jerry’s stand up for farmworkers’ rights in its supply chain, kicking off the Milk with Dignity campaign:

"Ben & Jerry's has stood up for cows (No RGBH), for chickens (cage-free egg agreement with Humane Society), and for international farmers (fair trade). They've pledged support for climate justice, for Occupy Wall St...So, after four years of us educating them about farmworker human rights abuses in its supply chain, it’s time Ben & Jerry's stands up for the rights of the same farmworkers who put the cream in ice cream by joining the Milk with Dignity Program!"

In the following weeks farmworkers marched, rallied and shared their struggle reaching thousands of consumers eager to support their fight for human rights (click here to see what’s inside your pint of Ben & Jerry’s--when it comes to worker's rights).

Then, on June 19, 2015, on the eve of 17 actions across the nation and with pressure mounting, B&J’s signed an “Agreement of Cooperation” committing to “work with Migrant Justice towards a written agreement to further detail and realize the essential elements of Migrant Justice’s Milk with Dignity Program that will be adopted in Ben & Jerry’s Northeast dairy supply chain.” The next day, the scoop shop rallies and protests were converted into farmworkers’ rights celebrations, urging B&J’s to put their words into action by implementing the Milk with Dignity Program Agreement in its supply chain, landing MJ and B&J’s on the front page of The NY Times business section.

A recent piece in the Christian Science Monitor analyzed the prospects for an expansion and adaptation of the Worker-Driven Social Responsibility (WSR) human rights model used in the highly successful Fair Food Program, from which the Milk with Dignity Program is adapted. The Monitor recaps Vermont dairy workers’ journey:

“In 2014, Migrant Justice invited Ben and Jerry’s to join a program that it called Milk with Dignity, which would bring independent monitoring to the farms from which the company buys milk. Ben and Jerry’s, a subsidiary of the multinational Unilever, declined, arguing that its own corporate ethics code already protected workers. Migrant Justice responded with a nationwide protest. After a few weeks of bad publicity, with demonstrations outside ice cream shops in more than a dozen cities, the company gave in. The two sides are still negotiating terms of an agreement.”

Wait...Huh...What? I Thought My Cherry Garcia Was Already Made with Milk with Dignity?

When B&J’s pledged to join the Milk with Dignity Program back in June 2015, it didn’t sign up for just another label, or empty standards with no enforcement, or a glossy marketing scheme. Rather, the MD Program is a Worker-Driven Social Responsibility (WSR) Program, adapted from and designed in partnership with the highly-acclaimed Fair Food Program, which represents a clean break from Public Relations-based and “business as usual” Corporate-Driven Social Responsibility (CSR) and a shift to a real worker-led human rights program. After nearly two years of negotiations with Ben & Jerry’s, Migrant Justice’s Milk with Dignity Program is ready to launch. But there’s just one missing ingredient--Ben & Jerry’s follow-through on its commitment to implement this worker-led Program in its dairy supply chain.

To date, Ben & Jerry’s continues to find a litany of excuses to delay its full commitment to, and implementation of, the Milk with Dignity Program. It appears that while B&J’s might like the idea of WSR in theory, it is much less comfortable with workers actually being empowered to drive change in its own dairy supply chain.  While B&J’s has been busy tweeting and blogging about racial equity, prison justice, migrant rights, and the “right to know” (about GMOs--but not the right to know about workers’ rights) it refuses to take concrete action and draw upon its considerable resources to actually protect the human rights of dairy workers in its own backyard.

So, Vermont dairy workers are hitting the road for a Milk with Dignity Speaking Tour and are joining with allies for a “March for Dignity” march and rally in Burlington, marking the two year anniversary of our first call to action, to demand B&J’s stop dragging its feet and join the Milk with Dignity Program without further delay! As MJ farmworker member José Ventura shared at a recent farmworker gathering, “We cannot wait any longer--because while Ben & Jerry’s comes up with all these excuses our rights as workers continue to be violated. Enough is enough! And this time around, the public pressure won’t stop until workers have a signed full agreement in hand as we were promised nearly two years ago.”

Join us on the Northeast Milk with Dignity Speaking Tour!

Building up to May 1st, Migrant Justice is kicking off the Northeast Milk with Dignity Speaking tour gearing up to reach hundreds of consumers and allies hungry for worker-led solutions in the food chain and enlisting their support to call on Ben & Jerry’s to deliver on its long-delayed promise to source its milk in compliance with the fundamental human rights of farmworkers through the Milk with Dignity Program.  Fittingly, Vermont dairy workers will start this tour right where the strategy to build the Milk with Dignity Program originated: standing shoulder-to-shoulder with Florida tomato pickers fighting for their own human rights.

Allies Hungry for Justice learn about VT dairy workers human rights struggle and the intersections of racial justice, immigrant rights and the Milk with Dignity campaign

April 1, Harvard--Just Food? Forum on Labor Across the Food System

Milk with Dignity will be featured as a cutting edge 21st Century solution to secure worker’s rights in supply chains. Farmworker’s update conference goers on B&J’s delayed promise to take action for human rights in its dairy supply chain.

April 6-7, Washington DC--Presentation and Action to be Announced

MJ holds a workshop about farmworker’s journey to design and build MD Program and how it is poised for progress with one missing ingredient--B&J’s follow through on human rights.

Our alies over at Latin American and Latin/Caribbean Studies (LALAC) and the Hanover Quaker Meeting have invited Vermont dairy workers to share our VT dairy worker struggles for Milk with Dignity and immigrant rights...