Farmworkers Call on Ben & Jerry's to Stand Up for Dairy Workers' Rights in Supply Chain! Stay tuned for a May Day Milk with Dignity on-line petition and big national call for future summer actions at Ben & Jerry scoop shops across the nation!!!

Join farmworkers on May Day!!

What: Bring Empty Plastic Milk Jugs--fill it with rice and join our rockin' Milk with Dignity Brigade!

If you can't come: Stay tuned for petition launch, social media blitz, and summer national day of action announcement on May Day!!!

Register here to join us on May Day and get more info about the whole day here.

For four years, Migrant Justice dairy farmworkers have been meeting with Ben & Jerry's in order to educate the ice cream company on the gross labor abuses and housing crisis facing Vermont dairy workers in its supply chain.

After months of requesting an in-person meeting with Ben & Jerry's CEO Jostein Solheim,  Migrant Justice was granted a meeting last Monday instead with members of Ben & Jerry's Caring Dairy Program, Social Mission Team, and PR department. Farmworker Victor Diaz concluded the meeting by posing the simple question, "Will you take responsibility for these worker's rights abuses in your supply chain and sit down with us to negotiate an agreement to participate in the Milk with Dignity Program -- yes or no."

While workers say the meeting was hopeful, they also left without the one thing they set out to achieve: a clear commitment from Ben & Jerry's to negotiate an agreement.  Farmworker leader Enrique Balcazar explains, "Ben & Jerry's has stood up for cows (No RGBH), for chickens (cage-free egg agreement with Humane Society), and for international farmers (fair trade). They've pledged support for climate justice, for Occupy Wall St, and are rated a B-Corp--which is supposedly the highest standard for corporate responsibility.”

So, after four years of us educating them about farmworker human rights abuses in its supply chain, it’s time Ben & Jerry's stands up for the rights of the same farmworkers who put the cream in ice cream by joining the Milk with Dignity Program!" 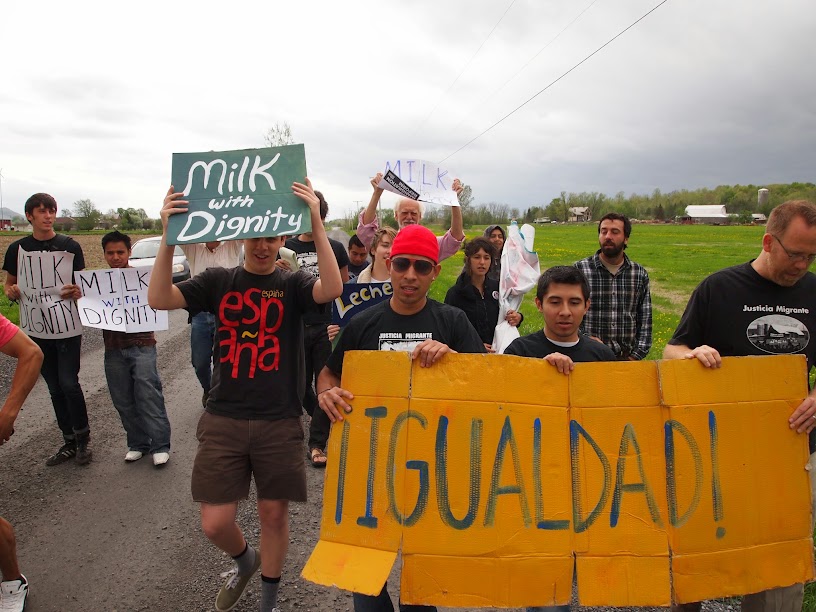 The seeds for the Milk with Dignity Campaign were sowed last summer when farmworker Victor Diaz, who worked at a dairy farm that provides cream to Ben & Jerry's, led a workplace action at his farm after suffering years of abuse and neglect. Victor had enough -- after having paychecks illegally withheld, enduring an overcrowded camper with a leaky roof and insufficient heat through cold VT winters; and working 12-14 hours a day without a day of rest -- and reached out to Migrant Justice. Diaz, now a leader of his community, recalls, "I am very happy to leave behind the darkness that I was living. I depended on my boss, and he felt this and knew that I was dependent on him to maintain my family. I felt I didn't have control of my own decisions.”

This action served as the first step for farmworkers to lay the foundation for the new Milk with Dignity Campaign, starting with an in-depth farmworker survey which served to document workplace and housing conditions on Vermont dairy farms and help envision a 'new day' of dignity together.

The challenges dairy workers faced, established in the survey and after years of community dialogue, were then converted into solutions in the creation of a Code of Conduct—where farmworkers defined the human rights essential to a dignified workplace and fair housing. We noted some dairy farms already had most of the Code of Conduct’s standards in place, demonstrating that it is very much possible to raise the bar in the industry.

Farmworkers then engaged in a study of the dairy industry, recognizing that a corporate-controlled industry places downward pressure on farmers' incomes, and profits rise for the few when milk prices are low for the many. So farmworkers approached Ben & Jerry's, calling on the company to take the lead in the industry -- precisely because they are a corporation that has distinguished itself for its exceptional commitment to social justice. But Ben & Jerry's is also important to farmworkers because it purchases 100% of its cream from St. Albans Cooperative farms where many (if not the majority) of Vermont's 1,200 - 1,500 dairy farmworkers are employed.

In December 2014, farmworkers met with Ben & Jerry's Social Mission Team, putting forth a formal invitation for the first time -- will Ben & Jerry's take the lead in the dairy industry by joining this new Worker-Driven Social Responsibility program?  At the meeting, workers were told "We'll think more about it" and then waited months before receiving a written response. In late March of this year, Migrant Justice dairy workers were invited back -- not to talk more about the worker's proposal, but rather to learn about Ben & Jerry's efforts to incorporate certain elements of Milk with Dignity into Ben & Jerry's already-existing farmer support program called Caring Dairy--an online self-assessment and self-evaluation tool for farmers.

Workers explained that education of employers alone will not produce the fundamental change needed in order to truly ensure workers’ rights are respected in the company’s supply chain. Dairy workers then outlined the Milk with Dignity Program as a much more comprehensive approach, adapted from the Coalition of Immokalee Worker's (CIW) world-renowned Fair Food Program that has transformed the lives of tens of thousands of Florida farmworkers. The Milk with Dignity Program's 5 essential elements include:

The Milk with Dignity Program, like the Coalition of Immokalee Workers’ Fair Food Program, calls on major food corporations to take responsibility for farmworker rights abuses in their supply chains, and to pay a just price, committing to ensure these changes reach down the food supply chain directly to both farmworkers and participating farmers. Migrant Justice farmworker leaders have been engaged in an ongoing dialogue with Florida farmworkers since August of last year to learn about their successful Fair Food Campaign and Program seeking to adapt the core concepts to the VT dairy context.  The development and design of the Milk with Dignity Program was done with strategic support and collaboration from both the CIW and the National Economic and Social Rights Initiative (NESRI).

Farmworkers have decided the time has come to build a movement to call upon Ben & Jerry's to commit to protecting the rights of the workers who put the CREAM in "Vermont's Finest" ice cream.   Join the march with Vermont's farmworkers in the streets of Montpelier on May Day for the public launch of our campaign -- and stay tuned for the announcement of a national day of action calling upon Ben & Jerry's to join the Milk with Dignity Program!

As the Coalition of Immokalee Workers has shown us, the fight for a just food system is long, but united, Si Se Puede!