On October 3rd, over 150 farmworkers, farmers, and consumers joined together to call on Hannaford supermarkets to join the Milk with Dignity program.  Marking the second year anniversary of Ben & Jerry’s entrance into the human rights program, the event celebrated the progress made under Milk with Dignity and called on Hannaford to aid in the program’s expansion.

Rosi, a dairy worker from central Vermont, invited Hannaford to join the program: “Hannaford has the power to transform the dairy industry.  With almost 200 stores around the northeast, they buy a lot of milk from farms where we are working hard milking cows. Hannaford has an opportunity to be a human rights champion by joining Milk with Dignity.” 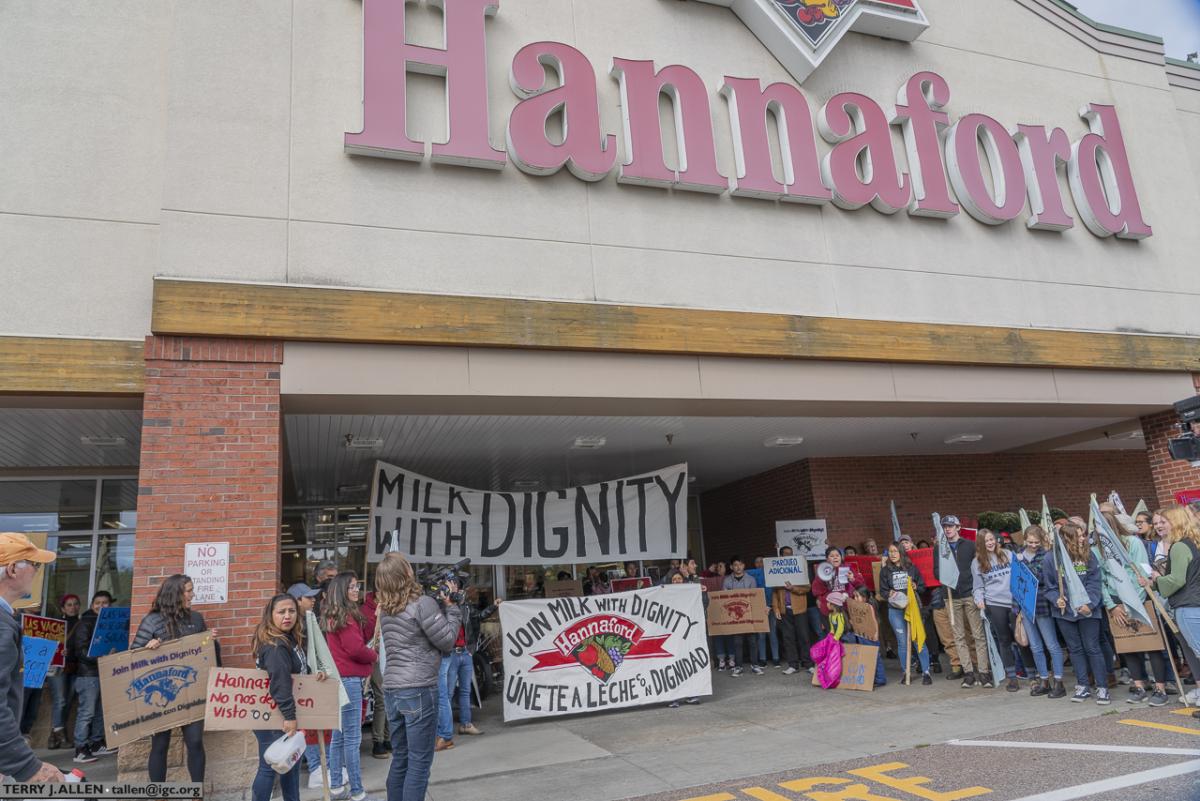 Hannaford’s store-brand milk is bottled by processor H.P. Hood at several facilities around the northeast.  Many stores source from the H.P. Hood plant in Barre, VT, a significant buyer of milk from Vermont dairy farms.  Hannaford is owned by Dutch multinational corporation Ahold-Delhaize, a company that brings in over $75 billion per year in global sales.

Migrant Justice had attempted to contact Hannaford several times in the months leading up to the action but received no response.  On the 3rd, dairy workers from around the state gathered in Burlington, marched to a Hannaford supermarket, and publicly delivered a letter to the store manager.  Farmworkers expressed their frustration with Hannaford’s lack of response to date, holding signs reading: “Hannaford: don’t leave us on read!” 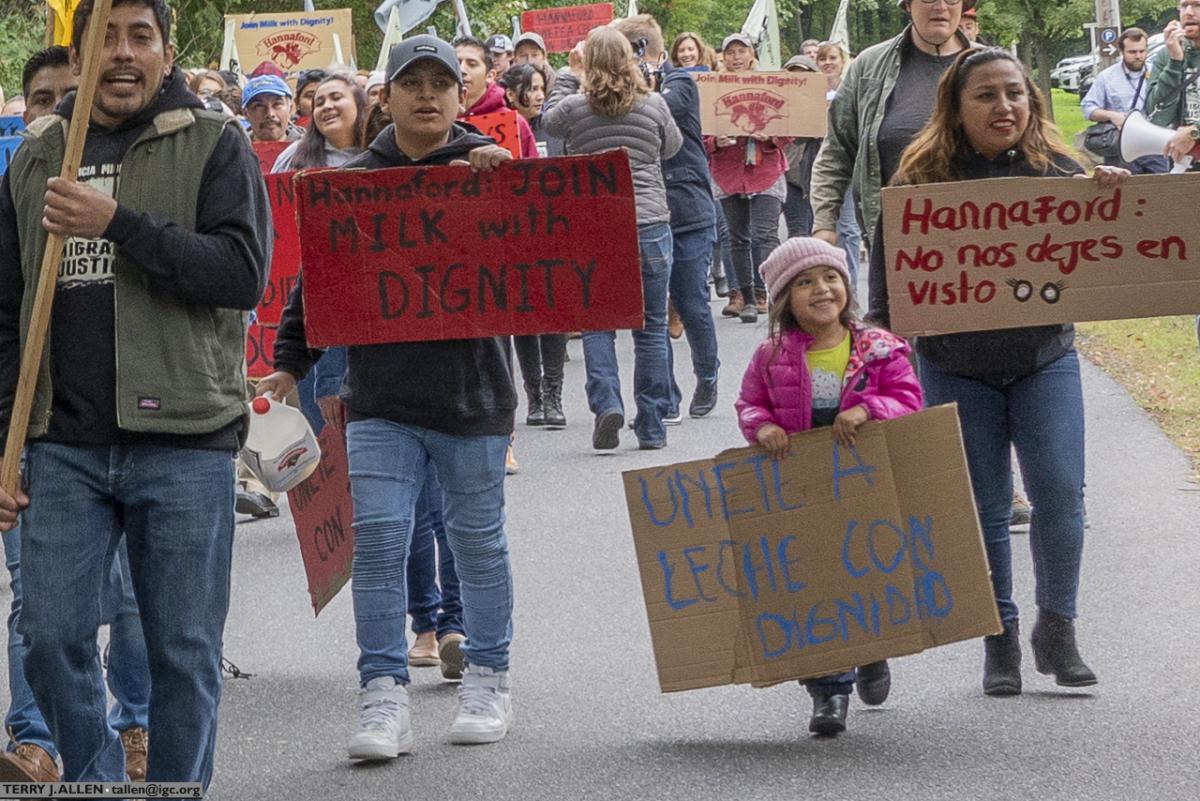 While inviting Hannaford to join Milk with Dignity, dairy workers and farmers extolled the program’s benefits.  Many spoke about the transformations on their farms following Milk with Dignity’s roll-out: higher wages, improved housing, and a new sense of respect and dignity in the workplace.

Jose Luis, a dairy workers from Franklin county, shared his experience: “My co-workers and I have new, dignified housing, where we all have our own room and there is space to rest.  We get paid vacation and sick days, and our check always comes on time. We’ve learned our rights and how to defend them.”

Workers weren’t the only ones singing the program’s praises.  Matt Maxwell, a farm owner enrolled in Milk with Dignity, spoke of the benefits to him as an employer: “The Milk with Dignity program allows us to pay the people that do these very important jobs an acceptable wage.  Since joining Milk with Dignity our farm has maintained a 85% employee retention rate. Less turnover has led to higher morale and greater workplace continuity. The program has helped us make huge strides in employer.” 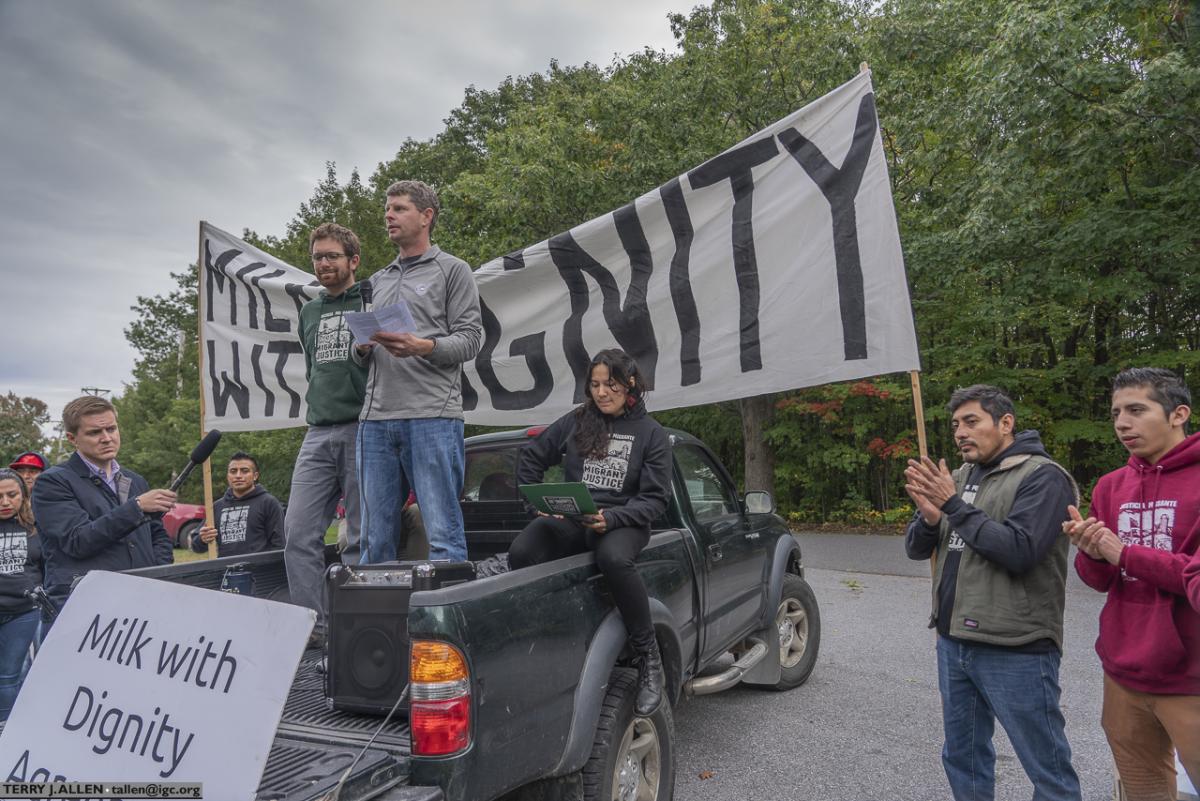 In 2017, Migrant Justice signed a contract with global ice cream maker Ben & Jerry’s to implement the Milk with Dignity program in the company’s northeast dairy supply chain. The agreement was heralded by the New York Times as a step to “improve migrant dairy workers’ conditions.”

By joining the Milk with Dignity program, Ben & Jerry’s committed to source 100% of its northeast dairy supply chain from farms that comply with a comprehensive, worker-authored code of conduct. The company pays a premium to participating farms, Migrant Justice educates workers on their rights in the program, and a third-party auditor -- the Milk with Dignity Standards Council (MDSC) -- monitors farms’ compliance.

Ben & Jerry’s released a statement celebrating the anniversary, commenting: “Milk with Dignity contributes to positive outcomes on dairy farms enrolled in the program and is good for farmworkers, farmers, corporations and consumers.”

The program covers approximately 250 farmworkers on nearly 70 farms in Vermont and New York, and accounts for more than 20% of Vermont’s dairy industry by volume.  In the week preceding the launch, we released a video of worker testimonies highlighting the impacts of the program.

To date, Milk with Dignity has resulted in over $370,000 of additional payments to workers in the form of raises and bonuses.  Additionally, the program has resulted in guaranteed days off, paid vacation and sick days; improvements to housing; new health and safety protections; increased job security; and new policies against sexual harassment and discrimination.

Dairy farms outside the Milk with Dignity program, however, continue to suffer from volatile milk prices, low wages, and systemic abuses.  A recent survey of over 100 Vermont dairy workers developed in collaboration between Migrant Justice and researchers with the Tufts School of Public Health, and analyzed by the Columbia University Law School Human Rights Clinic, shows stark evidence of ongoing risks to workers’ health and safety: 93% of workers have been injured by chemicals, 78% by animals, and 77% by machinery; yet only 18% have access to protective equipment and less than 6% receive sufficient training.

On October 3rd, dairy workers, farmers, and Ben & Jerry’s all came together to say that the Milk with Dignity program is working. The need for its expansion is well documented. The only question left is: what is Hannaford waiting for? 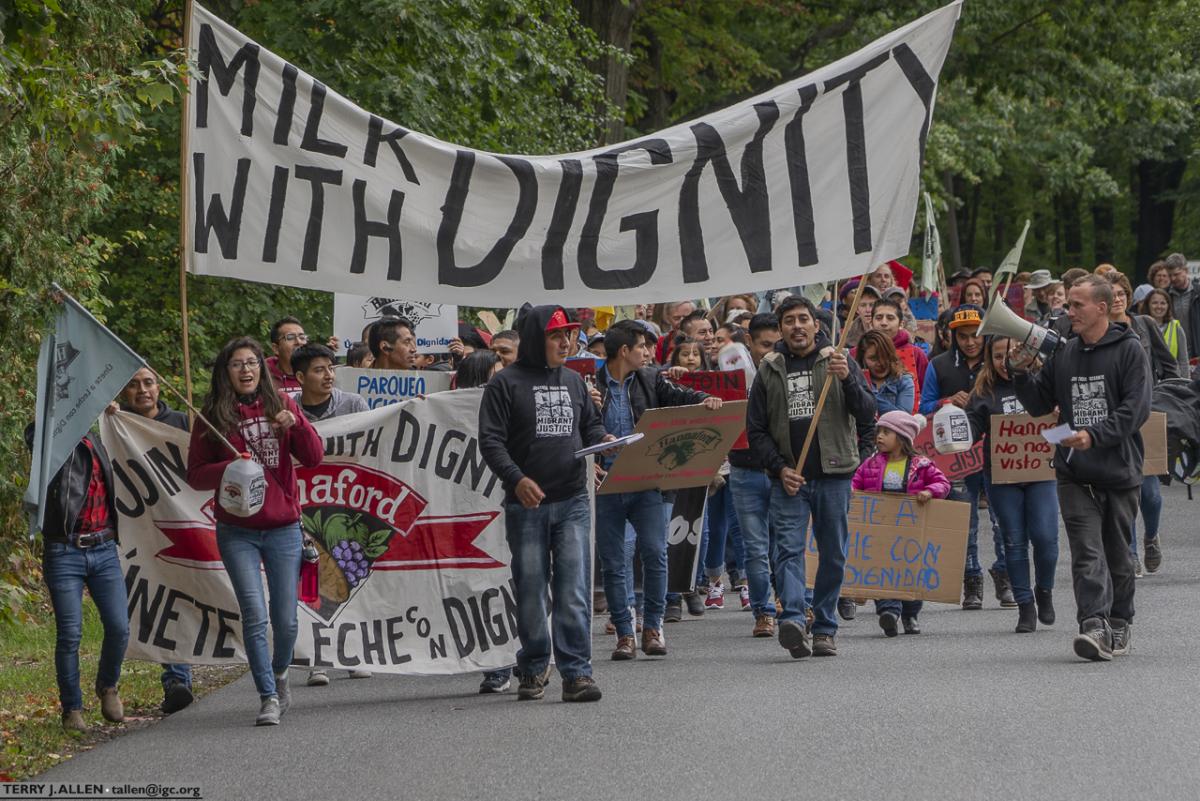