In the face of the unprecedented division, fear, and hatred surrounding the Trump election, Migrant Justiceleaders, like Enrique Balcazar, are calling for unity and solidarity: 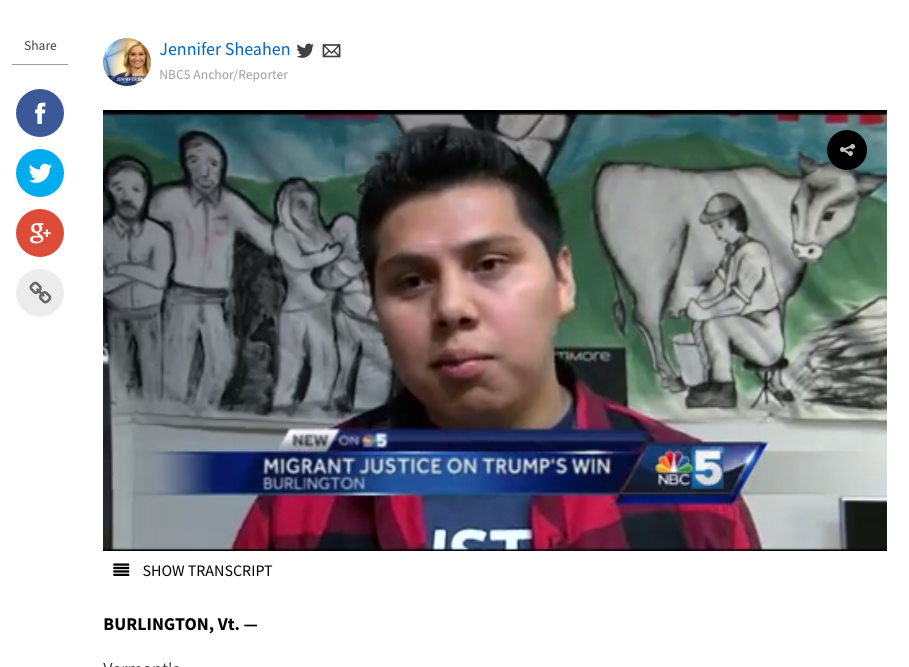 Said Enrique Balcazar, former dairy worker and organizer with Migrant Justice: “Our community has always suffered from oppression for the simple act of daring to survive, and we have always fought back.  Trump’s election as President makes this oppression more evident than ever. We are all affected when one community is attacked and criminalized.  It’s time for us all to come together to confront this new reality, united against fear.”

Said David Diaz, dairy worker and member of Migrant Justice’s Farmworker Coordinating Committee: “Now more than ever we must unite in the struggle for justice.  If Trump carries out his election promises, it would forever change the United States.  As a community we have achieved great things.  Together we can fight to achieve much more.”

There are approximately 1,500-2,000 immigrant farmworkers in Vermont, forming the majority of the workforce in the state’s iconic dairy industry.  Migrant Justice formed in 2009 following the death of a young immigrant dairy worker in Franklin County to organize for human rights and economic justice.  The organization has successfully campaigned to pass a 2013 law allowing immigrant workers access to driver’s licenses and to enact a 2014 Fair and Impartial Policing law to reduce racial profiling and collaboration between police and federal immigration authorities.