Join Migrant Justice on June 20th to demonstrate to Ben & Jerry's the growing support across the country for farmworker's call for Ben & Jerry's to join the Milk with Dignity Program!  Everything you need to know about the action will be kept up to date here.

Migrant Justice to Ben & Jerry's: "History has shown us that corporation’s promises of good will, particularly those that involve worker’s rights, must be written down in binding and enforceable agreements with workers. Ben & Jerry’s expects business partners to sign contracts.  Why should workers expect anything less?"

Burlington, VT. June 9th--Vermont dairy farmworkers had a much anticipated meeting with Ben & Jerry's social mission department ready to break new ground inviting Ben & Jerry's to stand up for the human rights of farmworkers in their supply chain by joining the Milk with Dignity Program.

Migrant Justice provided an in-depth overview of this Worker-Driven Social Responsibility (WSR) program, modeled after the Fair Food Program in Florida, demonstrating how the 5 essential elements of their proposal work together to ensure farmworker's rights are secured in Ben & Jerry's supply chain. After a productive dialogue about each element farmworker leader Victor Diaz asked for action:

"Will Ben & Jerry's stand up for the fundamental rights of the human beings that milk the cows in your supply chain by negotiating an agreement with Migrant Justice?"

Farmworker leader Enrique Balcazar explains that Ben & Jerry's wasn't wild about one of the 5 essential elements of the Milk with Dignity Program--a legally binding contract between Migrant Justice and Ben & Jerry's that will create an enforceable legal framework for the entire program:

"Ben & Jerry's says they agree with much of our proposal but they weren't yet willing to turn those words into a concrete commitment by negotiating a legally binding agreement with farmworkers to ensure our rights are protected.  We remain hopeful and believe Ben & Jerry's can and should do this. That is the message we will deliver across the country to Ben & Jerry's scoop shops on June 20th for our national day of action." 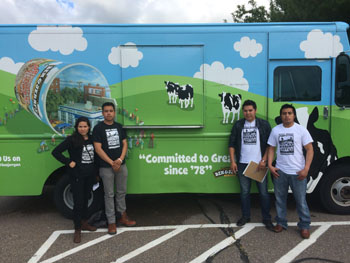 History has shown us that corporation’s promises of good will, particularly those that involve worker’s rights, must be written down in binding and enforceable agreements. Ben & Jerry’s expects business partners to sign contracts.  Why should workers expect anything less?

By not demonstrating a willingness to sign an agreement with workers Ben & Jerry’s has thus far been treating the human rights of workers as something less than a real commitment, something less than real business. It's time they made the same commitment to the human rights of workers in their supply chain -- the people who supply the labor they need to make the products they sell -- as they do to all their other business partners.  Until human rights stops being treated as a voluntary endeavor and starts being treated as an essential business concern, there will be no real enforcement, no real compliance, and no real rights.

And just like all their other suppliers, dairy farmworkers have an agreement to make with Ben & Jerry’s, it must be bilateral—between farmworkers and Ben & Jerry's.

So join Migrant Justice and our allies across the country to call on Ben & Jerry's to join the Milk with Dignity Program!