#TimesUpWendys: Put an End to Sexual Violence in the Fields

For generations, farmworker women have endured some of the most hostile working conditions this country has to offer.  Farmworker women have referred to the constant barrage of catcalls, groping, and sexual assault as “our daily bread” in the fields., In one study, four out of every five farmworker women reported experiencing sexual harassment or violence at work.

But in 2011, after nearly two decades of hard-fought organizing with consumers across the country, farmworker women and men with the Coalition of Immokalee Workers (CIW) launched the Fair Food Program (FFP) and, within a few short years, put an end to sexual assault and other human rights violations in the $650 million Florida tomato industry.  Today, the FFP extends to seven states and three crops, and all the major fast-food companies – McDonald’s, Burger King, Subway, Taco Bell, KFC, and Chipotle – are on board.

For years now, Wendy’s has totally ignored Florida farmworkers’ and consumers’ persistent calls to join the world-renowned Fair Food Program and join the rest of the fast food industry in protecting the fundamental human rights of farmworkers in its supply chain. So in response, yesterday Florida farmworkers and allies across the nation kicked off a 5-day “Freedom Fast”​. Right now​, Migrant Justice member and dreamer Martha Herrera is in New York City outside the hedge fund office of Nelson Peltz, Wendy's largest shareholder and board chair, fasting in solidarity with dozens of Florida farmworkers and fair food allies demanding Wendy's join the Fair Food Program.

Martha reflects on her motivation, “As a woman, as a member of Migrant Justice, and as a dreamer I am participating in the #FreedomFast for 5 days, to unite our voice with my compañeras from the Tomato industry. Something that really impacted me when I visited Immokalee was to see how the women’s community is so strong and for me this deeply inspired me because in most industries we women have no voice and no power.”

Pictured below: Dreamer Martha Herrera, currently fasting in New York, marching in Migrant Justice's Milk with Dignity Campaign inspired by the work of the CIW 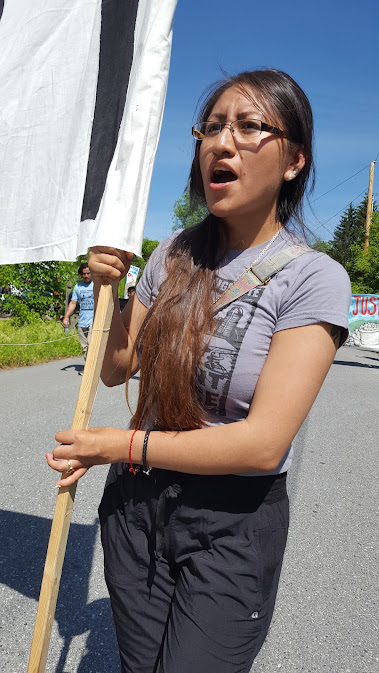 As Martha recalls, Migrant Justice members were inspired to build the Milk with Dignity Program, after witnessing first hand the transformational impact of the Fair Food Program.  “Throughout the past 4 years of ongoing worker-to-worker exchanges between Vermont and Florida we learned a ton about how the farmworker community in Immokalee has organized, its history and also the tools they use to unite more compañerxs to join the struggle. This is excellent for us because we can bring these ideas back to Vermont to continue to develop them in our context.”

Kicking off the Fast on Sunday in New York

Right now Martha is outside the Manhattan hedge fund offices of Nelson Peltz, Wendy’s largest shareholder and Chair of its Board of Directors.  The fast demands that Wendy’s join the rest of the fast-food industry in supporting the Fair Food Program groundbreaking worker protections, and will protest the ongoing human rights abuses faced by workers in Mexico’s produce industry where Wendy’s currently sources its tomatoes. The Freedom Fast culminates with a massive march on March 15 in the heart of Manhattan.  Migrant Justice will be there on the 15th with a delegation of Vermont farmworkers and allies in solidarity with our Florida farmworker sisters and brothers and we hope you will join in too!

Can’t make it to NYC?  Take a few minutes from wherever you are for these solidarity actions.