Photo-report from Milk with Dignity picket!

The event was livestreamed on Migrant Justice’s facebook page. Head there to watch the action as it unfolded and hear the inspiring speeches from farmworkers and allies!

Diego, a farmworker, spoke at the rally:

“We’re here to call on Hannaford to respect our rights as workers. My family suffered violence from a supervisor on my farm, and we were fired when we tried to speak out. This violence and retaliation has changed our lives. It’s time for Hannaford to join Milk with Dignity, to stop these abuses from occurring.”

Check out the photos and read more about the recent action below: 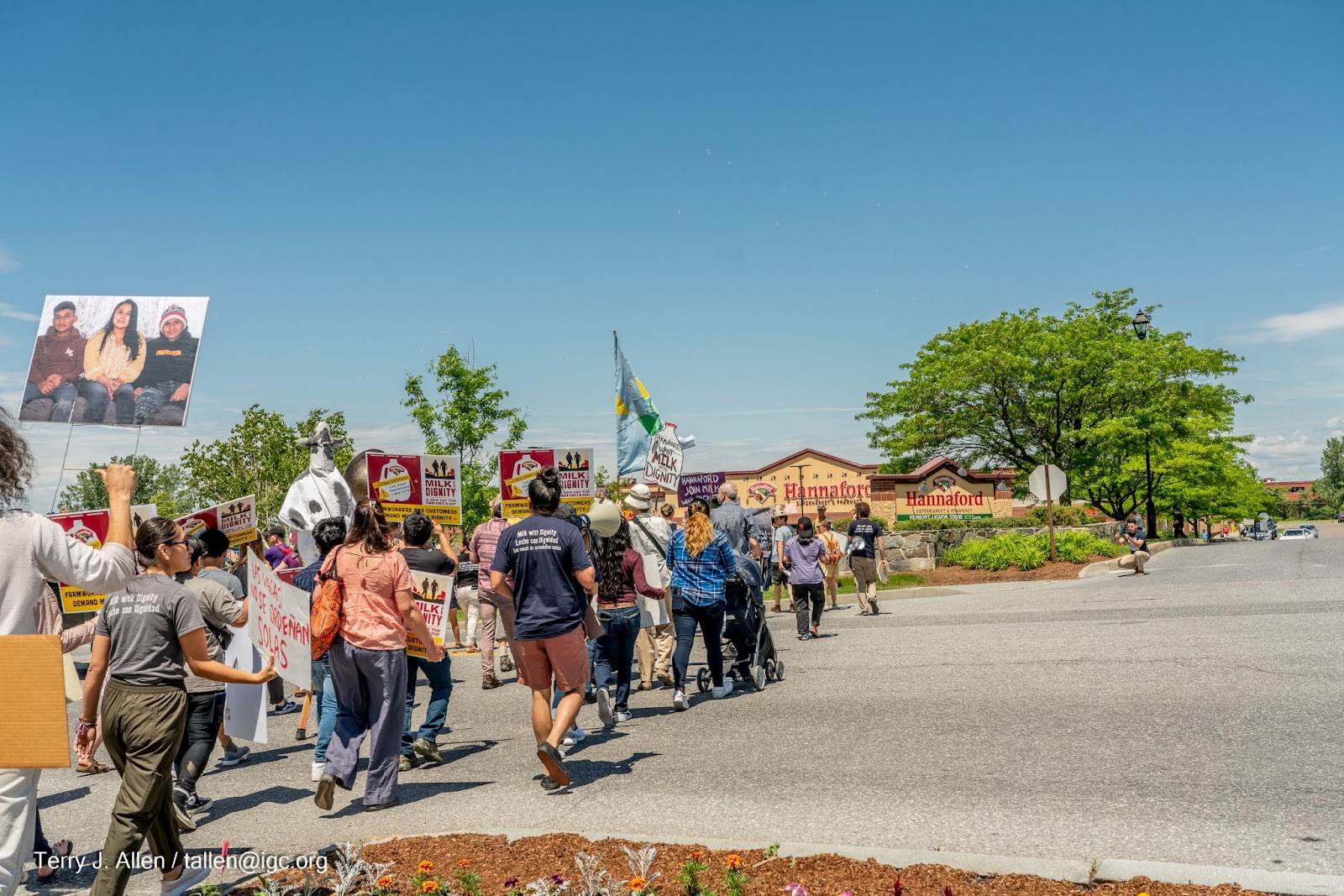 After assembling nearby, over 100 farmworkers and allies marched to the Hannaford in Williston 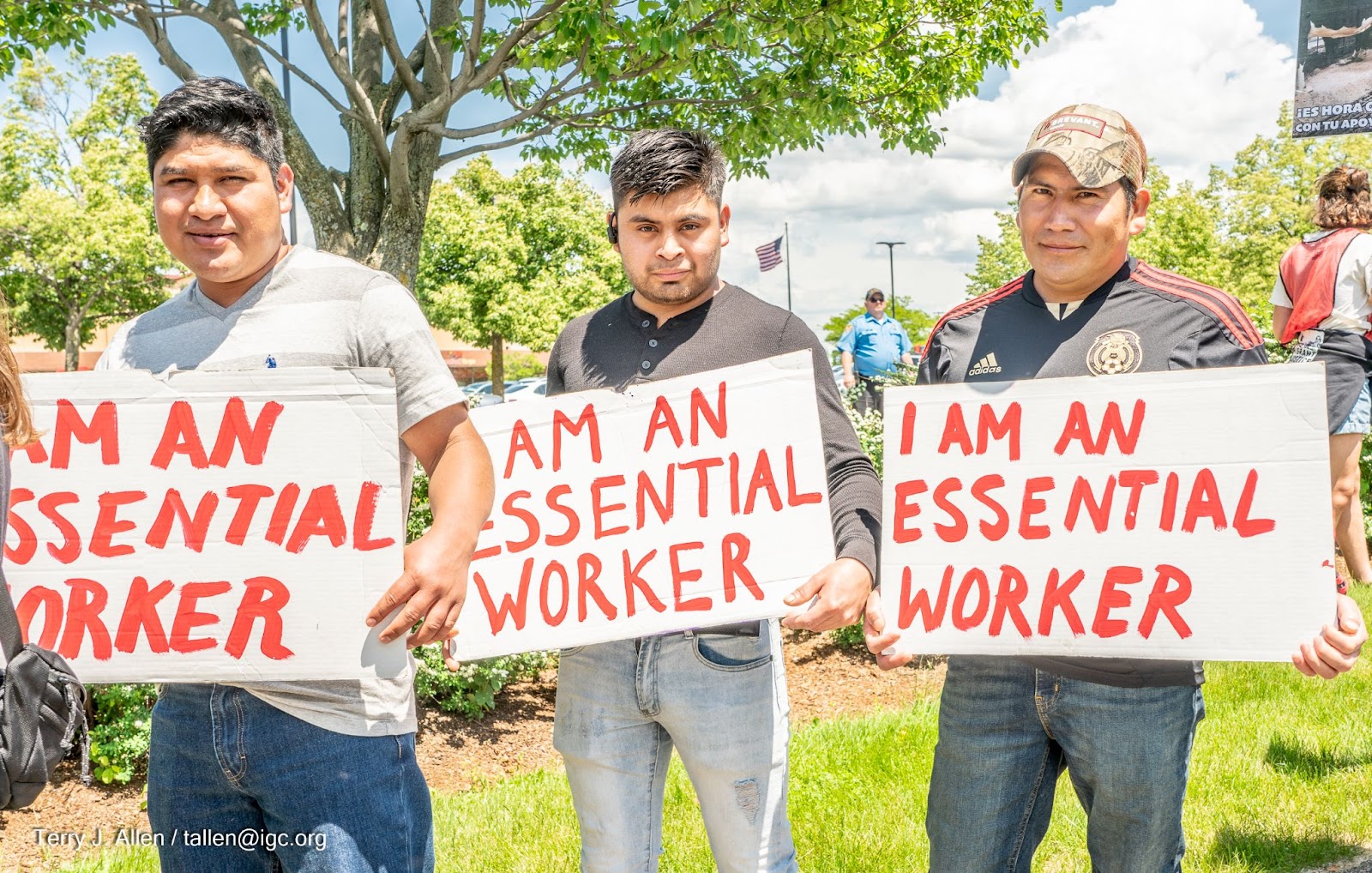 Farmworkers turned out in force from all over Vermont. Workers average 60-80 workweeks, oftentimes without a day off, meaning that many workers missed their sleep shift in order to take part in the action. 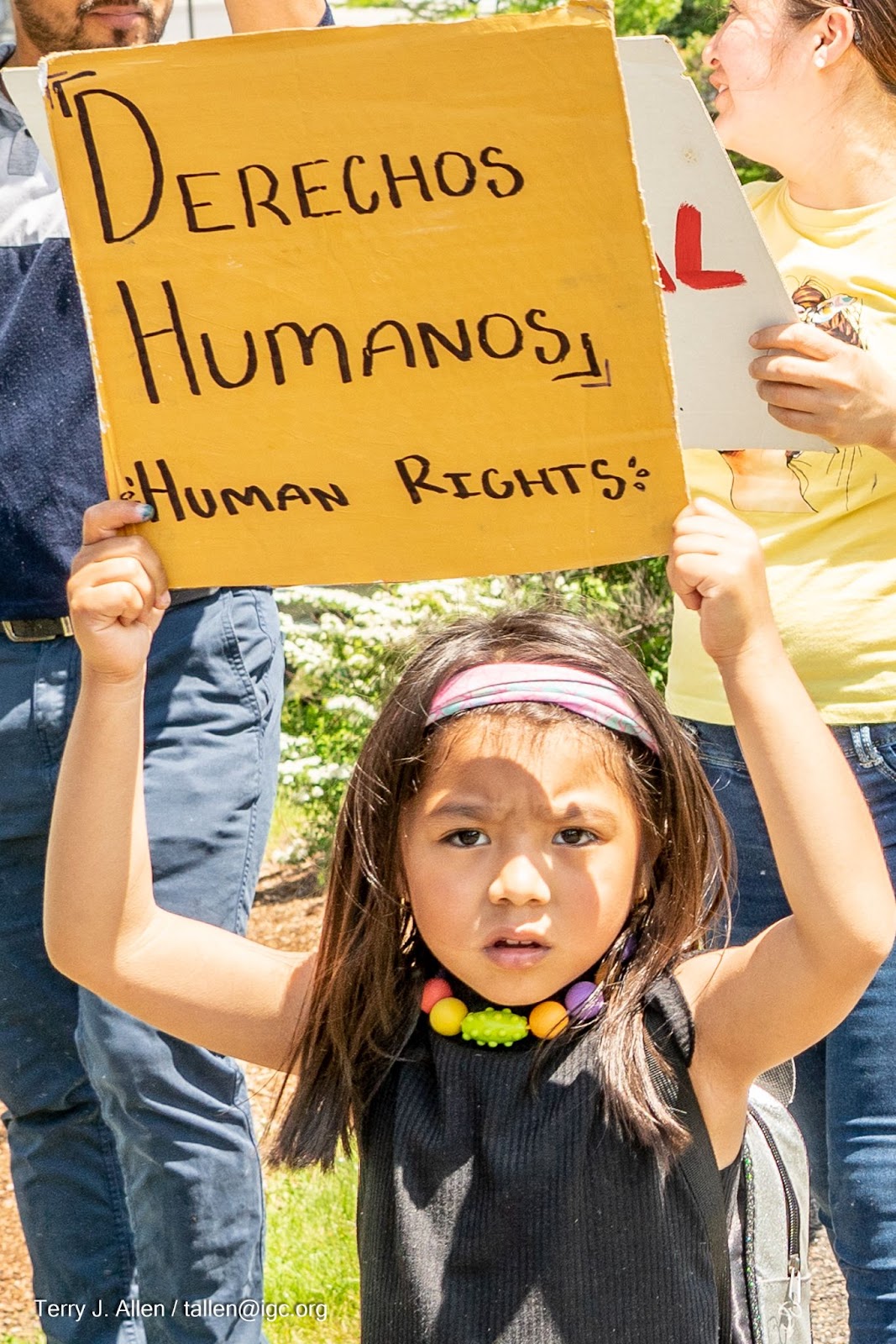 The protest was a family affair, with farmworkers and allies bringing their while families to support Milk with Dignity 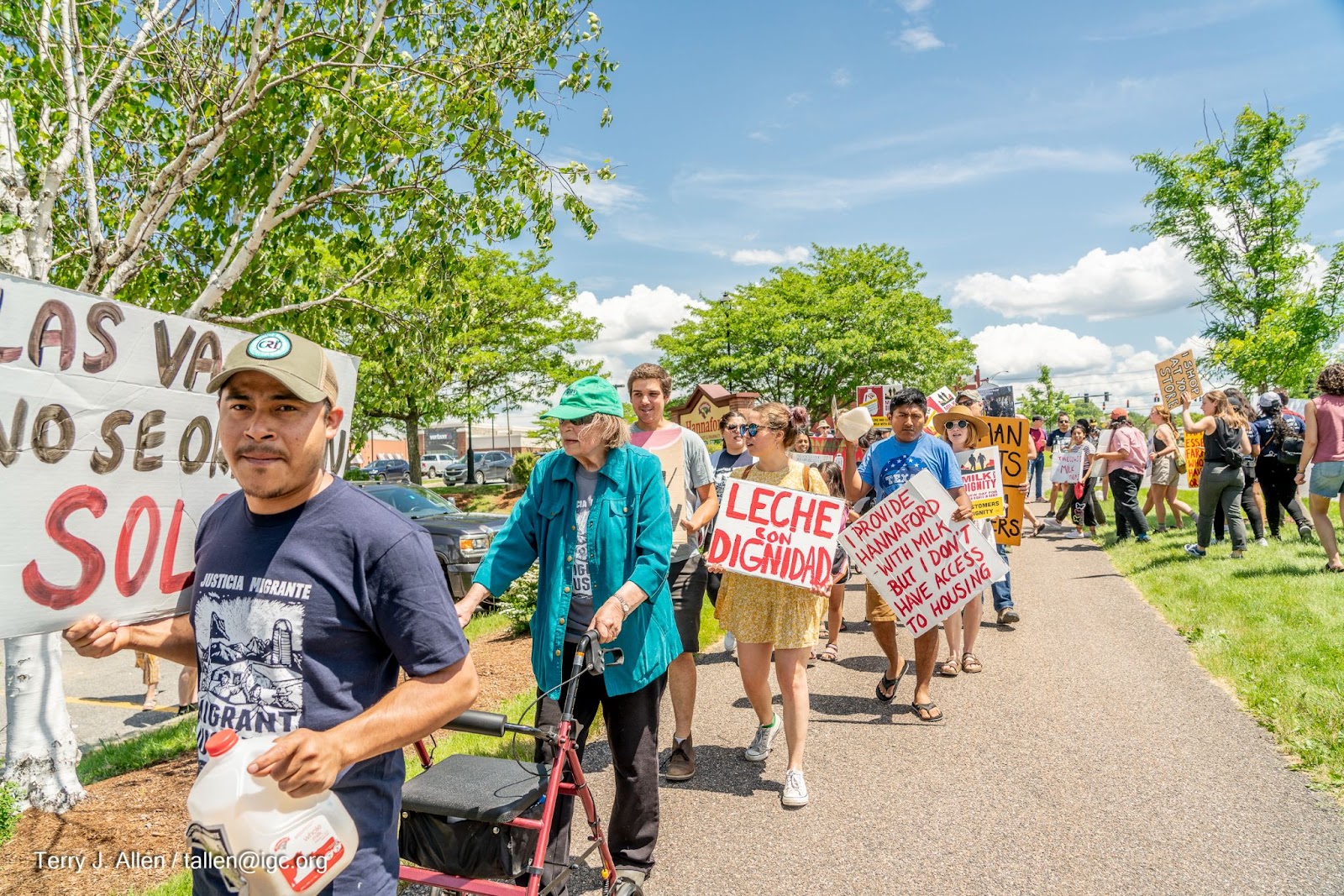 Marchers set up a picket line in front of the store, chanting “Hannaford, listen up! Farmworkers ain’t giving up!” 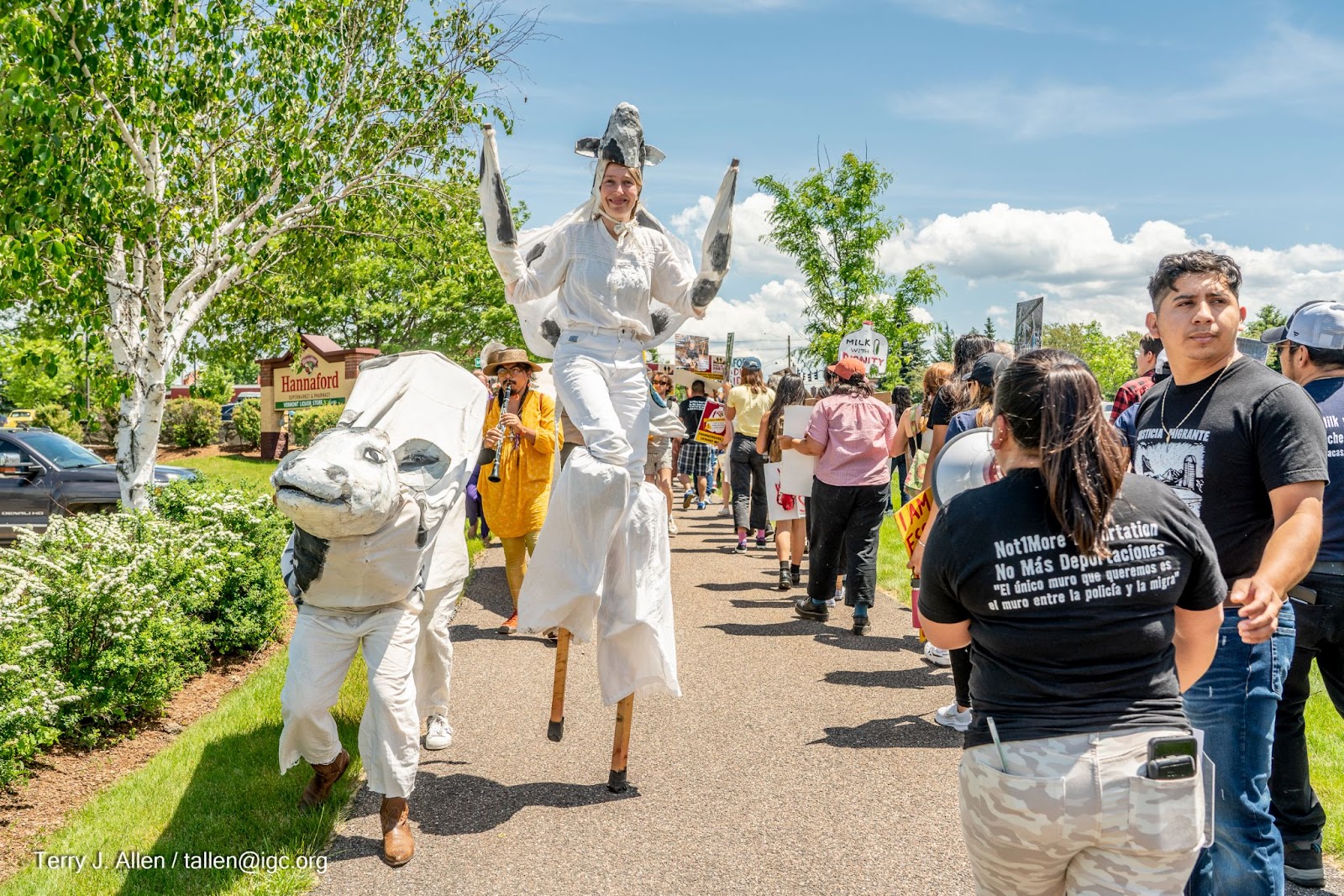 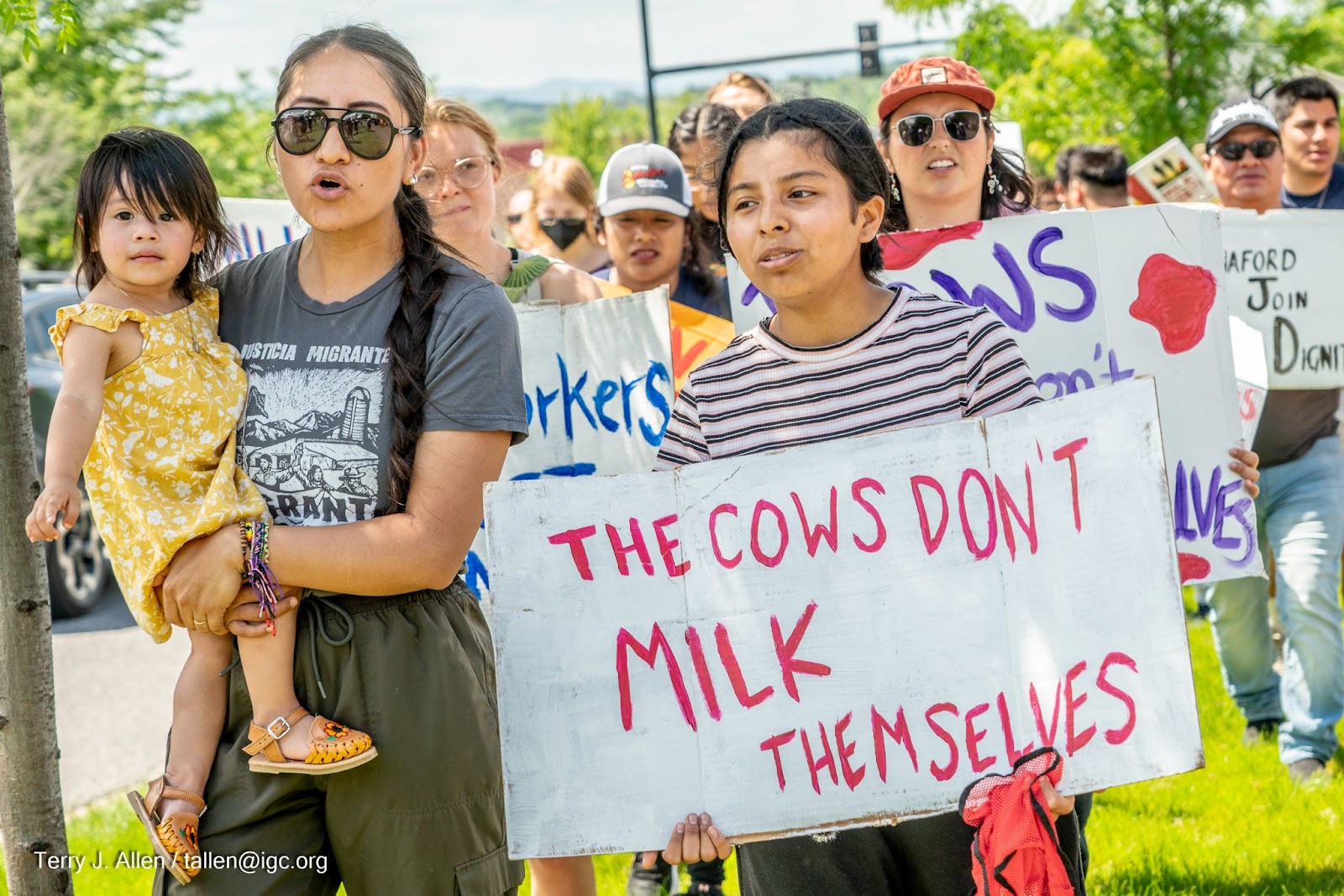 “Get up! Get down! Milk with Dignity is coming to town!”

Following the picket, we held a brief speaking program, using a wall around Hannaford’s sign as a makeshift stage 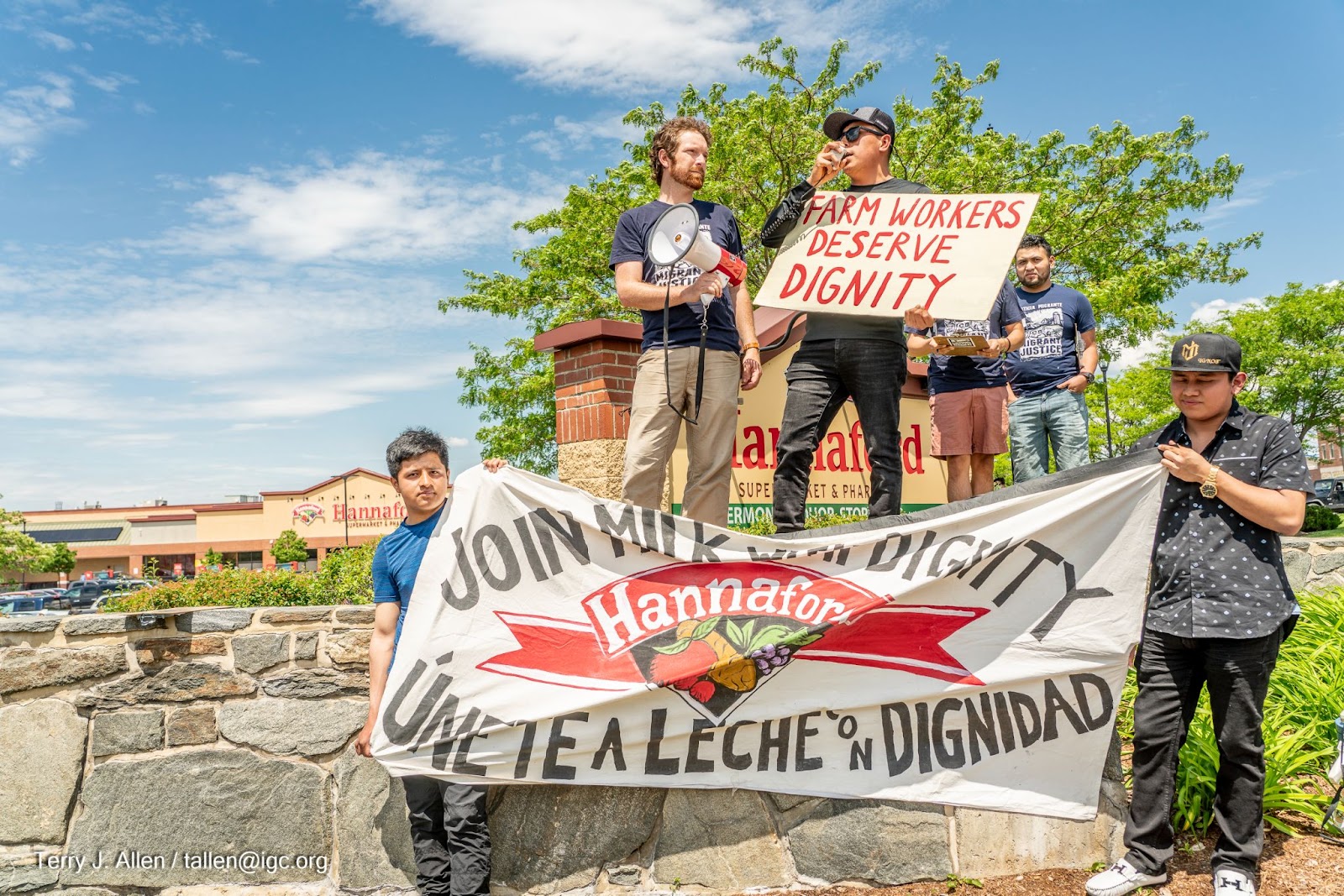 Diego addressed the crowd first, talking about the physical abuse that his family suffered from a supervisor on their farm and telling the crowd how his family was fired for denouncing the violence 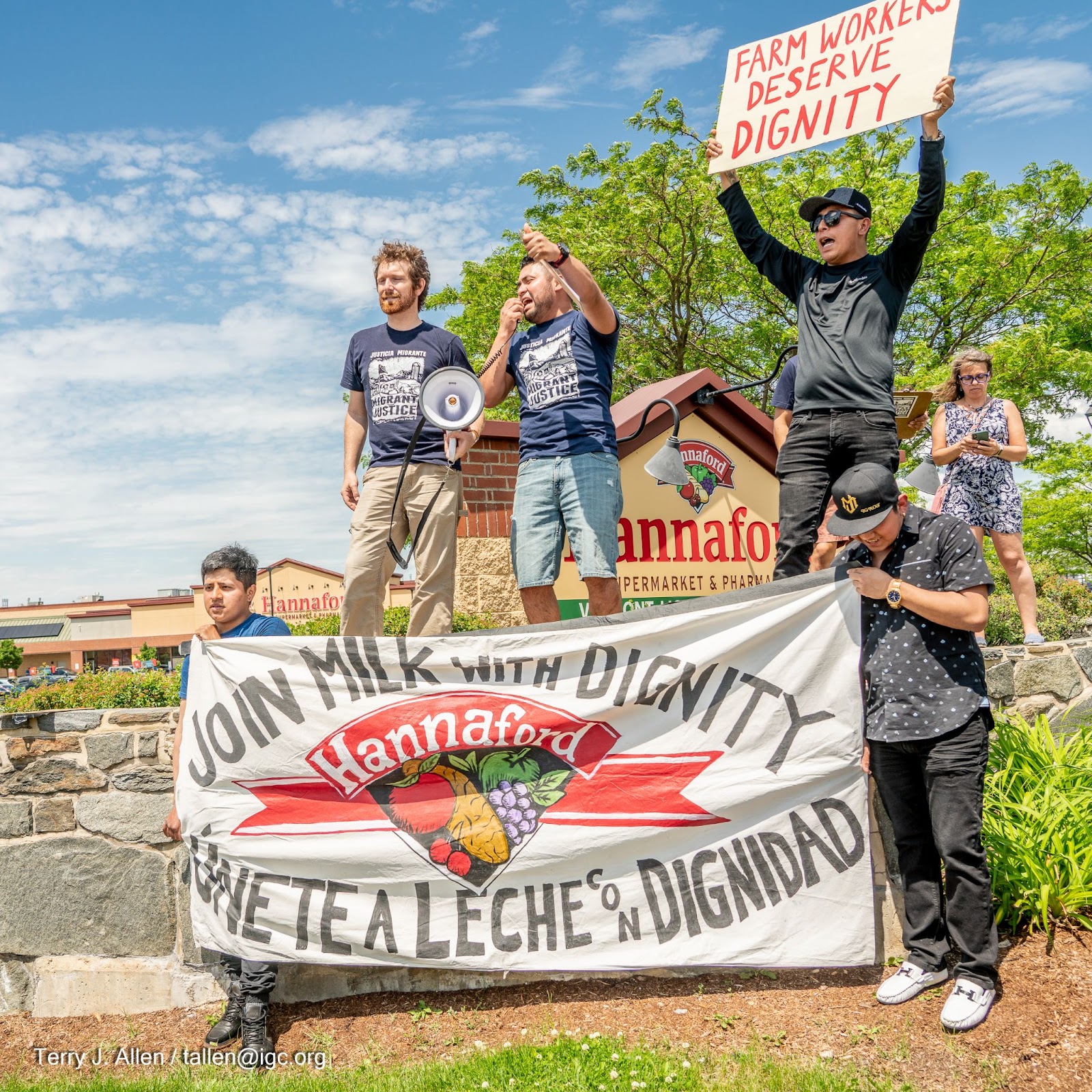 Rubinay followed, telling the crowd about the benefits of working on a Milk with Dignity farm. Rubinay spoke about how Milk with Dignity protects workers rights, contrasting workers’ experiences of the pandemic inside and outside the program. While many workers have had to work while sick with Covid or have been fired for reporting symptoms, Rubinay used the program’s guarantee of paid sick leave to take the time he needed to recover, without losing money from his paycheck. 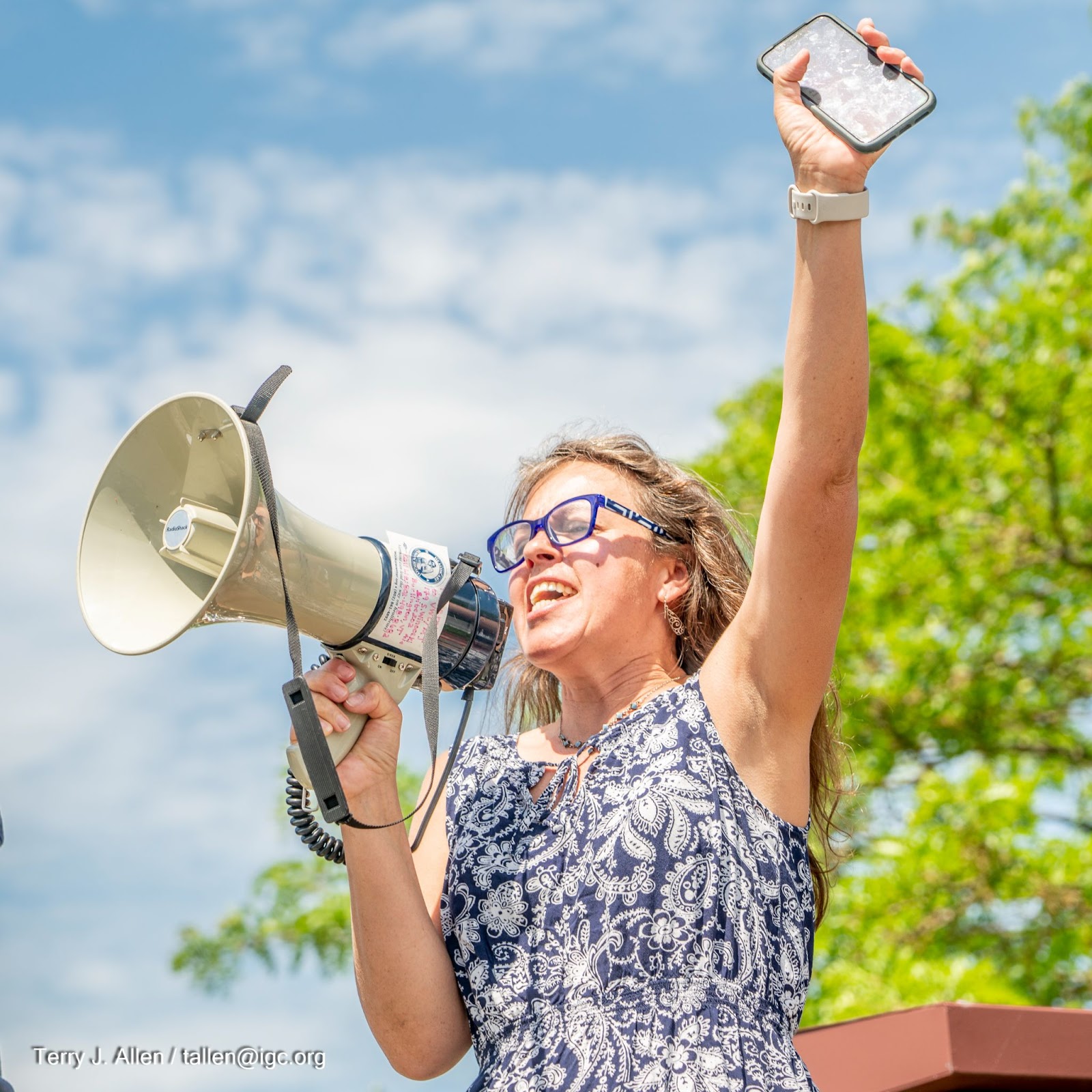 The final speaker was Amanda Garces, with the Vermont Human Rights Commission. Amanda rallied the crowd with a strong message of support from the government agency. Her strong testimony also called into question Hannaford’s claims of “due diligence” investigations, as she pointed to the strong barriers for workers to report abuses to corporate auditors. 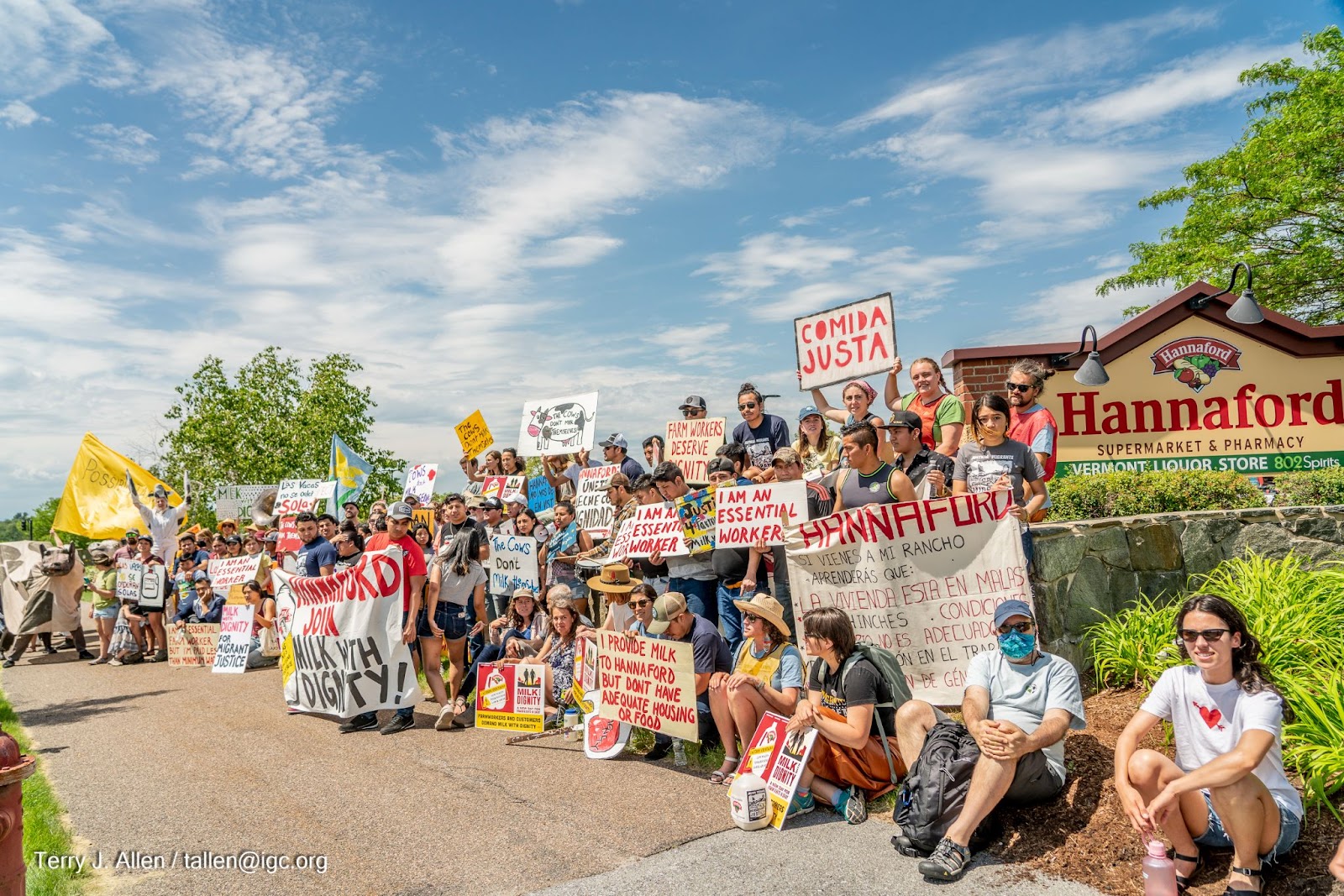 Before heading home, farmworkers and consumers gathered for a group photo, showing their collective power and commitment to hold Hannaford responsible and push them to do the right thing 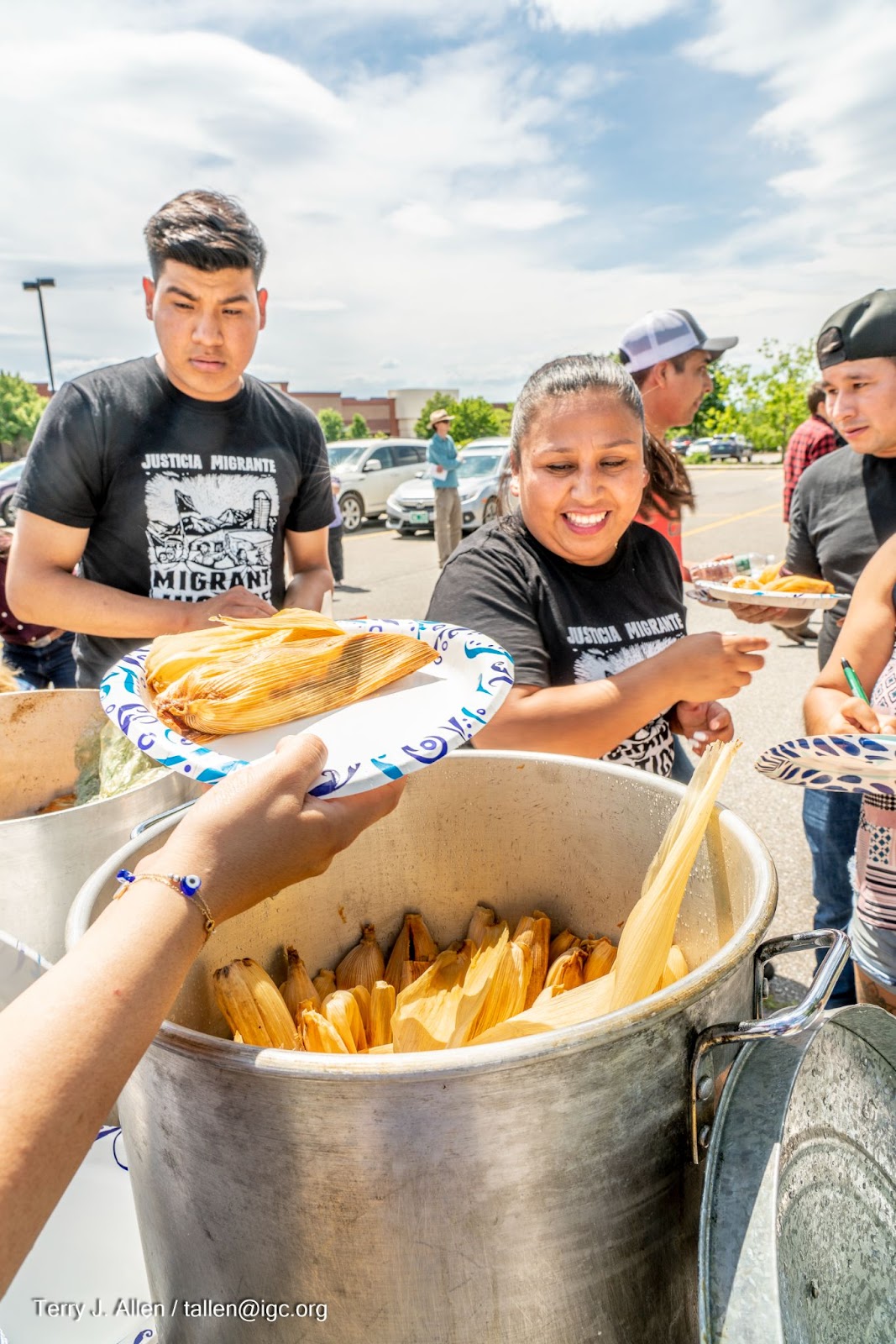 Of course, it wouldn’t be a Migrant Jusice action without some home-cooked tamales at the end. After a hot day marching and picketing under the beating sun, folks headed home to get some rest, promising Hannaford: “We’ll be back!

Want more photos? Check out the full album from the day on Migrant Justice's facebook page!