Milk with Dignity: From CA to VT! 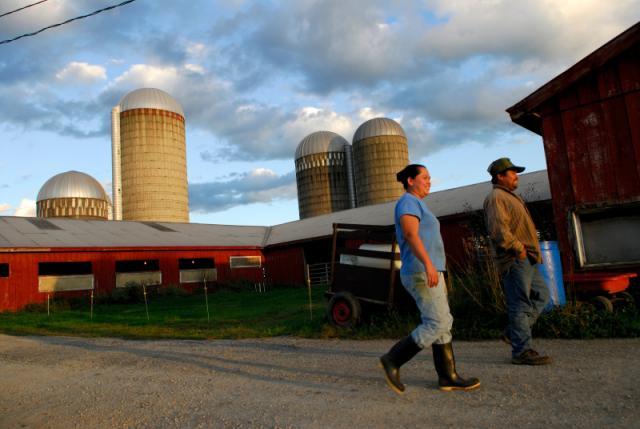 Migrant Justice is hitting the road this week, traveling from coast to coast, connecting with a rapidly growing fair food movement hungry for the expansion of worker-led solutions to secure human rights in the food system. From Stanford University to the huge annual gathering of the Northeast Organic Farmer Association (NOFA) Vermont conference, Migrant Justice’s Milk with Dignity Program will be showcased over the next couple days as an effective response and solution to the growing realization that any sustainable food system must be built on a firm foundation of farmworkers’ human rights.

The fair food movement is on the rise, and with it, a growing refusal to allow the corporations that make a living off of the grueling labor of farmworkers and farmers to continue turning a blind eye to abuses in their supply chains. Thus, for Stanford student activists like Emma Hartung from Stanford's Student And Labor Alliance (SALA), the event she is helping to pull together on Thursday is more than just an educational event. It’s about accountability:

“SALA works to build solidarity between students and worker-led movements. So, when we heard that Ben & Jerry’s CEO Jostein Solheim was invited to speak at Stanford this Friday and we discovered that it’s been nearly two years since B&J’s made a public commitment to join Migrant Justice’s Milk with Dignity Program, we thought it was only fair for the Stanford community to also hear directly from Vermont dairy workers who put the cream in B&J’s ice cream.”

Over the coming days a diversity of organizations including the Stanford University’s Student and Labor Alliance (SALA), Pilipino American Student Union (PASU), First-Gen and/or Low-Income Partnership (FLIP), Students for a Sustainable Stanford (SSS), Stanford Asian American Activism Committee (SAAAC), Stanford Educational Farm and hundreds of farmers and food activists all over New England will come together to learn about and build support for this Vermont dairy worker-led solution to secure human rights in corporate supply chains.

Join Migrant Justice this Thursday at Stanford (here and share on facebook) and again on Saturday at Vermont’s annual Northeast Organic Farming Association (NOFA) conference to learn how Vermont dairy workers are flipping the script on “Corporate Social Responsibility” (CSR) with the Milk with Dignity Program--a “Worker-Driven Social Responsibility” initiative (WSR) adapted from and designed in partnership with the world-renowned Fair Food Program (FFP) of the Coalition of Immokalee Workers (CIW).

“On my farm, the hours were long, they didn’t even pay minimum wage, and there was no day off.  We lived in a house without heat, where sometimes the water ran out… So, today we are organizing ourselves to shift the power...because it doesn’t matter which part of the world we come from--we have rights.” -Thelma Gomez, President of Migrant Justice’s Farmworker Coordinating Committee (More from Thelma in this video) Migrant Justice got its start back in 2009 after an 18-year-old indigenous worker, José Obeth Santiz Cruz, from Chiapas, Mexico got entangled in a chain driven machine belt gutter scraper that lacked the proper safety protections. Jose’s clothes were caught in the belt and he was pulled in and strangled to death by his own clothing.  This tragedy -- which took place on a Vermont farm whose milk is bought by  Ben & Jerry’s -- was the spark that led to the creation of Migrant Justice. Migrant Justice organizes in the community of 1200-1500 immigrant farmworkers in Vermont and gathers the farmworker community to discuss and analyze shared problems and envision collective solutions. From this basis, our members have prioritized building a movement to secure the fundamental human rights to work with dignity and freedom from discrimination. The majority of Vermont farmworkers, and of Migrant Justice’s members, labor in the state’s iconic dairy industry.

Vermont’s dairy industry is in severe distress.  Corporate globalization and monopolization of agriculture drives down the price of milk, often below farmer’s costs of production, which means farmers spend more than they get back!  And yet corporations continue to reap enormous profits at one end of the dairy supply chain, while at the other end, over 100 Vermont dairy farms have gone under in the past 5 years, and many of the approximately 850 dairy farms that remain are heavily mortgaged and operating on razor-thin margins.

And, of course, all this downward pressure doesn’t stop at the farmer. It has clear impact on farmworkers’ wages and working conditions. In the summer of 2014, Migrant Justice surveyed 176 farmworkers, over 10% of immigrant dairy workers in the state, finding: * 16% have less than 8 hours (in a row) to sleep due to work schedules and 16% have to sleep on the living room sofa due to overcrowded housing;

*  9% say they have been verbally abused by their employer

On top of this, dairy farms are among the nation’s most dangerous workplaces. For example, the N.Y. State Department of Health reports 61 fatalities on New York dairy farms from 2006 to 2014 alone.  These life and death challenges and systemic exclusions brought Vermont dairy workers all the way to Florida to look for a solution to their problems, and thankfully, they found it.A series of farmworker-to-farmworker exchanges with Florida’s Coalition of Immokalee Workers (CIW) opened Vermont workers’ eyes to the transformative power of the Worker Driven Social Responsibility (WSR) model that fuels the CIW’s highly acclaimed Fair Food Program (FFP). Migrant Justice has since engaged in an in-depth collaborative process with the CIW and FFP to envision and then design the Milk with Dignity Program. We are now inviting corporate buyers of milk to take the lead in the dairy industy by sourcing their dairy in a way that ensures workers’ rights are secured in their supply chains!

Farmworkers’ journey to design the MD Program has included an in-depth study and analysis of the unfair market conditions that place a very real squeeze on dairy farmers. Thus, one of the 5 essential elements of the Milk with Dignity Program requires participating buyers (dairy corporations) to pay a premium to participating farms that pledge to work towards compliance with the worker-defined MD Code of Conduct in order to alleviate the market’s downward pressure on conditions on the farm. Altogether, the 5 essential elements of MD Program are: 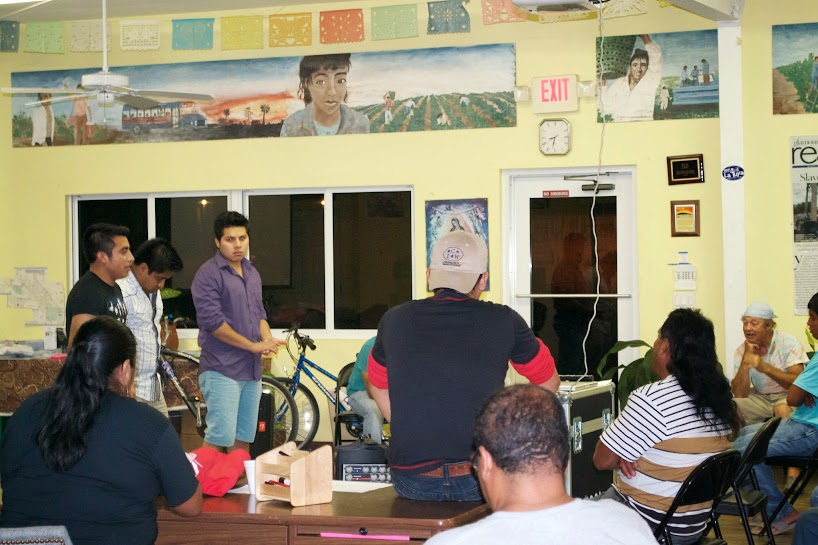 * Farmworker-Authored Code of Conduct: farmworkers’ definition of the human right to work with dignity and fair housing;

* Farmworker Education: Guarantees workers the right to receive education about their rights under the Code of Conduct;

* Economic relief: Participating corporations restore economic justice in the supply chain paying a premium that benefits both farmworkers and farmers;

* Legally-binding Agreements: Participating Corporations sign a legally binding agreement that defines the program as an enforceable contract under the law.

The MD Program is both proactive and preventative, partnering with farmers to achieve compliance with the MD Code of Conduct and to put in place workplace health and safety plans, trainings and policies to prevent the alarming deaths and injuries that are so commonplace in the dairy industry. We hope to see you at Stanford or at the NOFA conference to learn more and get the latest news and updates on the MD Program!