Give thanks to farmworkers – and their fight for human rights 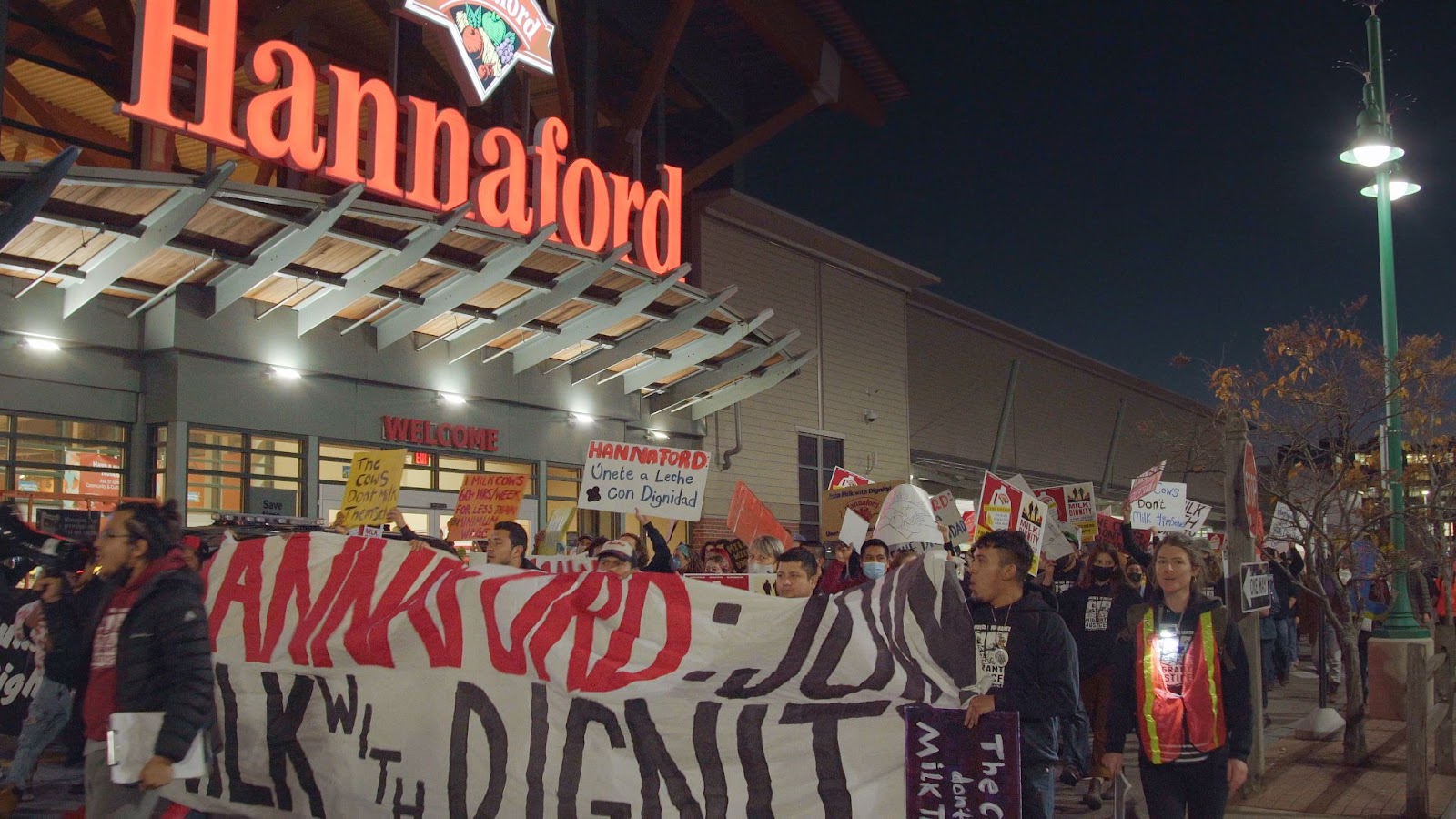 Fifty dairy workers filled a bus to travel to Portland to lead the action. Winding through the rush hour streets of Portland, marchers stopped at a Hannaford store and the H.P. Hood plant, which bottles Hannaford-brand milk. Supporters came from all over New England, many after learning about the campaign during a Dignity Tour presentation. The action was covered by Maine’s press on T.V., the radio, and online.

The action also made an impact on Mainers who saw the march passing by, including one Hannaford shopper who emailed us later in the day: "I happened to be at Hannaford in Portland, Maine today. You had a protest going by at the time. The store tried to keep us all inside until you passed but we followed a man out who said they can't do that. Until tonight I had no idea of all this going on. I am disgusted. Thank you for opening my eyes about the [farmworkers’] conditions."

The Maine March on Hannaford concluded with a stirring speech from Migrant Justice leader Thelma Gómez:

I know for many of you this is your first time at a Migrant Justice event, your first time coming out, hitting the streets to stand in solidarity with your farmworker siblings. And now that you’re here I want to ask you to take this as as personal responsibility, to understand that this fight for human rights is now yours too, it is all of ours, and that we need to fight together to make sure that nobody’s rights are violated and that the farmworkers behind Hannaford-brand milk have their rights and dignity respected. And so if Hannaford CEO Mike Vail is asking himself “Why are people marching tonight?” It’s because we’re fighting for our basic human rights and that’s what’s motivating us to come from all over the region, to travel across states, here to Hannaford’s backyard to say “We want Milk with Dignity!”

Heed Thelma’s call to make farmworkers’ fight yours, too. Thank a farmworker today by joining the Milk with Dignity campaign, starting with volunteering to drive calls on next Thursday’s Hannaford call-in action.

Check out this selection of photos from the Maine March on Hannaford. Many thanks to the photographers: John Willis (www.jwillis.net), Eli Hill, and Geoff Carens 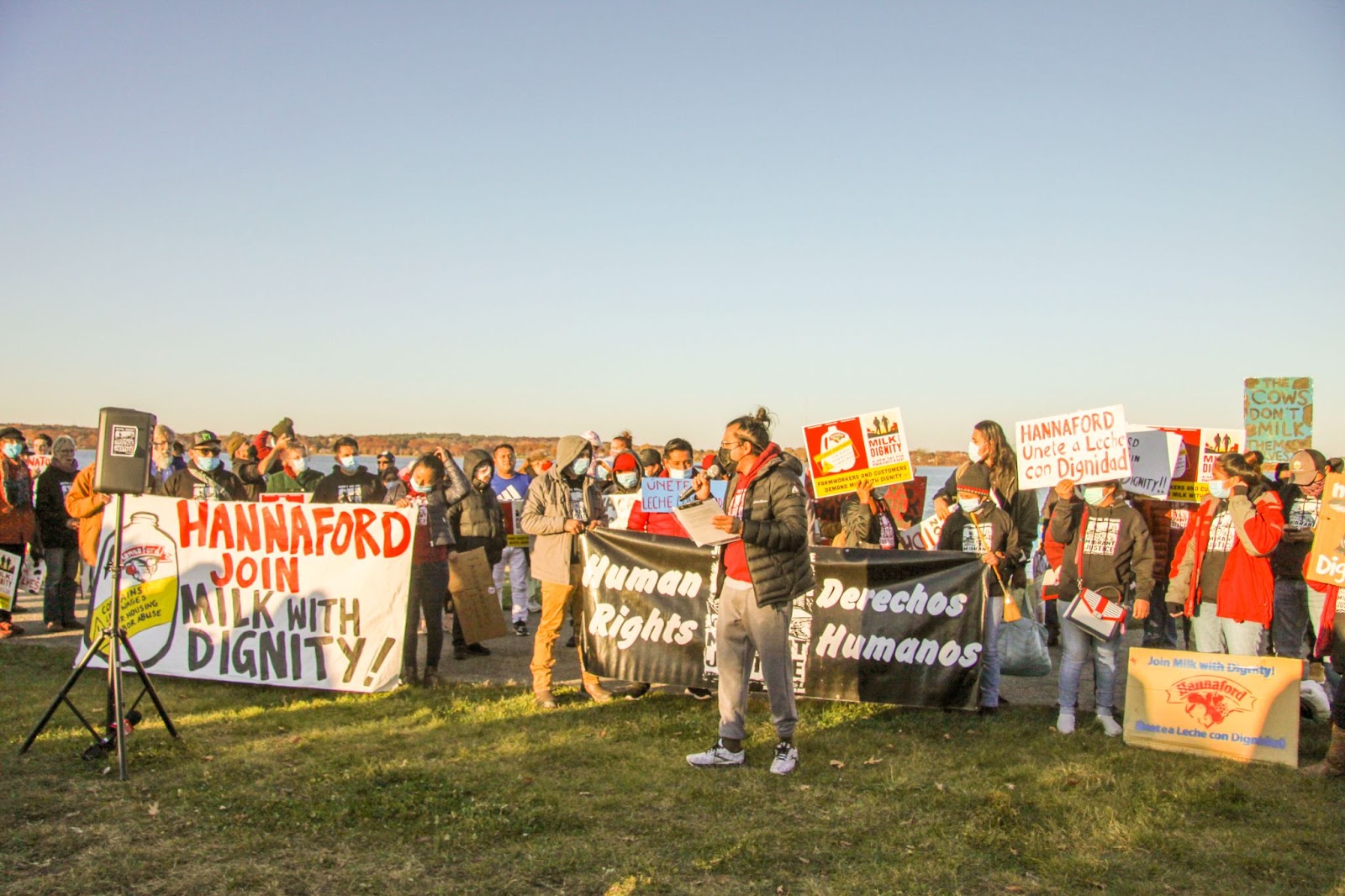 Marchers came from all over New England, meeting up in the Portland's Back Cove park 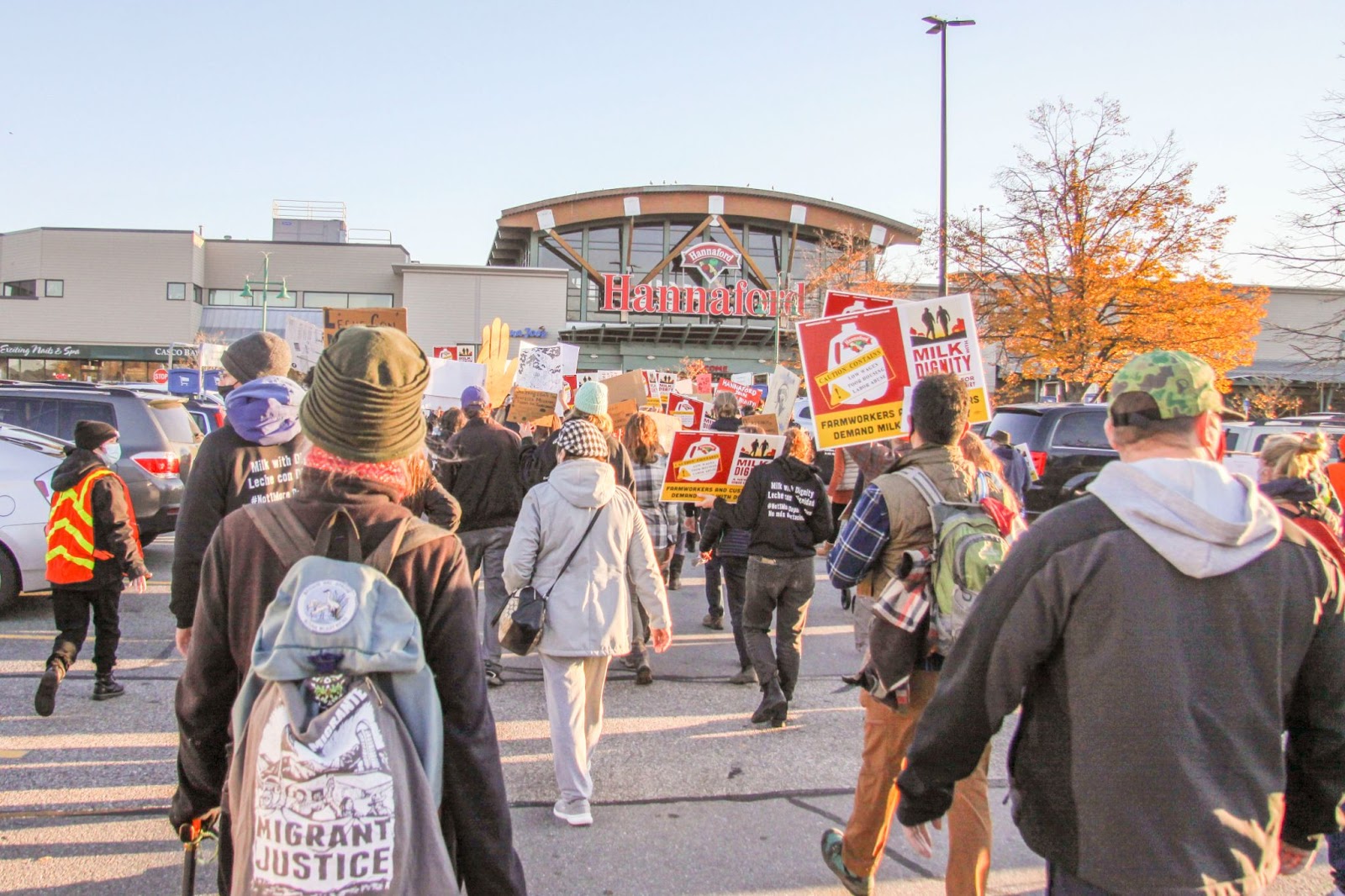 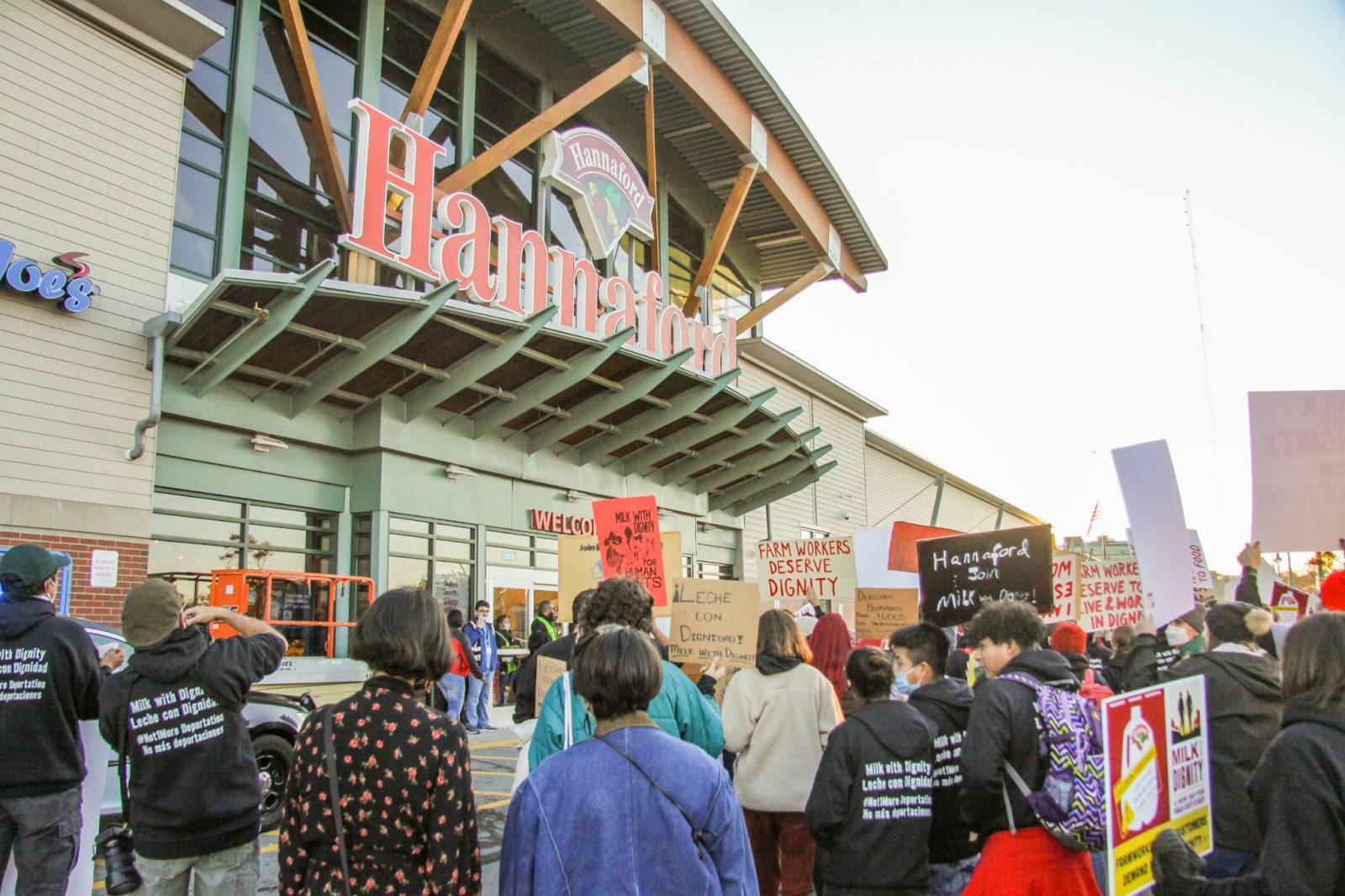 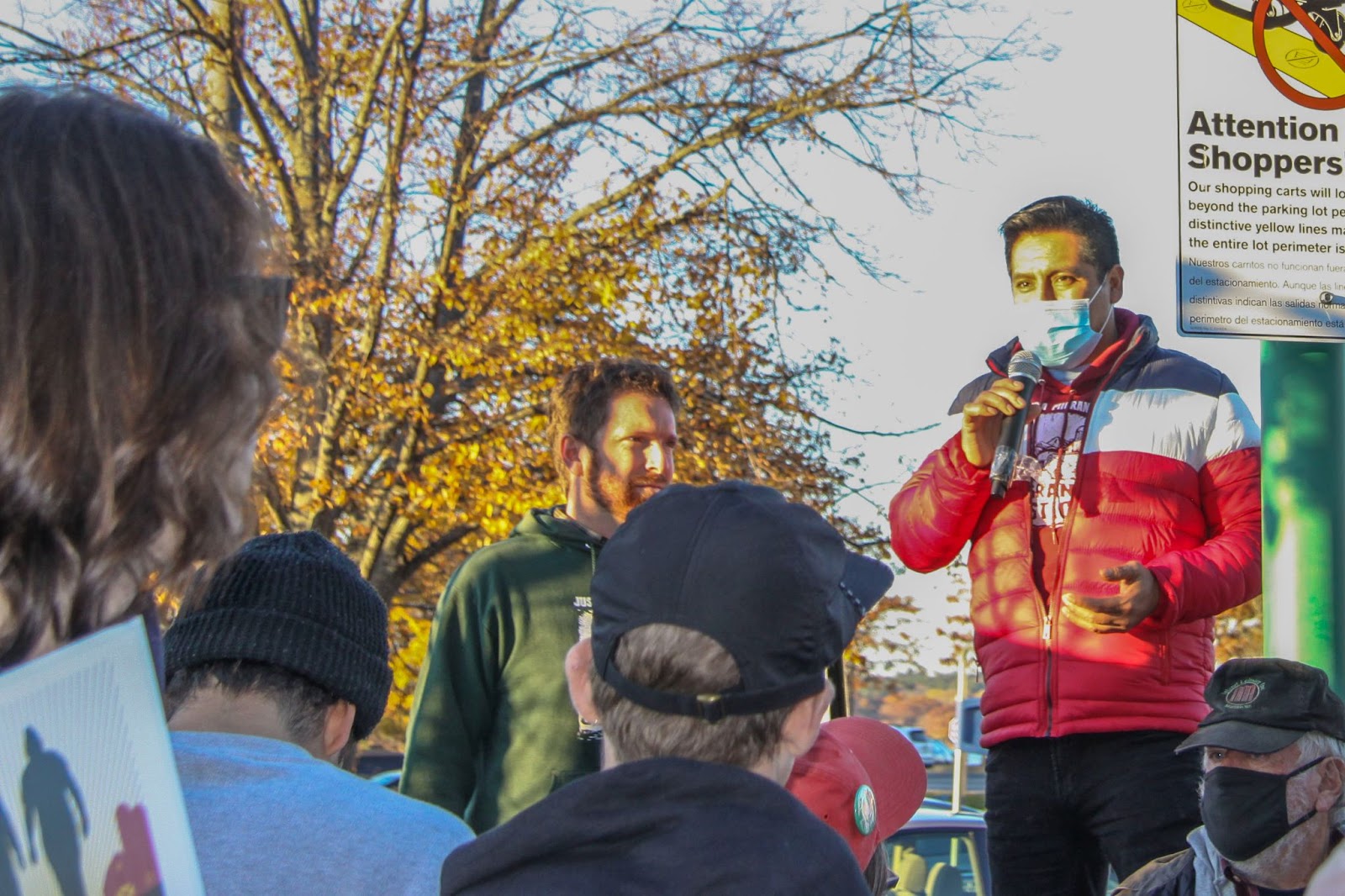 ...as farmworker leader Yobani Moreno addressed the crowd. Yobani works on a Milk with Dignity farm and urged Hannaford to join and help expand the program to cover more farms and farmworkers 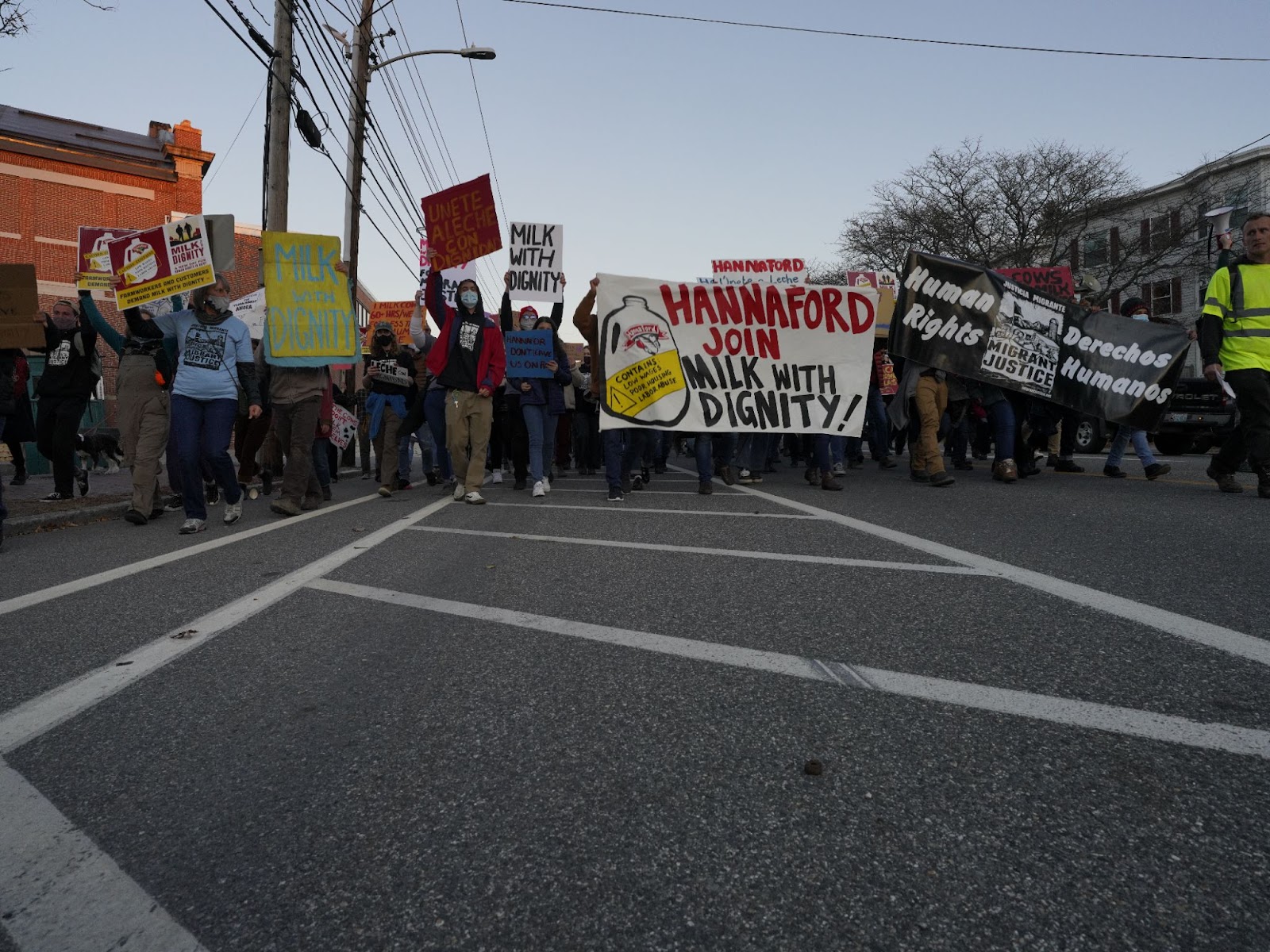 We hit the road again, marching through the campus of the University of Southern Maine 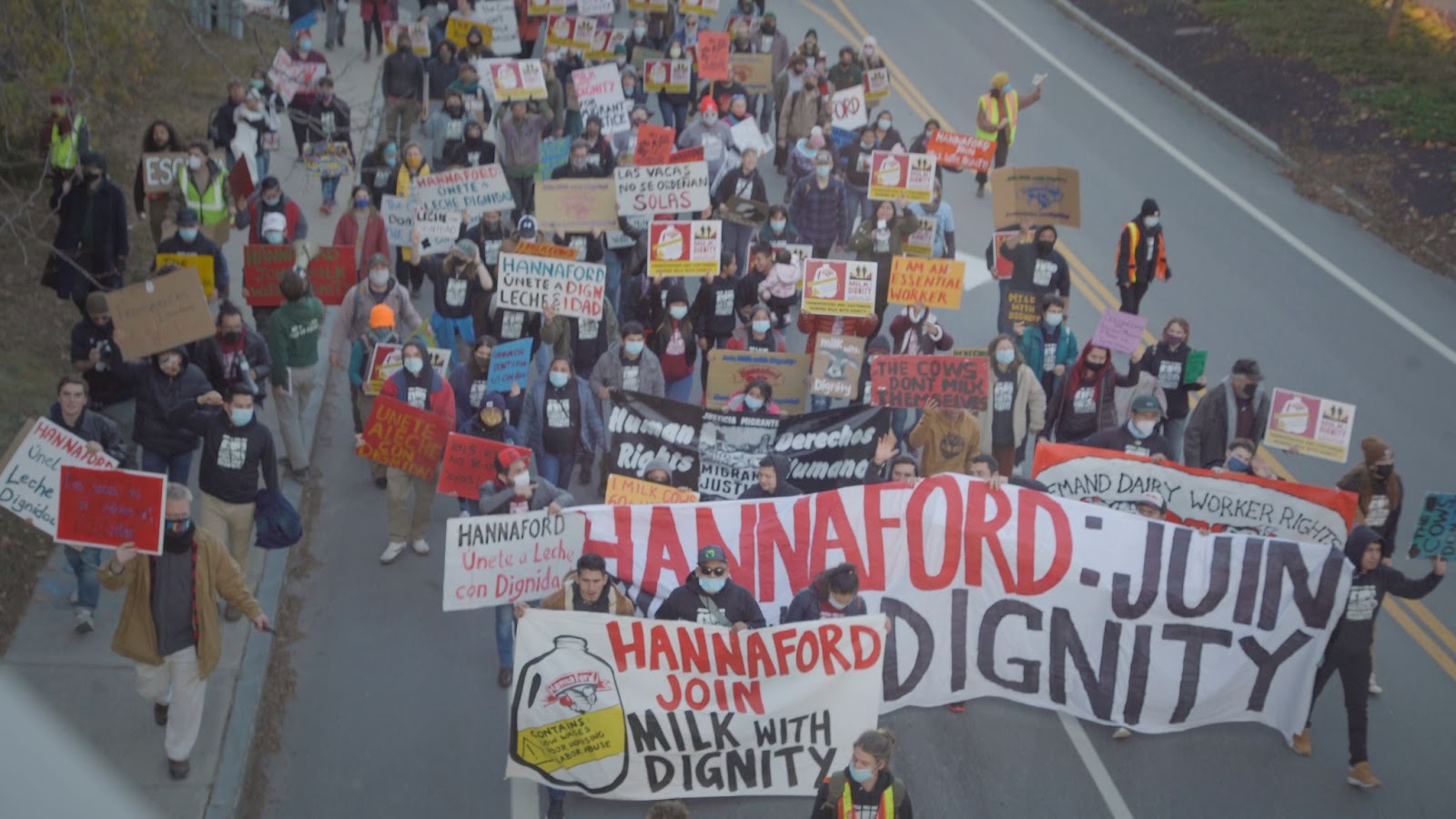 Farmworkers led a crowd of 250 marchers 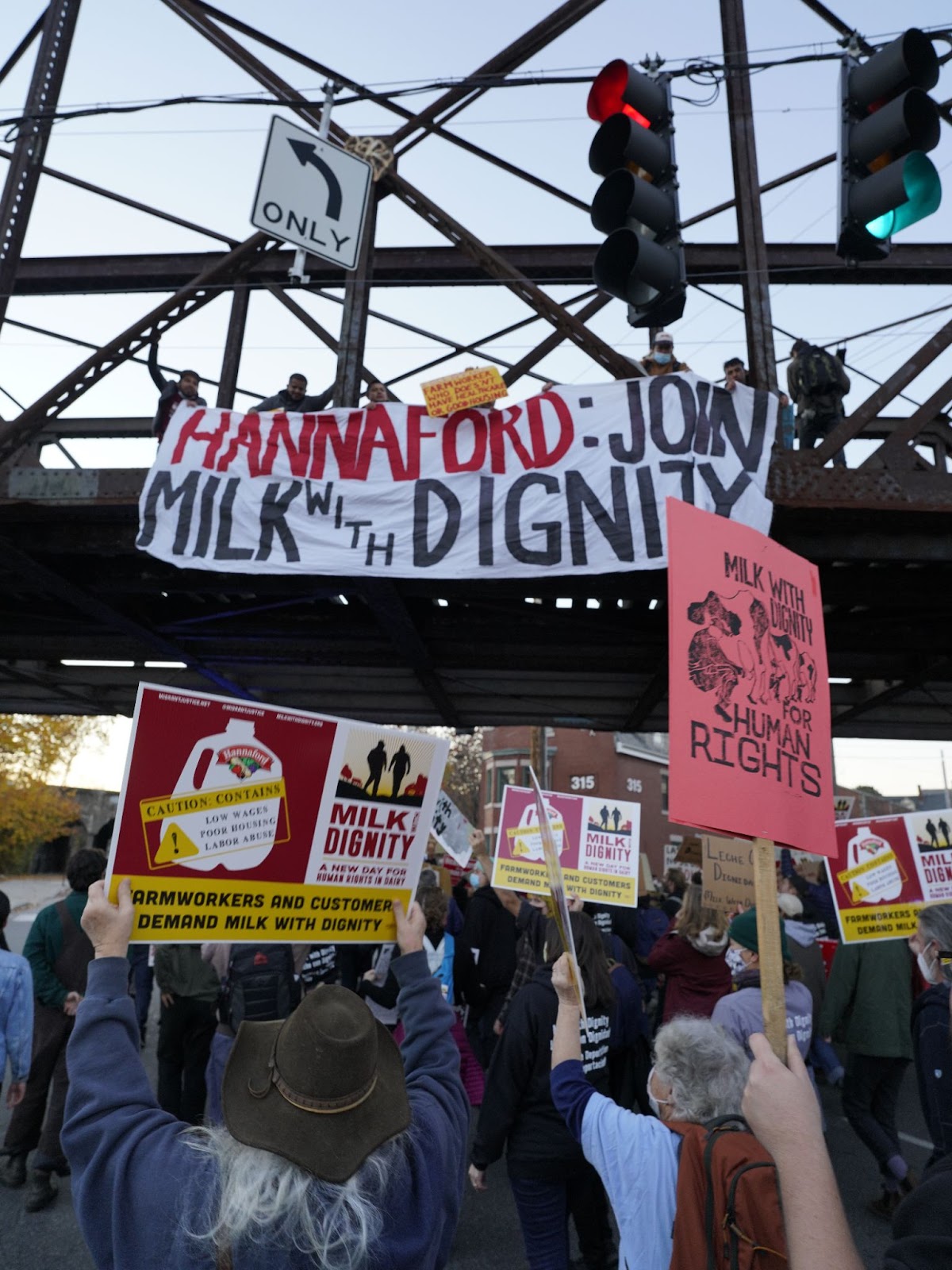 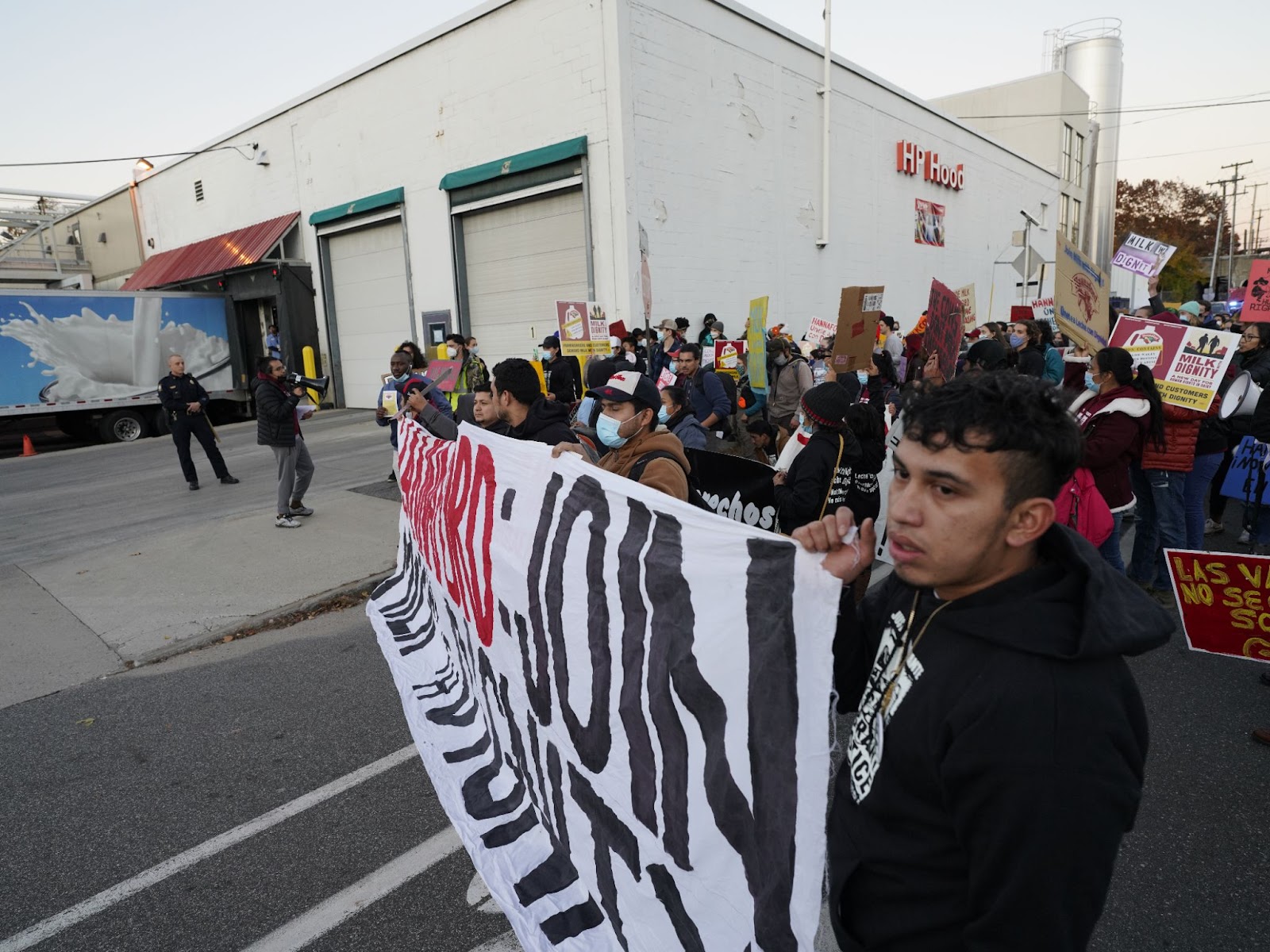 The march arrived at the H.P. Hood Plant, which bottles Hannaford's store-brand milk 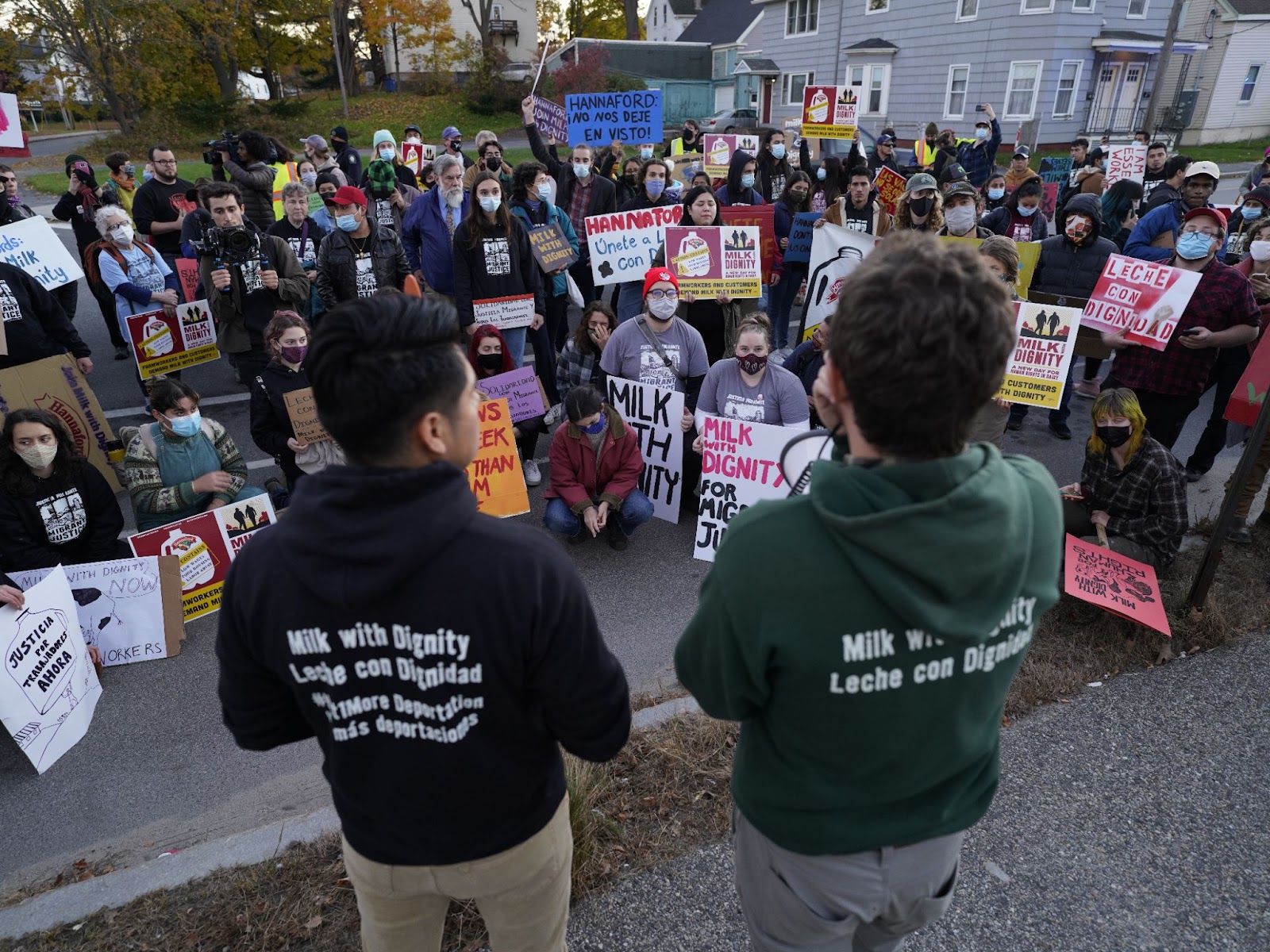 Enrique Balcazar addressed the crowd outside the Hood Plant, sharing testimonies from Maine dairy workers who are working 7 days a week and living in housing without adequate heat 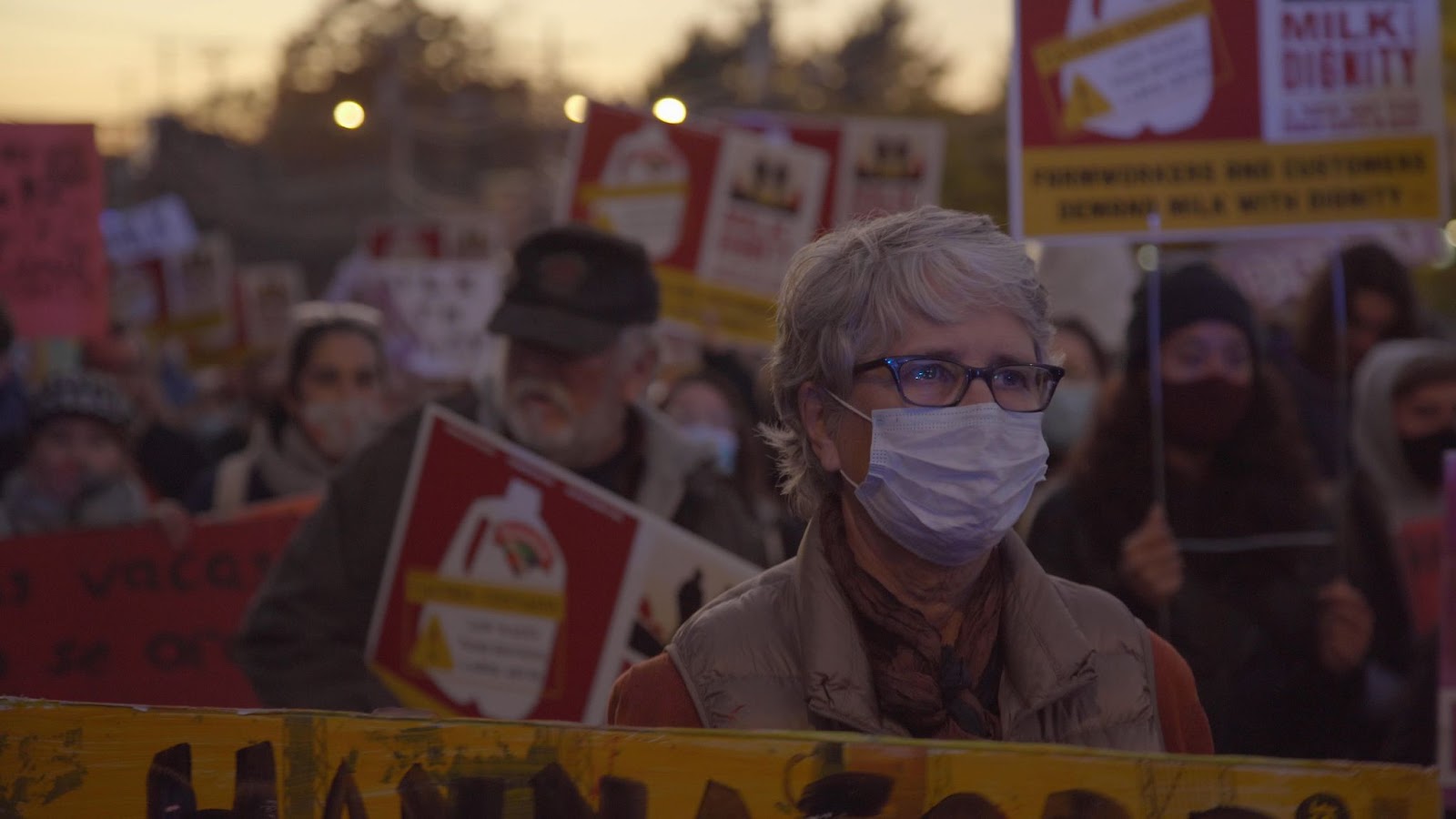 With the sun starting to set, we left the Hood plant and starting marching again 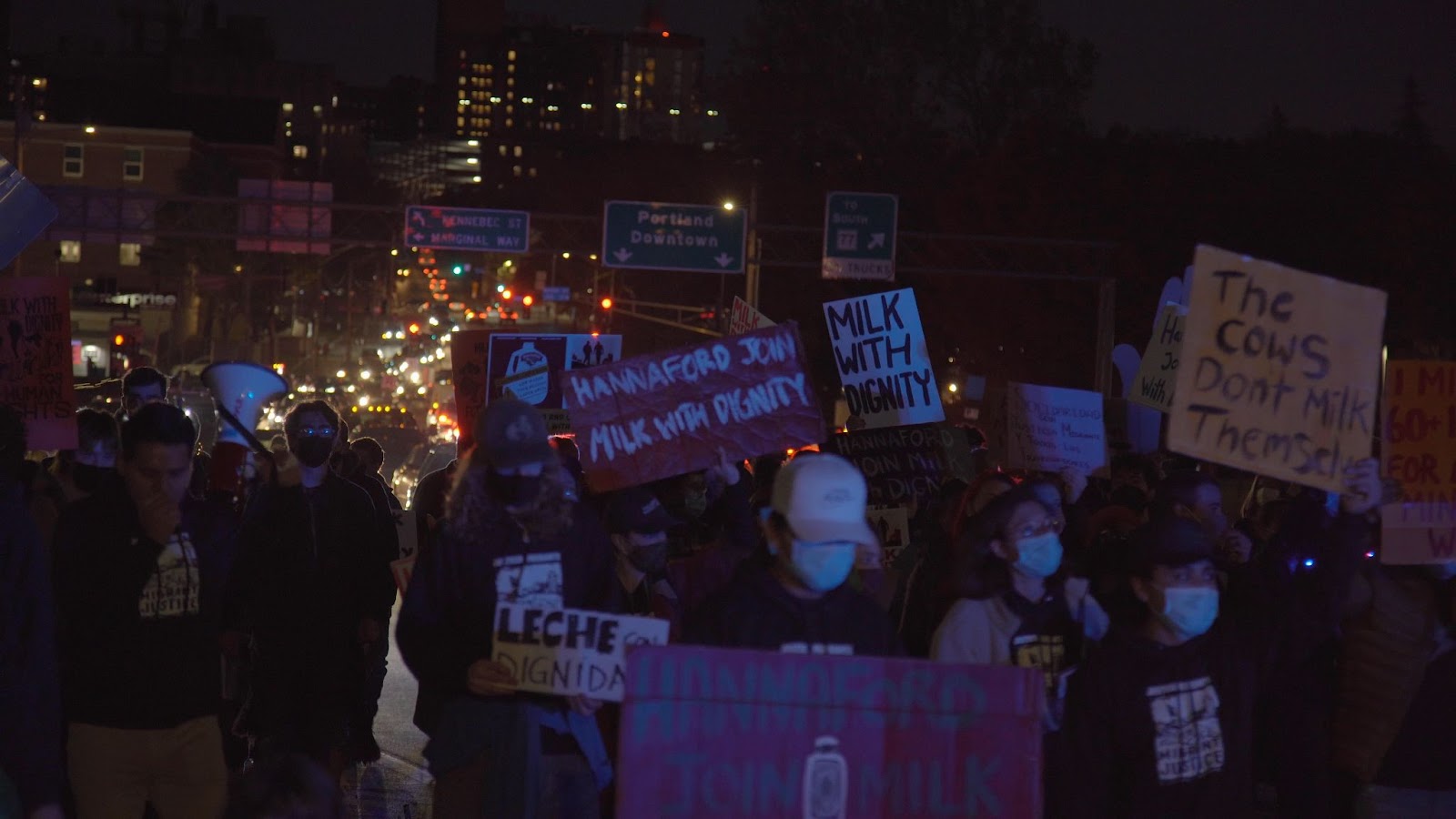 We marched down one of Portland's busiest streets as many Mainers were getting out of work, making sure that we would have high visibility 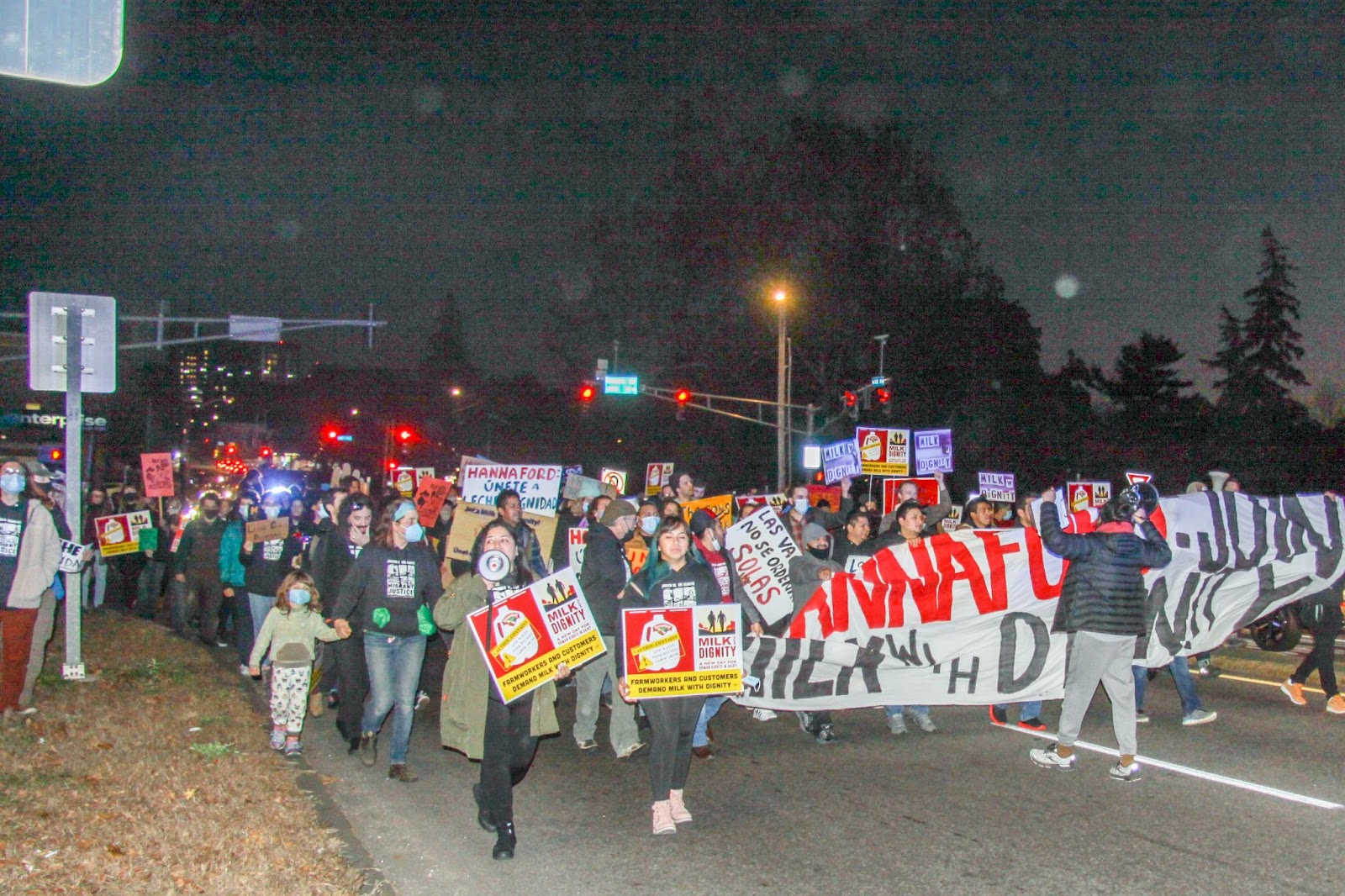 Keeping our spirits high, marchers chanted: "Get up, get down, Milk with Dignity is coming to town!" 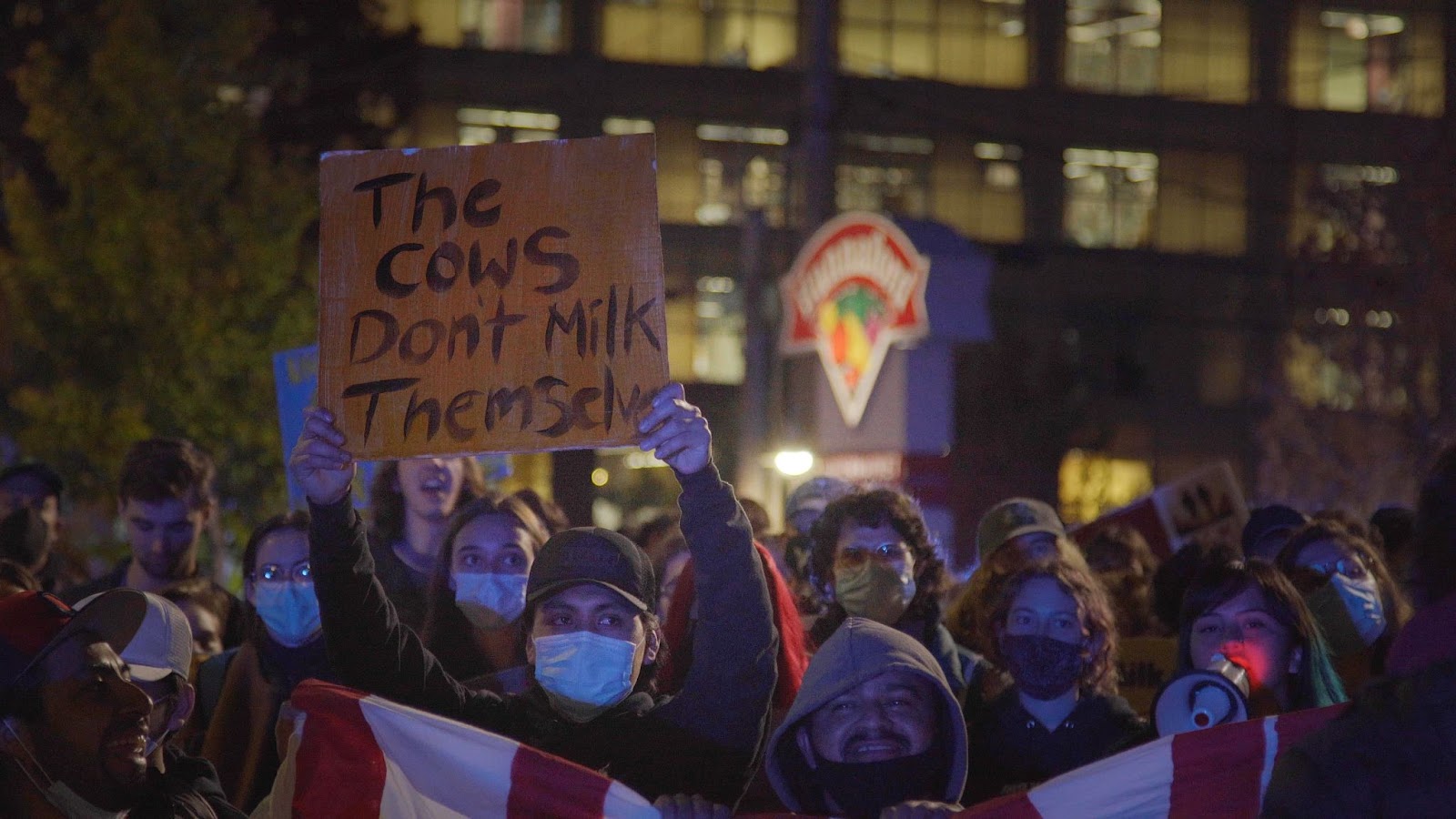 We arrived back at the Hannaford store, making sure the company heard our message loud and clear 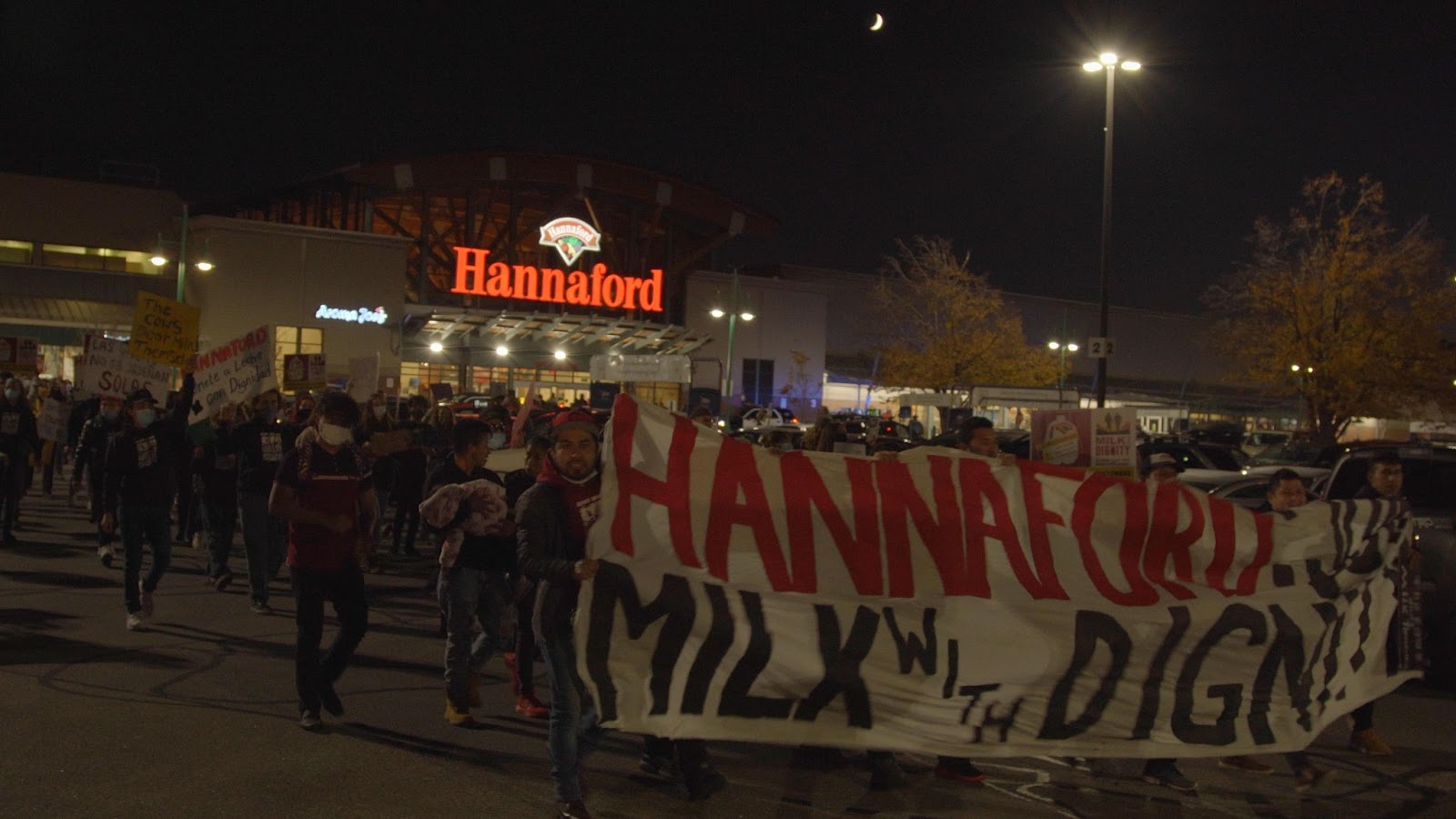 After a final rally at the Hannaford, we headed back to the park... 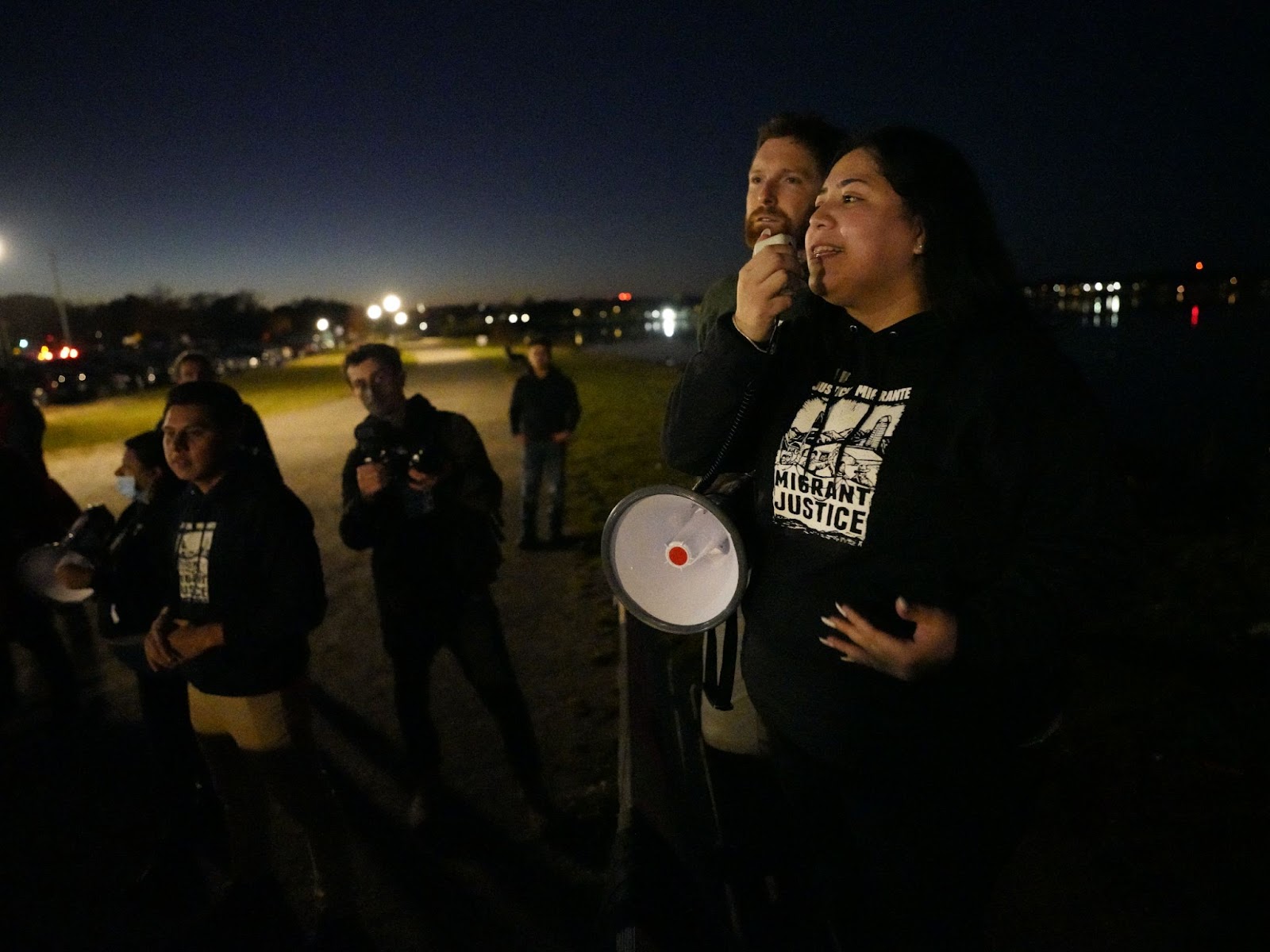 ...where Thelma Gomez thanked the marchers and closed out the night with an invitation to home-cooked tamales.