From D.C. to VT, farmworkers take action on May Day!

Last Saturday, hundreds of farmworkers and allies converged outside a Hannaford supermarket in Barre, VT, calling on the company to sit down with farmworkers and join the Milk with Dignity program. On International Workers Day, we urged the grocery chain to take responsibility for the rights and wellbeing of dairy workers in its supply chain.

Check out the full photo album from May Day’s tremendous, colorful action. Then take a moment to download or screenshot your favorite photo and post it as a comment on the Hannaford facebook page, letting them know that you support Milk with Dignity!

This May Day was one of our busiest ever, with farmworkers participating in simultaneous actions in Vermont and Washington, D.C. A delegation of Migrant Justice members joined a mass march in the U.S. capital, calling on Congress to pass permanent protections for undocumented immigrants – and pushing back against harmful and counterproductive measures like the Big Ag-supported “Farm Workforce Modernization Act.”

Meanwhile, on the steps of the Vermont State House, farmworkers joined 30 labor and community organizations in a worker solidarity rally. Speakers celebrated International Workers Day by linking the fight to protect state employees’ pensions, efforts to strengthen workers’ rights to organize, and the struggles for racial and climate justice.

Following the rally, participants drove to the nearby Hannaford supermarket, linking up with more supporters for a spirited and vibrant action. Farmworkers are calling on the company to address the pervasive human rights violations in its dairy supply chain. Yet after more than a year of protests, Hannaford continues to profit off of farmworker exploitation and ignores the solution presented by Milk with Dignity.

While a band from famed theater troupe Bread & Puppet played, over two hundred supporters picketed in front of the store, drawing supporting honks and waves. Farmworkers then performed a street theater skit, demonstrating the abuses endemic to the dairy industry and acting out the worker-consumer unity needed to bring Hannaford around.

Following the street theater, we pulled out a box of over 1,300 postcards – signed by Hannaford customers urging the company to join Milk with Dignity – taped together to form a chain 200 yards long. Ralliers marched with the postcard chain to the doors of the supermarket, then literally wrapped the front of the store with the messages of support.

Head over to our facebook page to look at the full album of beautiful photos from the day of action. Download or screenshot your favorite one, then head to the Hannaford facebook page and upload the photo as a comment under a recent post. 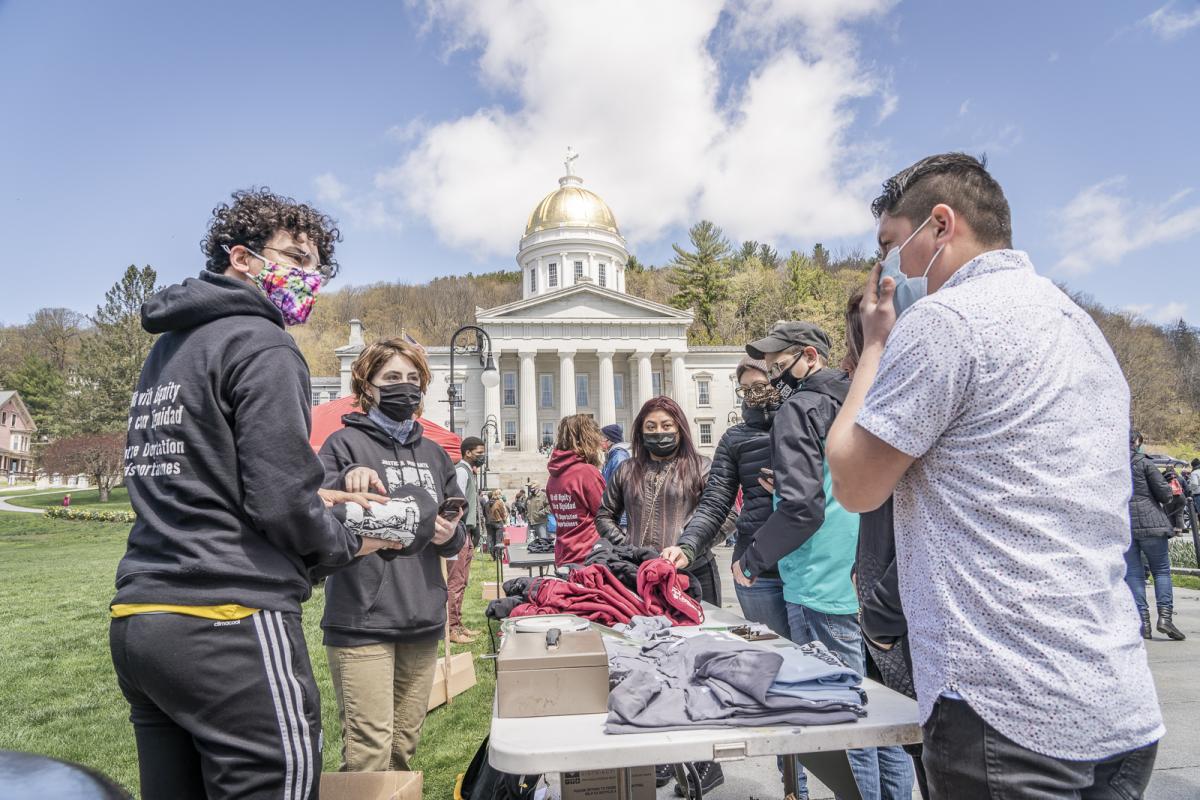 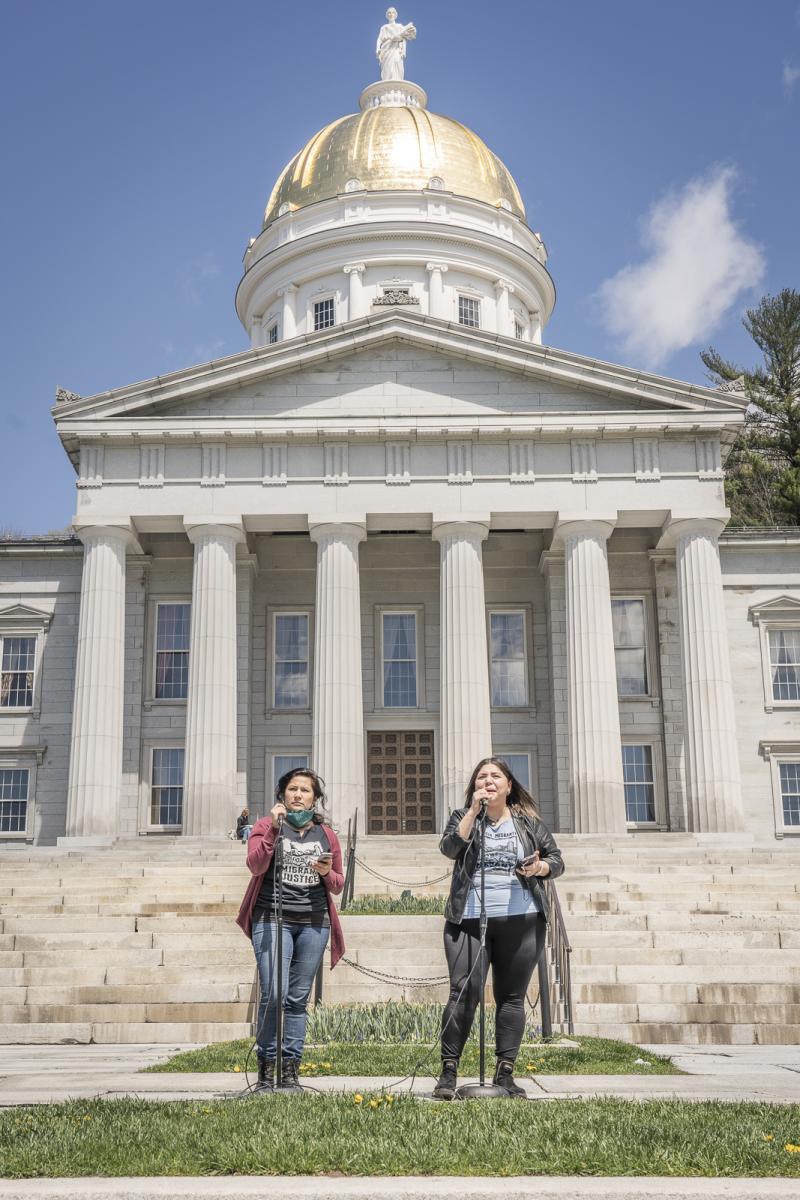 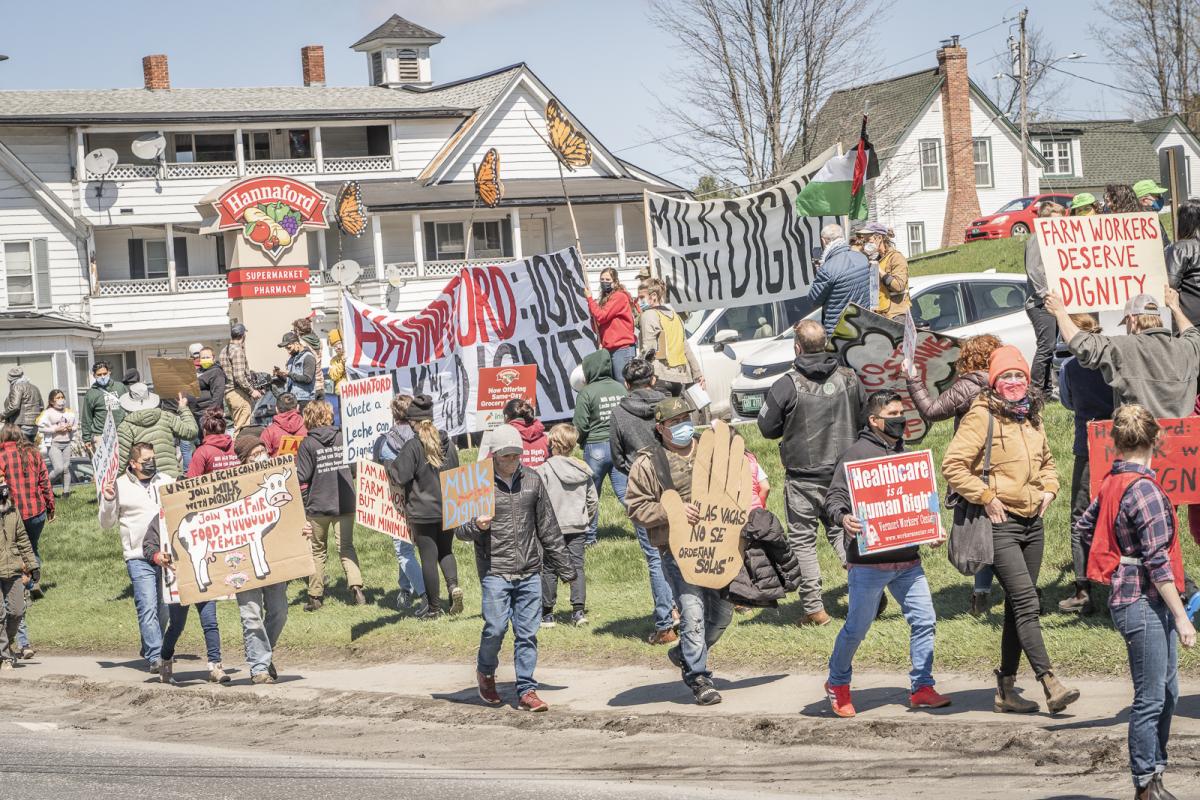 Then it was time to head to Hannaford in Barre 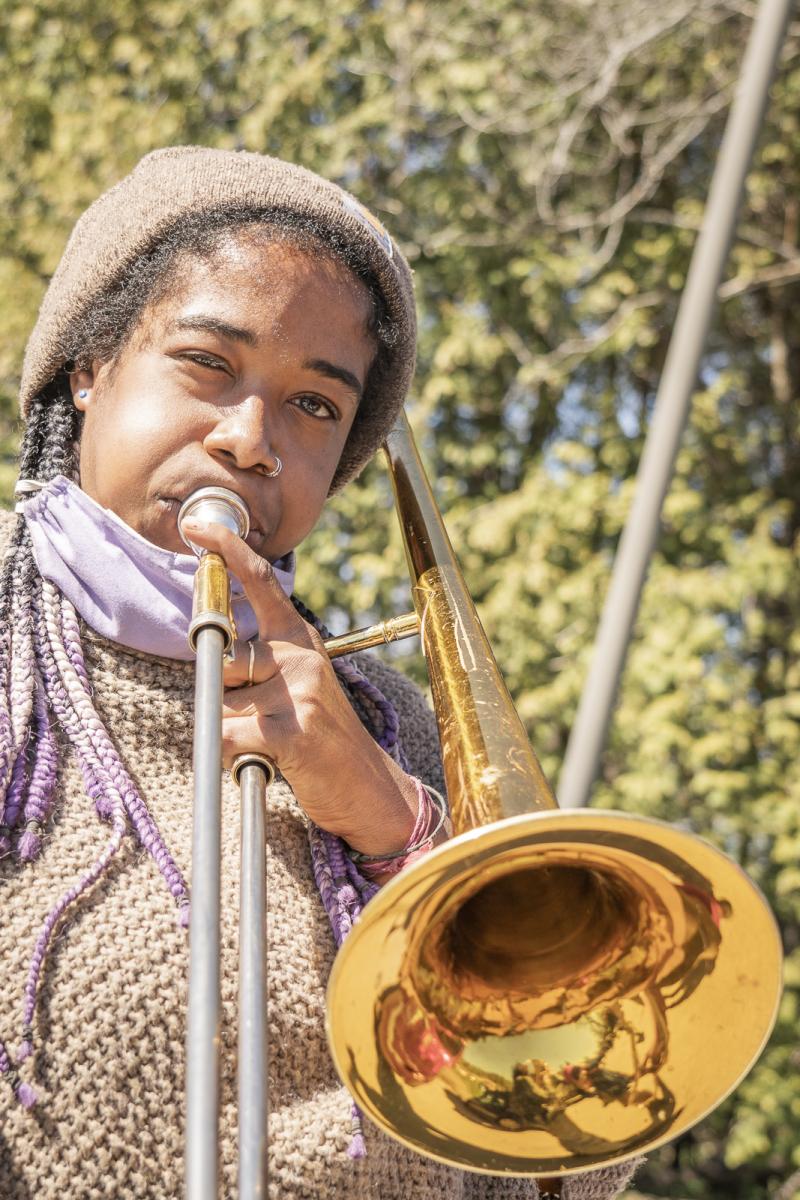 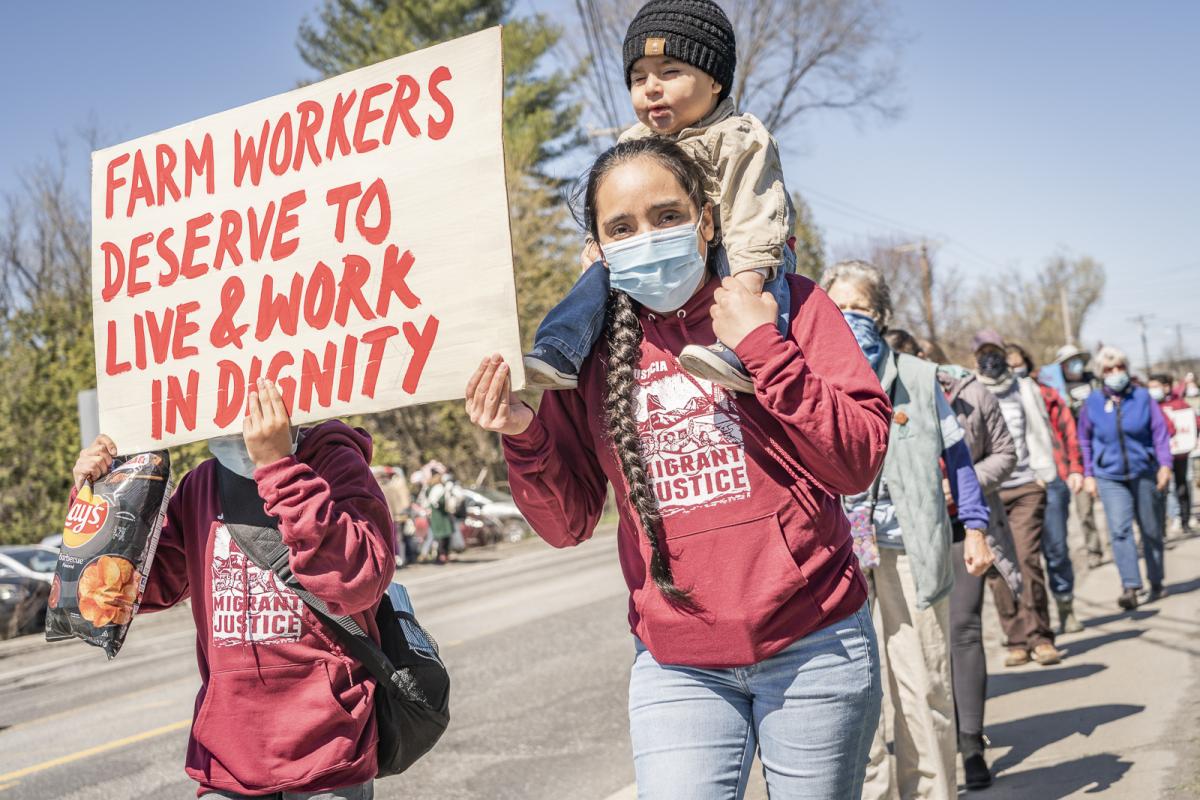 Farmworkers and their families led the way 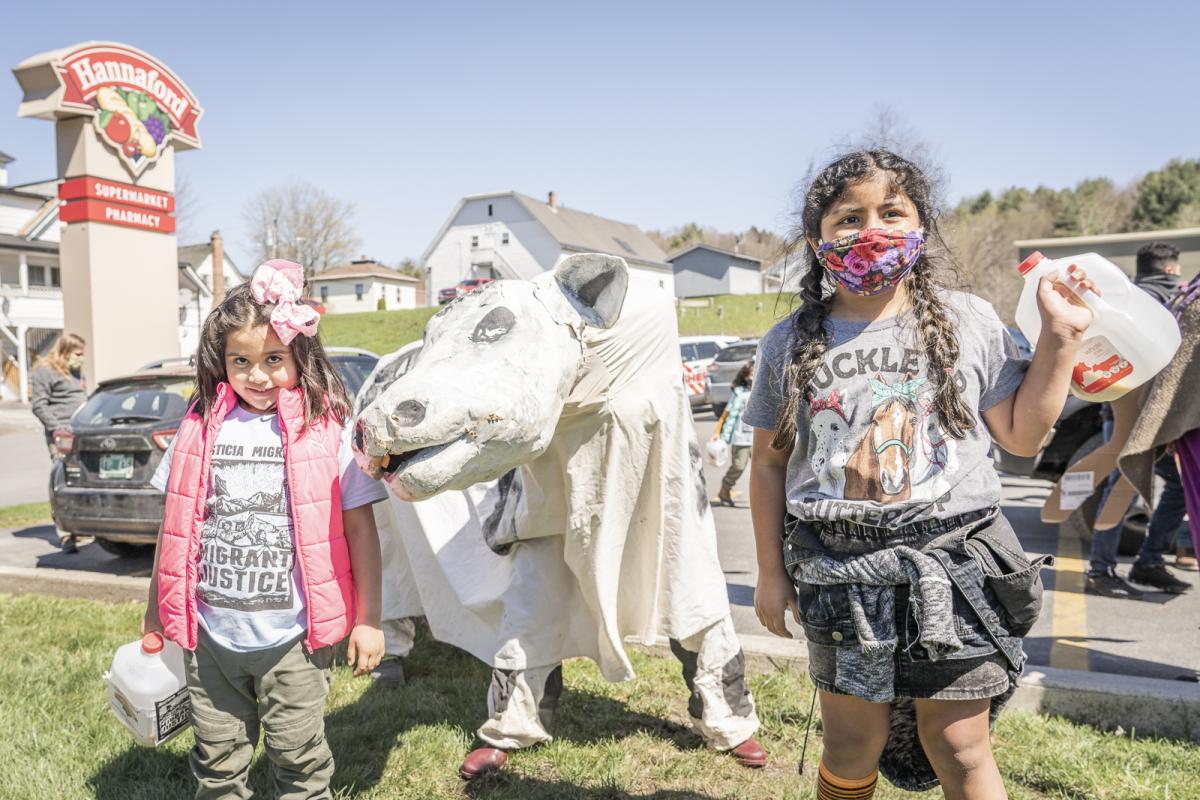 The actors assembled for the street theater 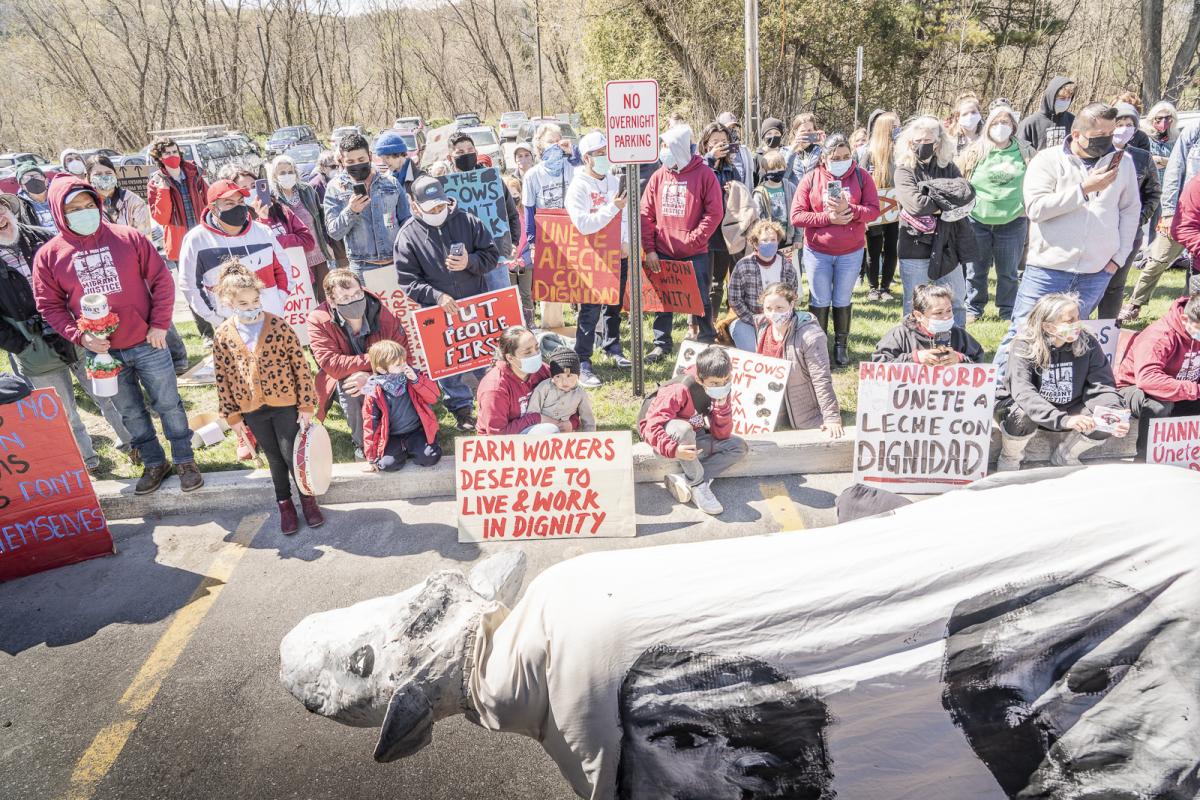 The crowd watched as farmworkers acted out the long hours, high rate of injuries, and lack of protections they face 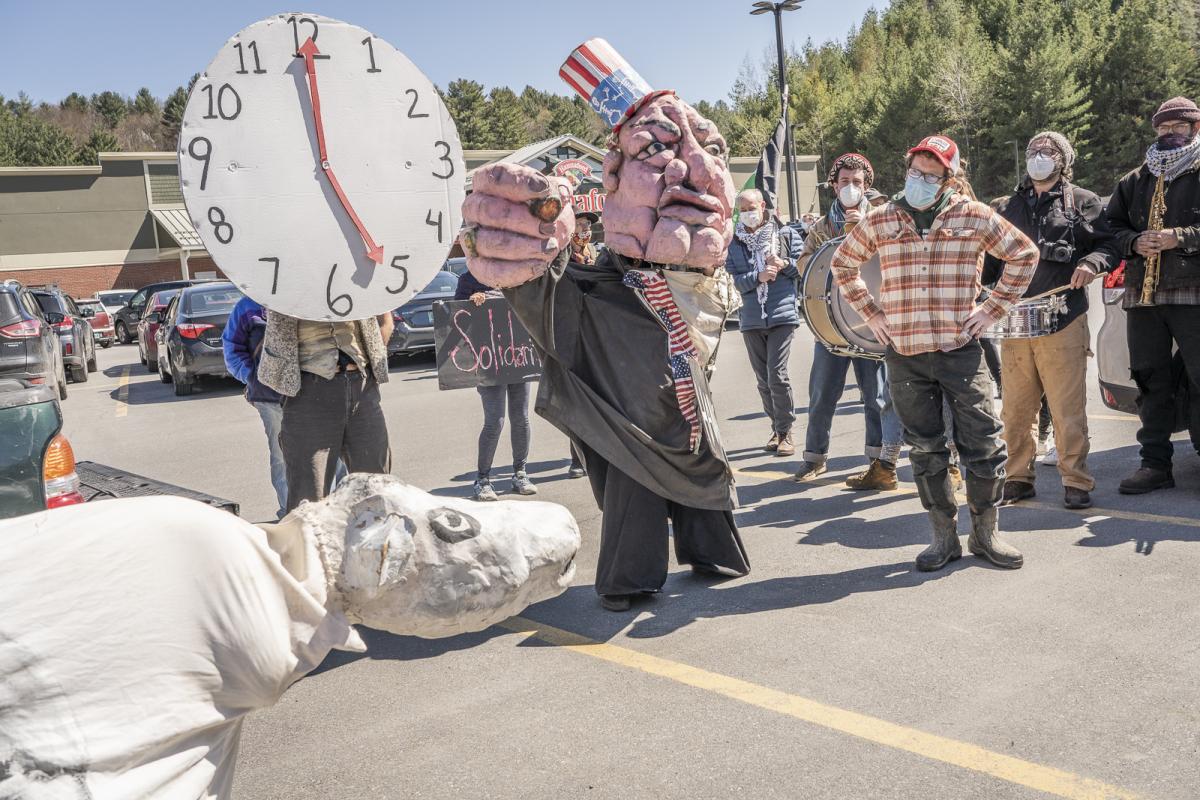 And in the background "Hannaford" was calling the shots... 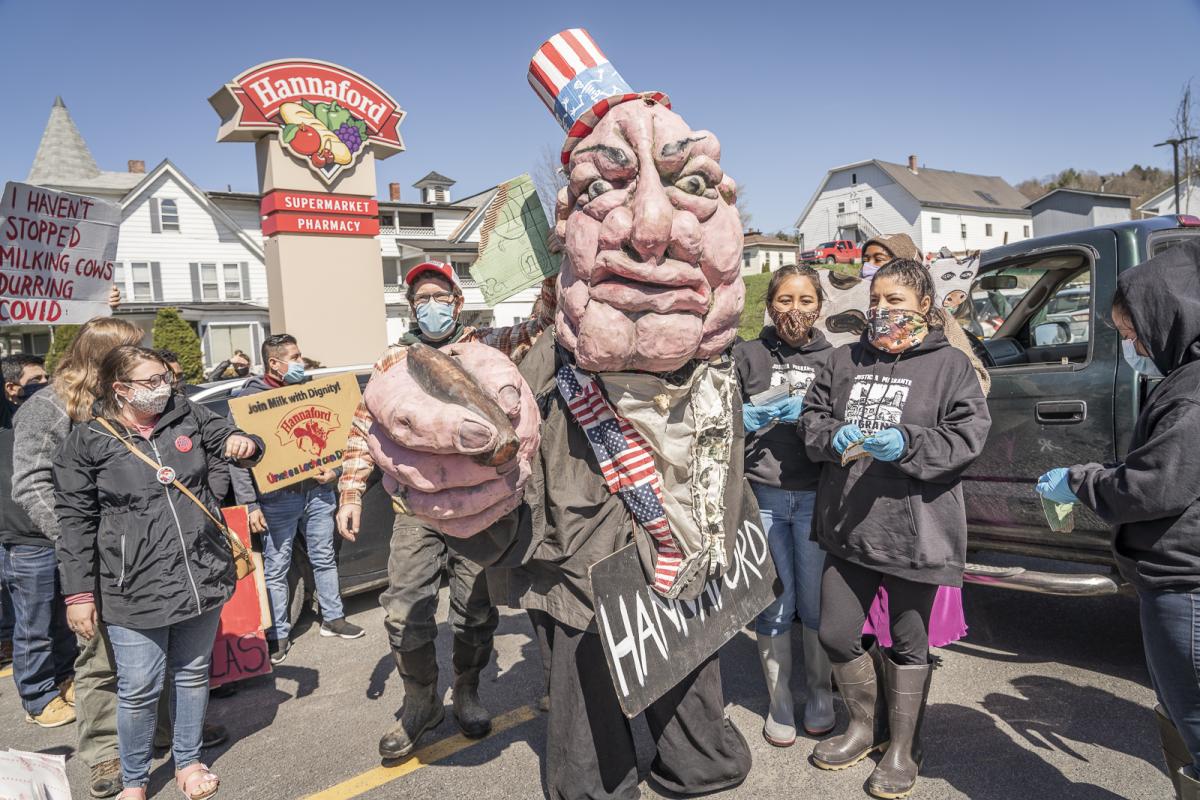 ...until workers and consumers banded together to bring "Hannaford" into the Milk with Dignity Program!

Then it was time for the postcard delivery 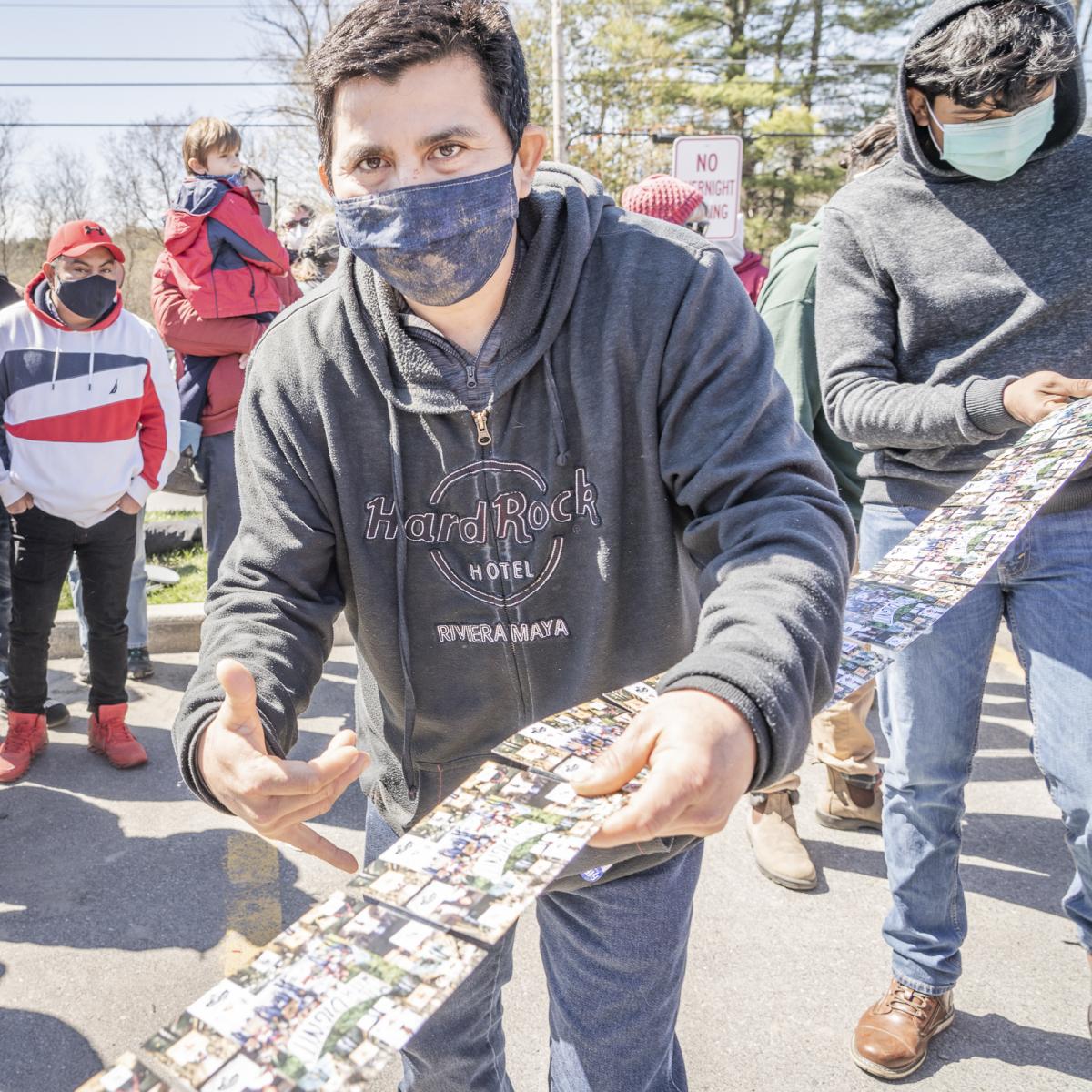 We began to unfold the 1,300+ postcards signed by Hananford customers calling for Milk with Dignity 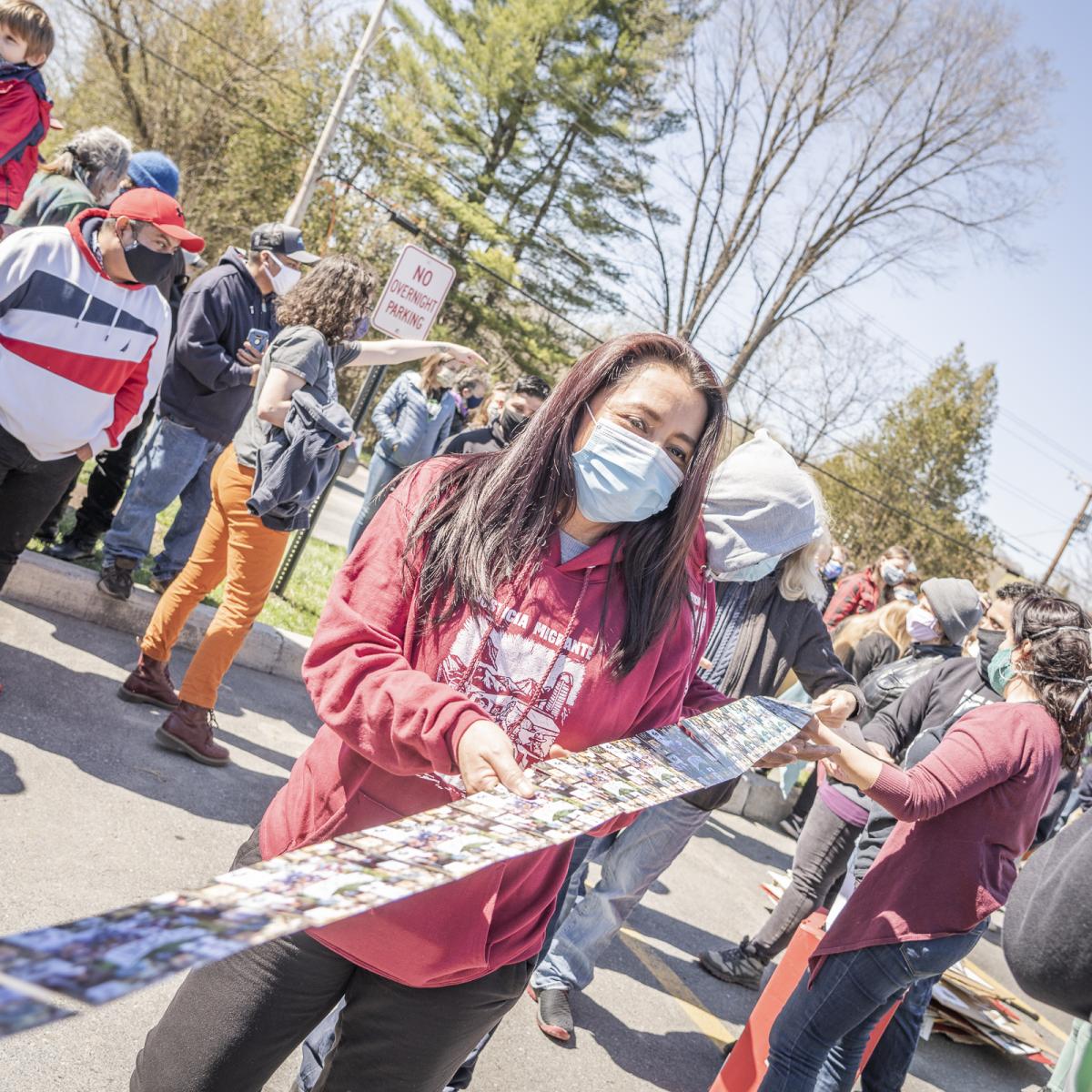 And kept unfolding them... 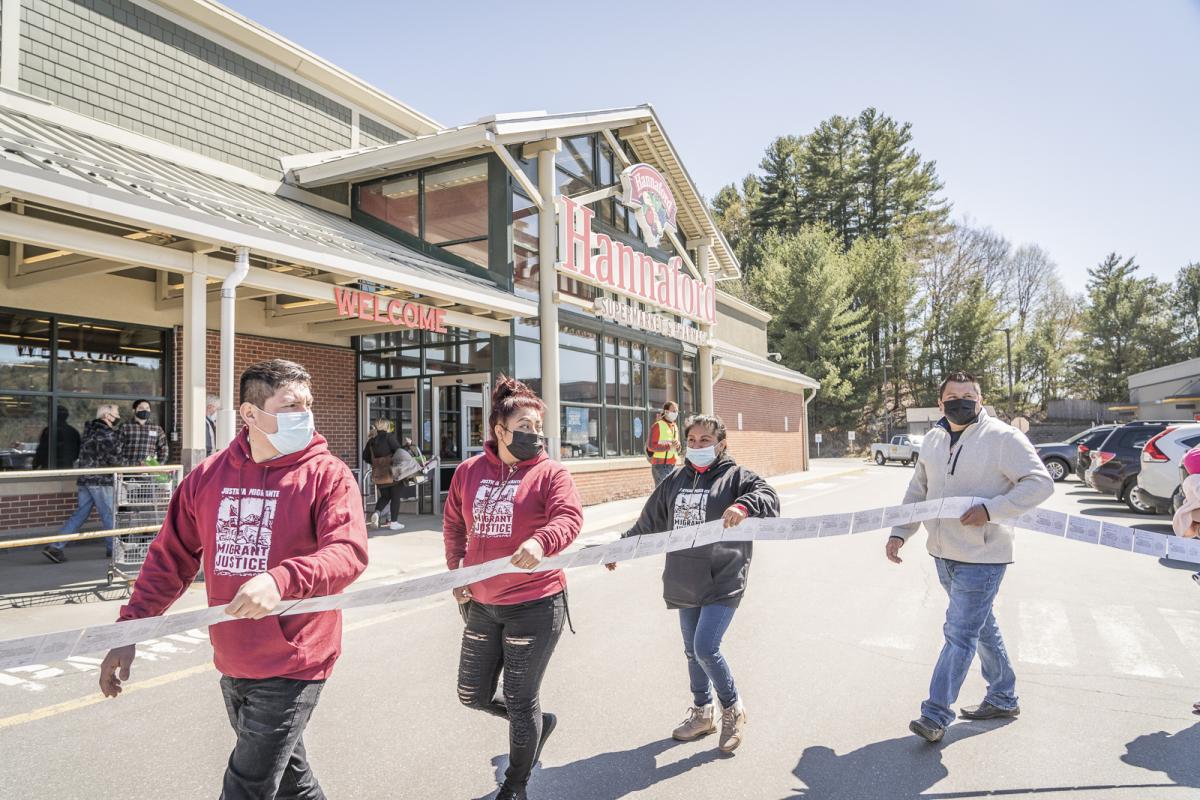 ...until we had stretched out the 200-yard chain all the way to Hannaford's front door! 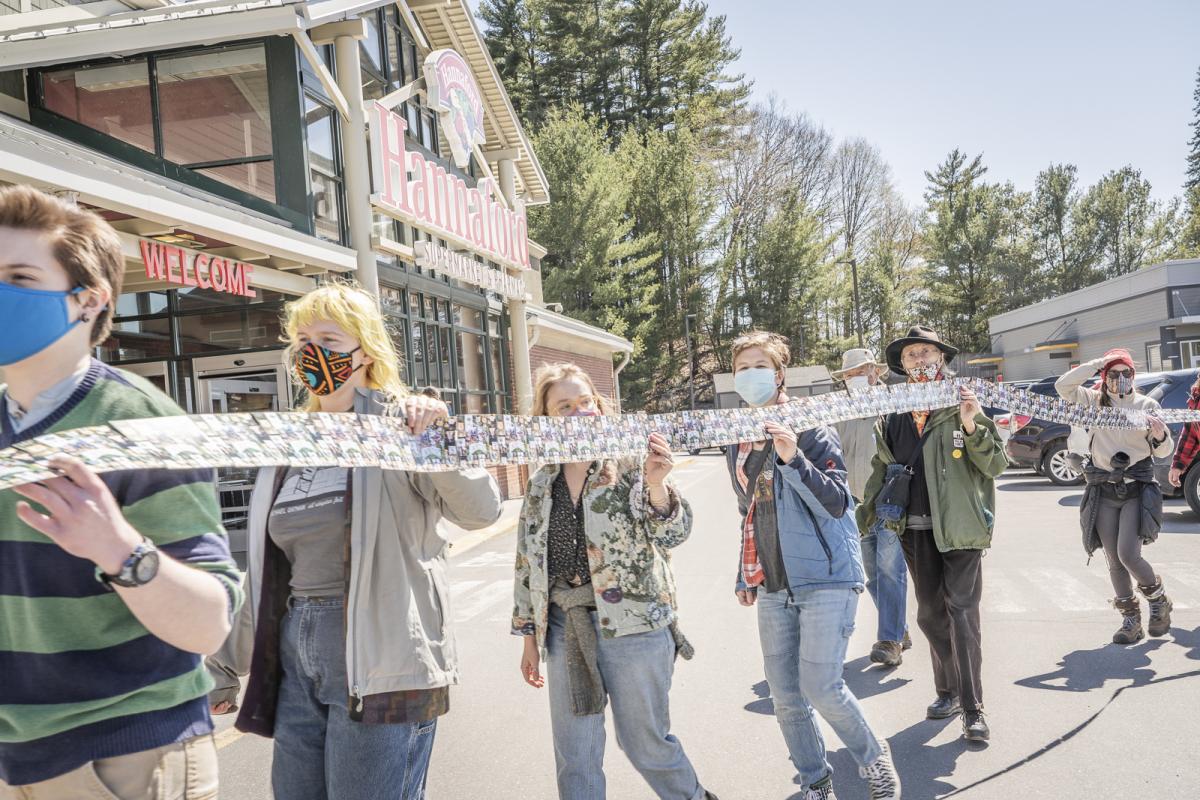 People kept coming with the postcards 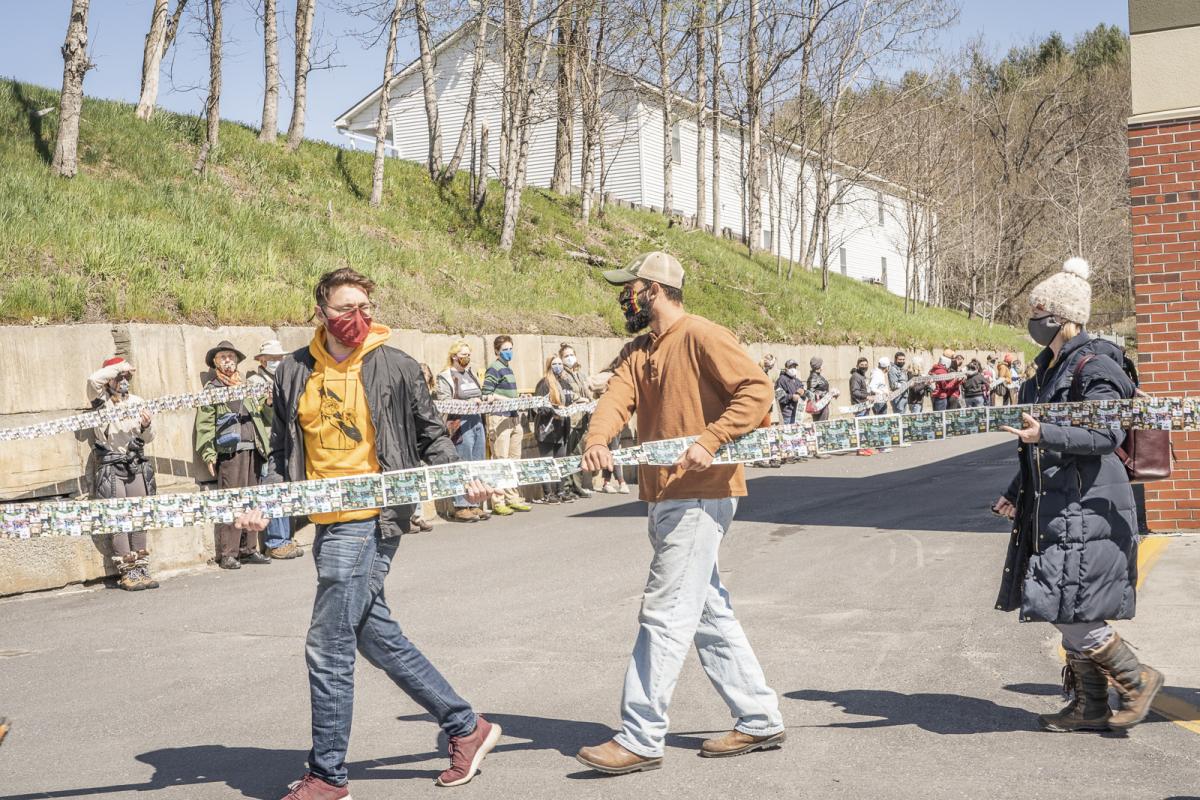 And we eventually had nearly the entire building wrapped in the chain! 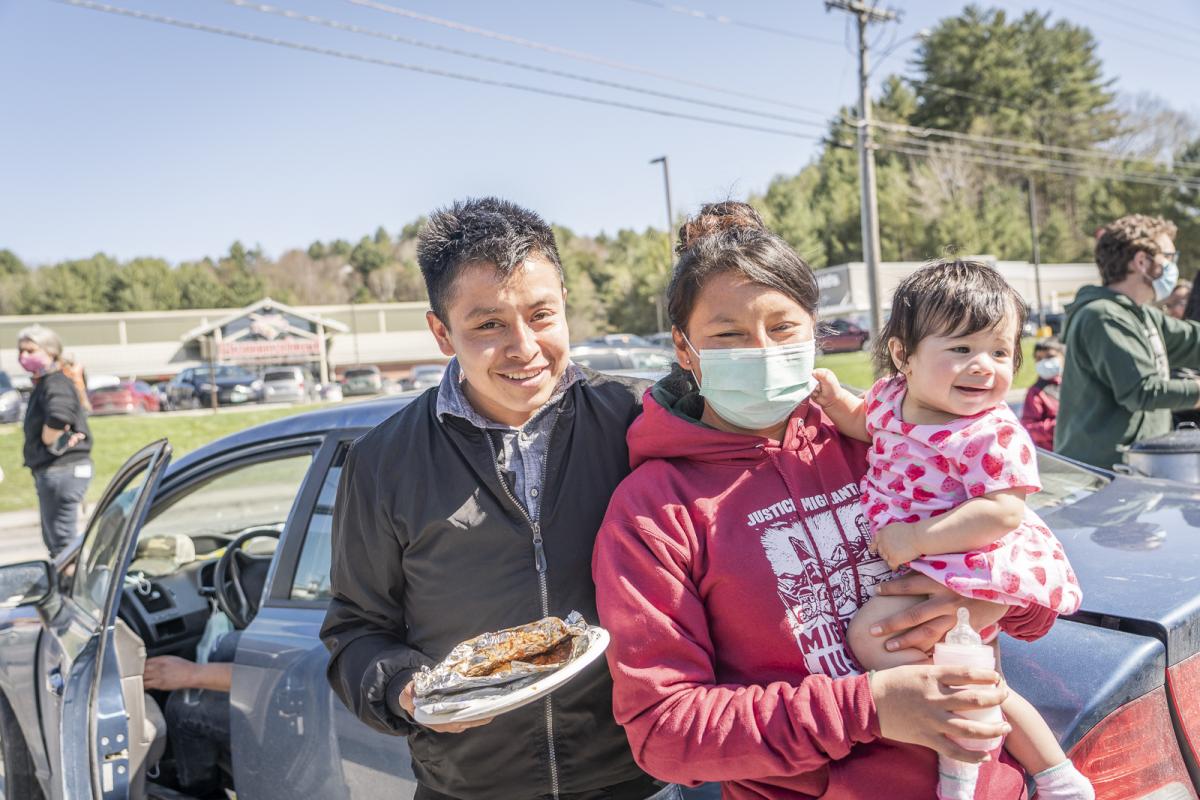 It wouldn't be a Migrant Justice action if we didn't end it with tamales! Happy May Day everyone!