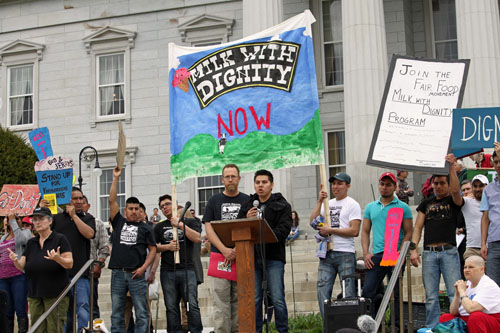 On May Day a powerful grassroots movement of Vermont dairy farmworkers marched in the streets of Montpelier, VT with hundreds of workers and allies demanding Vermont step up its commitment to workers' rights.  Farmworker leader Enrique Balcazar told a crowd of supporters that dairy workers are fed up with wage theft, dangerous working conditions, no time off, substandard housing, and no enforcement of their rights. He offered farmworkers' solution:

"Join us for a national day of action on June 20th calling on Ben & Jerry's to take responsibility for these conditions in their supply chain. They've stood up to protect cows and chickens but not farmworkers! We need Milk with Dignity!"

Stand with VT dairy workers in calling on Ben & Jerry's to Join the Milk with Dignity Program by:

Stand up for farmworkers' rights at your local Ben & Jerry's Scoop Shop!​ We are hopeful Ben & Jerry's will come to understand its moral obligation before June 20th giving them an opportunity to turn this into a national celebration of farmworker's rights! Email us to organize an action in your town!

Join VT farmworkers as we rally and march through the streets of Burlington descending on Ben & Jerry's on Church St. for either a party or a protest. Email us to help out in VT! 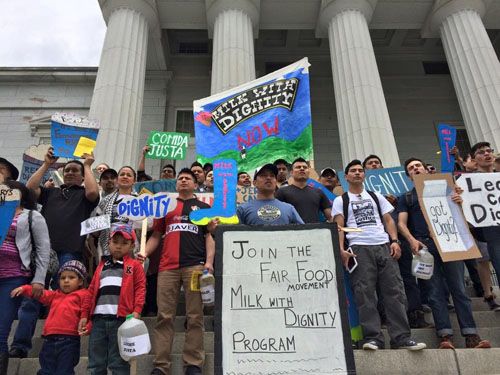 VT dairy farmworkers' pressing question was posed to readers across the nation this week in the renowned national food blog Civil Eats by author Vera Chang:

Farmworkers believe the answer should be an easy one for the company that has made a name for itself working to ensure responsible sourcing of ingredients. However, CEO Jostein Solheim has not yet chosen to meet with workers to negotiate an agreement. Rather Ben & Jerry's has been actively promoting their "Caring Dairy Program" as the forum to resolve farmworkers' problems. An idea farmworkers have emphatically rejected as leader Enrique Balcazar, responds:

"Caring Dairy was never designed with the goal of ensuring VT dairy workers' rights are respected--it is a farmer education tool and is not equipped to make a credible claim to ensuring farmworker's rights are protected. The program has absolutely no teeth, no real enforcement, no oversight, no monitoring, no auditing, and no accountability to workers. Most importantly there is no participation of workers built in to the day to day operations of the program to ensure they know their rights and can demand their rights without retaliation."

"The Milk with Dignity Program has 5 essential elements all of which are designed to give voice to farmworkers and protect their rights. The first is standards--farmworkers have determined our definition of dignity. The second is farm worker education--farmworkers know their rights and know what to do if their rights are violated. Next is a third party that will monitor and enforce the standards that were created. The fourth are premiums--the farm worker and the farmer should be given something directly from the corporation--in this case Ben & Jerry's. The fifth is a legally binding agreement--it makes all of these essential elements work under a legal framework."

Ben & Jerry's will only find their moral compass with some help from our movement!   Their participation in the Milk with Dignity program is an opportunity for the company to make a truly credible claim that they are sourcing their cream in a manner that respects and upholds the rights of farmworkers.

Join the movement Ben & Jerry's! Let's turn June 20th into a huge celebration for farmworker's rights! Its time to sit down with farmworkers and negotiate an agreement to participate in the Milk with Dignity Program!