"The first time I saw my dad after eight years apart, I couldn’t believe how much he had aged. When he had left our home in Mexico to come to the United States, he was still a young man. After eight years of toiling on a Vermont dairy farm—sending money home so my siblings and I could go to school—his face looked weathered, worn, and tired."

You have to check out this must-read history of the Milk with Dignity campaign and Vermont farmworker's fight for human rights, written by former dairy worker and community leader Enrique "Kike" Balcazar!  Now on the front page of popular food magazine Civil Eats, Kike's essay charts his path from coming to Vermont at 17 years old to join his father on a dairy farm, to marching on the Ben & Jerry's factory tomorrow, to demand that the company make good on its two-year-old commitment to join dairy worker's Milk with Dignity program. 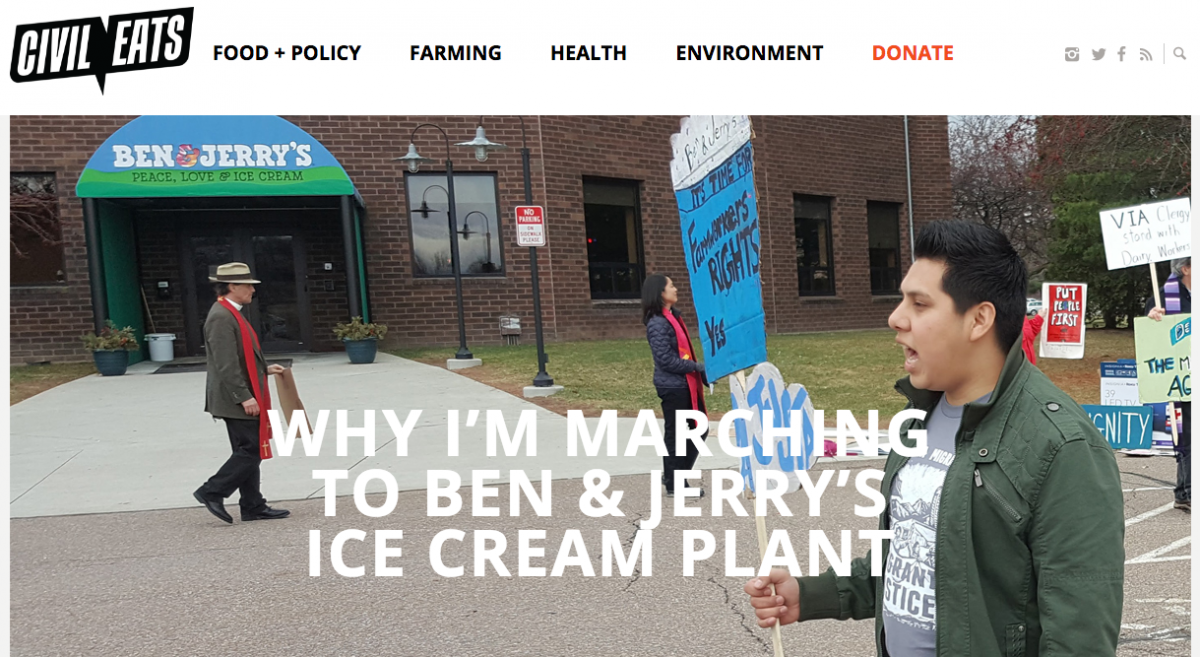 "The farmer had me working 12 to 15 hours a day, with no day off. At the end of my first week, my body aching from over 80 hours of hard labor, I received my first paycheck and couldn’t believe what I saw: $350, or just over $4 per hour. At that time, I had no idea what the minimum wage was, but I knew that it wasn’t fair pay for the work I had done. But when I tried to express my frustration to the farm owner, he simply told me that’s how much the job paid.

"A few months after coming to Vermont, organizers with Migrant Justice visited my farm and invited me to a community assembly, where I joined 30 other farmworkers in sharing food and swapping stories about abusive work conditions just like mine. I was happy to find my community, but angry to find out that we were all suffering. Then and there, I decided to get involved in the fight for my rights."

He describes the formation of the Milk with Dignity program, inspired by the transformational success of the Coalition of Immokalee Workers (CIW) and the Fair Food Program (FFP):

"Vermont dairy workers traveled to Florida to see first-hand what the CIW had accomplished in the tomato fields. Workers were picking in 90-degree heat, but because of the program, they now had water breaks and shade tents. I saw CIW organizers talk with workers about their rights and how to enforce them. At the time, we dreamt that one day we would be doing the same on dairy farms in Vermont.

When we came home, we got to work adapting the FFP and the principles of worker-driven social responsibility to the Vermont dairy industry; the result was the Milk with Dignity Program. We decided to approach Ben & Jerry’s ice cream, giving the Vermont company the opportunity to be the first corporation to join the program."

Head over to Civil Eats to read the whole piece now!