"Days of Fury and Days of Tears" - Free Victor Diaz!

"There are days of winds, days of fury and days of tears.  But there are also days of love that give us the courage to carry on." - Victor Diaz 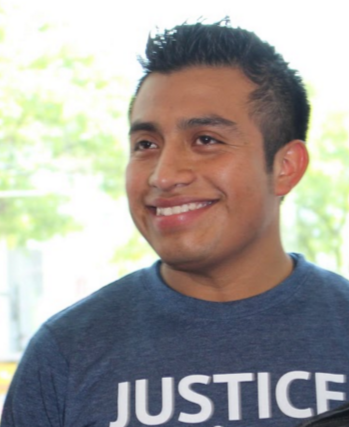 Migrant Justice leader Victor Diaz was arrested on Thursday, April 21st by undercover ICE agents outside a Mexican cultural event in Stowe, VT.  He had returned the day before from a national gathering of the Food Chain Workers Alliance in Los Angeles, representing Vermont farmworkers in an effort to build a unified movement for fair food.

Victor is a dairy farmworker in Vermont and a nationally-recognized human rights leader.  Two years ago, he reached out to Migrant Justice after enduring years of inhumane conditions on a Vermont dairy farm. Farmworkers and allies joined forces to march on the farm and won back $1,800 in stolen wages.

This past year, Victor traveled to Florida to learn about the ground breaking Fair Food Program. As a new member to Migrant Justice’s Farmworker Coordinating Committee he committed his days off to help build and design the Milk with Dignity Program and has represented his community in meetings with Ben & Jerry’s, where he has played a crucial role inspiring the ice cream company to commit to join the Milk with Dignity Program.  In 2015, Victor was featured in a New York Times article highlighting Milk with Dignity.

Victor is currently being held at an immigration detention center in New Hampshire.  The government is trying to deport him, and it will take the strength of our movement to free Victor and return him to his community in Vermont.  The day after Victor's arrest, Migrant Justice farmworkers and supporters marched on Senator Leahy's office demanding that the ranking Democrat on the Senate Judiciary Committee intervene in the case.  In the following days, dozens have written letters of support and sent in videos in solidarity, including the Senate office of presidential candidate Bernie Sanders.

It is a difficult time for the Migrant Justice community, but we draw strength from Victor's words. Though we find ourselves in "days of wind, days of fury and days of tears," feeling anger and sadness over the unjust detention of our friend and leader, we remember that "there are also days of love that give us the courage to carry on."