"Listen up Ben & Jerry's, because the people are rising up!" 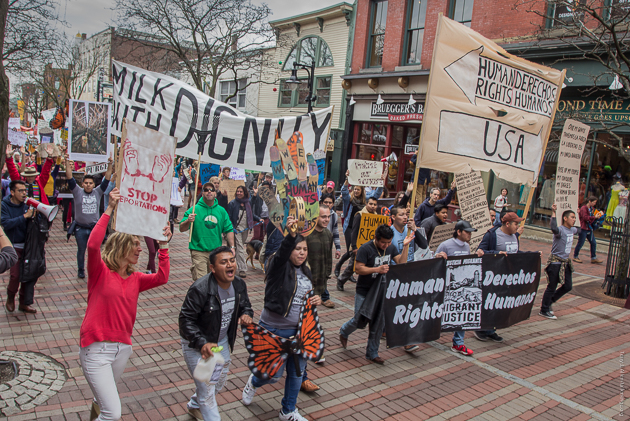 This May Day, hundreds came together in Burlington for a beautiful and powerful “March for Dignity.” The action coincided with marches, rallies, and strikes across the country and around the world on International Workers' Day.  The streets echoed with chants calling on Ben & Jerry’s to make good on its June 19, 2015 commitment to source its milk in compliance with the the human rights of dairy workers: “Get up! Get down! Milk with Dignity’s comin’ to town!”

“Listen up Ben and Jerry’s because the people are rising up. I am a dairy worker and I know the conditions in the industry; I know what it is to suffer in your supply chain. Thanks to the hard work of farmworkers -- the workers who are putting the cream in Ben & Jerry’s Ice Cream -- you are making a delicious product sold around the world. But it is a product made without dignity."

Marchers delivered thousands of postcards to the company, taped together in a 150-yard-long chain that extended for a full city block, demanding that Ben & Jerry’s sign the Milk with Dignity program.

From Ben & Jerry’s, the march continued to the Federal Building, where speakers denounced ICE’s targeting of the Migrant Justice leaders who have been on the front lines of the Milk with Dignity struggle.  Victor, Miguel, Zully, and Kike -- four leaders arrested by ICE and released after public pressure over the past year -- led the crowd with rousing speeches, sending a clear message to Trump’s deportation agency that we will not be silenced by fear and intimidation.

Enrique “Kike” Balcazar closed the rally with a call of defiance:

“We aren’t going to give up this fight. We will never give up. We’ll never stop. No one -- not Trump, not ICE, not Ben & Jerry’s -- no one can stop us from being out here today, demanding our rights.”

The march was organized by Migrant Justice and the Vermont Human RIghts Council, composed of the Vermont Worker's Center, 350VT, Green Mountain Self-Advocates, VT Center for Independent Living, VT Interfaith Action, UE, United Academics, Pride Center, Rising Tide Vermont, Green Mountain Central Labor Council, Peace and Justice Center, and Justice for All. The event was also sponsored by the VT AFL-CIO and Rights & Democracy. Many thanks to sponsors, speakers, volunteers, and all who made the march possible.

Check out the photos below - and watch the full video of the march! 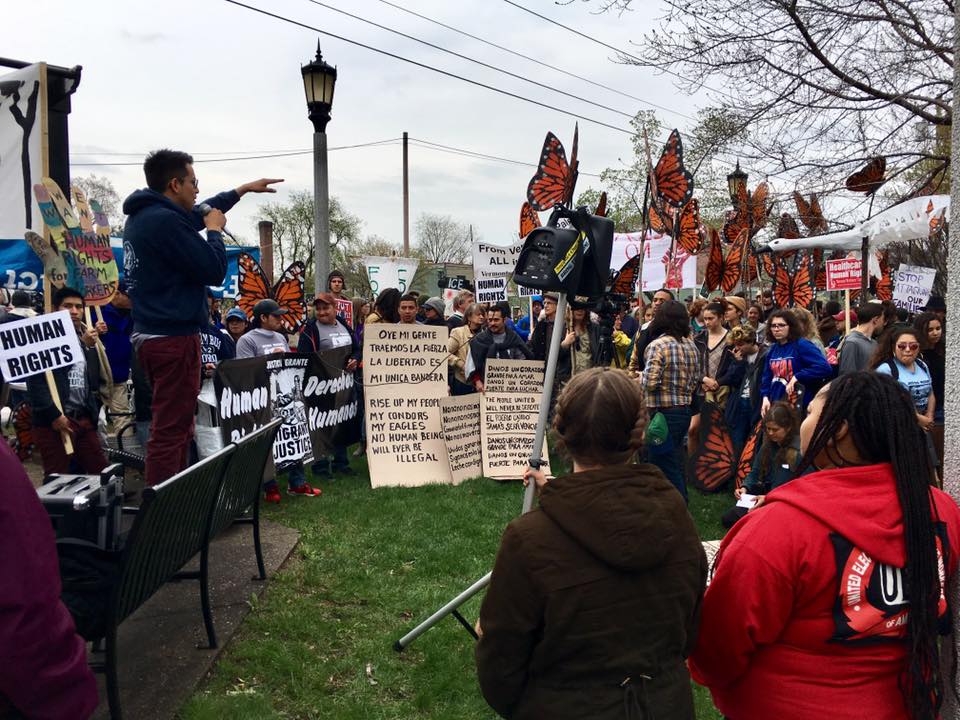 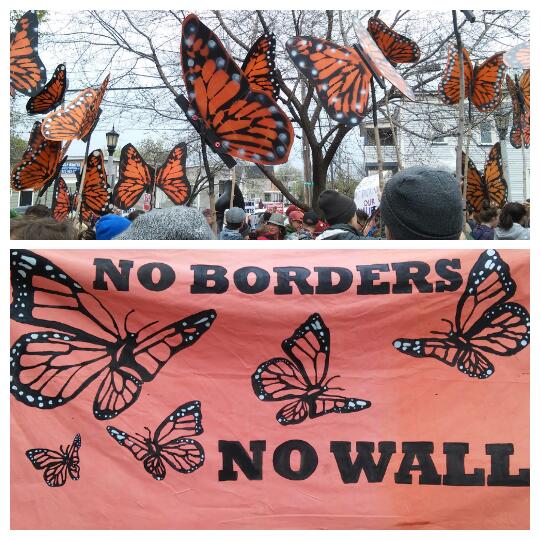 The crowd was punctuated with dozens of gorgeous monarch butterflies, symbolizing the beauty of migration. (Photo credit Dana Woodruff) 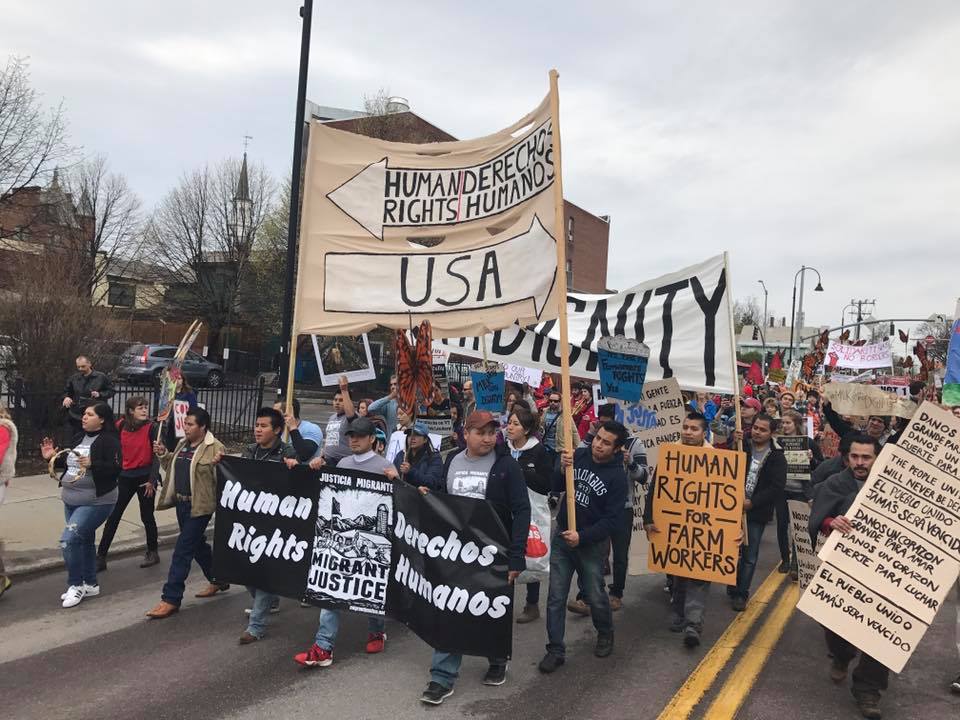 The march wound its way along Church St., Burlington's central commercial district. Shoppers and employees alike poked their heads out to snap pictures and give thumbs up to the marchers. (Photo Credit Vermont IWW) 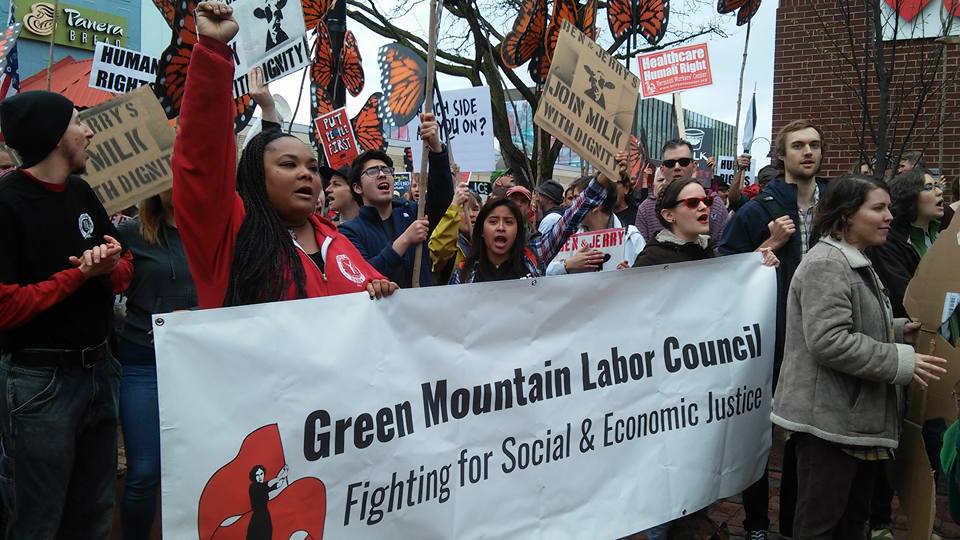 Dozens of organizations supported the march, many marching behind their own banners. (Photo Credit Dana Woodruff) 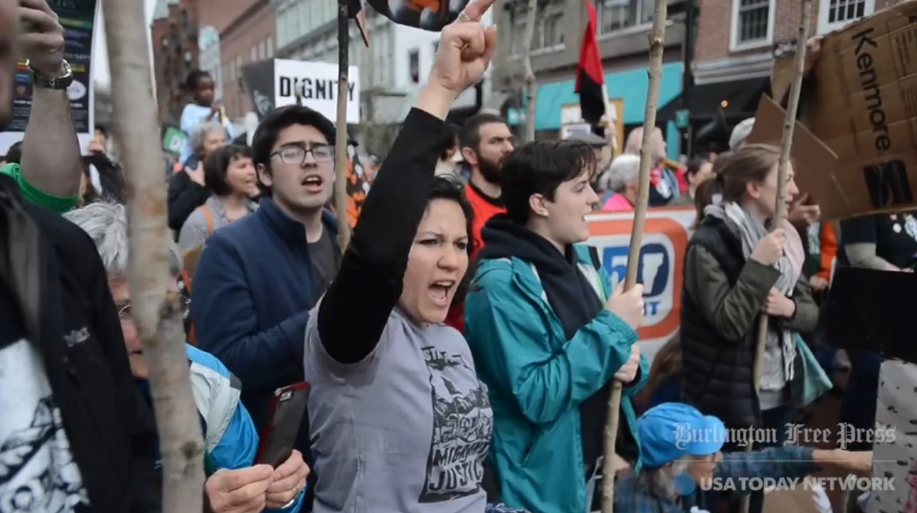 Spirits rose as the crowd neared Ben & Jerry's flagship store. The crowd broke out in a chant of "Sign now! Sign now!" urging the company to join the Milk with Dignity Program without further delay. (Photo Credit Burlington Free Press) 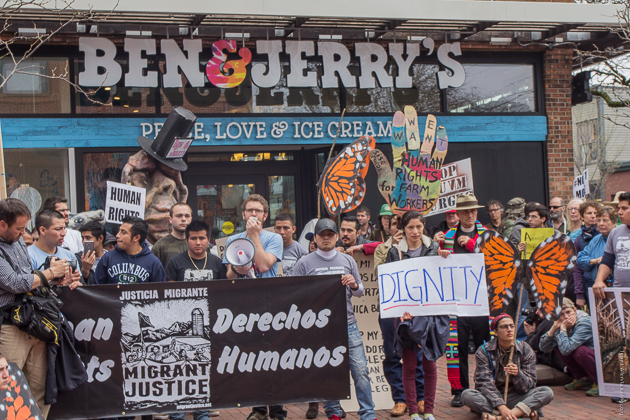 Dairy workers Wilmar Santiz and David Diaz spoke about the conditions on dairy farms in Ben & Jerry's supply chain. Wilmar laid out the history of delays and foot-dragging: "Today should be a celebration of International Worker's Day, but unfortunately we can't celebrate today. For nearly two years, this corporation has told us time and time again that we would have a contract, but where is it? They haven't just deceived us but they've deceived their consumers, too. Ben & Jerry's continues putting up excuse after excuse to avoid signing the Milk with Dgnity Program, but we aren't hearing that anymore. The time to sign is now!" (Photo credit Terry Allen) 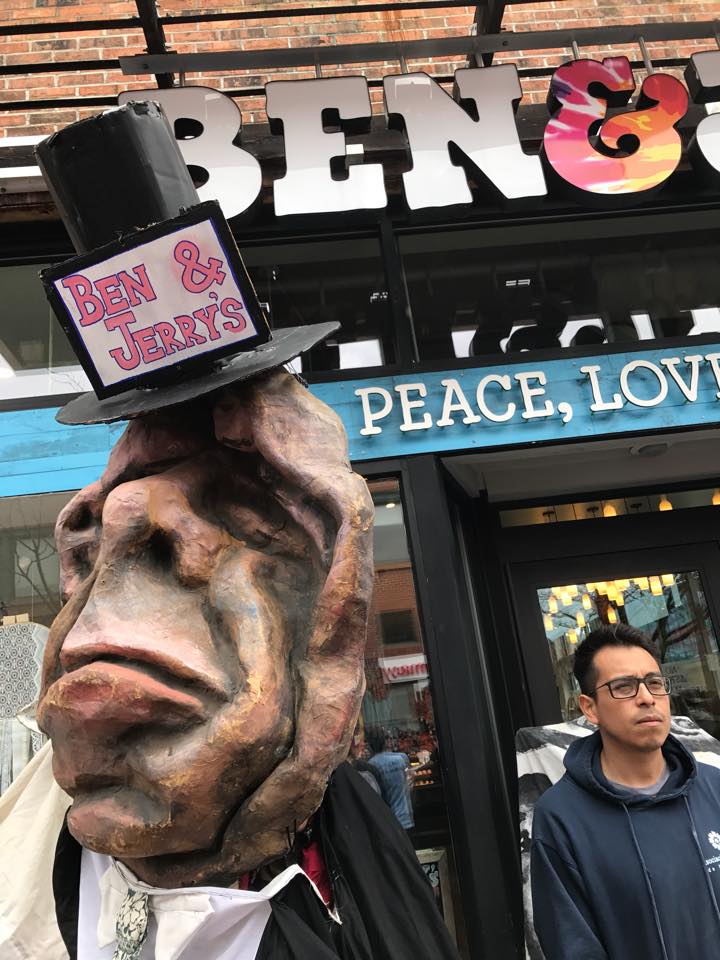 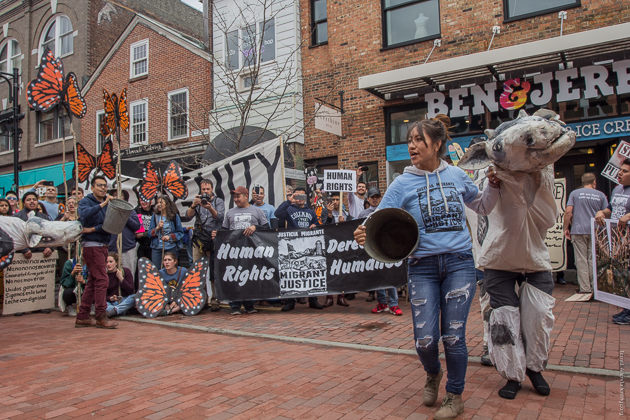 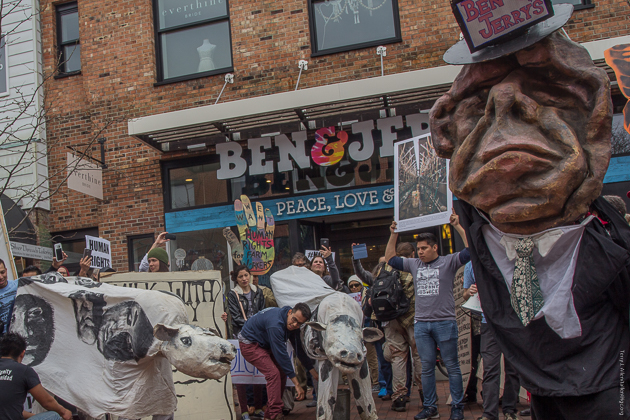 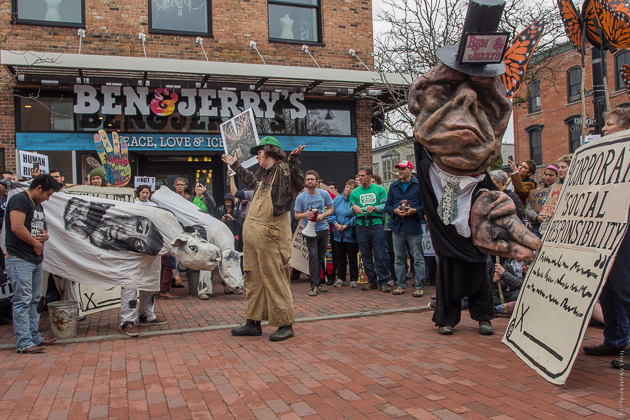 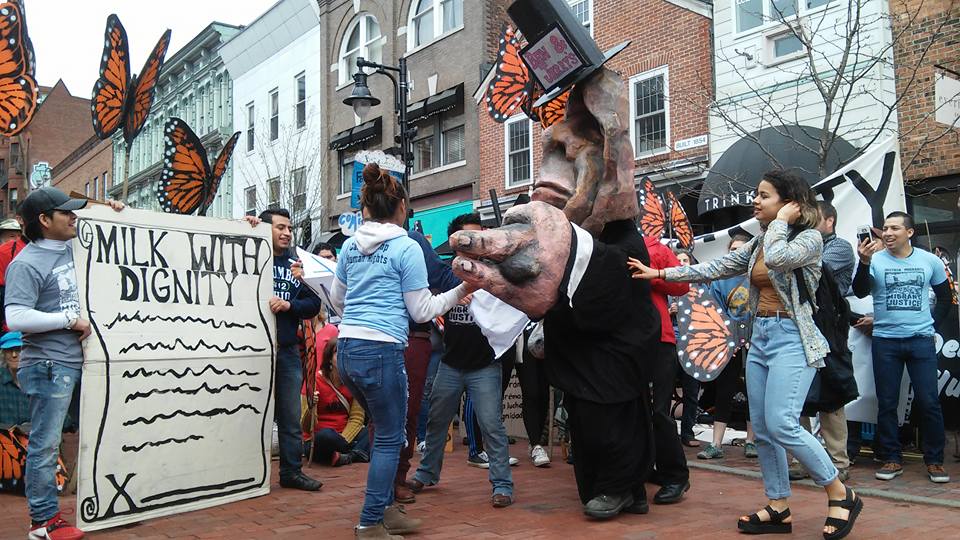 ...and organizing to win their dignity by forcing Ben & Jerry's to sign the Milk with Dignity agreement! (Photo Credit Dana Woodruff) 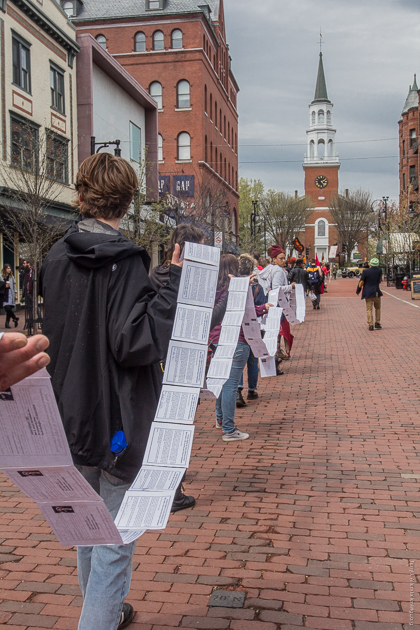 Migrant Justice then unveiled a "present" for Ben & Jerry's -- thousands of postcards taped together in a chain stretching up to the top of Church St, nearly 150 yards long! (Photo Credit Terry Allen) 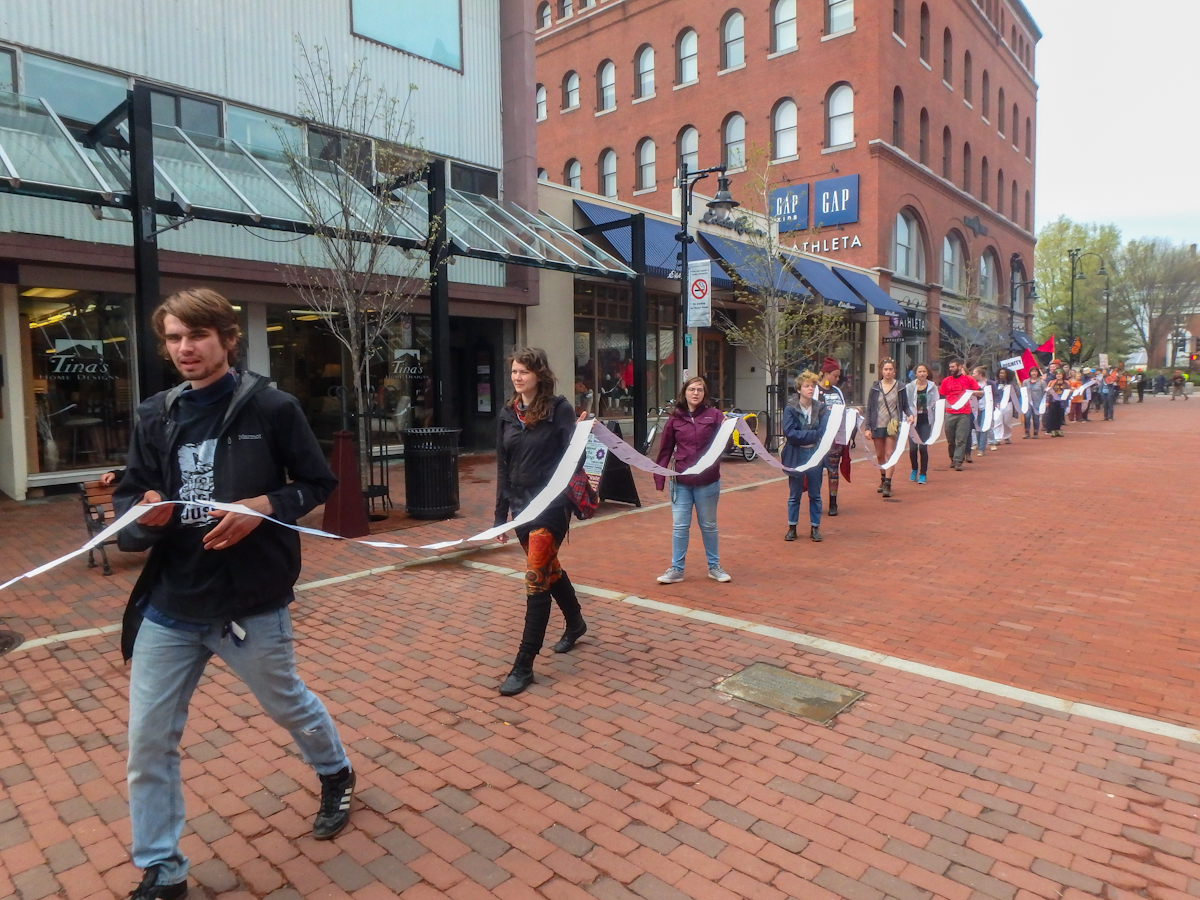 After stretching the postcard chain all the way out, it was time to give the company its Mayday present! (Photo Credit Arthur Hynes) 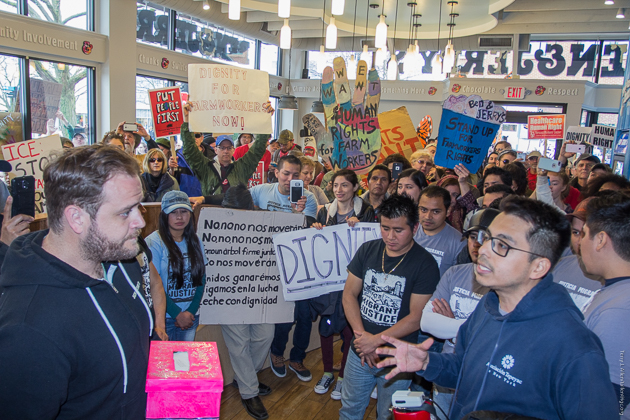 Supporters packed the Ben & Jerry's scoop shop, speaking with the store manager and asking him to pass along our demand to company CEO Jostein Solhiem. (Photo Credit Terry Allen) 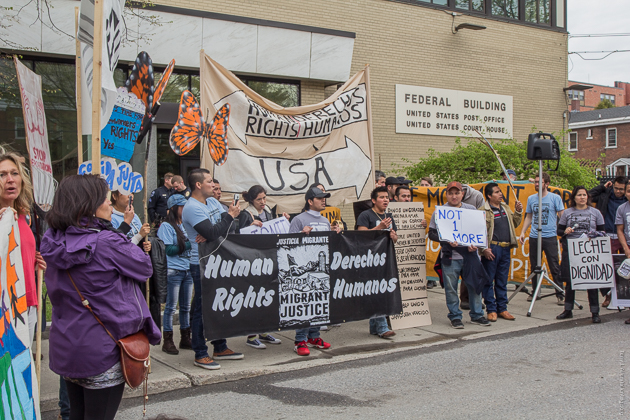 From Ben & Jerry's, it was up to the U.S. Federal Building, where speakers denounced the immigration arrests of worker leaders. (Photo Credit Terry Allen) 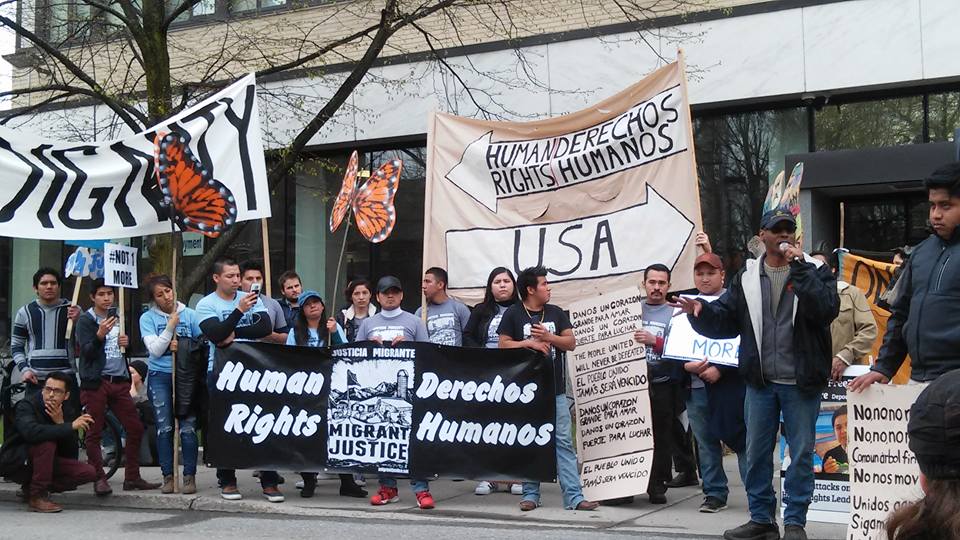 Mark Hughes (Justice for All), Max Barrows (Green Mountain Self-Advocates), and Ezlerh Oreste (Root Center for Social Justice) all spoke about the interconnectedness of our struggles and the need for unity and solidarity among the working class and in social justice struggles. Said Mark: "They’re trying to divide and conquer, to pit us against one another. But if we all stand together, there’s nothing they can do. The truth is, when we come together, there’s nothing on this planet that can keep us from winning." (Photo Credit Dana Woodruff) 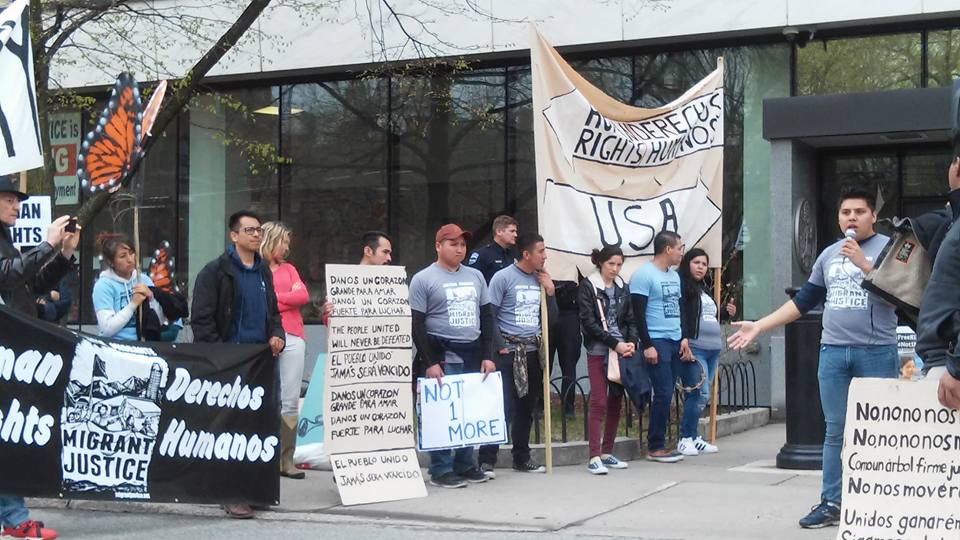 The rally ended with Kike, Miguel, Victor, and Zully -- four leaders who had been arrested by ICE and freed after public campaigns -- leaving posters from the campaigns for their liberation on the doorstep of the Federal Building. Kike closed the event with a resounding commitment to action:"We’re going to leave these signs on doors of the federal building to let them know that we are not afraid, that we’re still here, fighting for our rights" (Photo Credit Dana Woodruff) 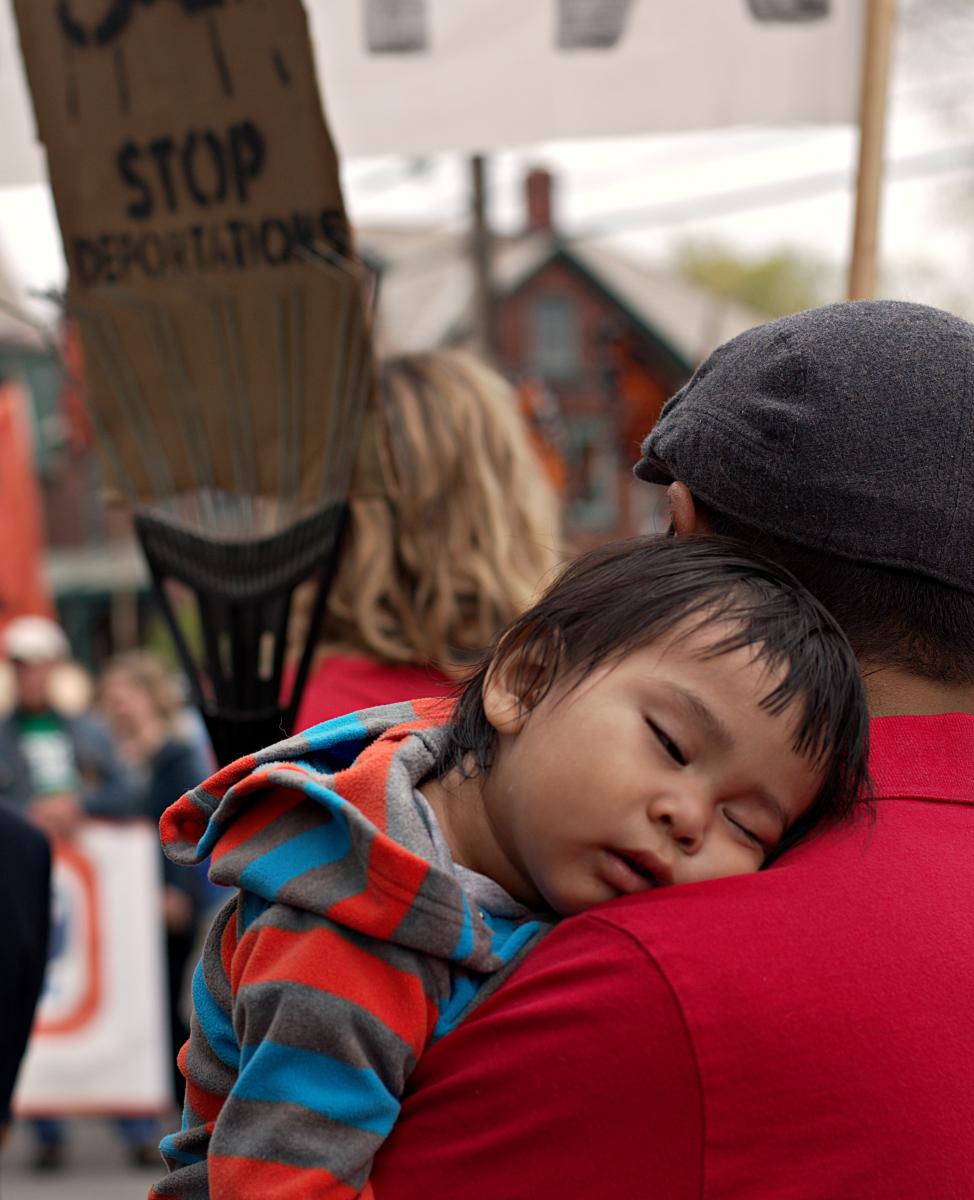 And after a long and spirited action, it was time for some rest and relaxation! (Photo Credit Q2 Photos)

The march was organized by Migrant Justice and the Vermont Human RIghts Council, composed of the Vermont Worker's Center, 350VT, Green Mountain Self-Advocates, VT Center for Independent Living, VT Interfaith Action, UE, United Academics, Pride Center, Rising Tide Vermont, Green Mountain Central Labor Council, Peace and Justice Center, and Justice for All. The event was also sponsored by the VT AFL-CIO and Rights & Democracy. Many thanks to sponsors, speakers, volunteers, and all who made the march possible!