The past two weeks have brought about a national reckoning with white supremacy that is without precedent in this country’s history. The horrific police murders of Breonna Taylor, George Floyd, and countless others have sparked an uprising that has spread from Minneapolis, to hundreds of communities in all fifty states, and now to countries around the world. This dynamic and evolving movement centers both an uncompromising denunciation of racist state violence and a radical affirmation that Black Lives Matter.

From our vantage point on dairy farms in rural Vermont, Migrant Justice is in some ways far removed from the urban rebellions propelling the movement forward. Yet in our conversations over the past two weeks, one thing has stood out: immigrant farmworkers in Vermont identify with Black people victimized by police violence and feel a deep kinship with the Movement for Black Lives.

“Our fight against racist discrimination must be unending. We stand together for our collective rights as human beings, demanding respect and equality for all. Without justice there can be no peace. Black Lives Matter!” -Elizabeth, Farmworker Coordinating Committee 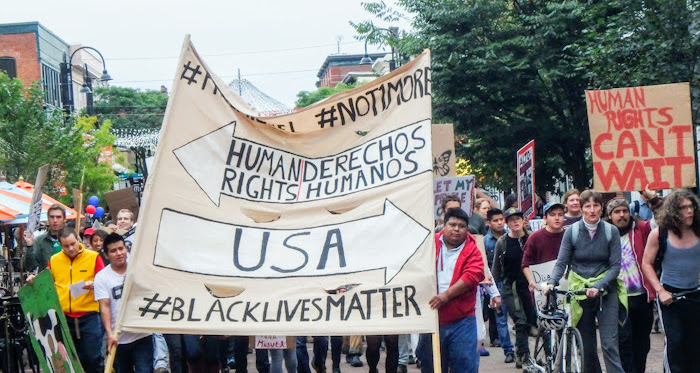 Our solidarity with this movement is rooted in our community’s own lived experience. The system that allowed Derek Chauvin to kneel on George Floyd’s neck for eight minutes and forty-six seconds as he pleaded for his life is the same system that funds oppressive militaries and right wing death squads in Latin America, creating the social conditions for forced migration. It is the same system that cages children, separates families, and sends thousands to their death in the Sonoran desert and the Rio Grande. And it is the same system that hunts down and deports immigrants in Vermont who leave their farms to drive to the store or the health clinic.

This understanding is at the root of our “No Polimigra” campaign to end the collaboration between police and federal deportation agents. These are two institutions designed to uphold racial inequities, both locally and globally, and they are strengthened when they work together. In turn, when we can drive a wedge between them, our movements become stronger and our communities safer.

This year, we have organized alongside local communities to win No Polimigra campaigns in three cities and towns in Vermont – Burlington, Hartford, and Norwich – implementing some of the strongest policies in the country to prevent police-ICE collaboration. (If you haven’t seen the jubilant reaction following Burlington’s vote to adopt the policy, check it out now) This past week, we held a training with more than fifty local activists ready to launch campaigns in many more towns across the state.

Do you want to join with your neighbors to push your town to adopt a No Polimigra policy for its police department? Fill out this form and we’ll connect you with others in your community!

As we continue to push this campaign forward, we also recognize that this work cannot happen in isolation. What’s more, this moment requires us all to look to Black communities most impacted by police violence for leadership, particularly to the Black youth leading the movement in the streets, both in Vermont and around the country.

The undeniable north star of this movement is the call to abolish policing. This demand builds on decades of work by Black feminist scholars; it begins with the understanding that policing in the United States has always been designed to uphold oppression and inequity, and it asks us to radically reimagine the social structures and relationships needed to create true community wellbeing.

In Burlington, the Vermont Racial Justice Alliance has launched a divest/invest campaign. Over the past week, this campaign has mobilized hundreds of people to give hour after hour of testimony in city meetings to echo the demands of a 30% reduction of the Burlington Police Department budget, an end to policing in Burlington schools, and the firing of abusive officers. The outpouring of energy and support has been remarkable.

On Monday night, the Burlington City Council will meet to hear the Mayor’s budget proposal. Burlington residents: sign up now to speak during the zoom meeting (public comments begin 7:30pm) and support the demands of the VT Racial Justice Alliance!

Just as systems of violence and oppression are linked, so too are our movements for liberation. If you have joined the immigrant rights movement in the call to Abolish ICE, now is the time to join the campaign to Defund the Police.