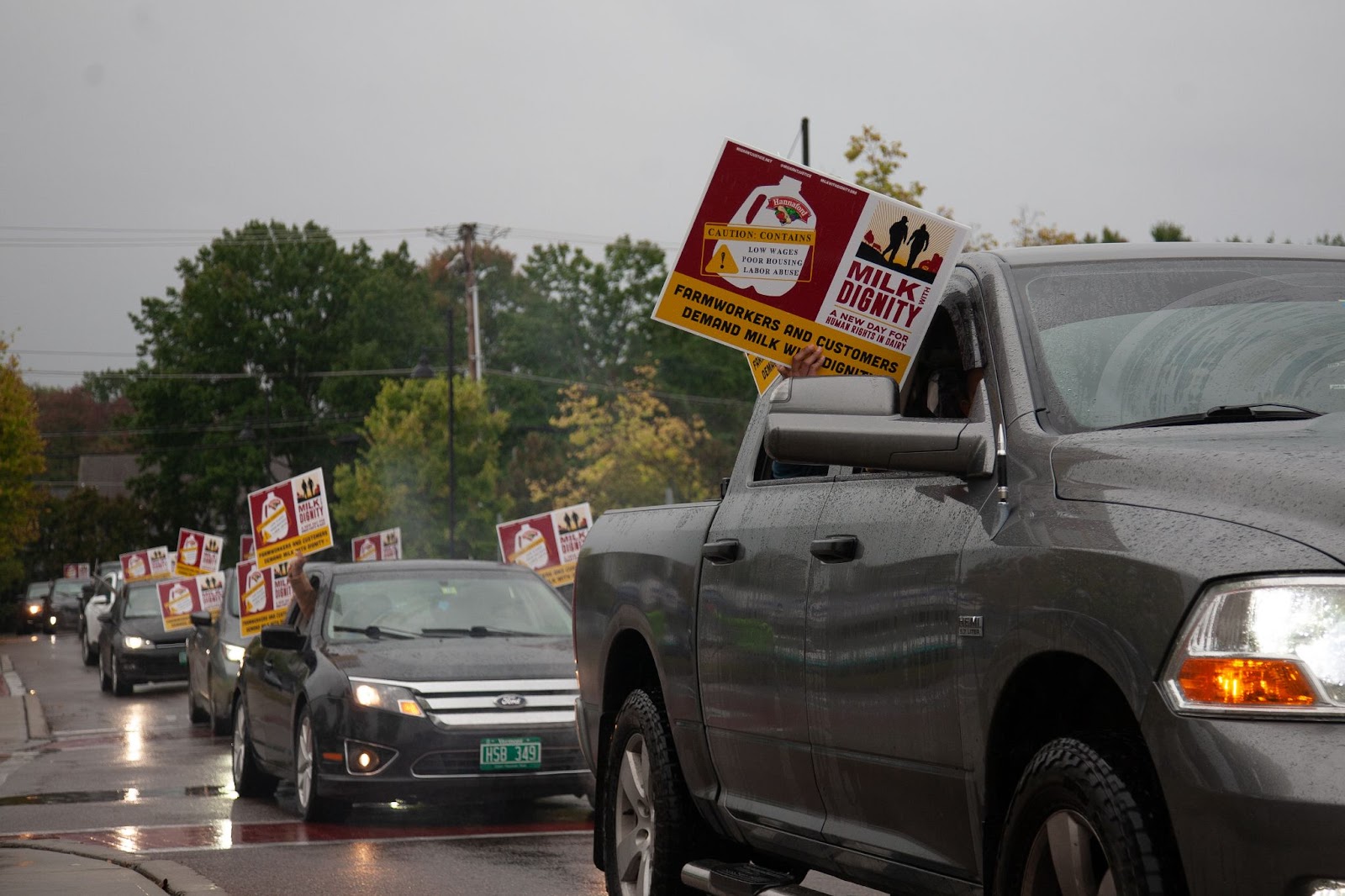 10/2 Burlington, VT: The tour kicked off with a celebration of 4 years since Ben & Jerry’s joined Milk with Dignity, launching the program. We ended the celebration with a car caravan to the nearby Hannaford, urging the supermarket chain to follow in Ben & Jerry’s footsteps 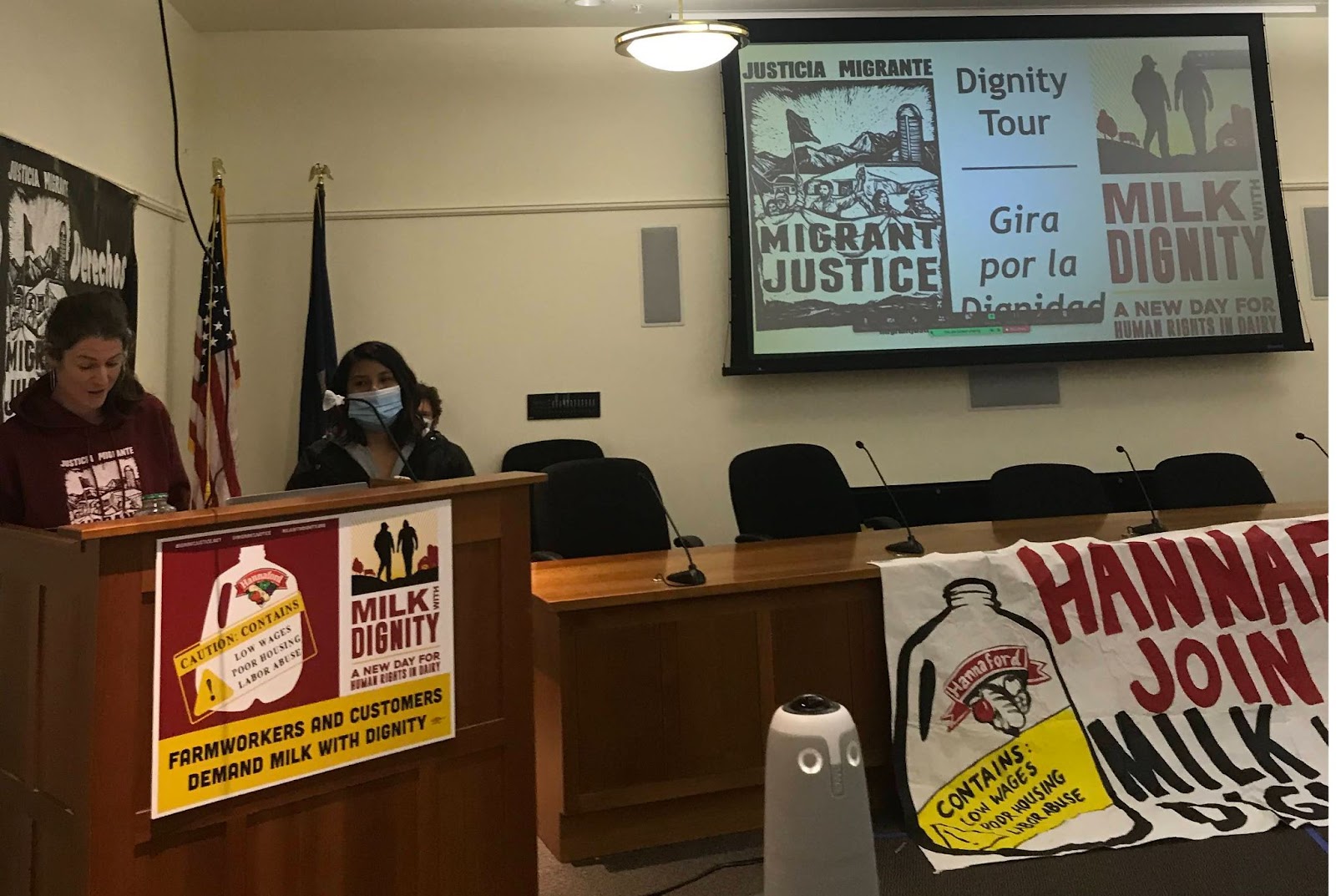 10/5, York, ME: We started the first leg of the tour in Maine with a presentation at the York Public Library, hosted by Southern Maine Showing up for Racial Justice 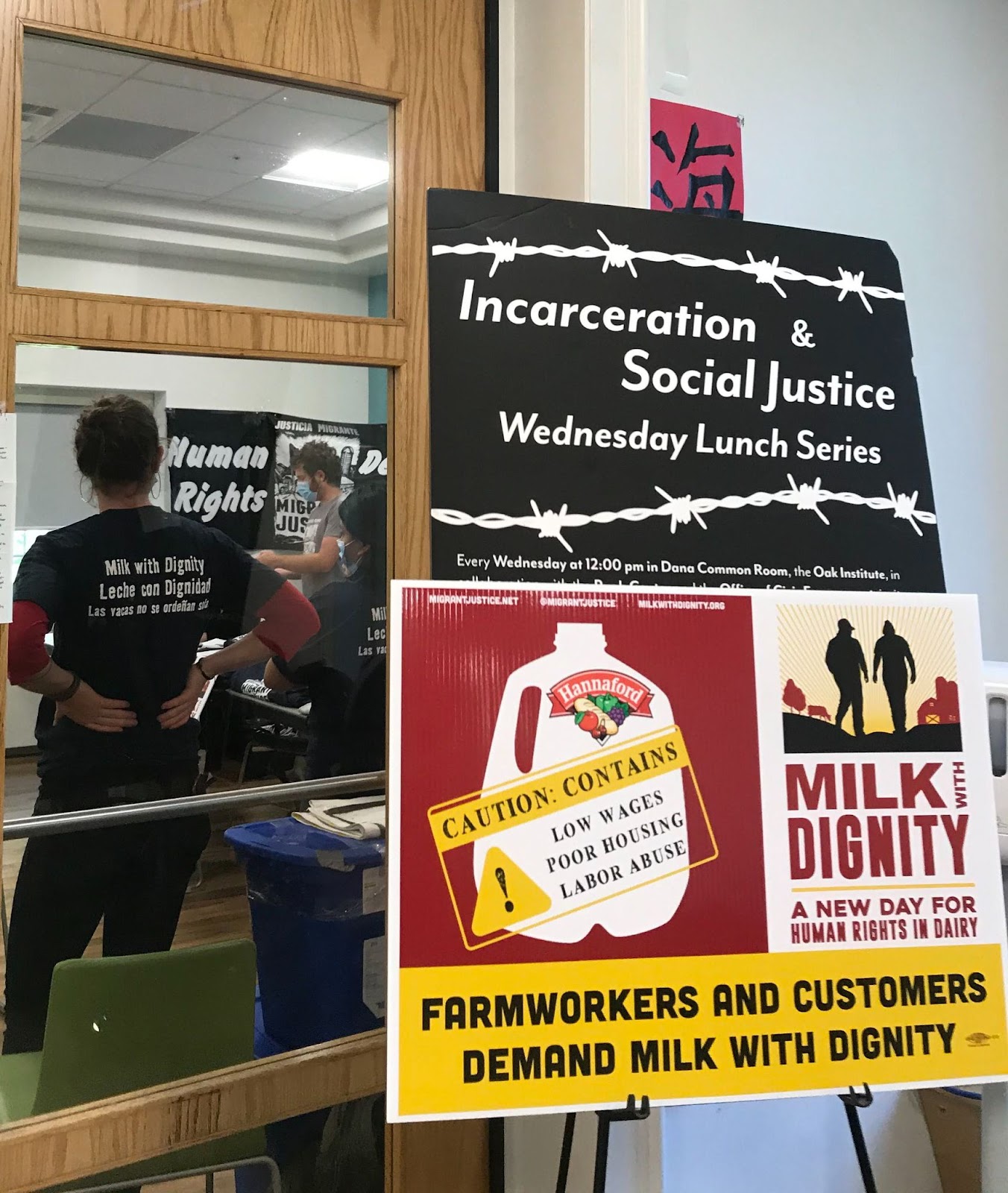 10/6, Waterville, ME: We continued up the Maine coast to Colby College, where the Oak Institute for Human Rights hosted us as part of a lecture series 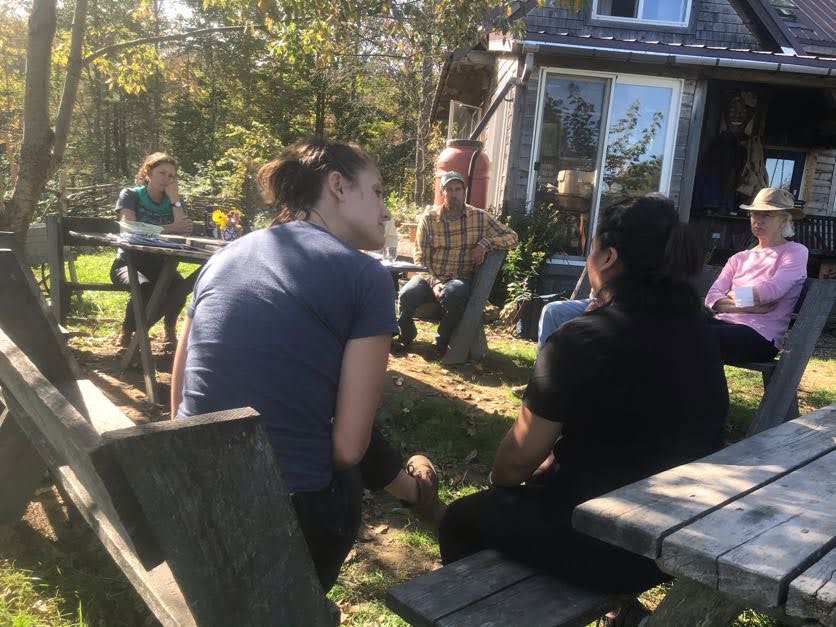 10/7 Belfast, ME: We stopped by the Possibility Alliance in Belfast for a lunch presentation

10/7 Freedom, ME: And that night, met with a big crowd on Southpaw Farm

10/8 Portland, ME: We traveled back down the coast to meet with legislators and community members at a stop hosted by Maine DSA 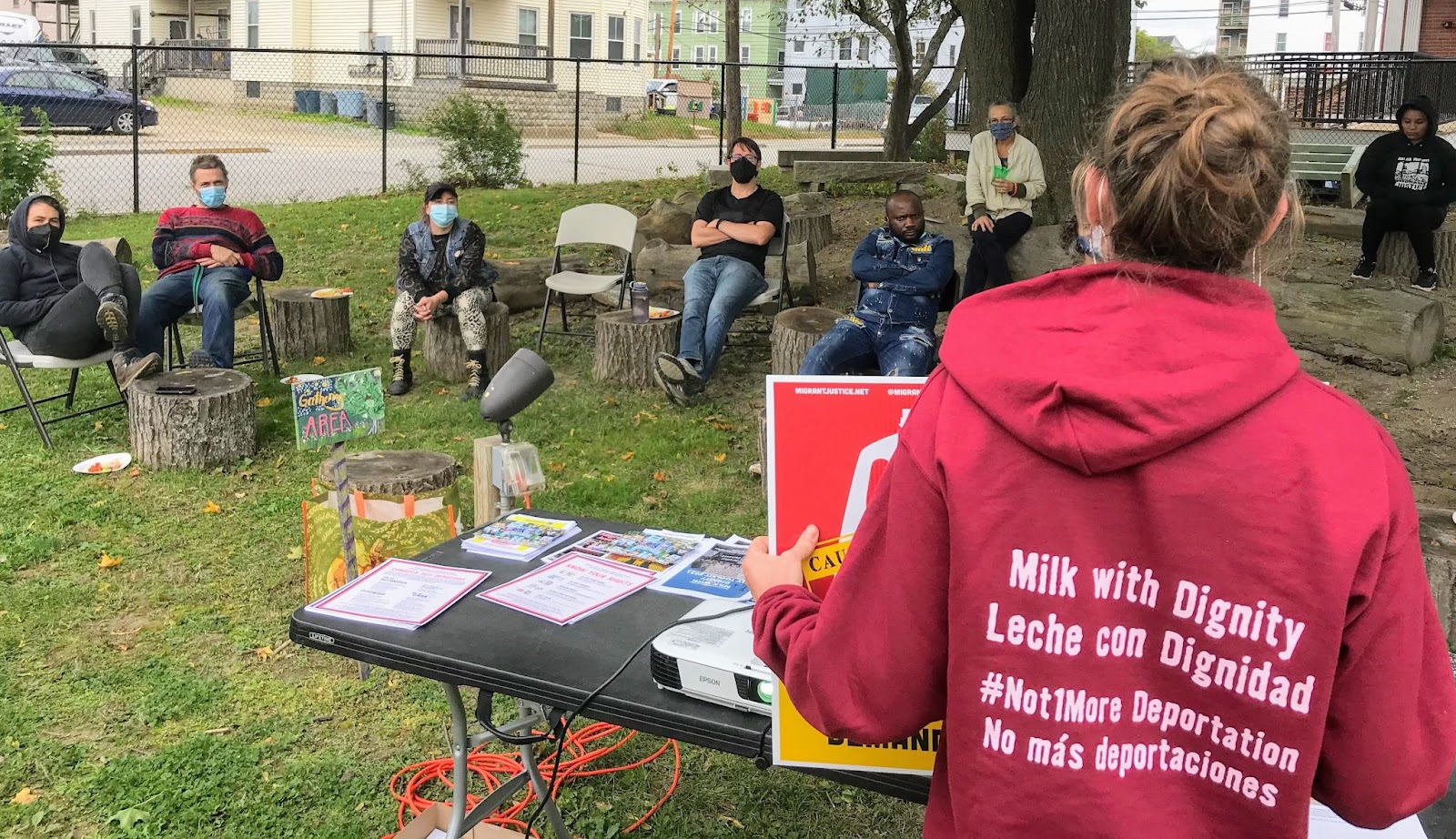 10/9 Lewiston, ME: We wrapped up the Maine leg of the tour with a presentation in St. Mary’s Nutritional Center hosted by Central Maine Showing Up for Racial Justice 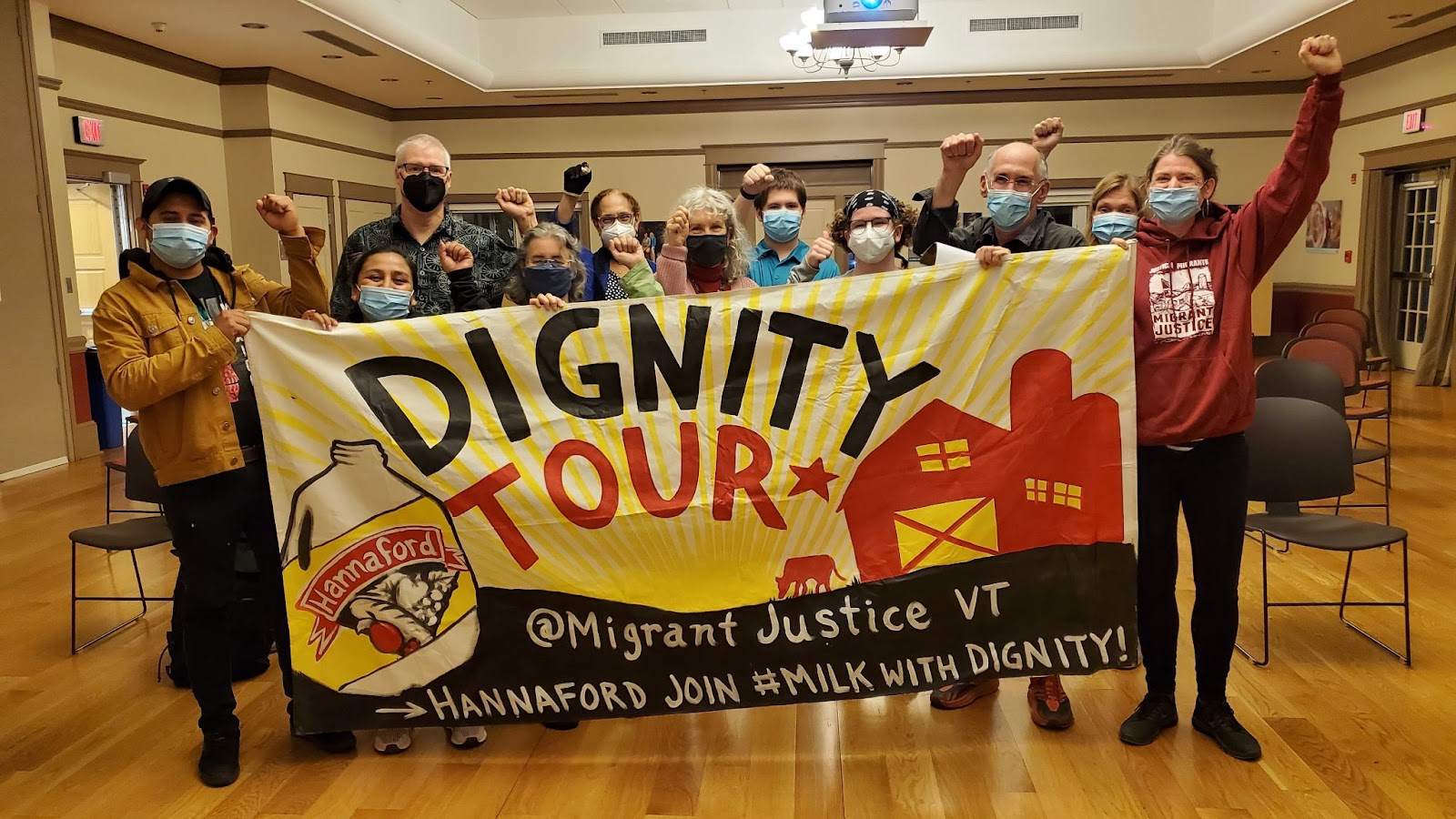 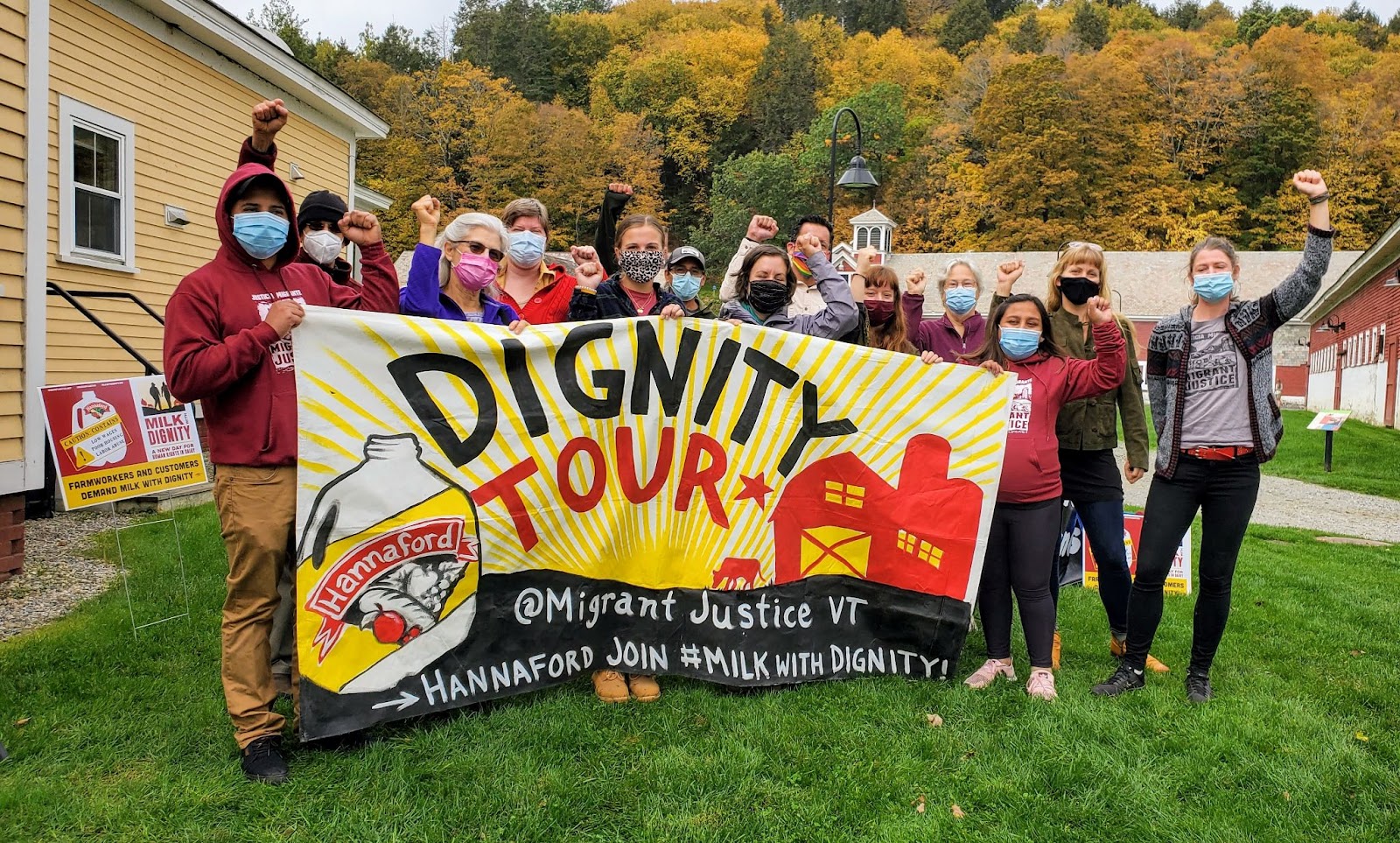 10/13, Brattleboro, VT: The next morning, we headed over to the Retreat Farm for a presentation hosted by the Groundworks Collective 10/13, Rutland, VT: And that evening, we headed north for a presentation hosted by Castelton Indivisible at the Vermont Farmers Food Center 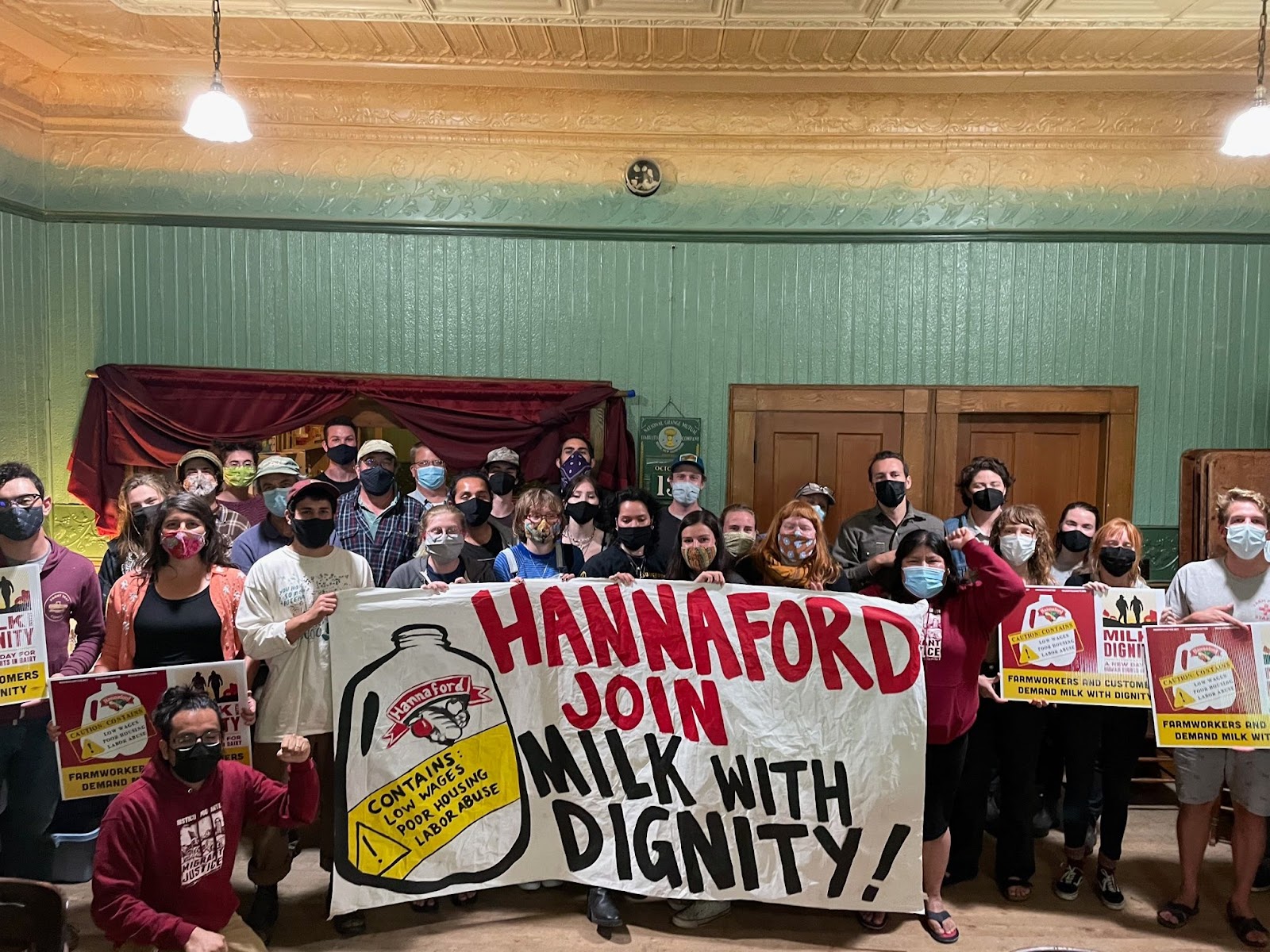 10/13, Hardwick, VT: Meanwhile, across the state, another group presented with a huge crowd at the Hardwick Grange Hall, hosted by the Small Farm Guild 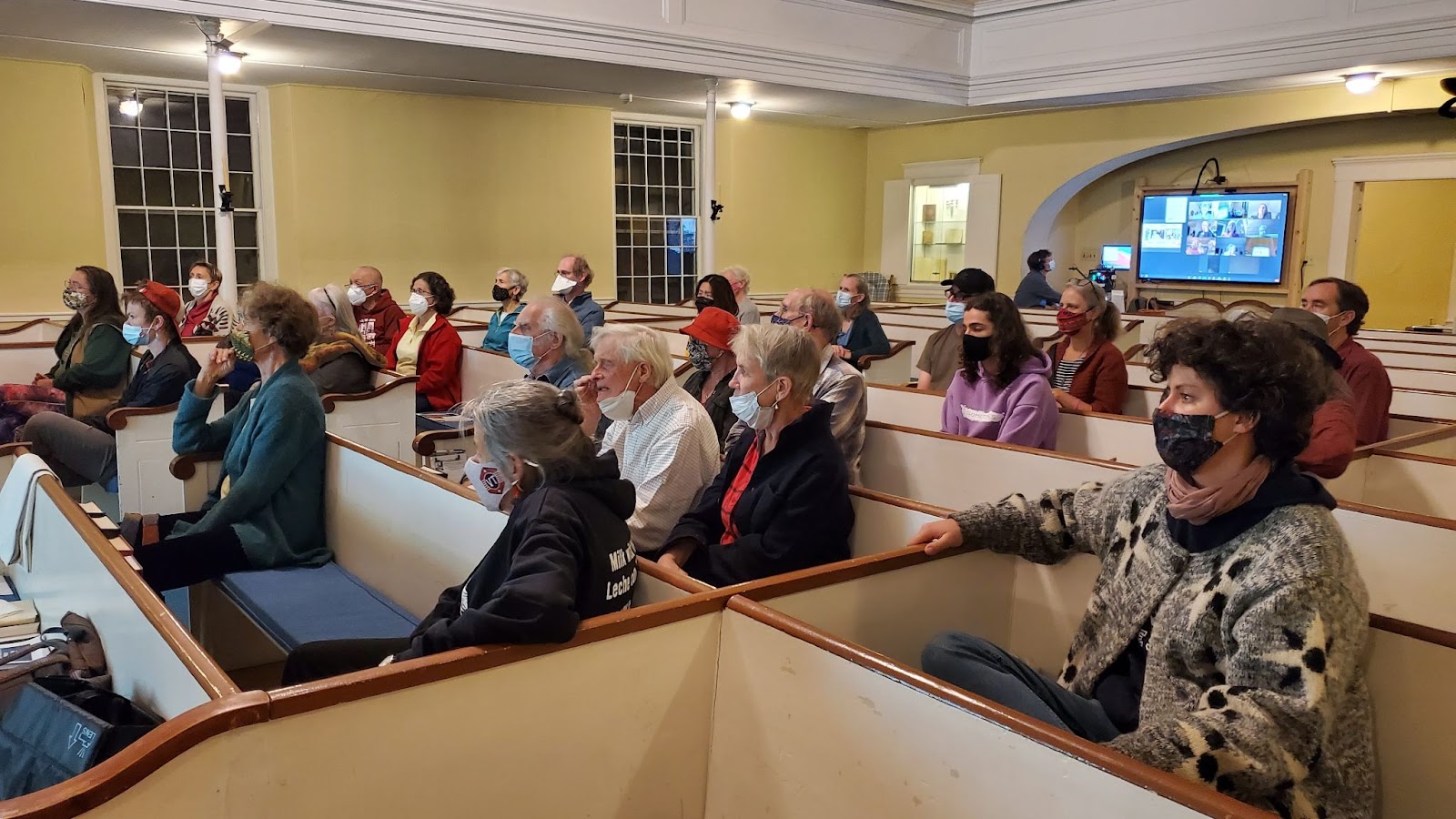 10/15, Thetford, VT: The Upper Valley Affinity Group hosted us at the Thetford Hill Church for the first of several presentations in the Upper Valley region of Vermont and New Hampshire 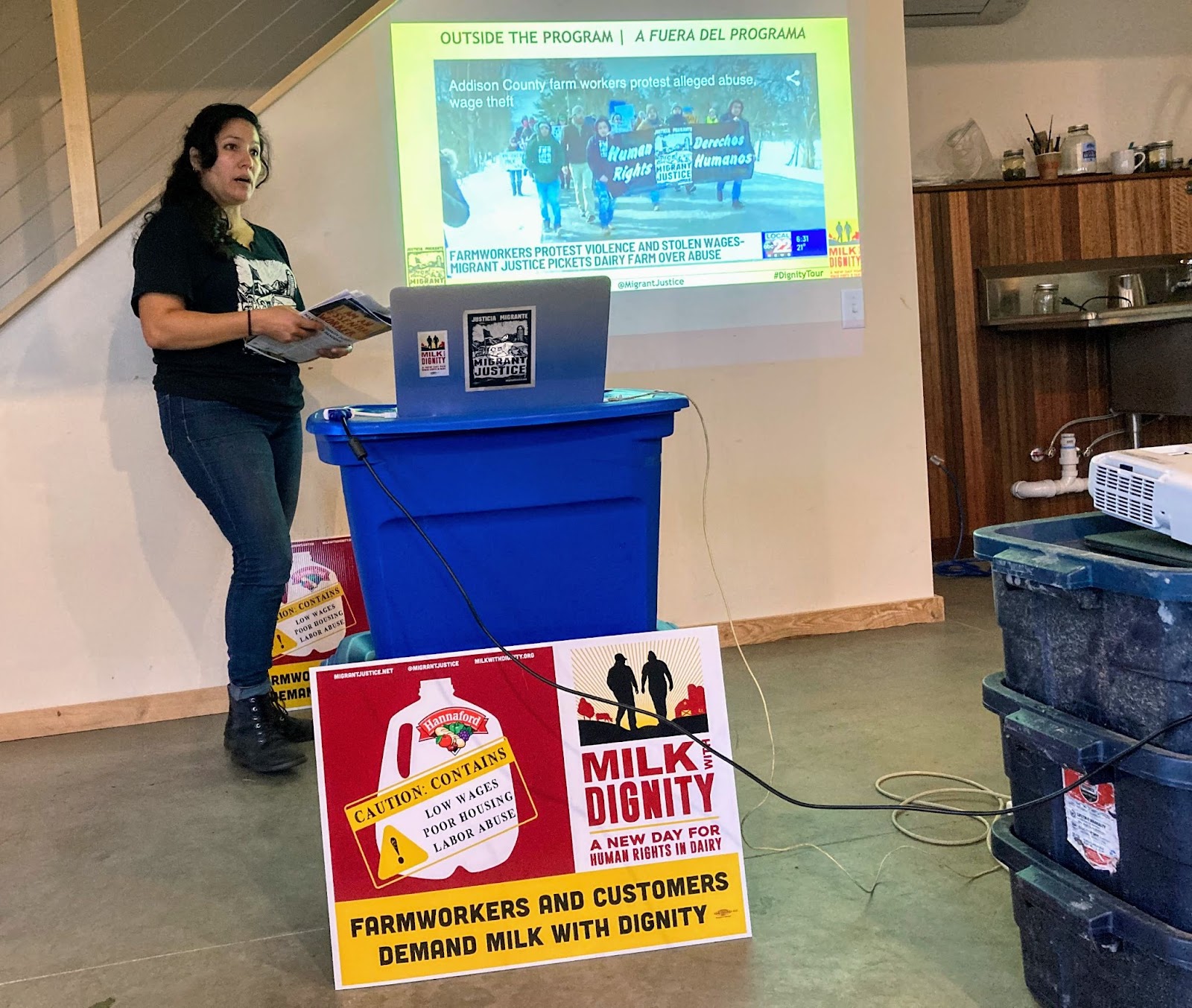 10/15, Albany, NY: And that same day, a crew took off for New York state, making our first stop in Albany to meet with the Radix Center, a community garden and local food hub 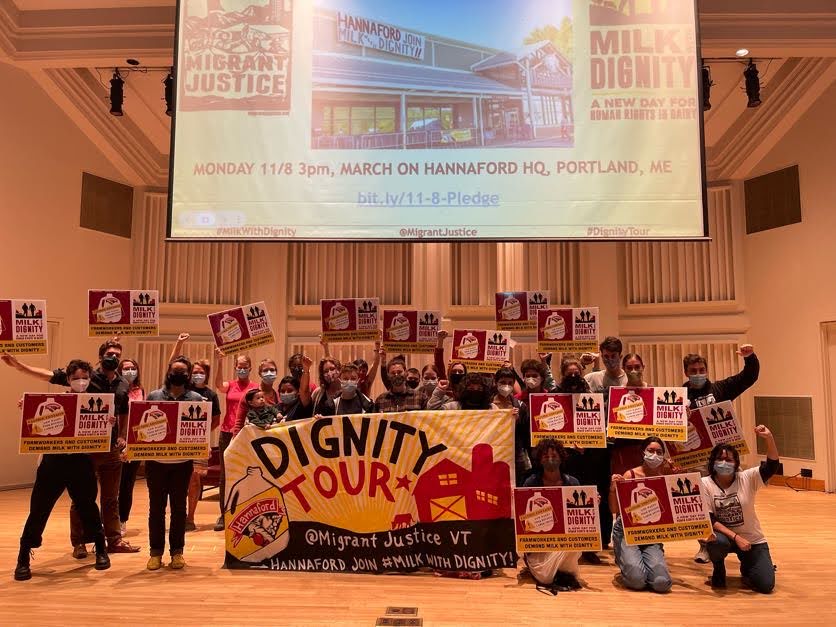 10/16 Annandale-on-Hudson, NY: We continued down the Hudson Valley for a big presentation at Bard College, hosted by BardEATS 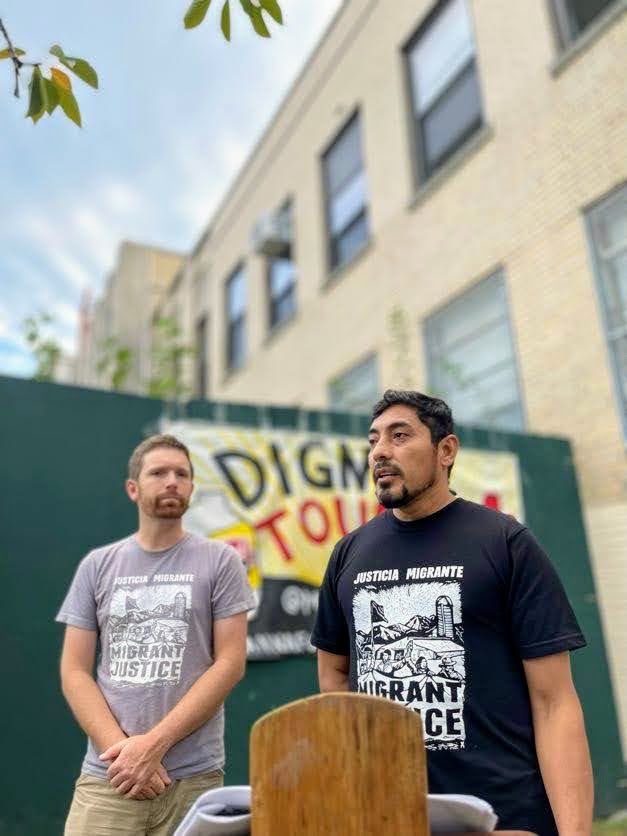 10/16, Brooklyn, NY: And that afternoon, we made it to NYC for a presentation with middle-schoolers and faculty at the Brooklyn Urban Garden Charter School 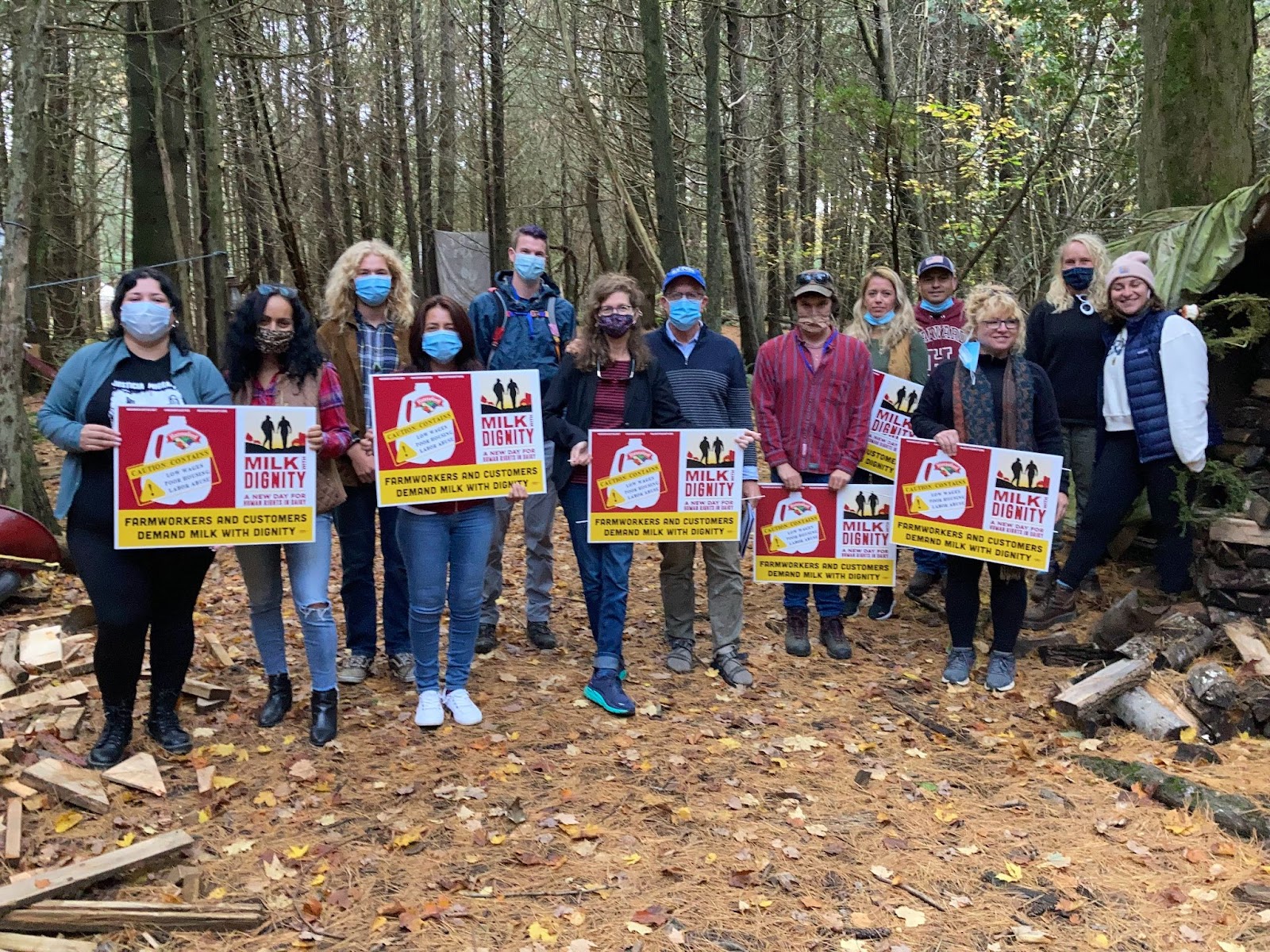 10/17, Monkton, VT: Back in Vermont, we joined the Willowell Foundation’s Perennial Harvest Festival 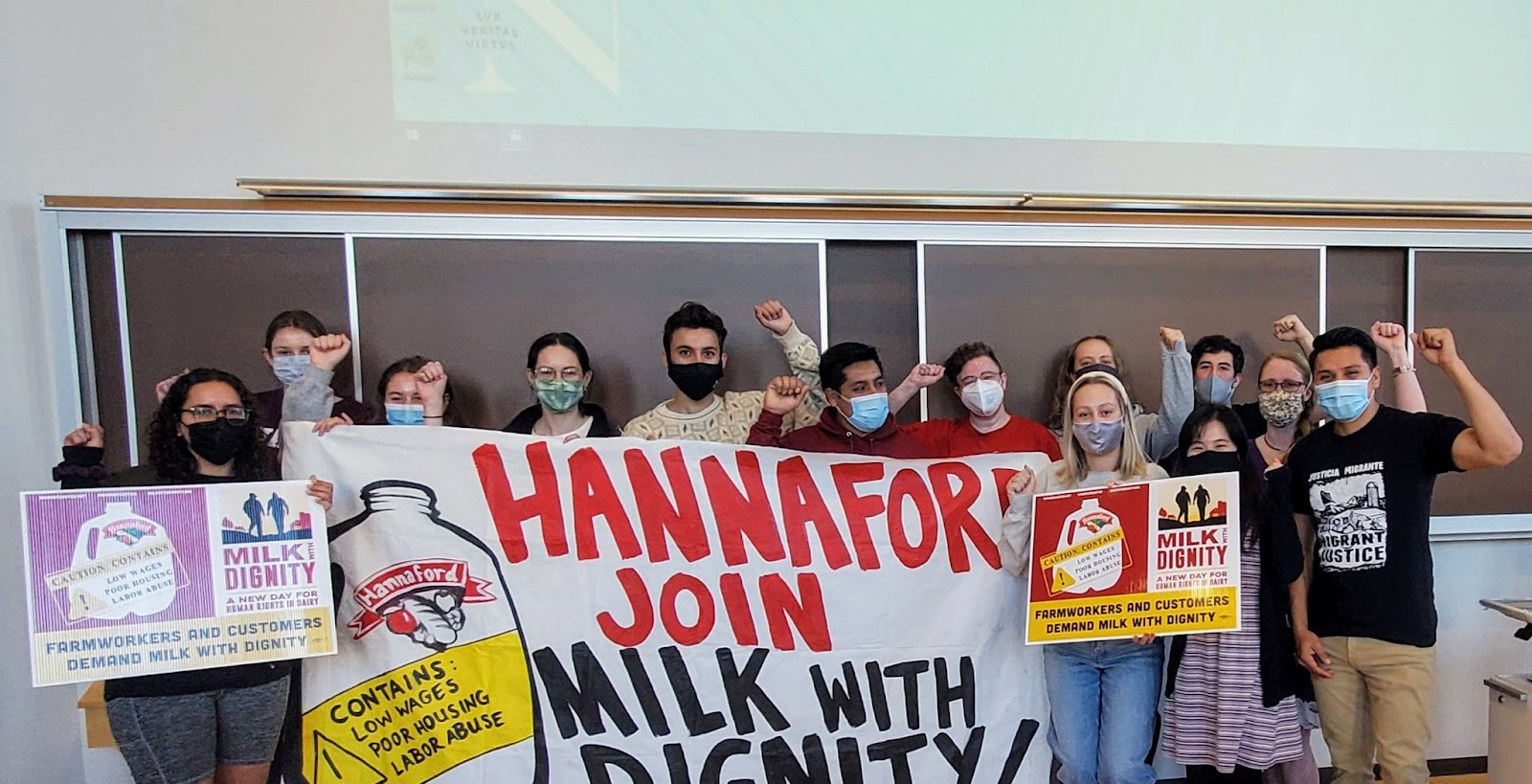 10/17, Boston, MA: Meanwhile, down in Boston, a crew presented with students at Northeastern University, hosted by the NU Law School’s Students for Immigration Justice group 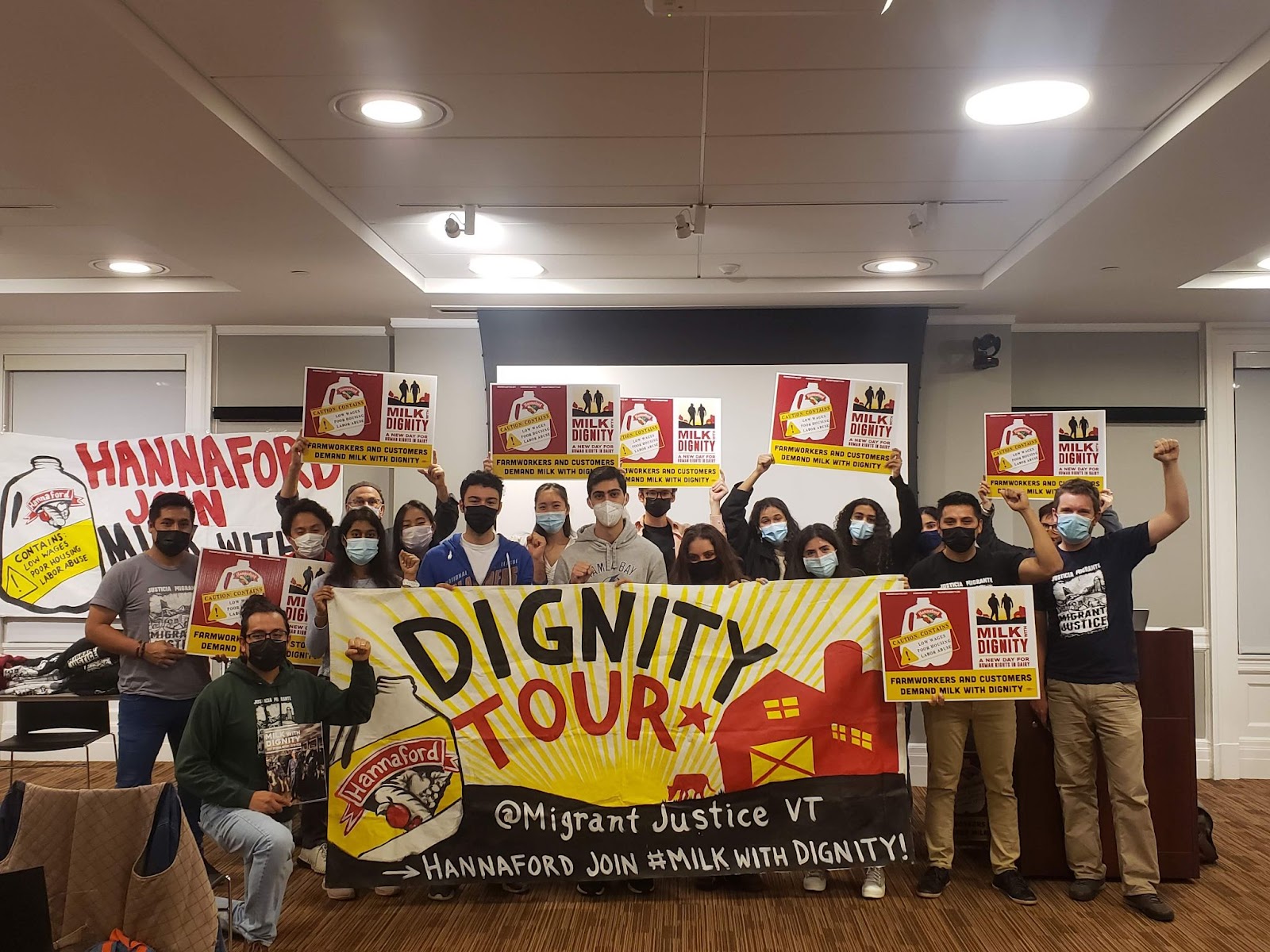 10/18, Providence, RI: From Massachusetts, we traveled down to Rhode Island to present at Brown University, hosted by Brown’s CareFree Clinic 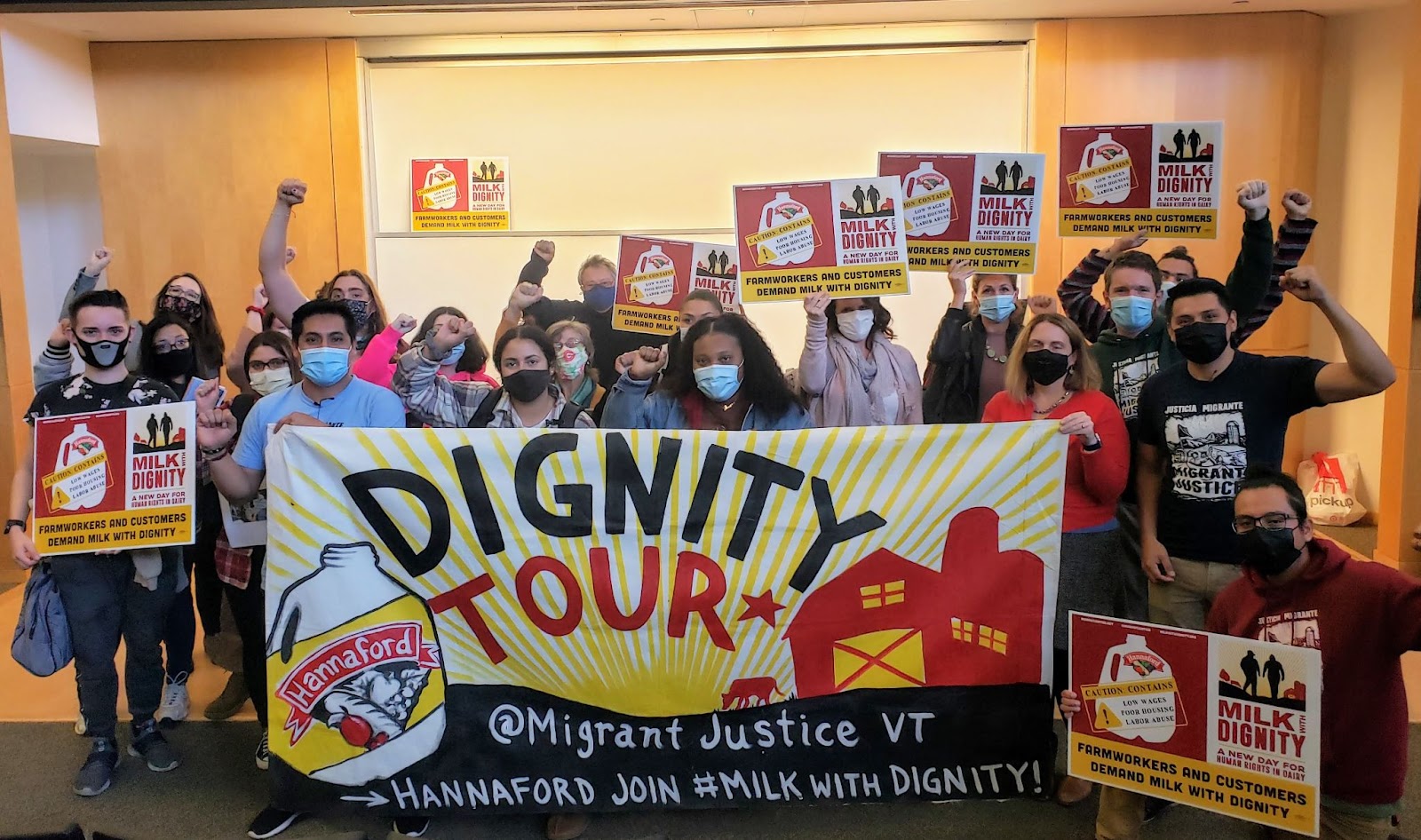 10/19, Kingston, RI: The next morning, we continued heading south to the University of Rhode Island, meeting with students and faculty in a presentation hosted by the Sociology Department 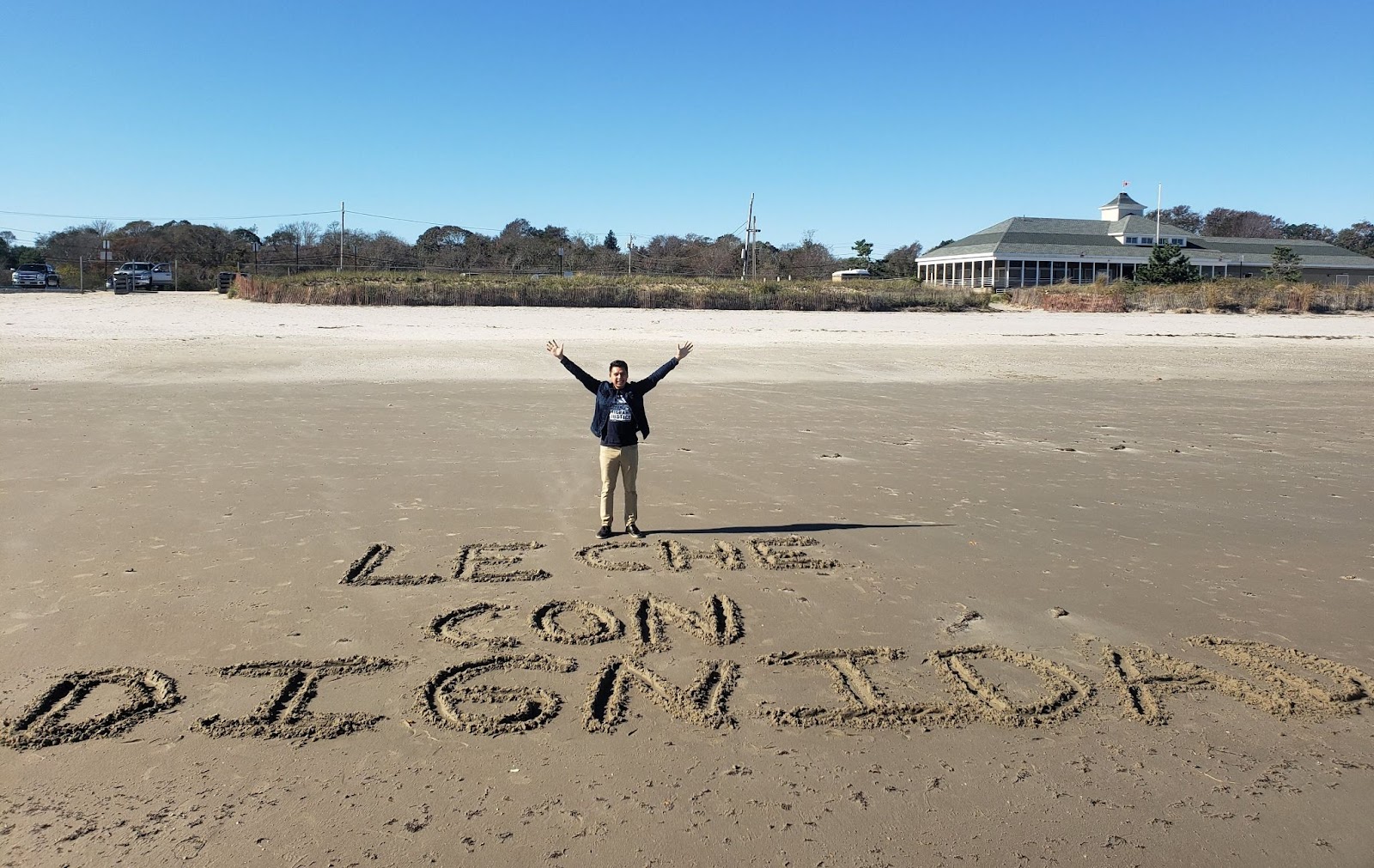 After our URI presentation, we made a quick stop by the beach to leave our mark in the sand... 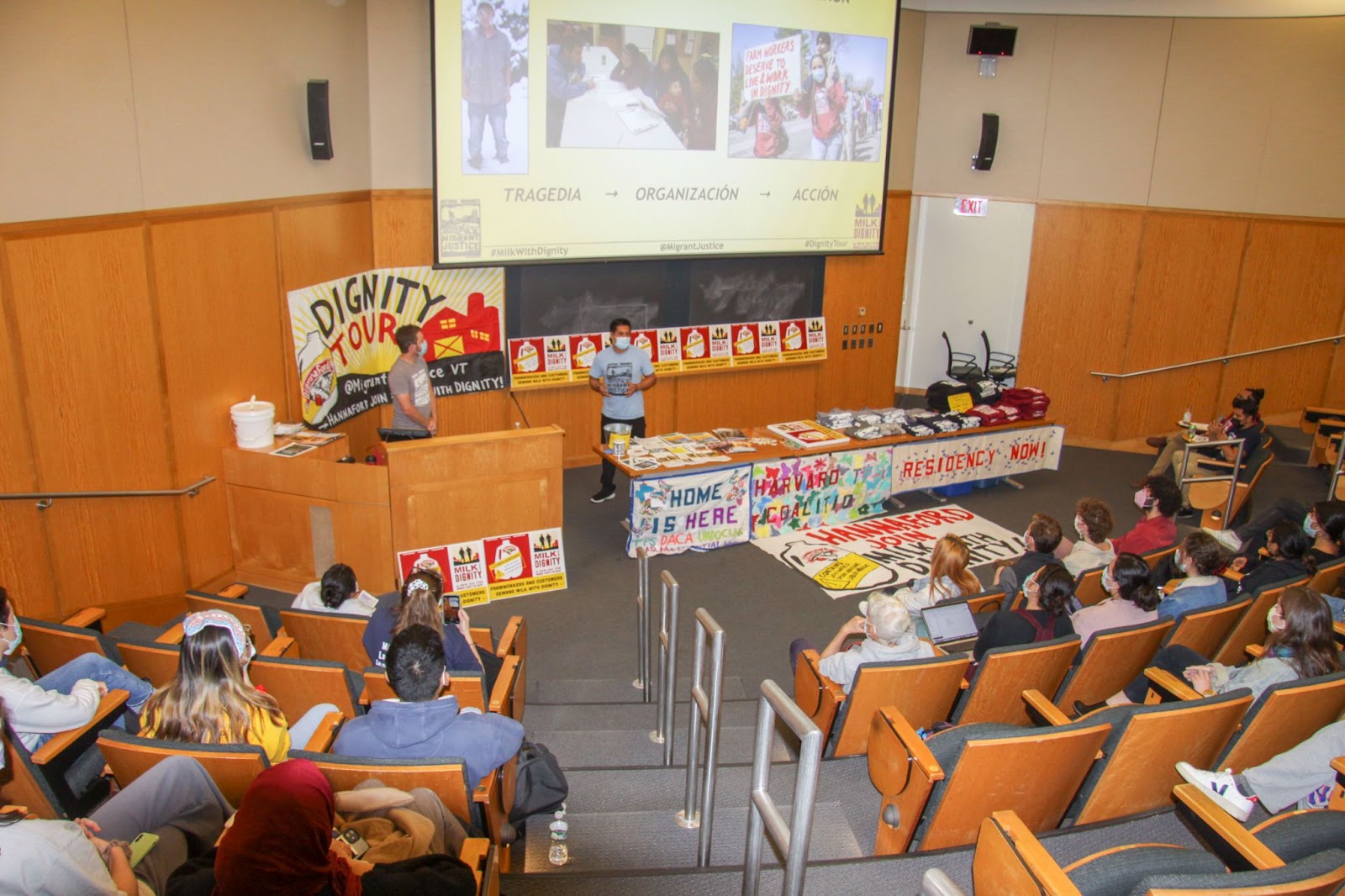 10/19, Cambridge, MA: And then it was back north to Massachusetts to present at Harvard University, hosted by a collection of groups including the Harvard TPS Coalition, Harvard College Act on a Dream, Harvard Student Labor Action Movement 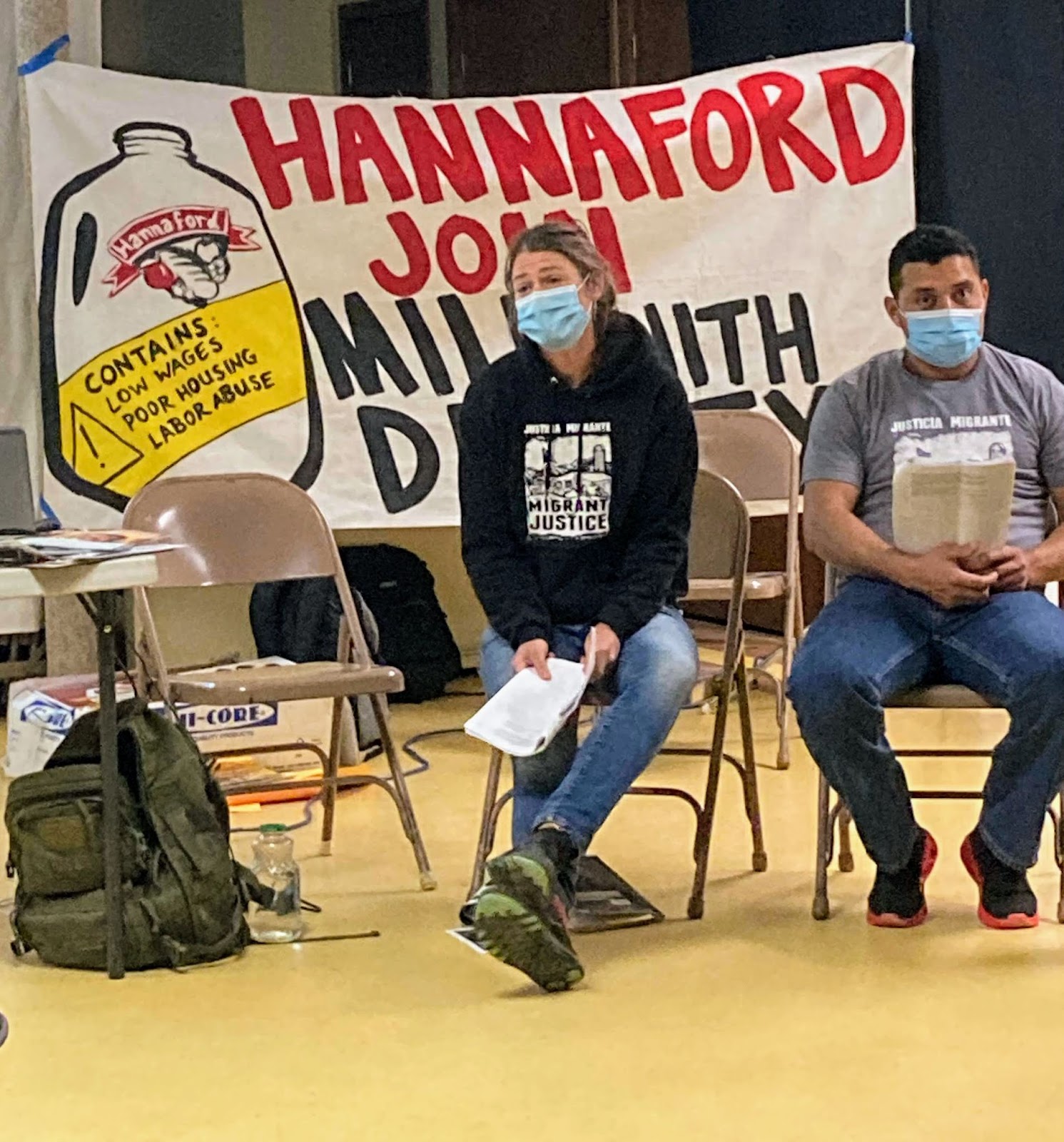 10/20, Barre, VT: The next day, we were back in Vermont, presenting to a group at the Presbyterian Church of Barre hosted by Rural Vermont 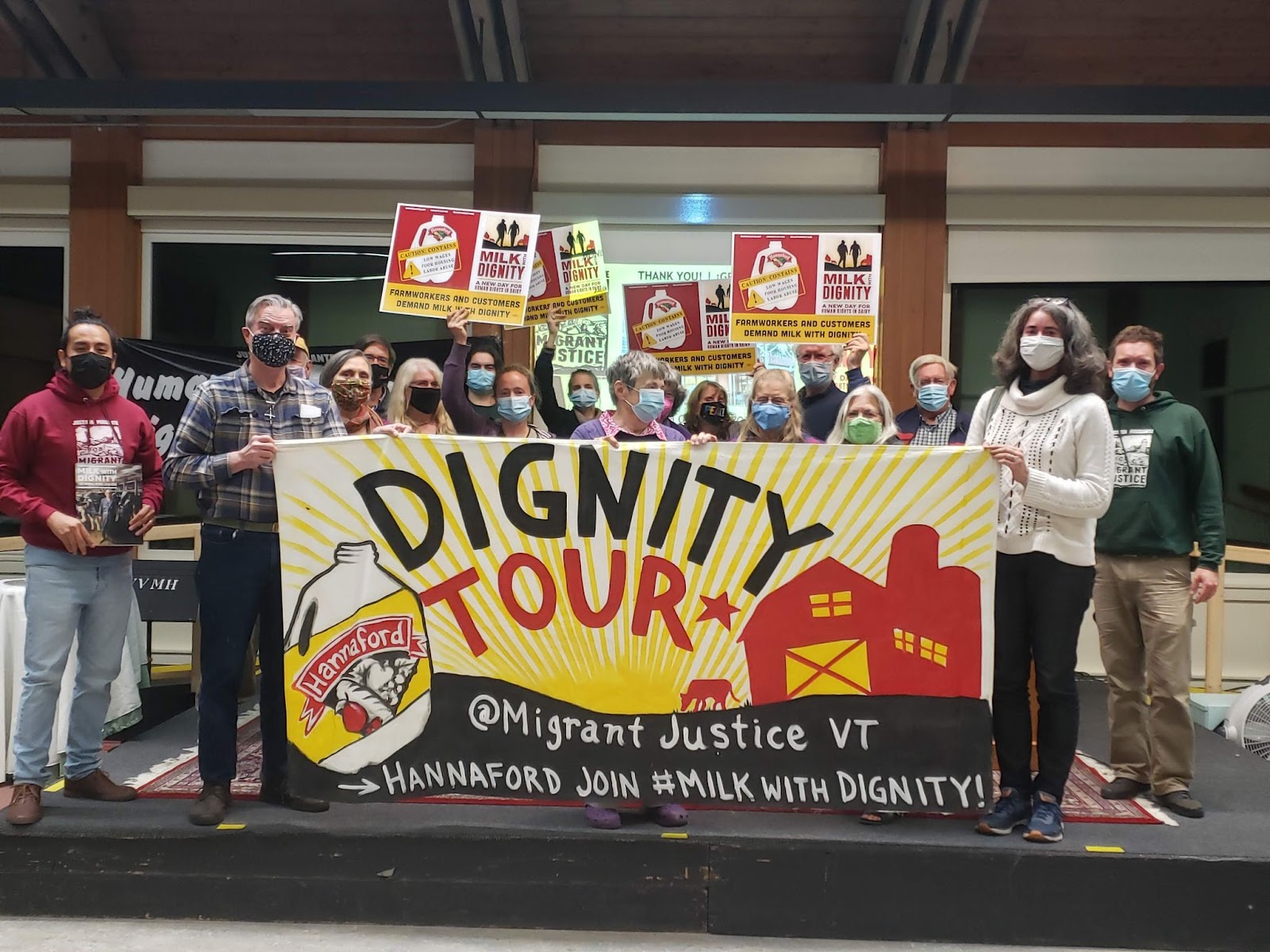 10/22, West Brattleboro, VT: After another webinar virtual presentation, we hit the road again. The All Souls Unitarian Universalists hosted us at their Meeting House in southern Vermont 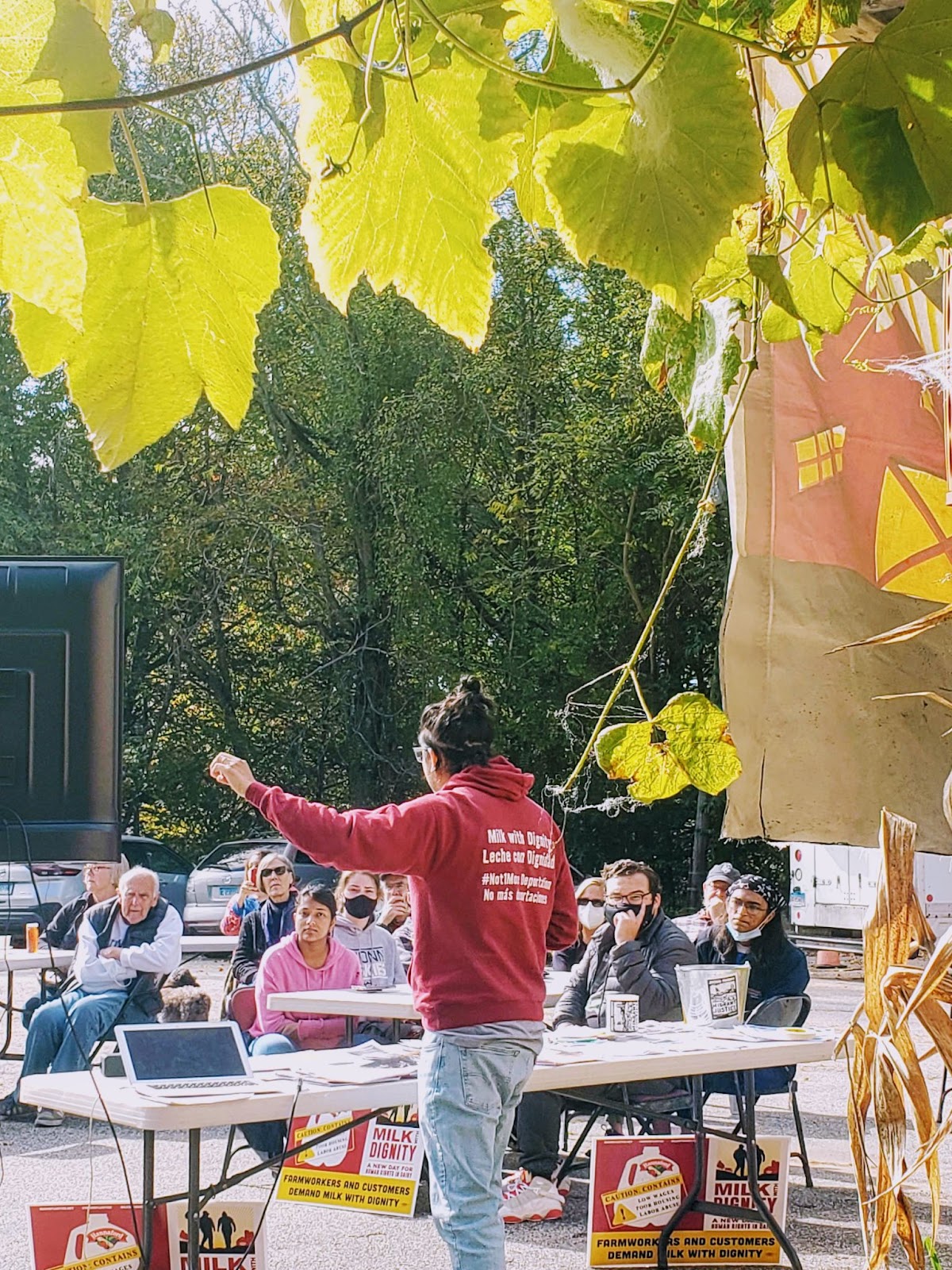 10/23, WIndham, CT: We met with community members and UConn students at community kitchen and food hub CLiCK Willimantic, giving our first presentation in Connecticut, the 7th state on the tour 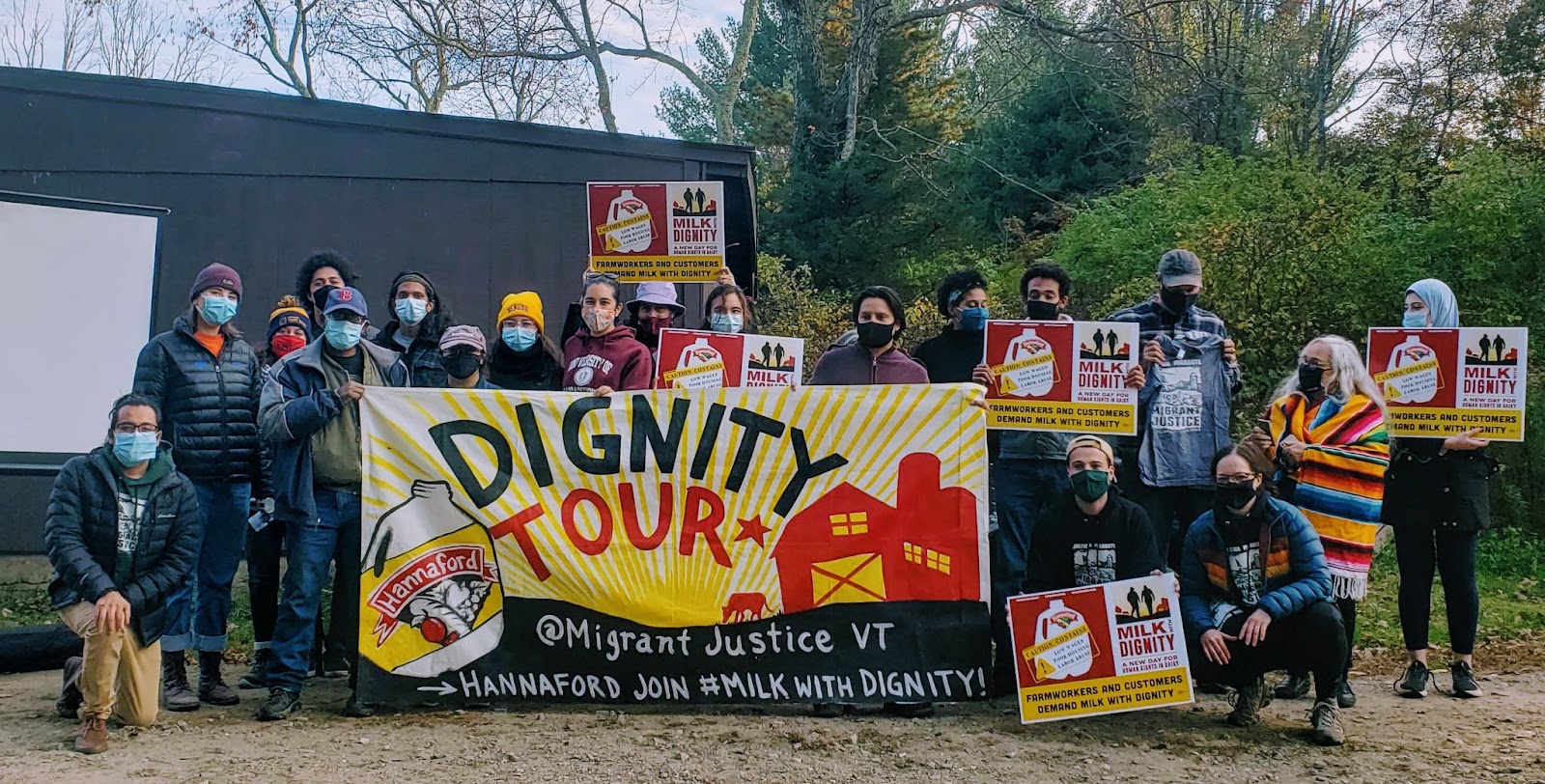 10/24, Grafton, MA: We started back north, stopping at the Global Village Farm to give a presentation hosted by the food justice organization Uprooted and Rising 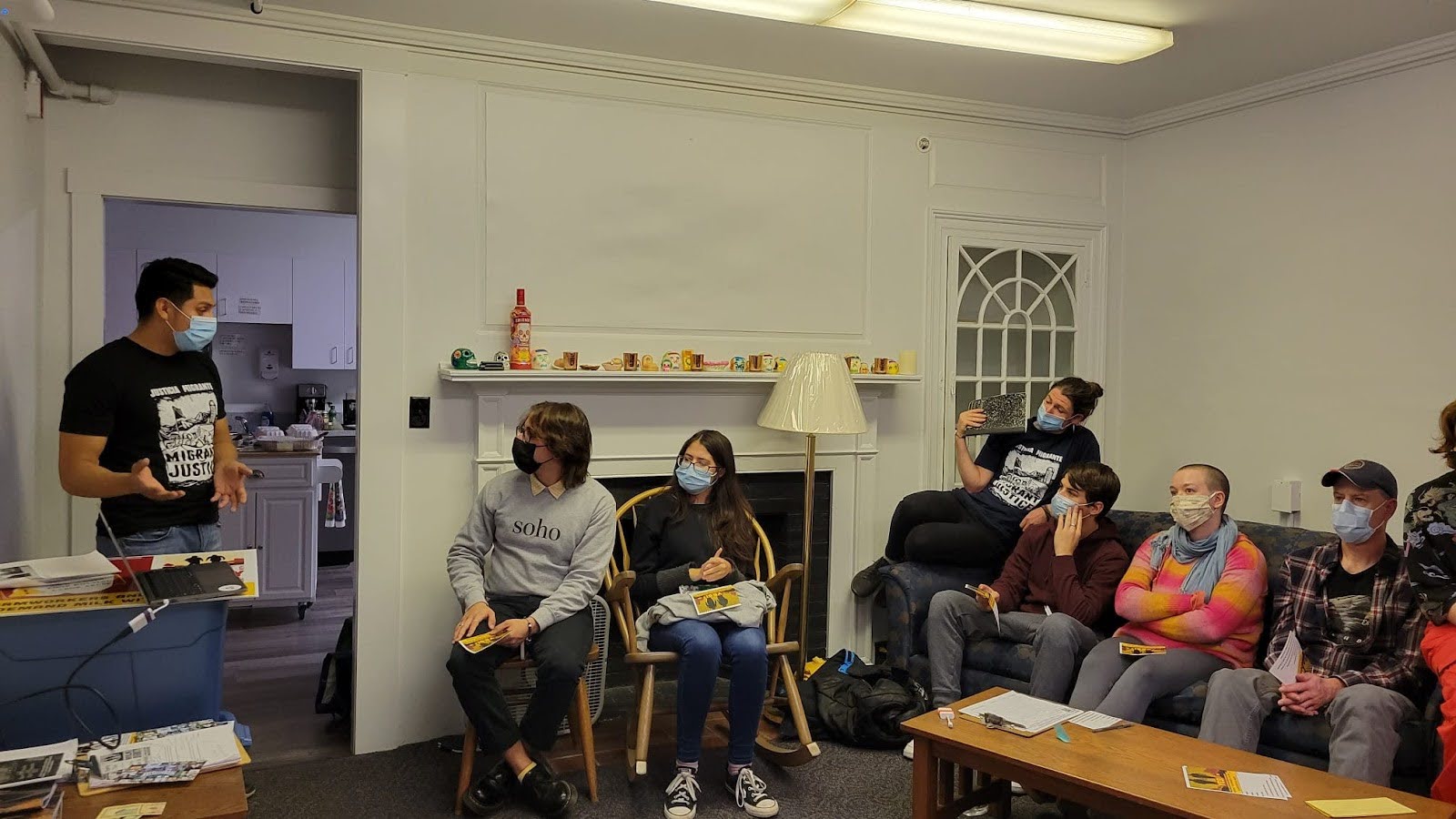 10/24, Hanover, NH: That evening, we made it to Dartmouth College and presented at La Casa, a Spanish-speaking residence on campus. This marked the official end of the tour, but... 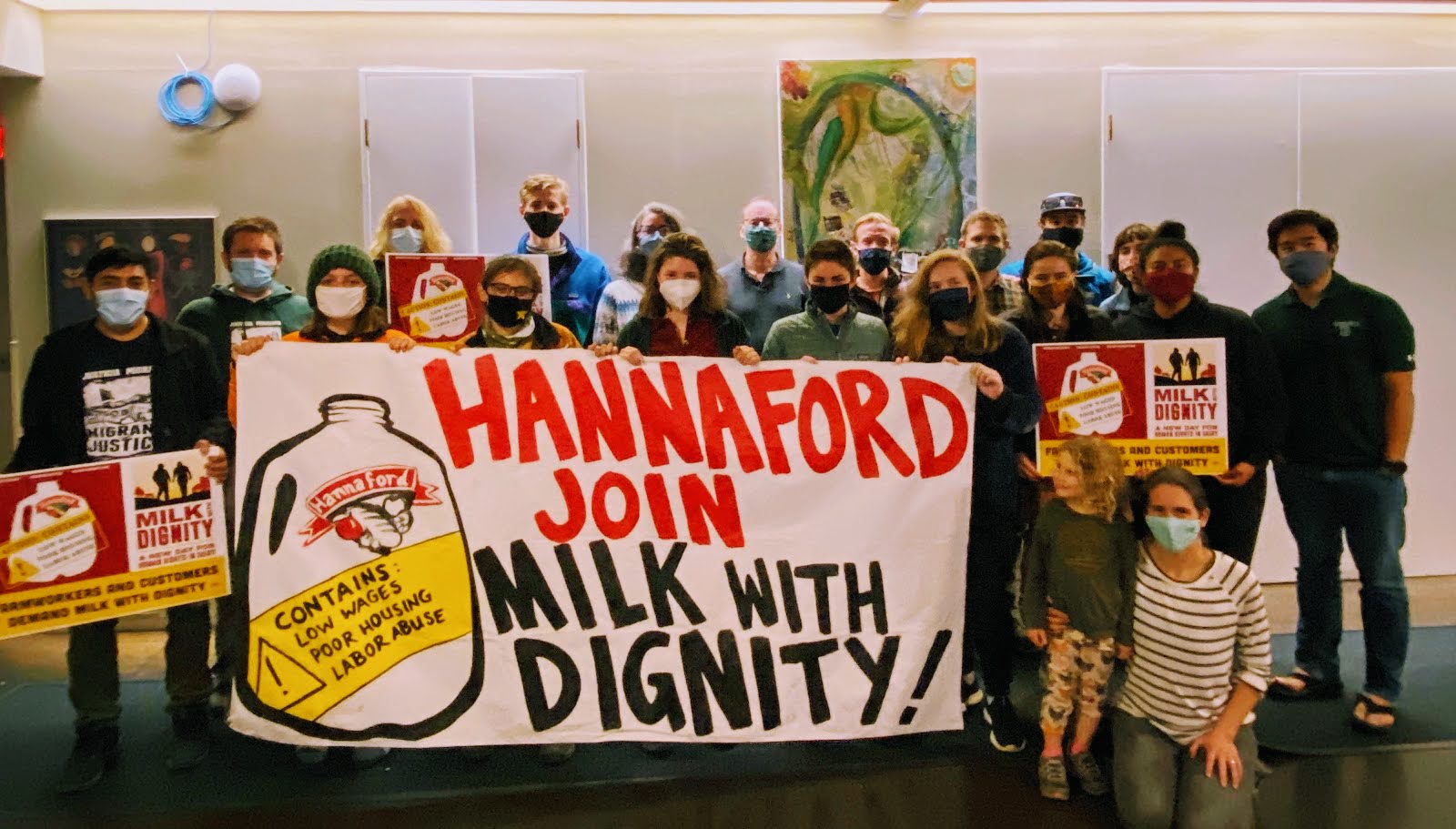 10/28 Burlington, VT: ...we decided to tack on a couple more presentations! We met with more students from Dartmouth who were traveling through Burlington and staying at the Rock Point Conference Center of the Episcopalian Church

10/29, Burlington, VT: And we ended the Dignity Tour (for real this time!) with a presentation at the University of Vermont.