On July 29th, two busloads of farmworkers and allies made the trip from Vermont to Maine, to the site of Hannaford’s corporate headquarters. They were met by dozens more, ready to picket the supermarket chain for its refusal to sit down with farmworkers and take responsibility for the labor abuses on farms producing Hannaford-brand milk.

Dozens of dairy workers ended their overnight milking shifts at the crack of dawn and got ready for the five-hour journey to Maine. Whole families participated; parents picketed with toddlers sitting on their shoulders or pushing infants dozing in strollers. At the end of the action – after marching and chanting for hours under the blazing sun – workers tried to catch some sleep on the bus ride home before heading back into the barn on their return.

Farmworkers and their families led this powerful action because they know that they are engaged in a struggle to win basic human rights. As farmworker-leader Olga Cruz said:

We have come to Maine many times now. It’s a long journey but dairy workers don’t get tired, because we want Milk with Dignity. With the program, I am no longer discriminated against, no longer harassed. I have a right to be with my daughter and my family. I have a right to sick leave and to receive visitors. I have all the rights that a human being should have. I am here today because I want all workers to have those same rights and protections. Workers and consumers are united in calling on Hannaford President Mike Vail to join Milk with Dignity and respect our human rights.

Check out the photo-report below!

Farmworkers and allies loaded off the buses from Vermont and were met by dozens more, including dairy workers from farms in Maine. The night before, workers had gathered alongside supporters on a farm in central Maine to paint picket signs for the next day’s action. 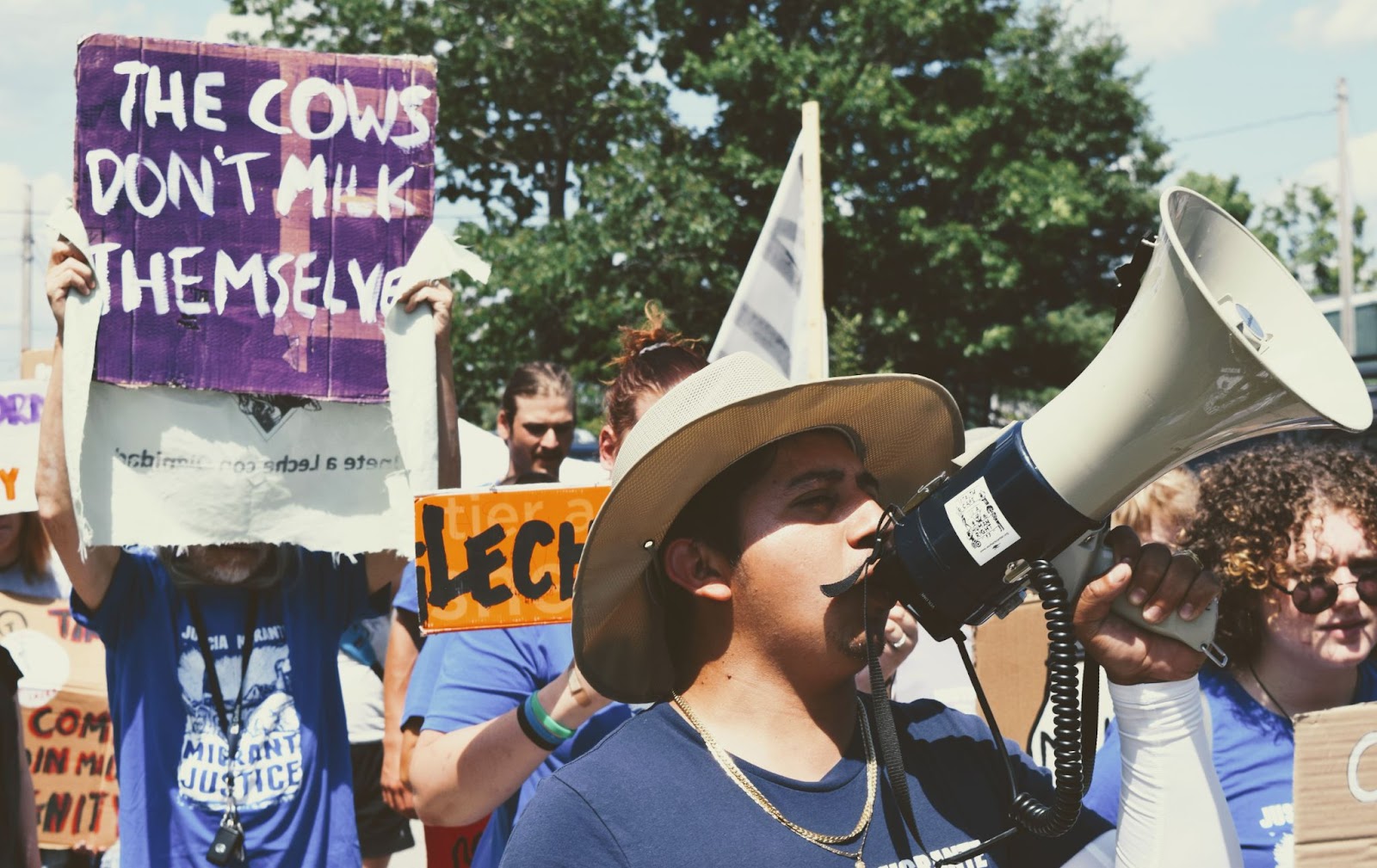 The chants started up right away: “Get up, get down, Milk with Dignity is coming to town!” 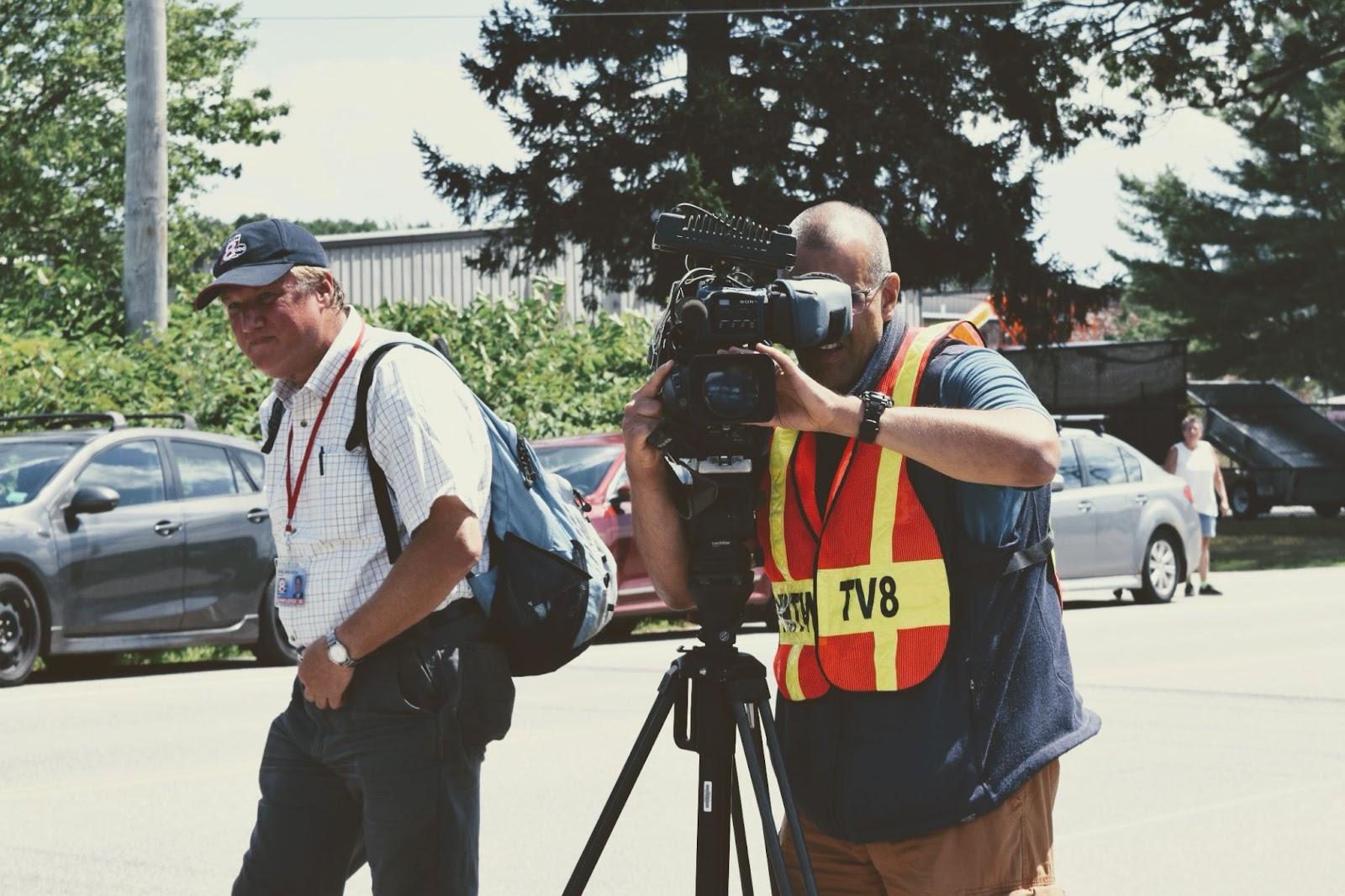 The press was waiting for us on arrival. The headquarters picket was covered by TV and radio news across the state. 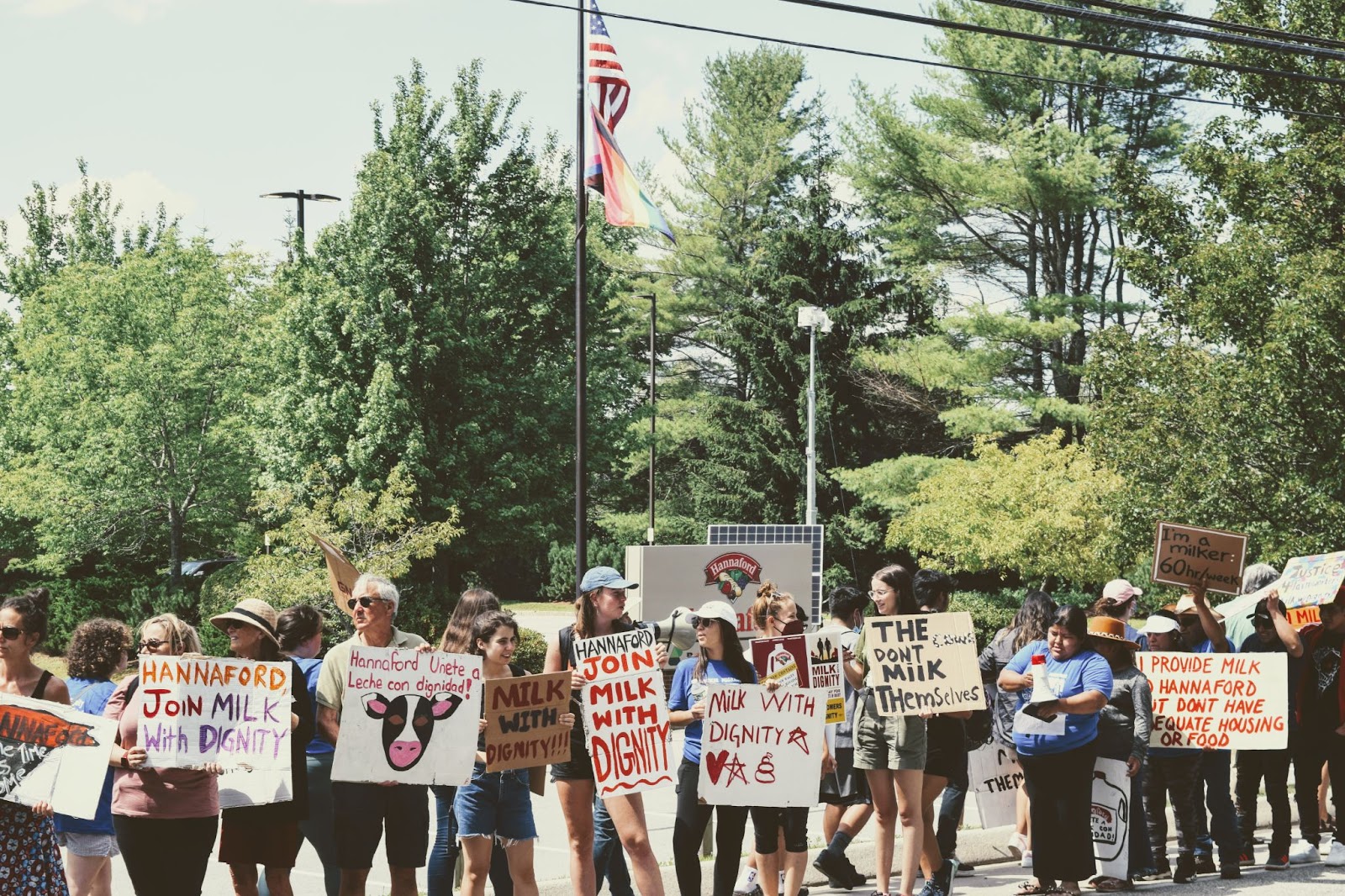 Picketers spread out in front of the corporate headquarters, presenting homemade signs to the cars driving by 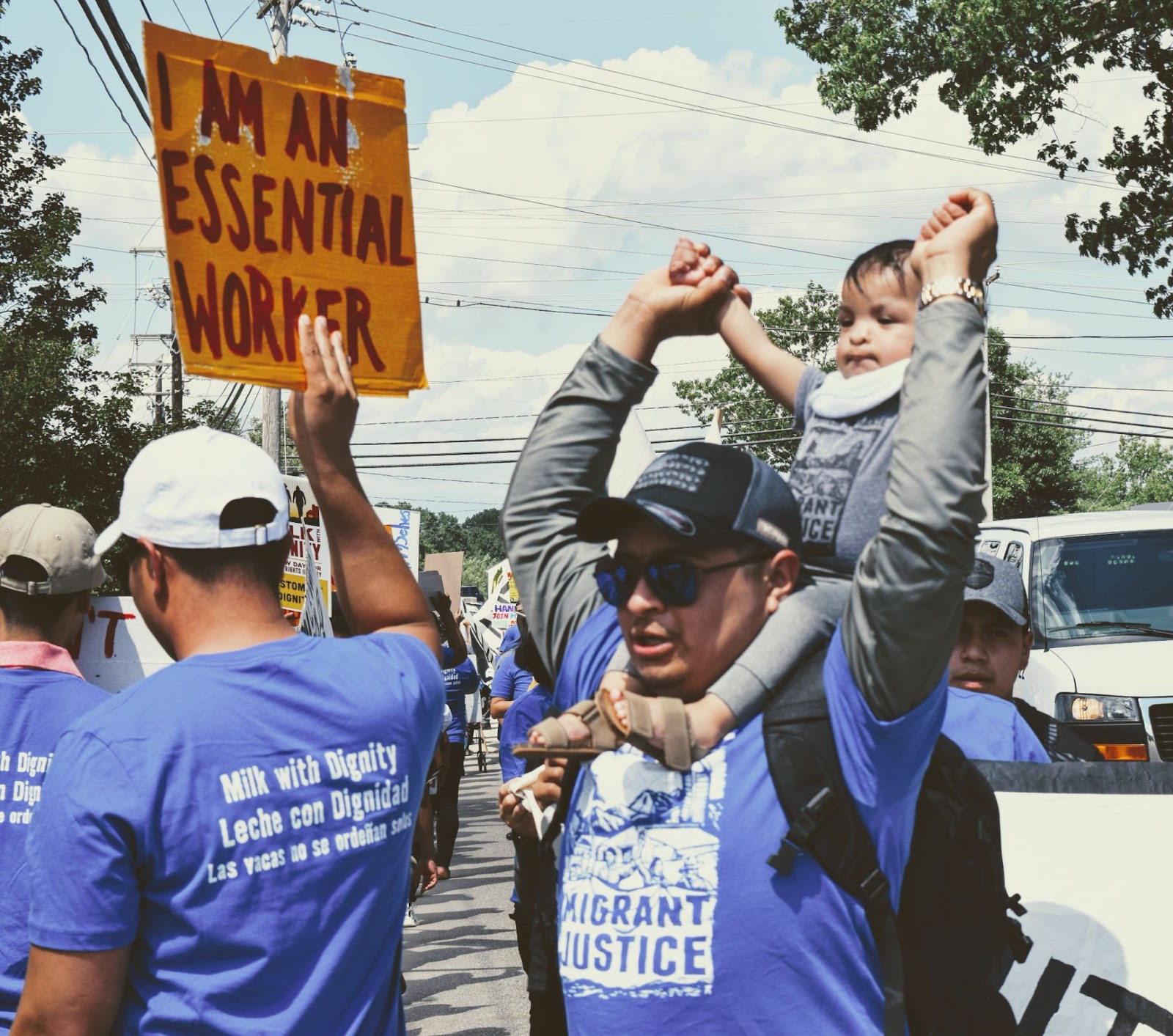 The event was a family affair, with workers accompanied by their entire families – even the youngest members! 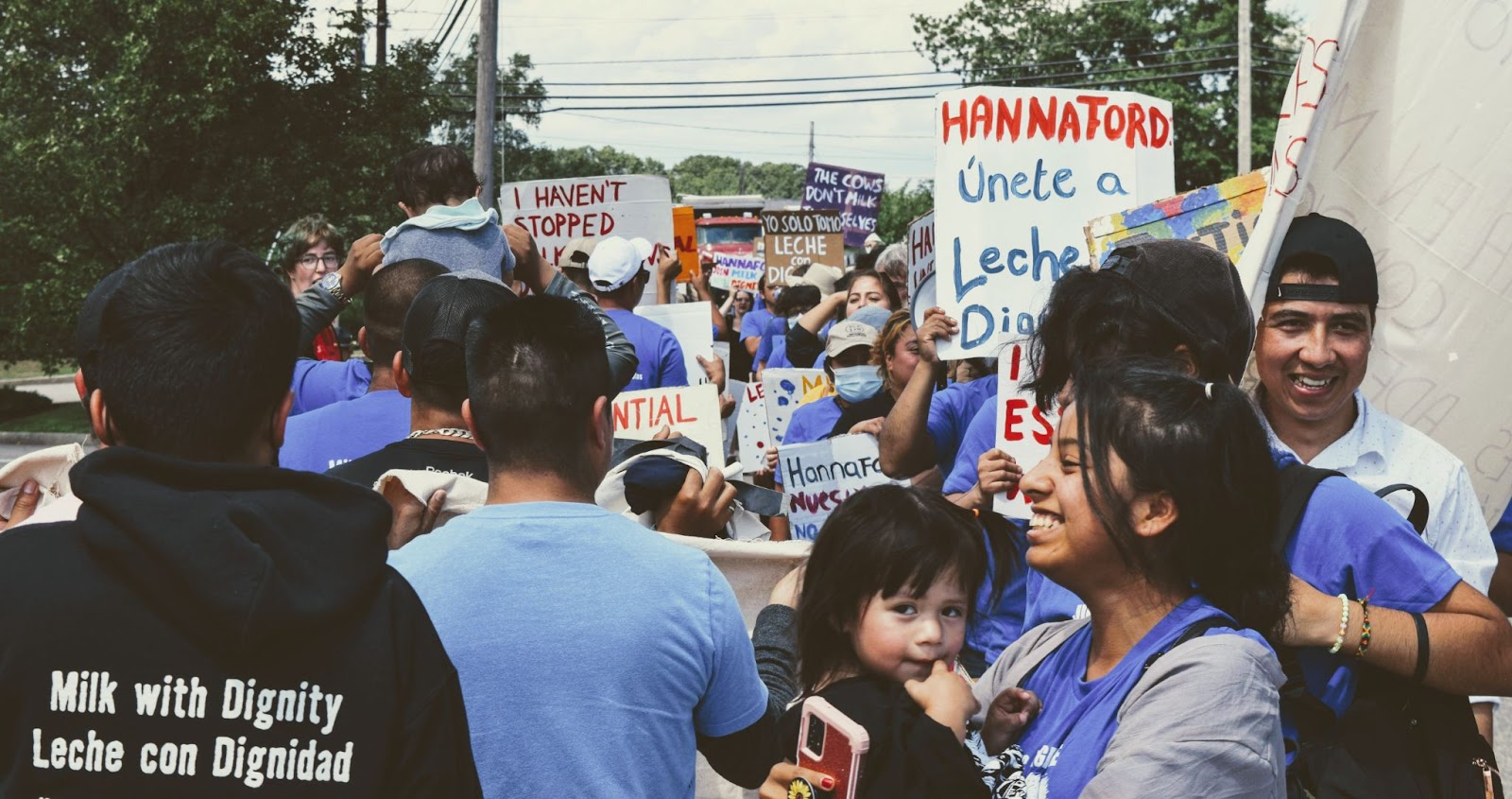 Despite the hot sun and lack of shade, picketers kept their spirits up and their chants loud 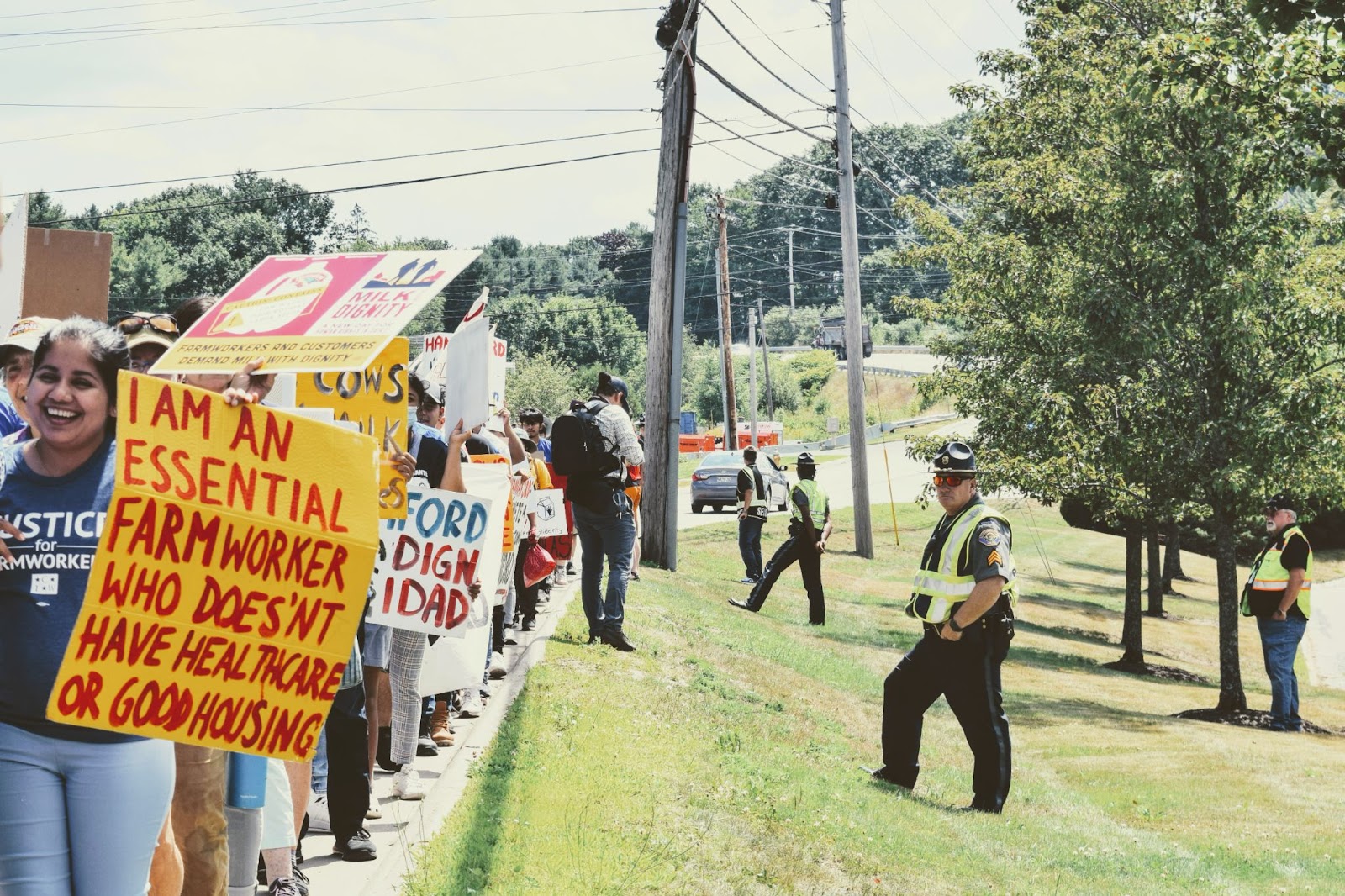 Farmworkers were met with a formation of police and security guards surrounding the headquarters. Just as in past actions, Hannaford would rather pay guards to try to keep workers quiet than pay to protect those workers’ rights. 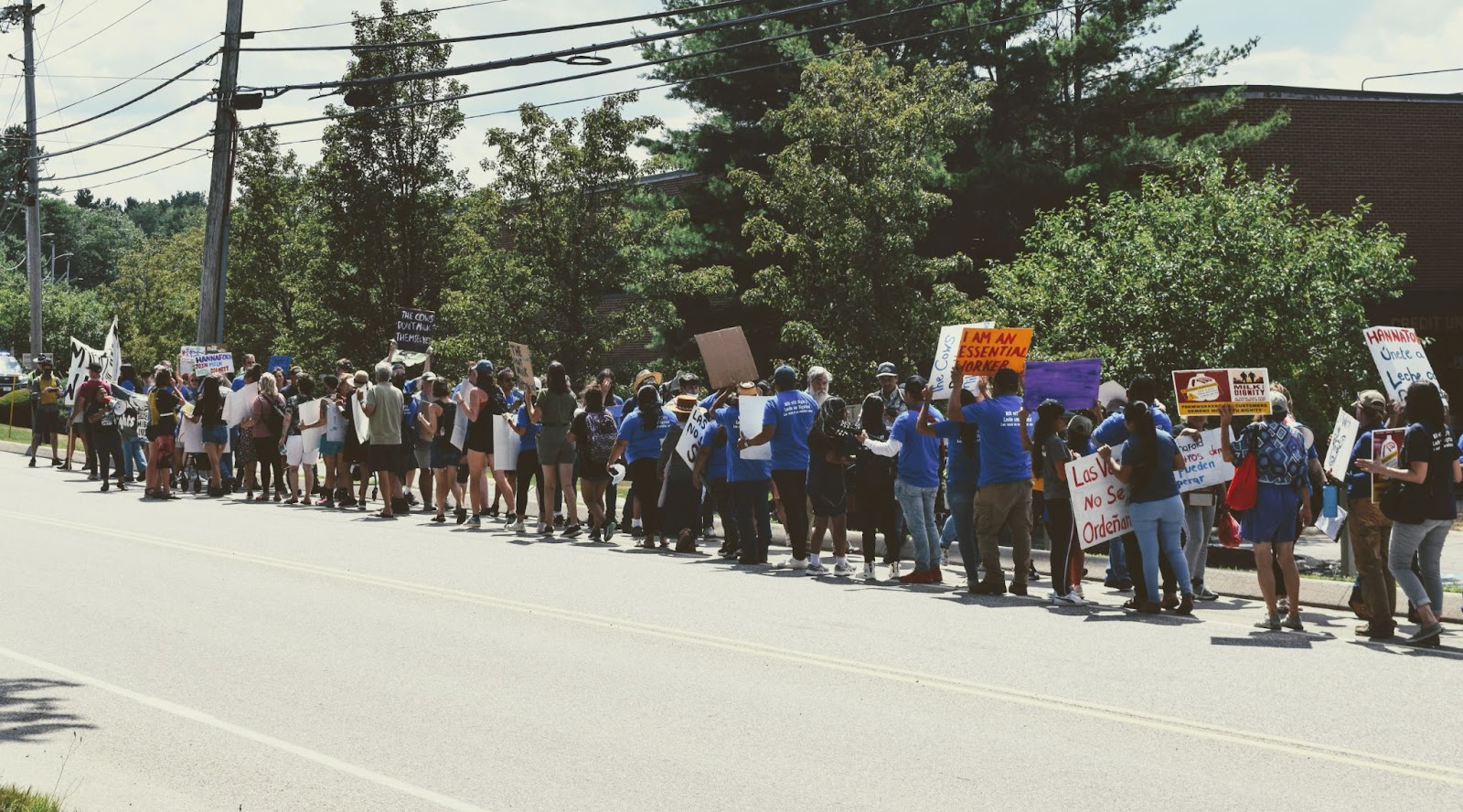 The police and guards kept picketers off the grass surrounding Hannaford’s headquarters. Undeterred, we picketed in the street! 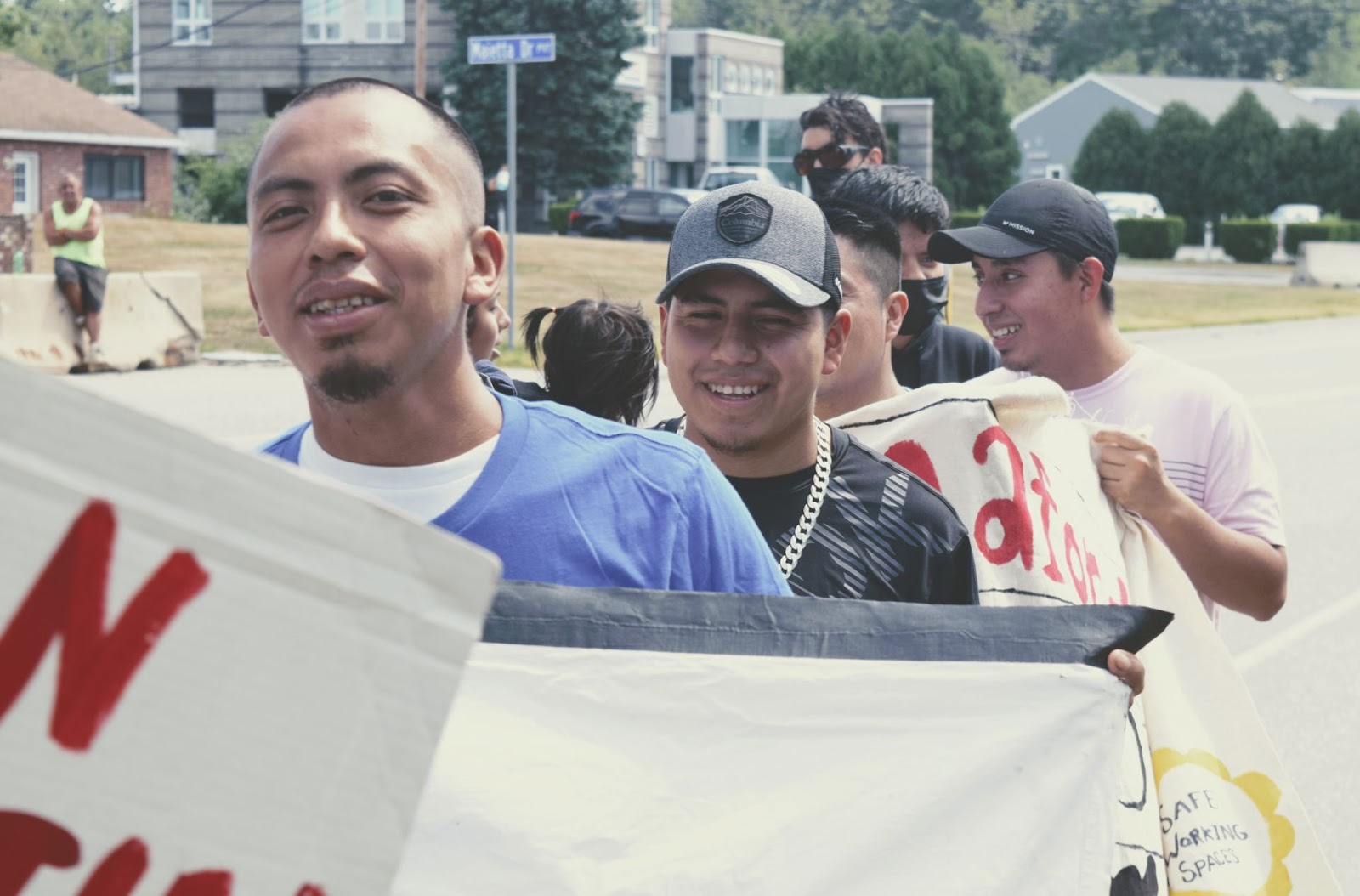 Some farmworkers had participated in Milk with Dignity actions before, but for many, this was their first time joining with their community to take action for human rights. 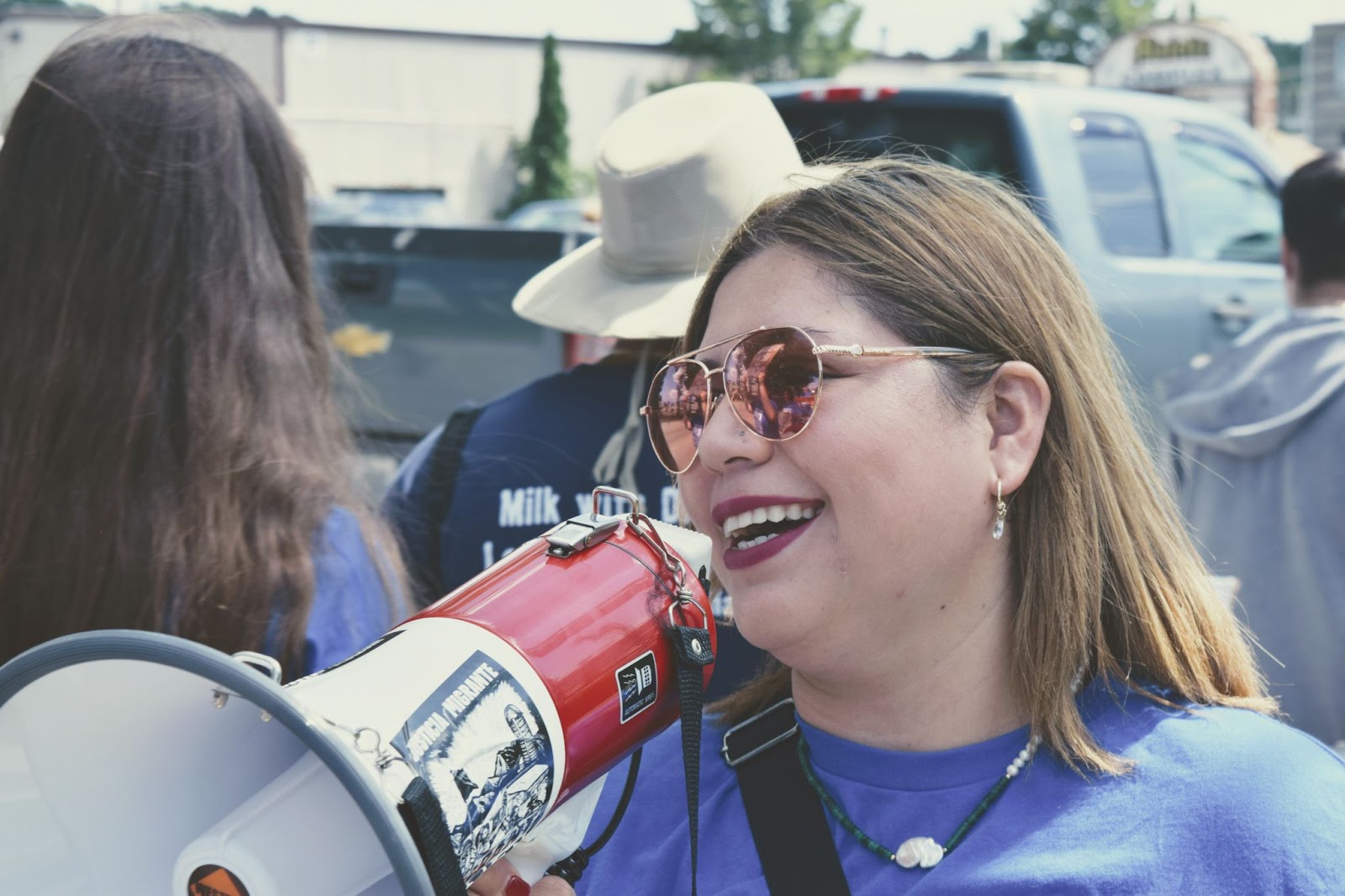 “What do we want? Milk with Dignity! When do we want it? Now!” 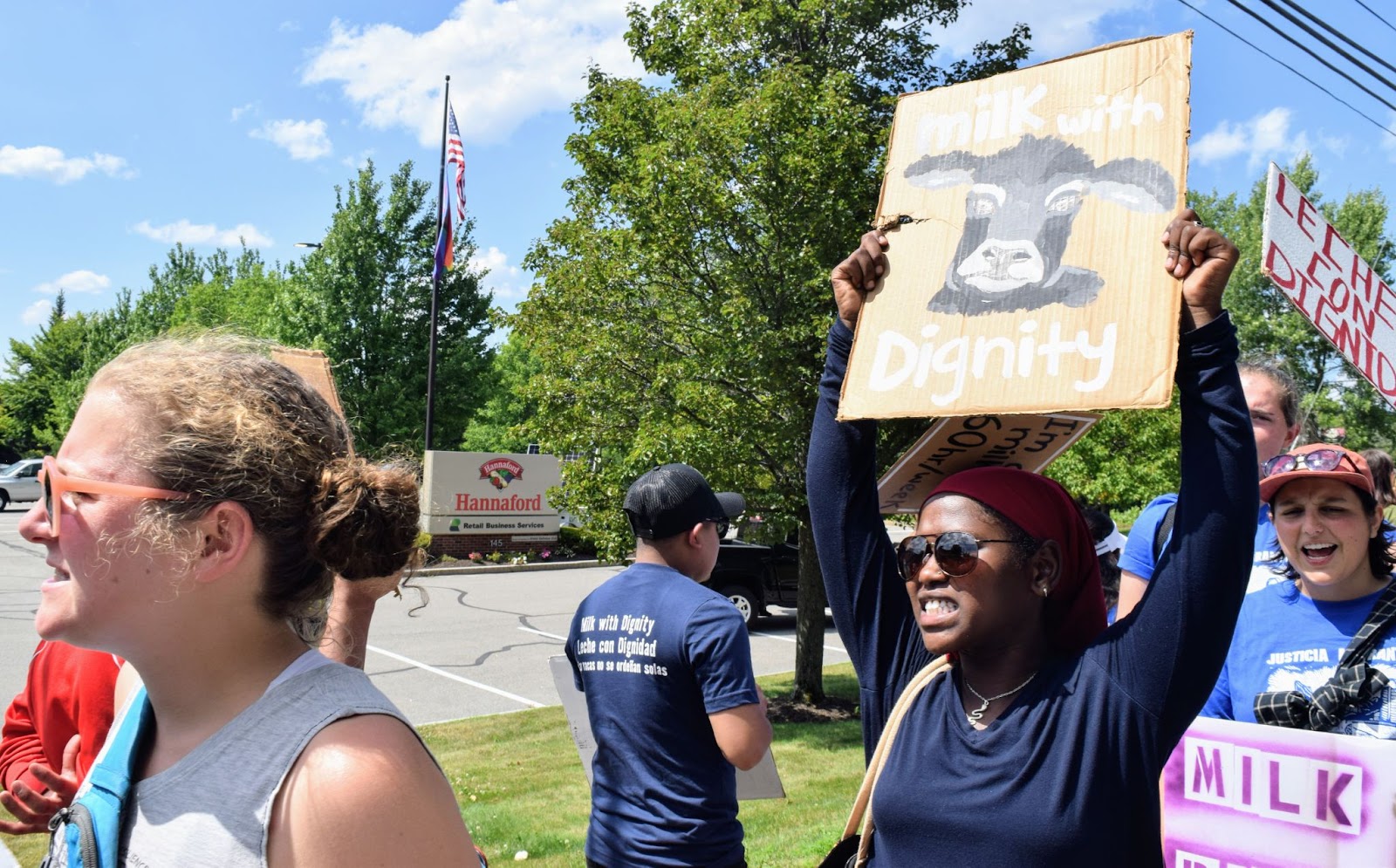 “The people, united, will never be defeated!” 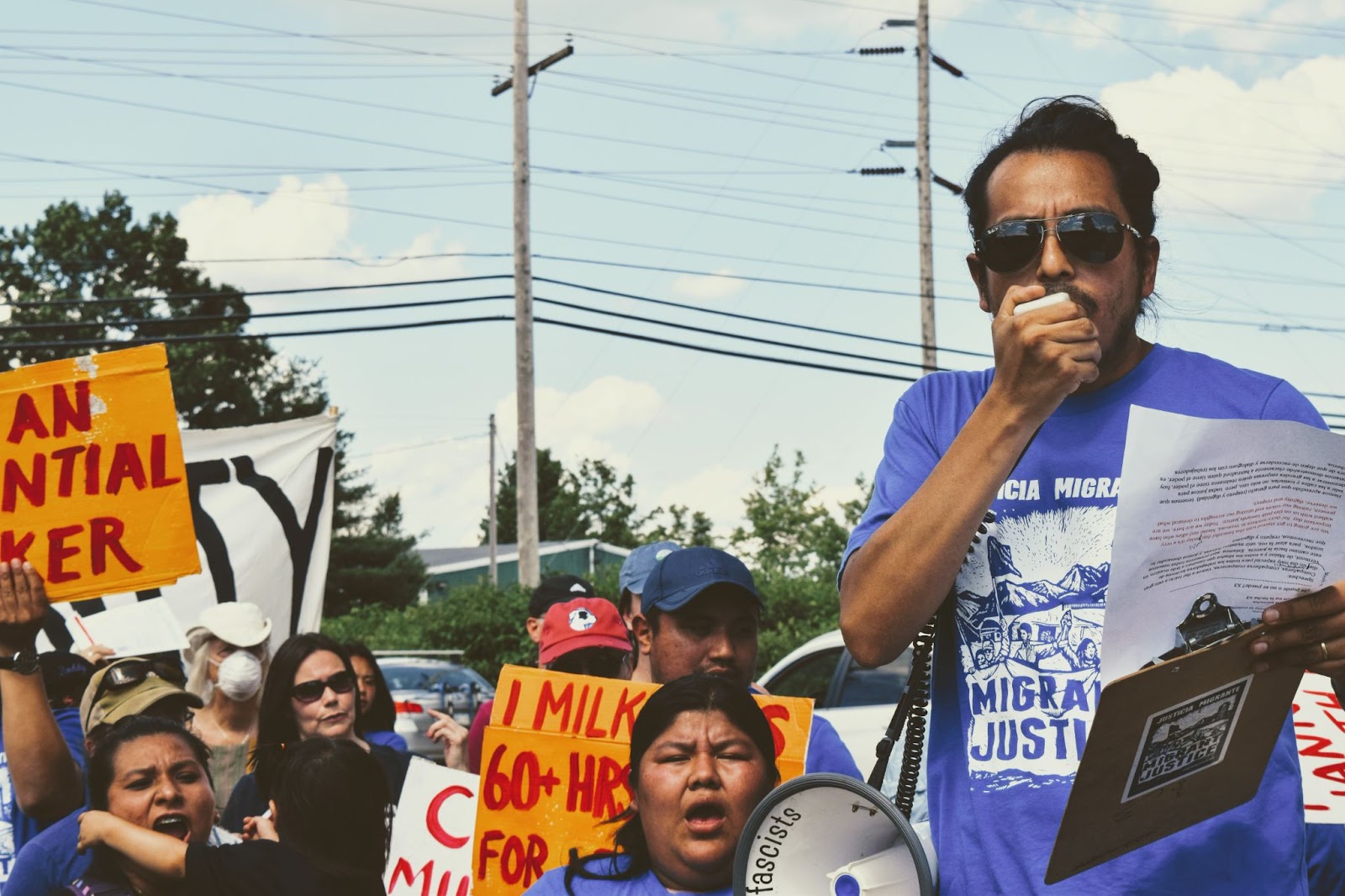 Abel from Migrant Justice kicked off a rousing speaking program: “If we want to get our dignity and respect, we cannot sit back and wait. We have to go to the streets! Not just one person, not two people, not three people. All of us! We need to show corporations who has the power!” 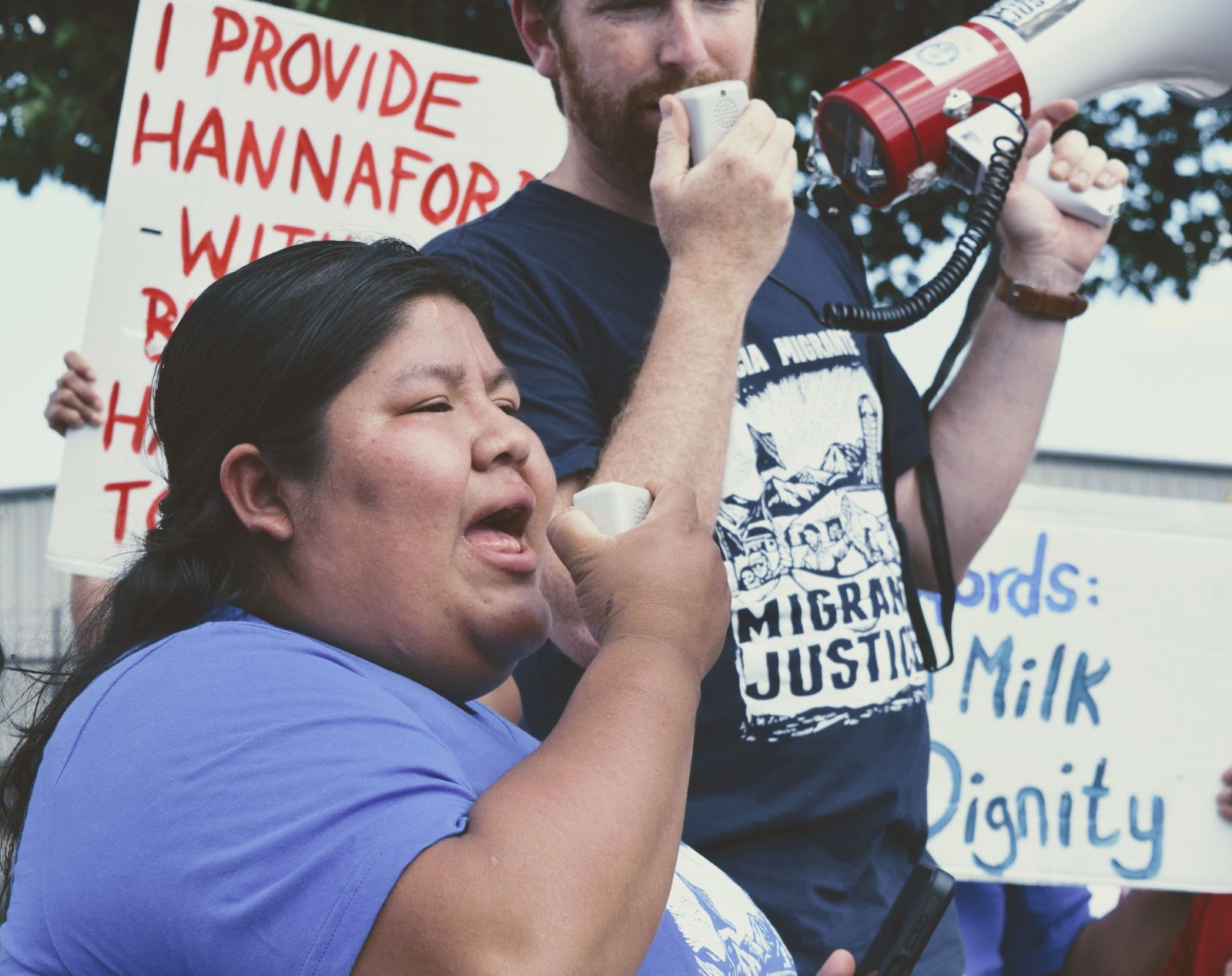 Olga Cruz followed: “To me, Milk with Dignity means that when I apply to work on a farm, the boss won’t laugh in my face. It means my work as a woman will be valued the same as anyone else.” 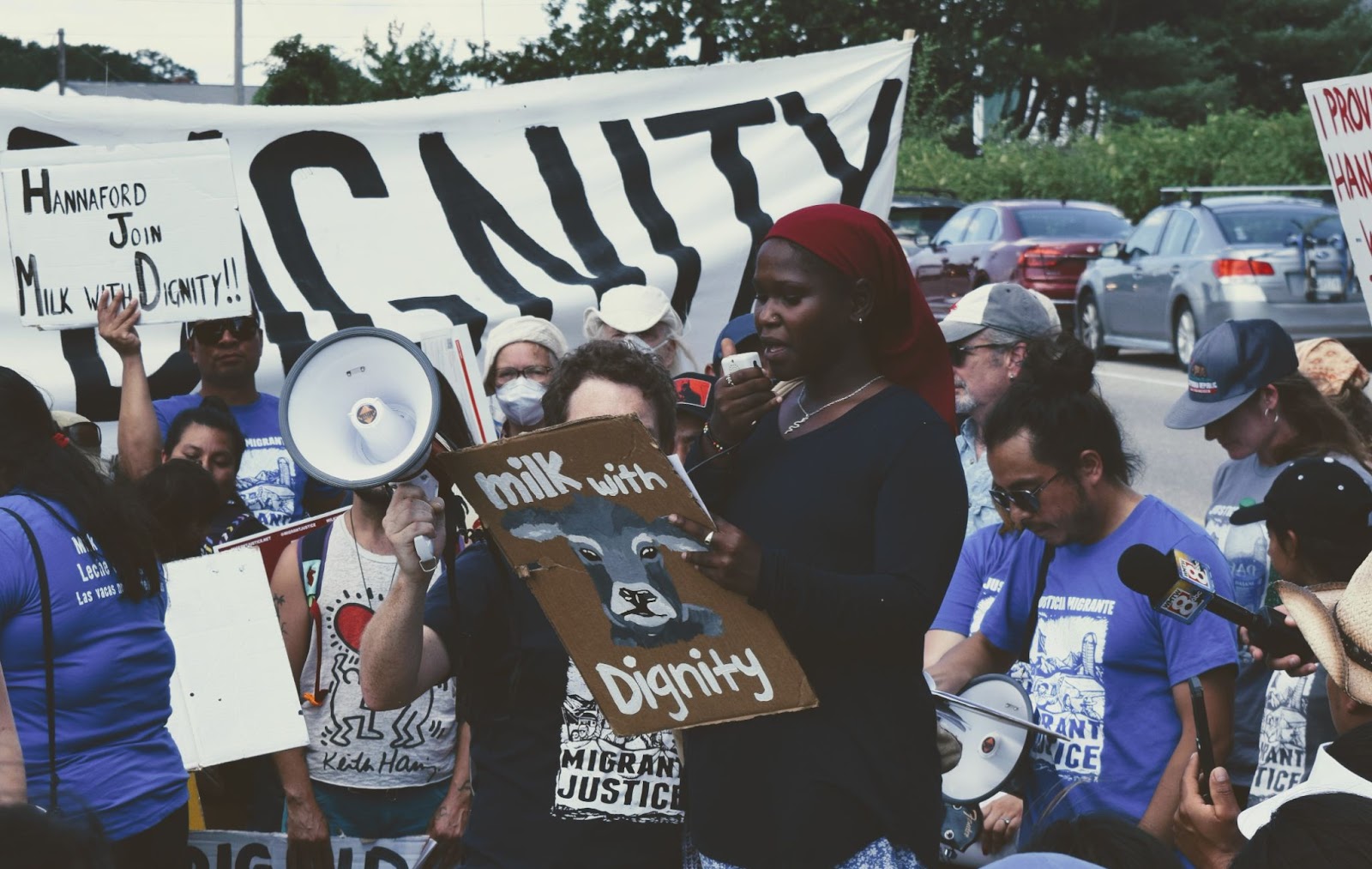 Shukri from Maine Youth Power addressed the crowd: “We are here today as young people in solidarity with farmworkers, and because Hannaford has continually disregarded their human rights. We are here to hold Hannaford accountable for as long as it takes. Young people stand with you and we will not stop until Hannaford signs Milk with Dignity!” 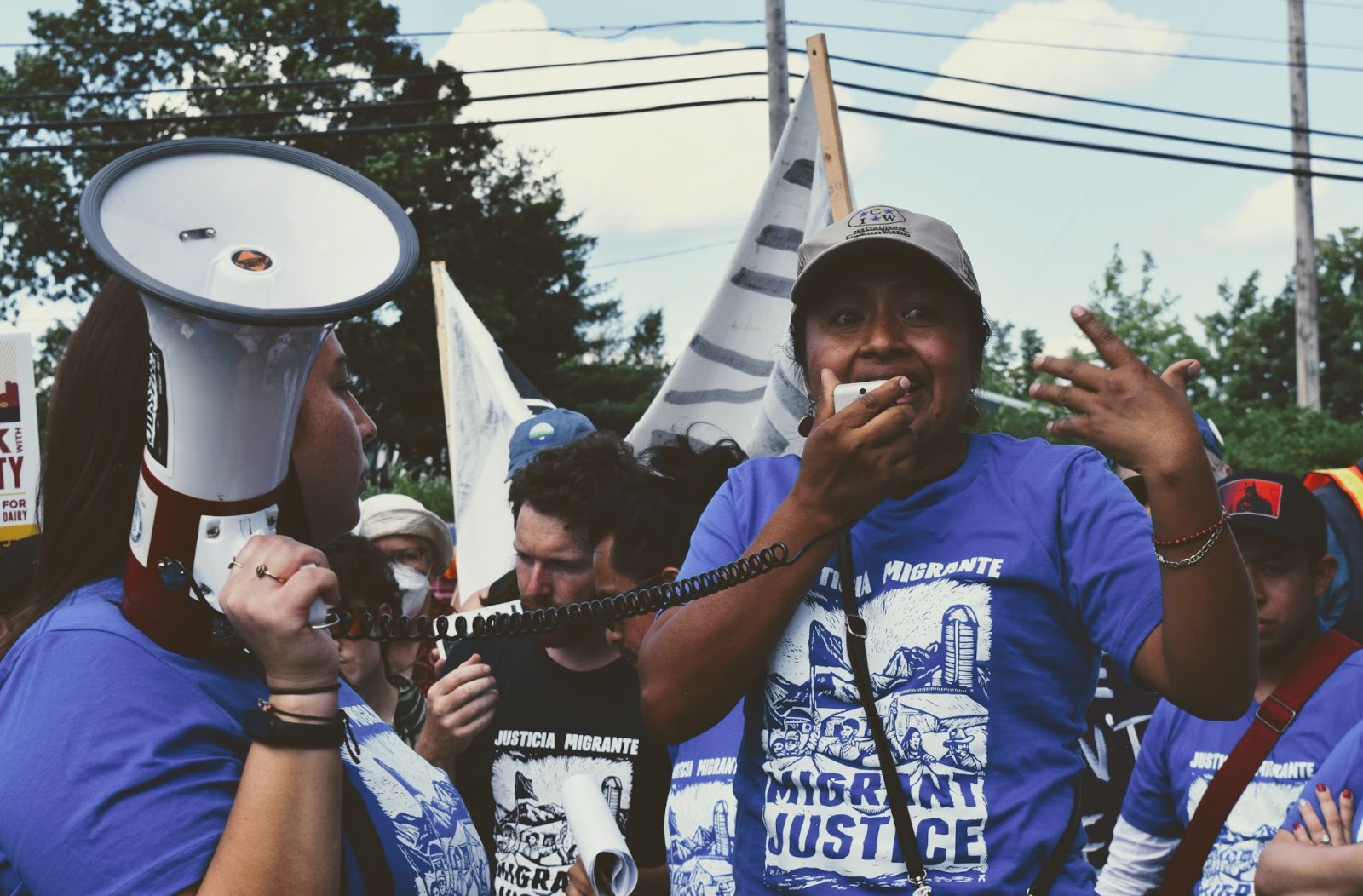 Julia de la Cruz from the Coalition of Immokalee Workers spoke next. Julia was part of a delegation of nine CIW members who traveled from Florida to join the action. The CIW’s Fair Food Program is the pioneering worker-driven social responsibility program in U.S. agriculture and was the inspiration for Milk with Dignity. Learn more at fairfoodprogram.org. 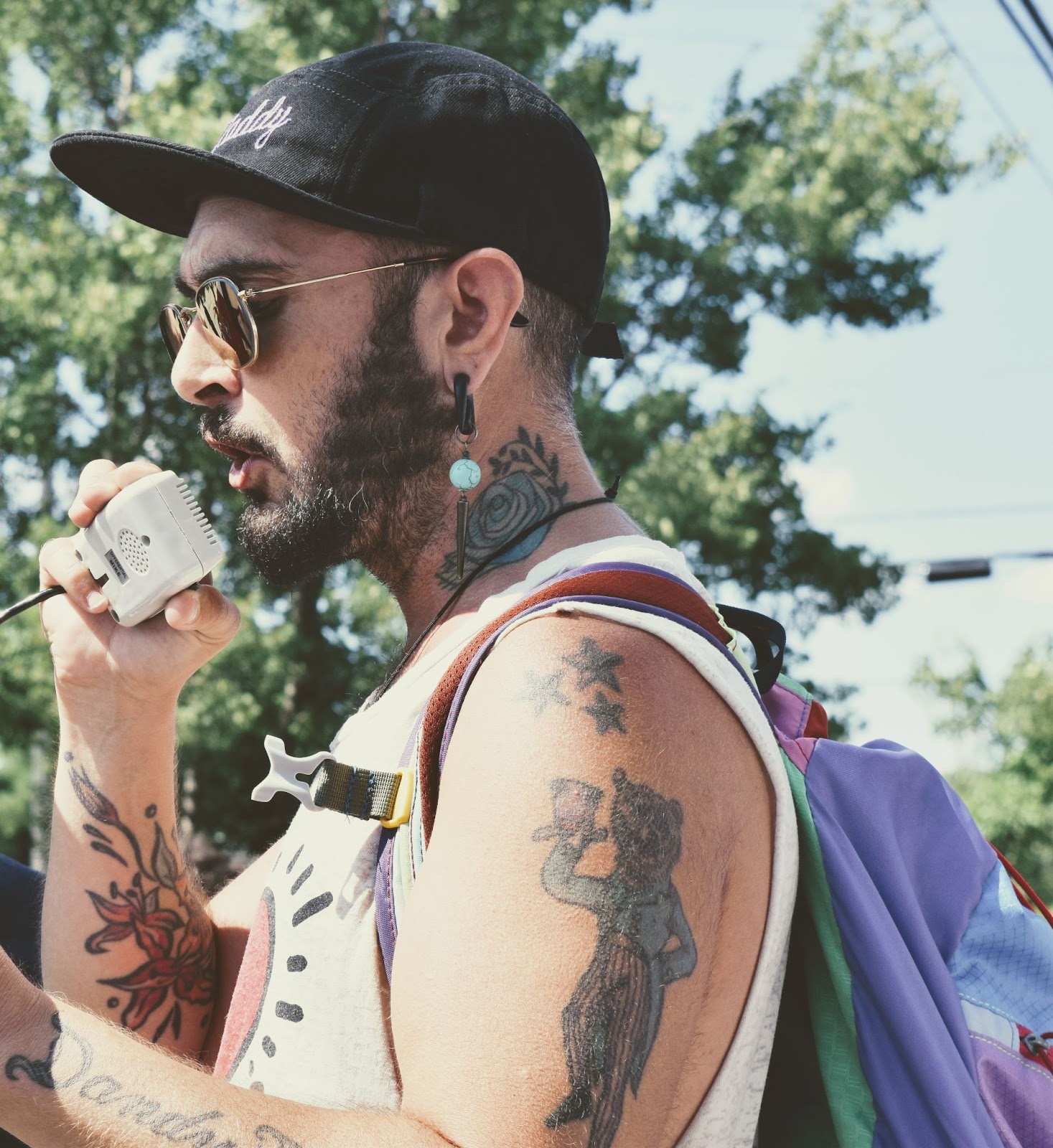 The final speaker of the day was Kell from the Pride Center of Vermont. The Pride Center has been a stalwart ally to Migrant Justice and the Milk with Dignity campaign. 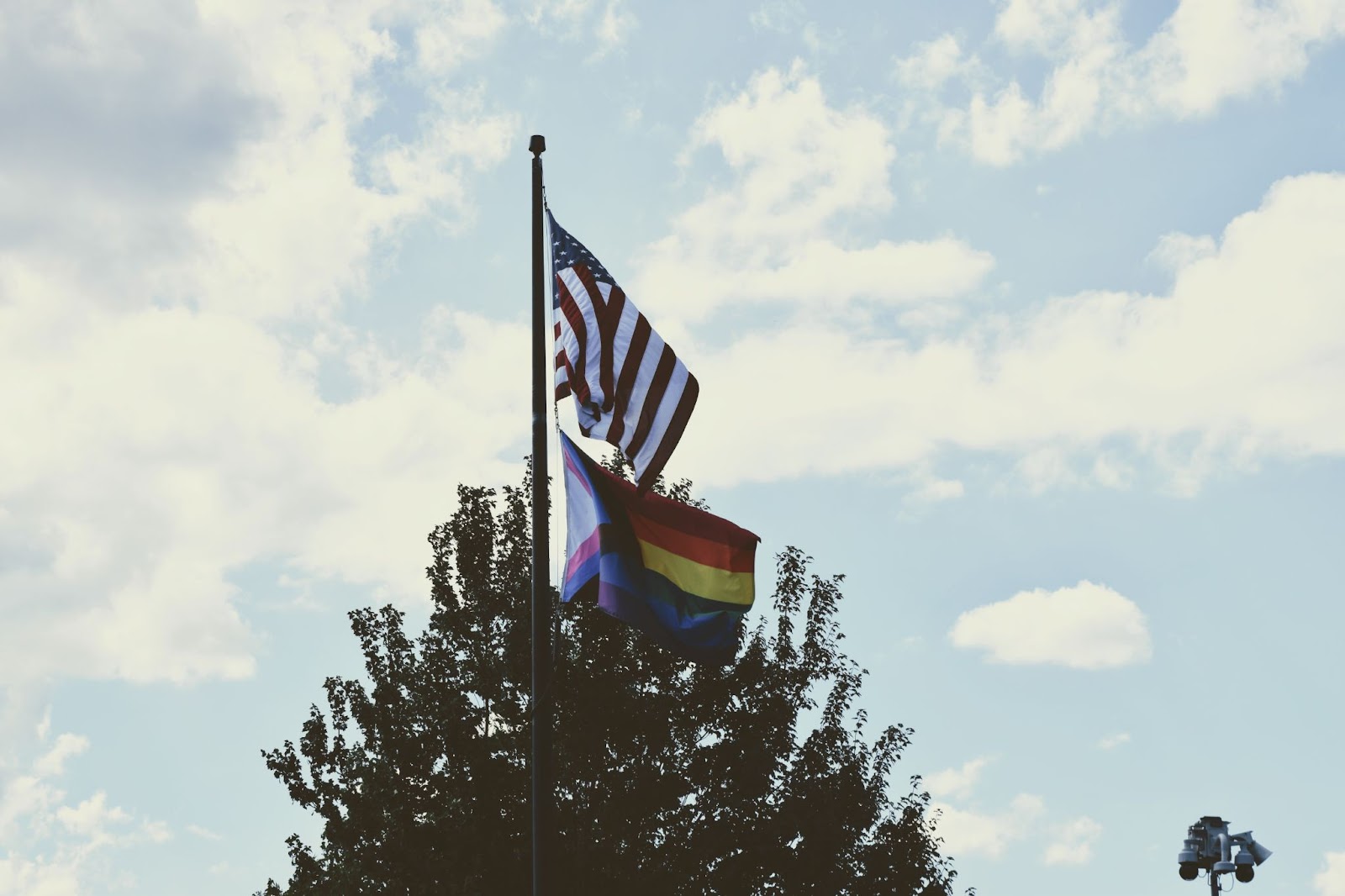 The biggest applause line of the entire action came when Kell pointed to the flagpole in front of the headquarters building. “I see your progress flag. You can’t fly that flag if you’re taking out any of those colors!” 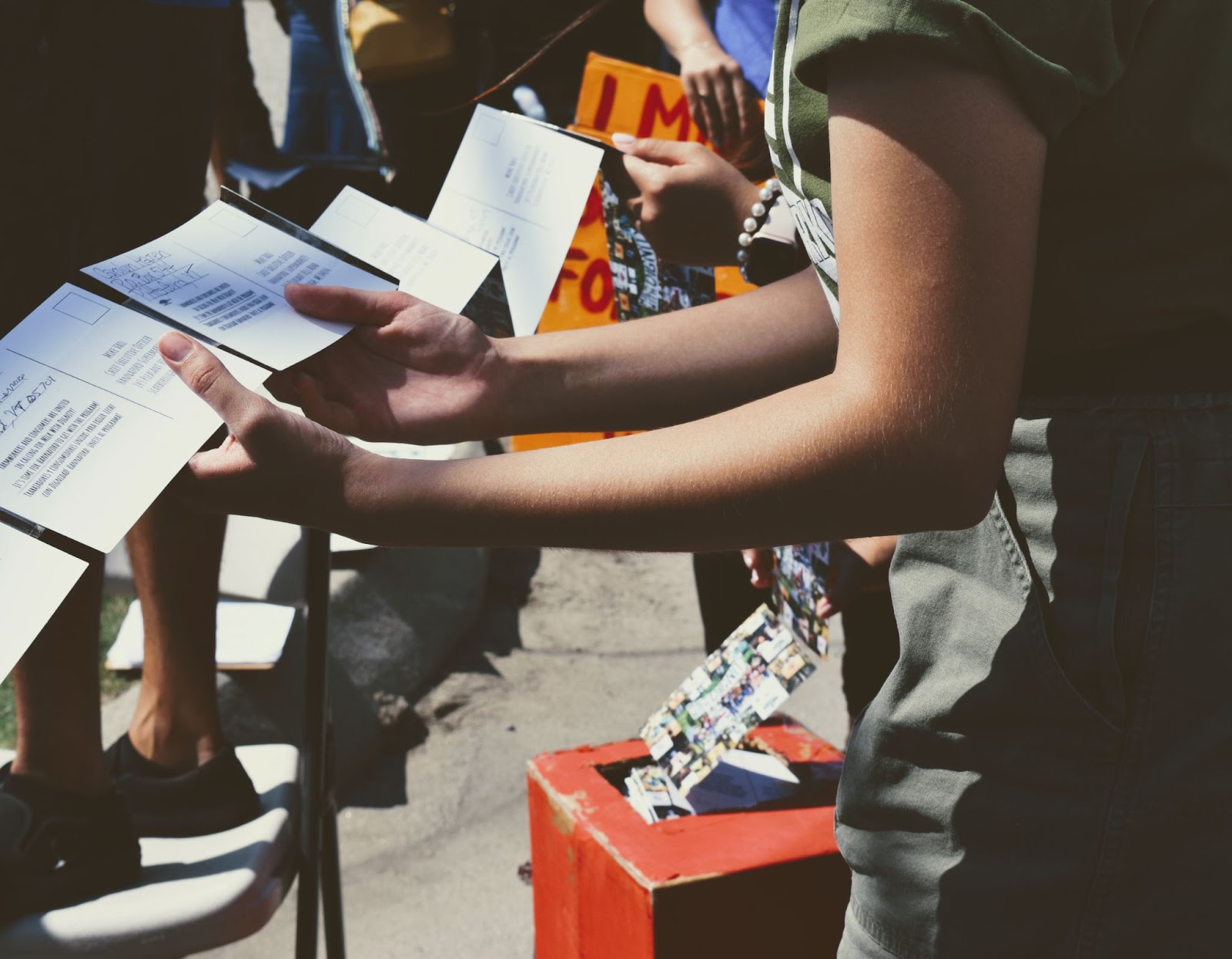 Following the speeches, picketers unfolded a chain of over 1,400 postcards, signed by Hannaford customers calling and addressed to Hannaford President Mike Vail. 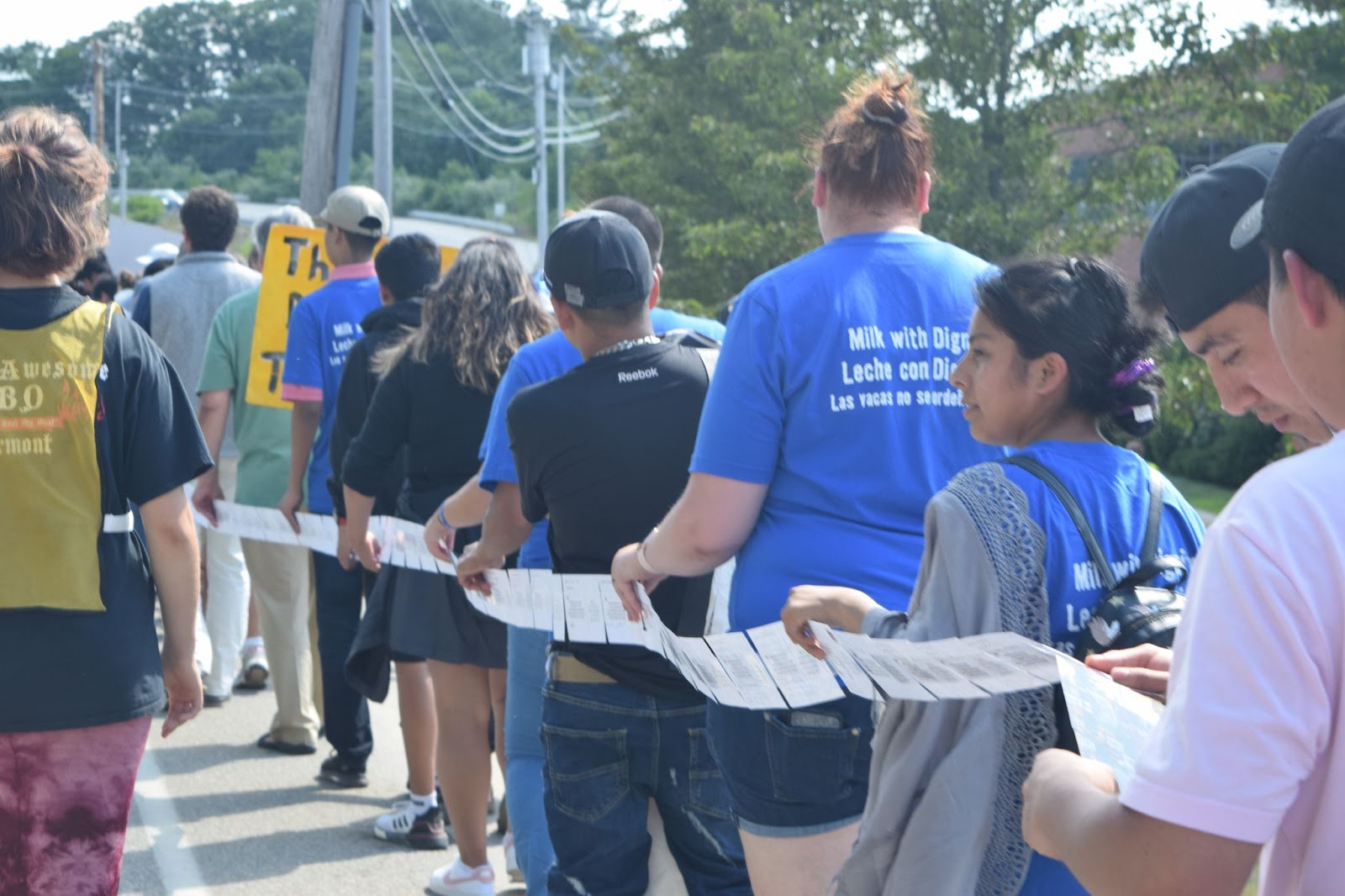 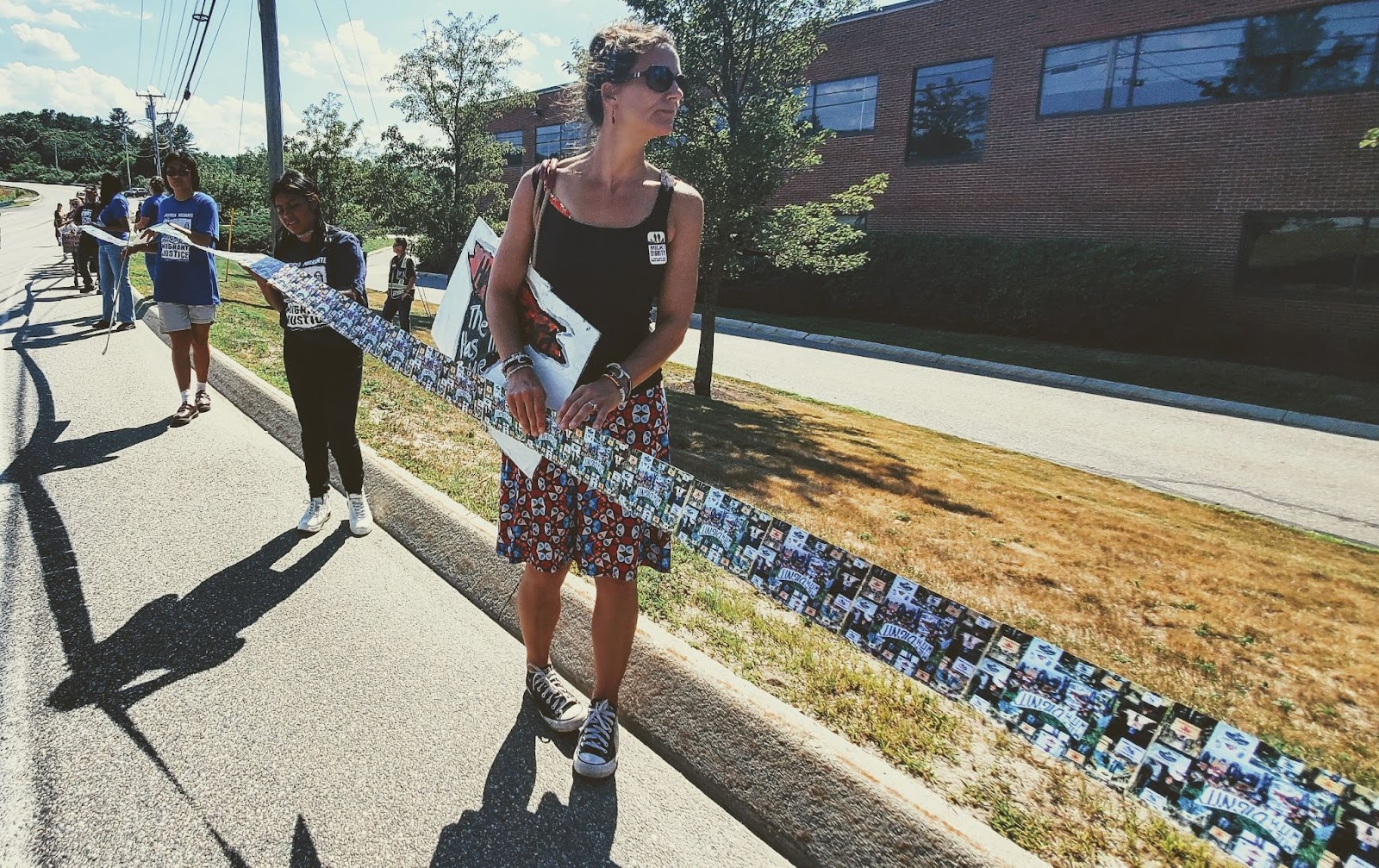 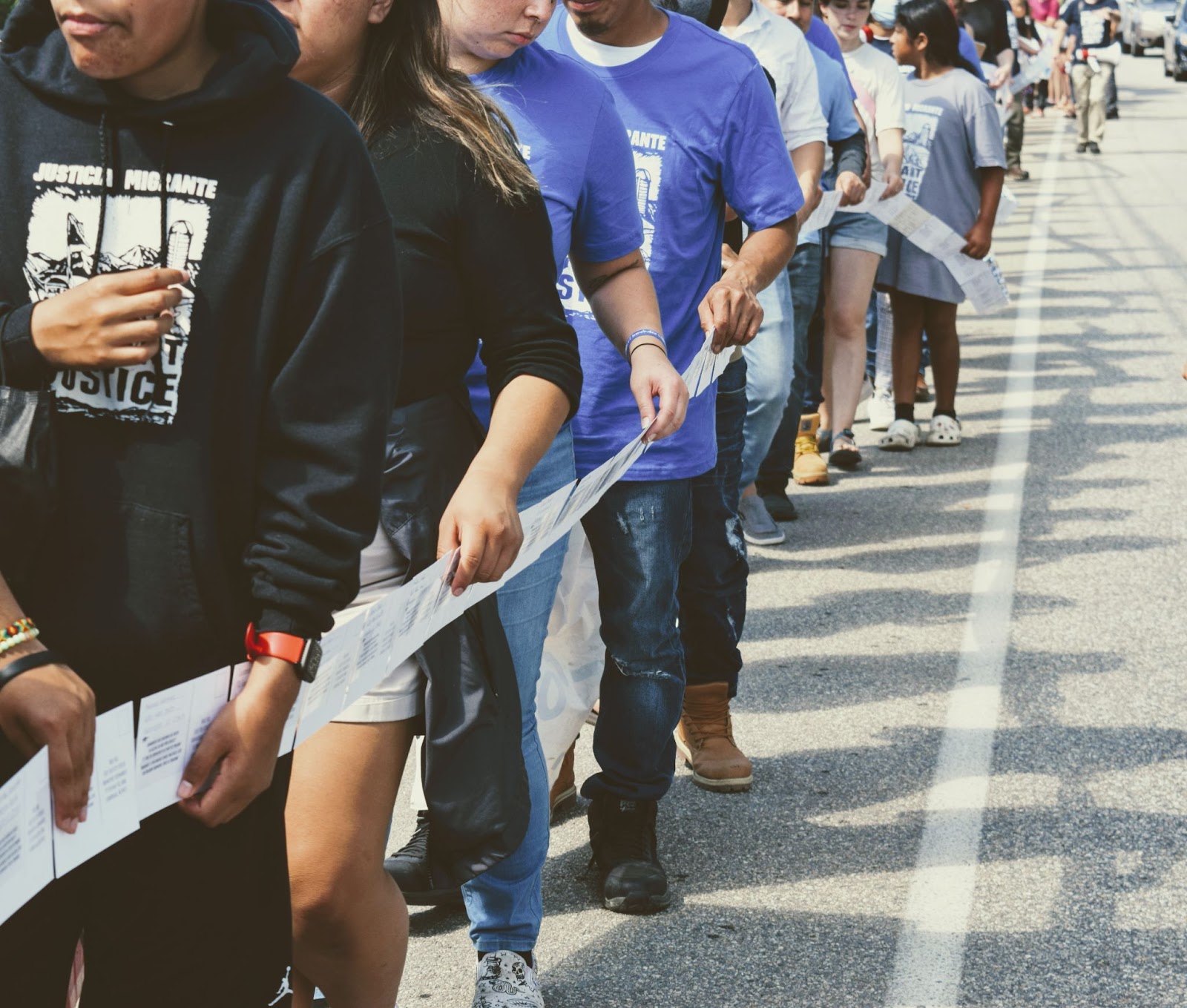 … and going, until it extended all the way around the front of the building – over 100 yards long! 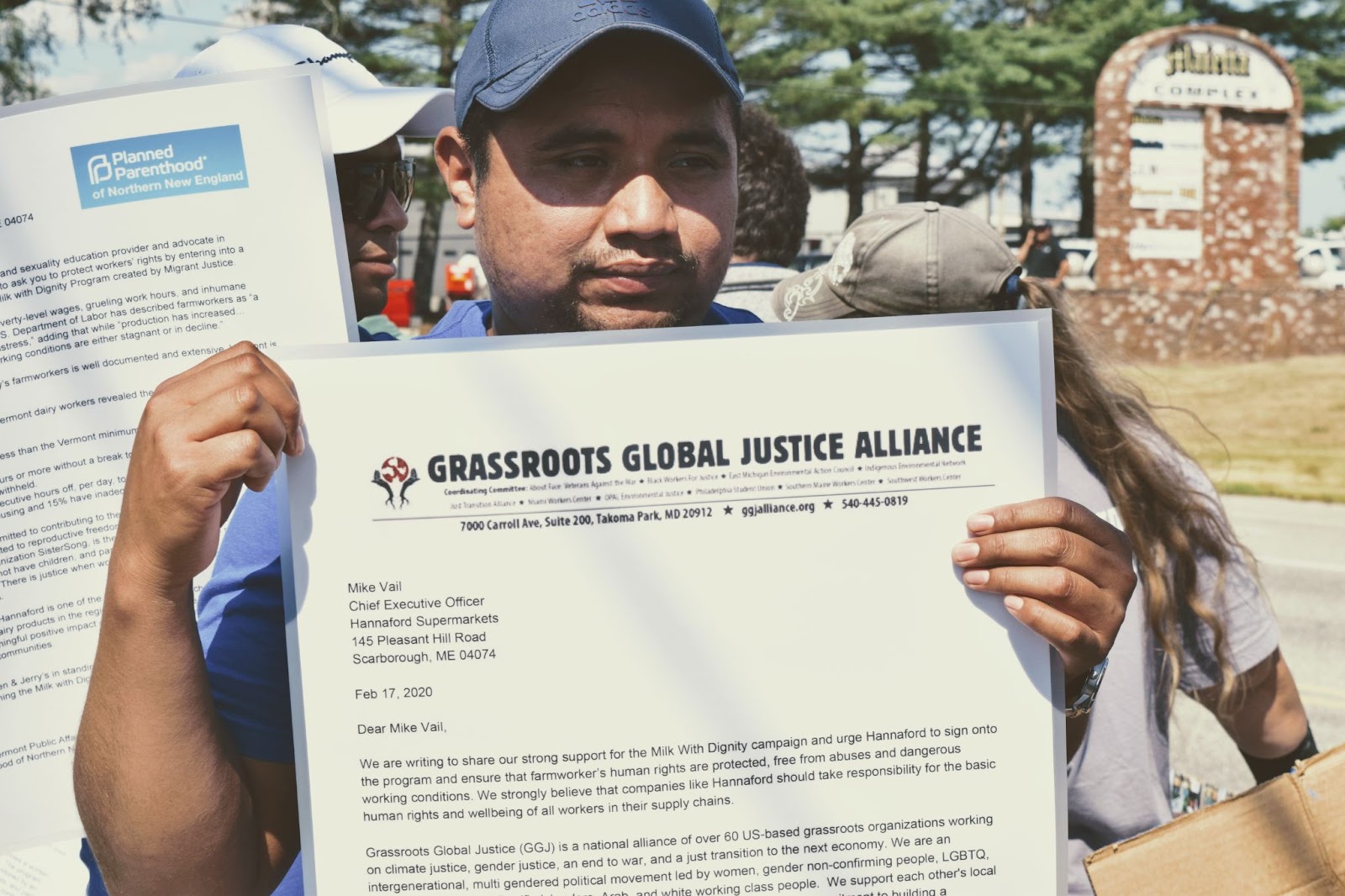 Workers then presented blown-up support letters that ally organizations have sent to Hannaford over the course of the campaign. The letters included large coalitions like the Grassroots Global Justice Alliance… 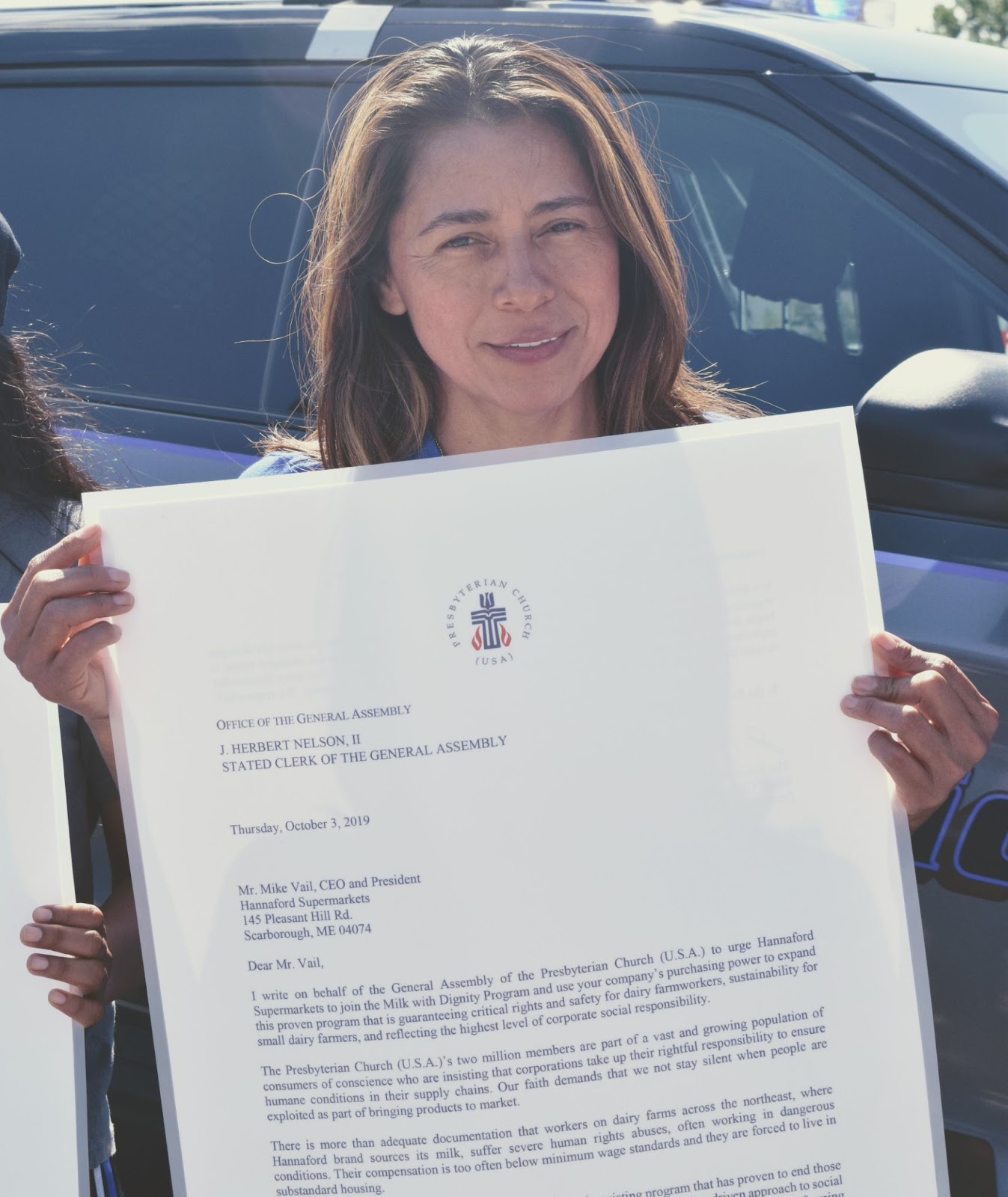 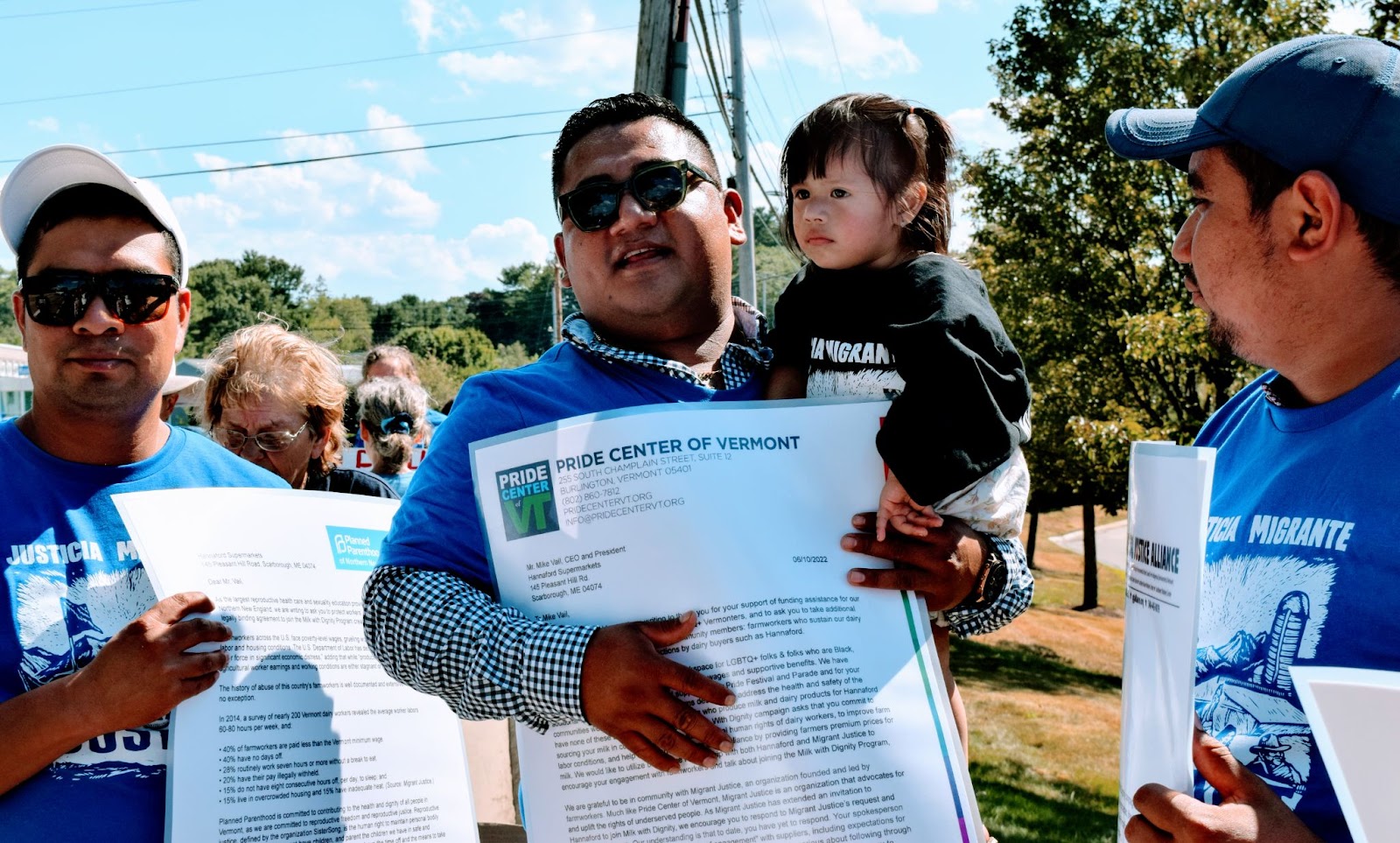 …and local community organizations like the Pride Center of Vermont. 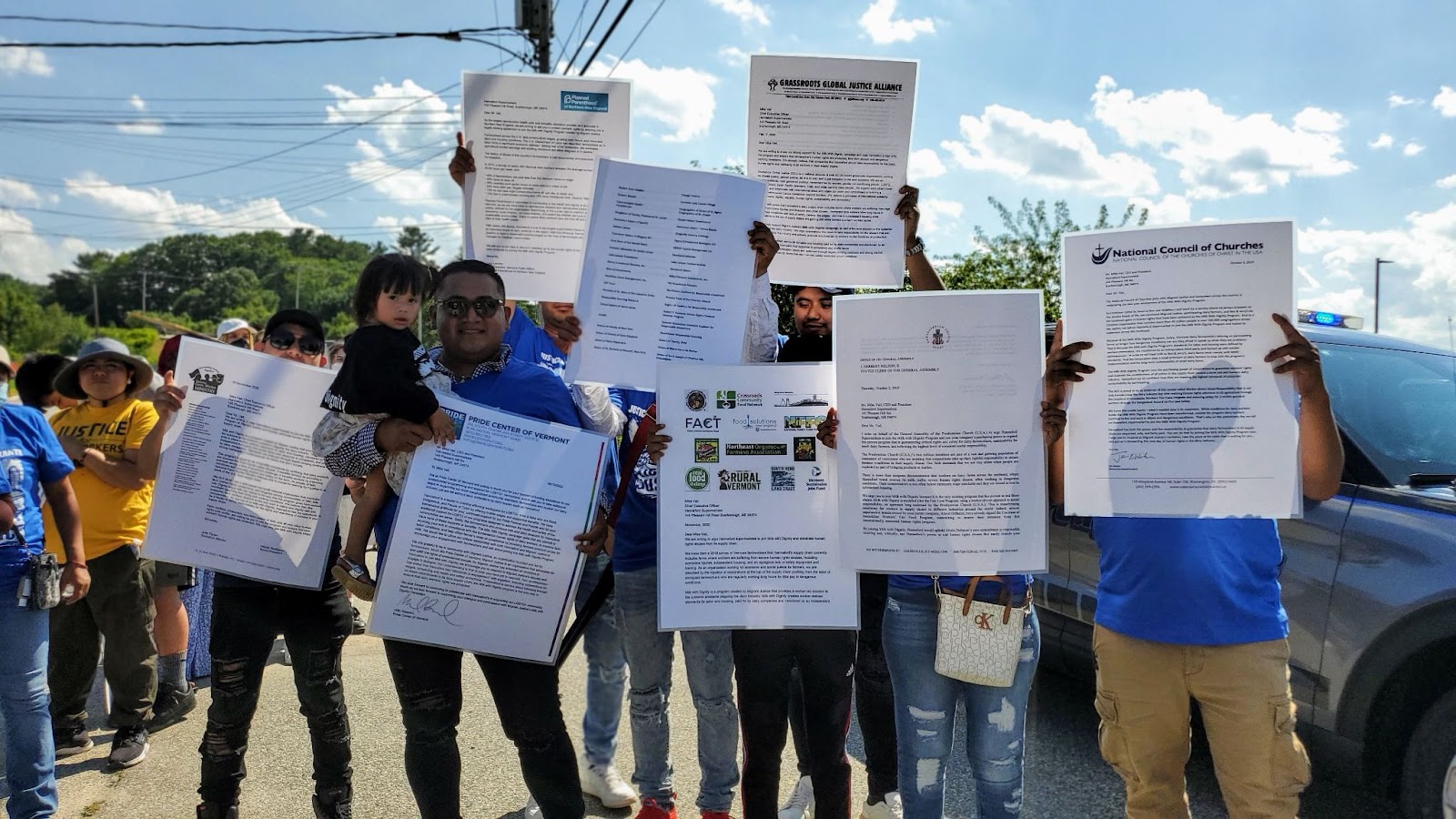 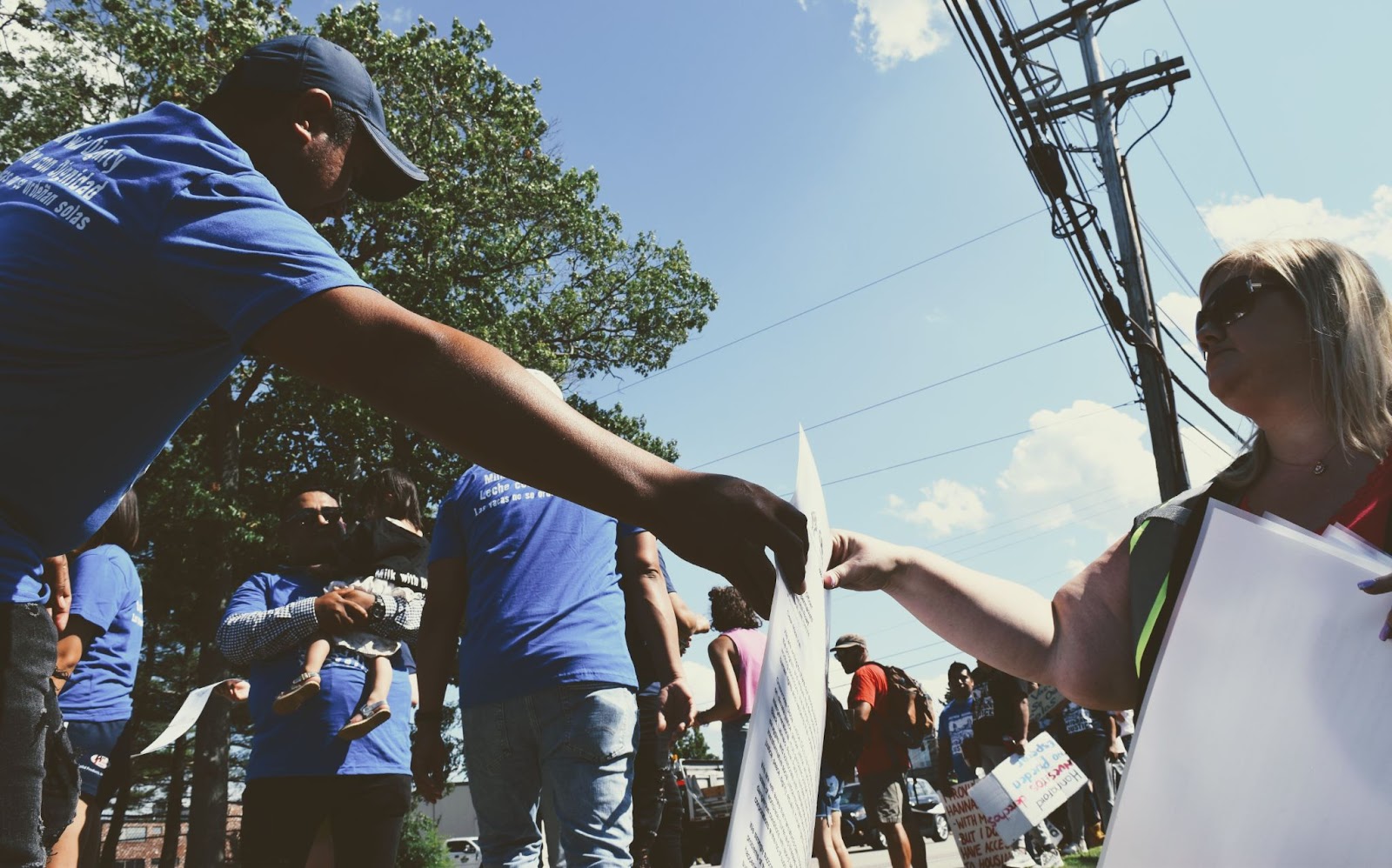 Though workers asked for Hannaford President Mike Vail to come out to receive the letter directly, Mike was nowhere to be found. 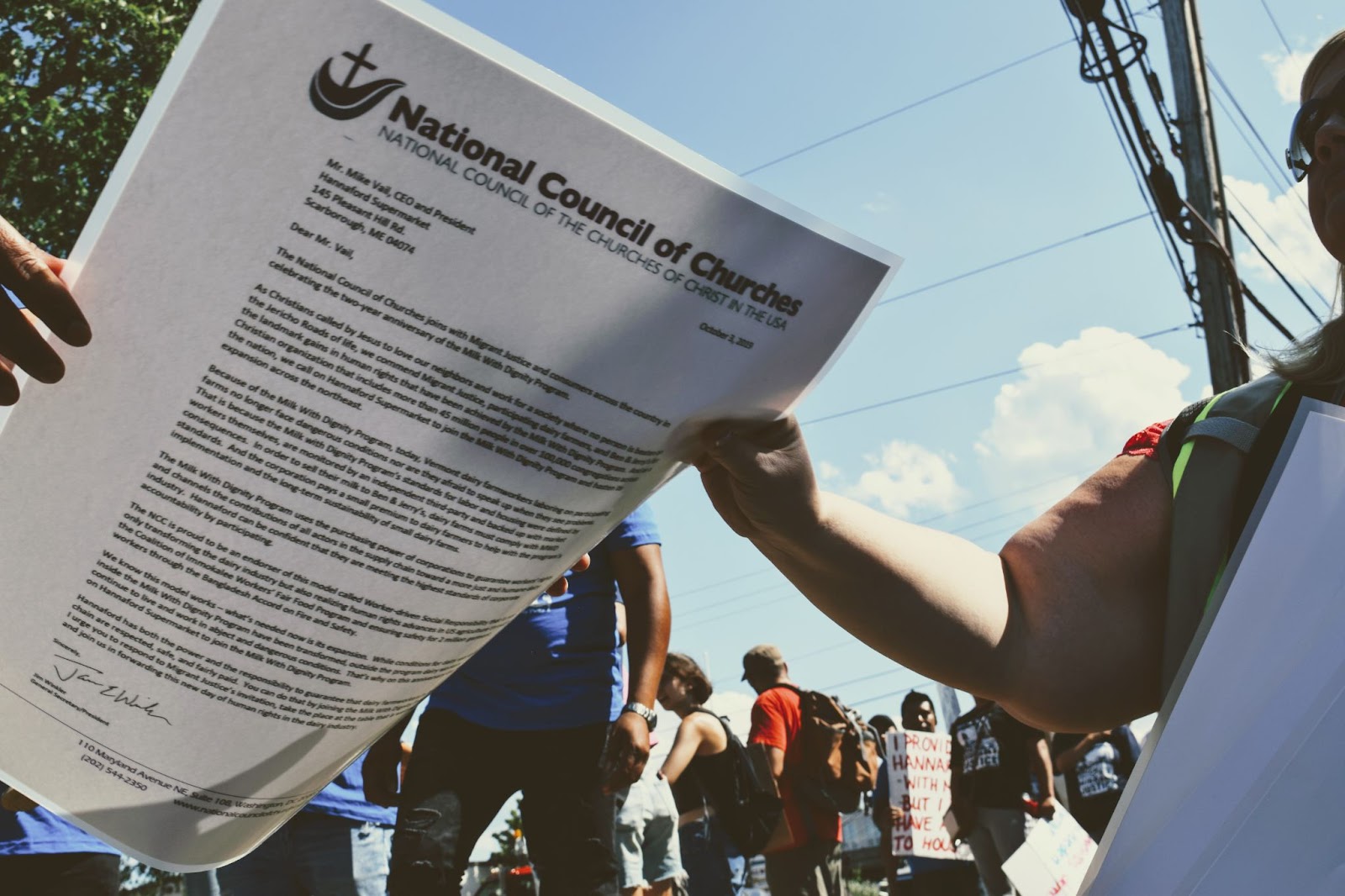 Instead, the letters were handed off to one of the security personnel present – with a promise that they would make their way to the President’s hands. 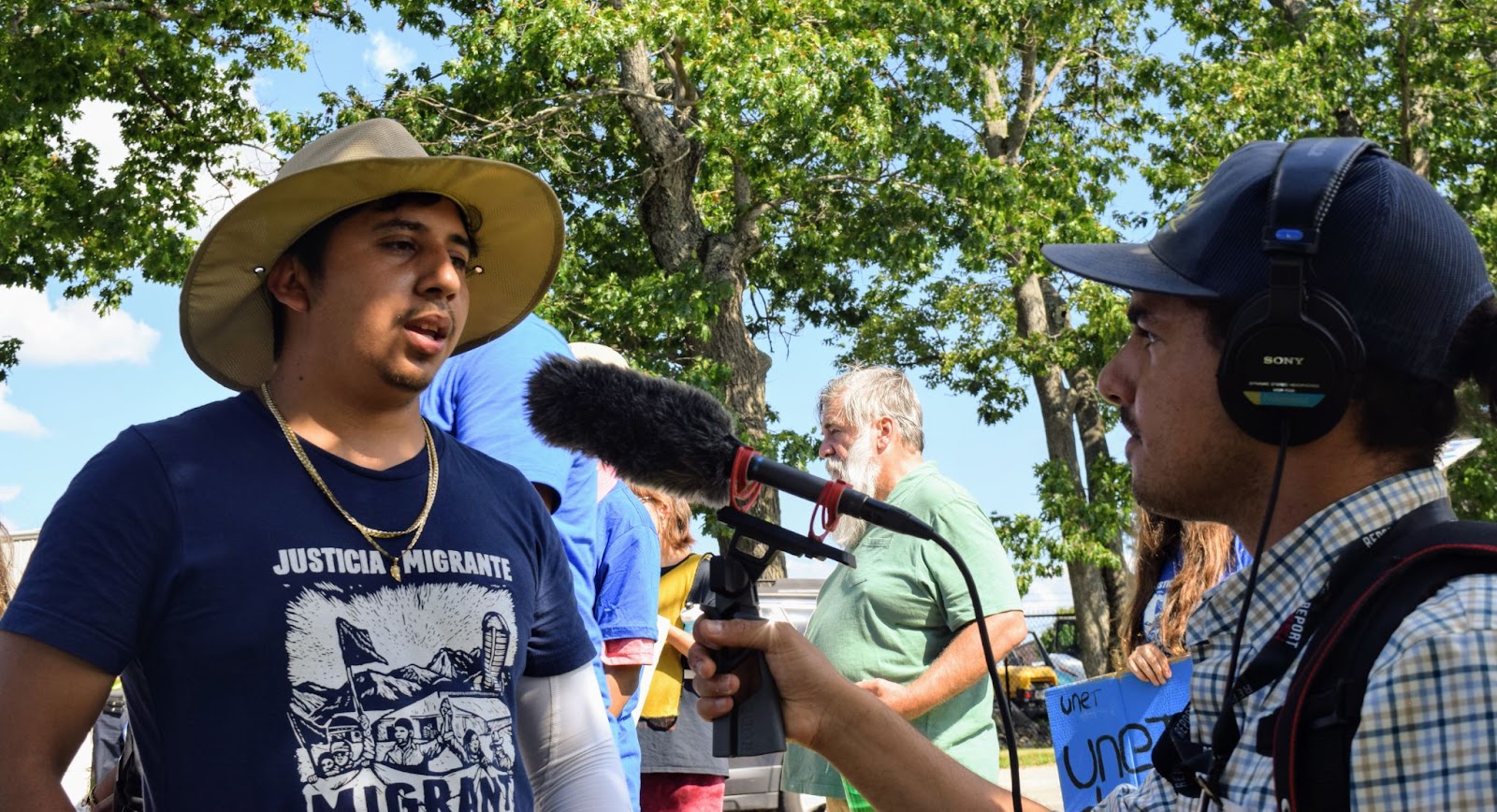 As the action wrapped up, reporters swarmed in for interviews with the farmworkers who had led the day’s events. 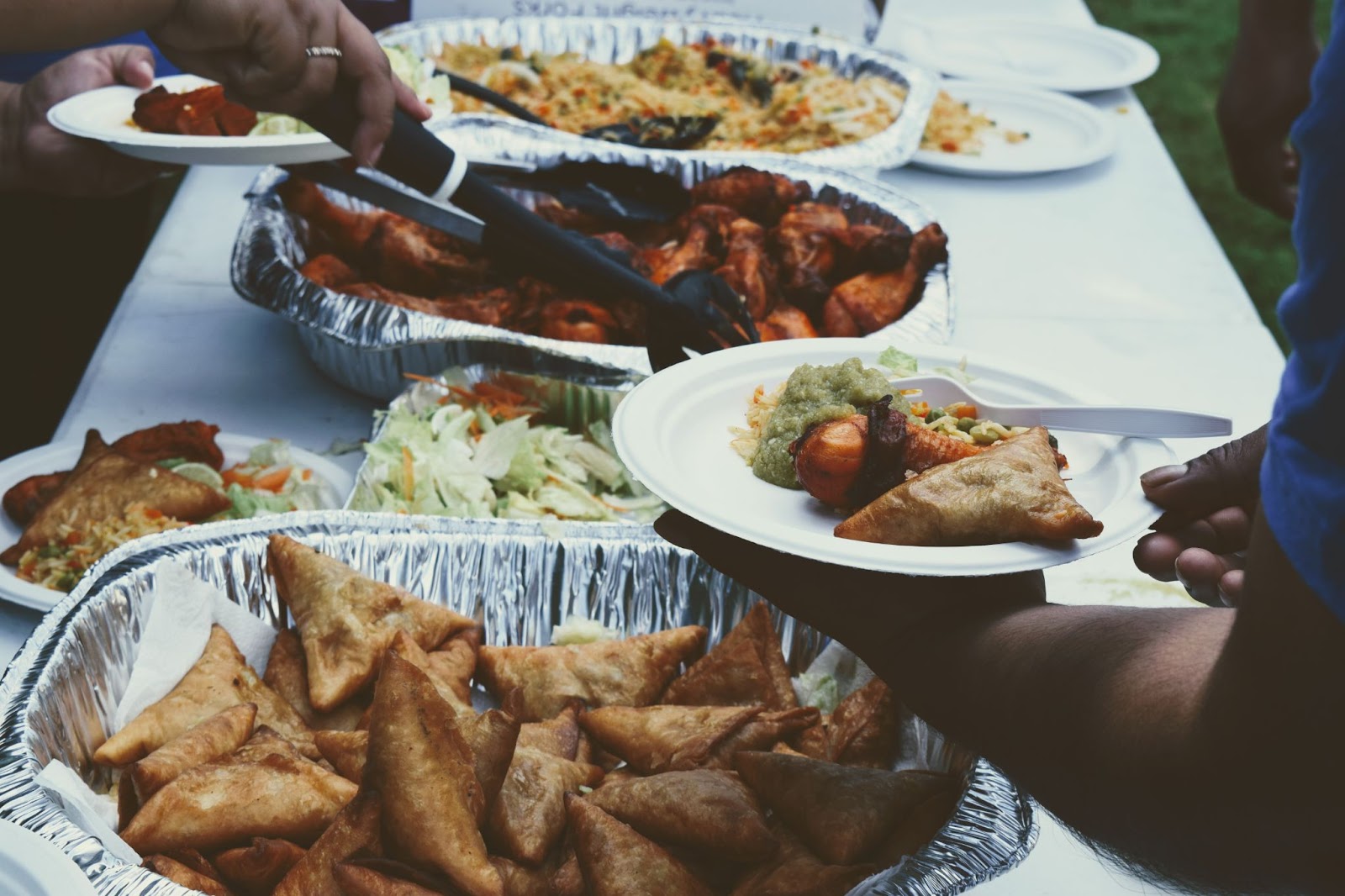 And of course, it wouldn’t be a Migrant Justice rally if we didn’t end the day with a delicious meal to recharge our batteries and fill our stomachs before the long trip home!

Like what you see? Actions like these need resources to be successful! Can you donate $25 to help offset the food and transportation costs for the picket of Hannaford’s headquarters?