Farmworkers facing poor conditions and abuse in Hannaford’s dairy supply chain are announcing one final action before the year is out. On Sunday 12/18, dairy workers will lead a march to the Hannaford Supermarkets in Middlebury, Vermont. Marching through the heart of Addison County – a region full of farms supplying milk to Hannaford – dairy workers and allies will call on the grocery chain to take responsibility for ending abuses in its supply chain by joining Milk with Dignity.

Sunday 12/18 at 10:30am: join dairy workers to close 2022 with one final march on Hannaford! Meet at the Kinney Drugs (40 Court St.) to rally before marching to Hannaford.

This year has been packed with farmworker-led actions building pressure on Hannaford to join Milk with Dignity. With multiple protests at the corporate headquarters in Maine, 30 coordinated actions on Mayday (including hundreds marching through Burlington), weekly pickets throughout the month of October, and more, farmworkers have been relentless in their drive for rights and dignity. Check out the video above for a recap of October's month of action!

Allies across the northeast have stepped up as well, with many communities “adopting” their local Hannaford and regularly holding vigils, educating consumers, and engaging with managers. In just the the last month, allies have held actions in Morrisville, VT; Bennington, VT; Camden, ME; and Saco, ME. 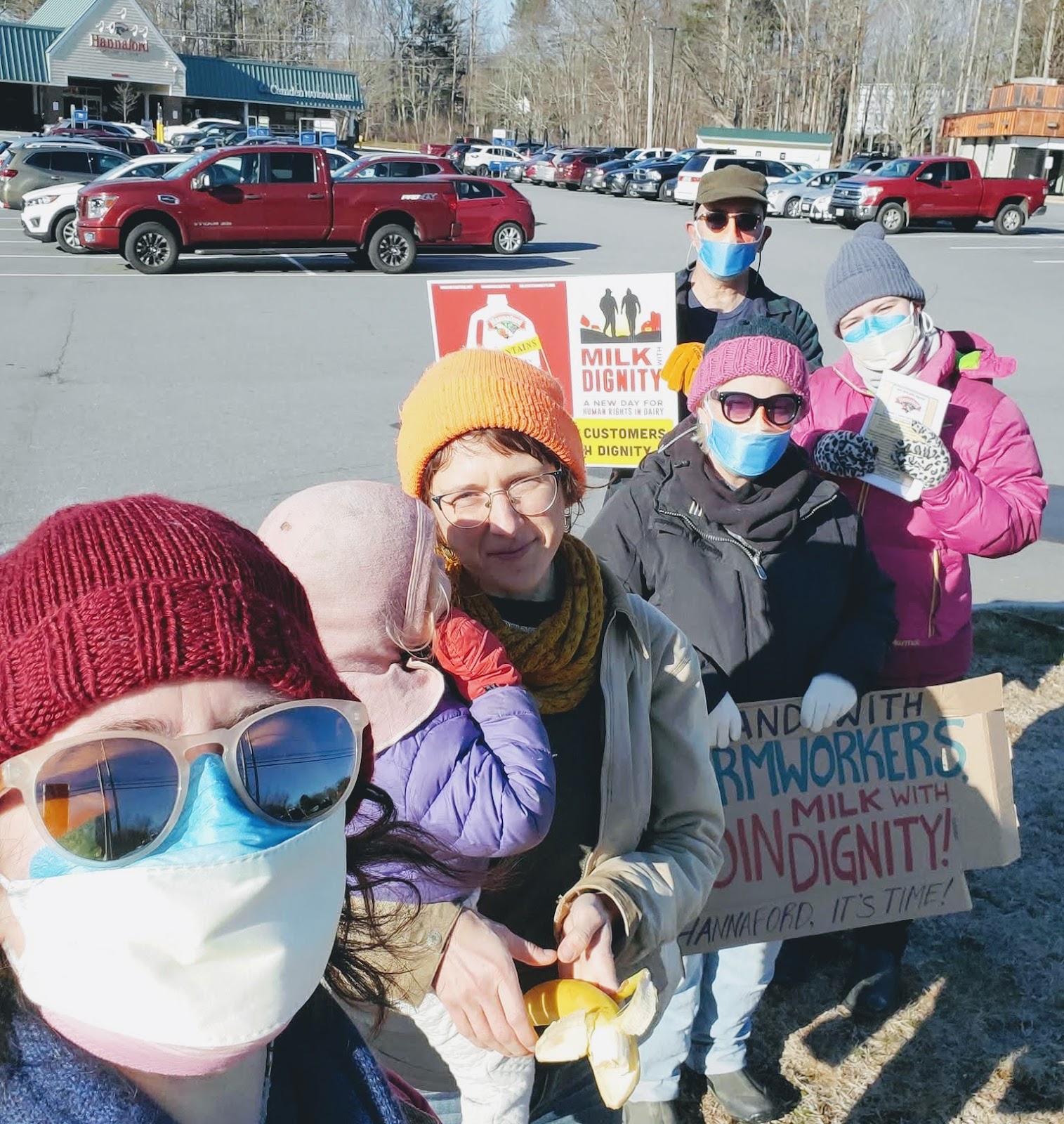 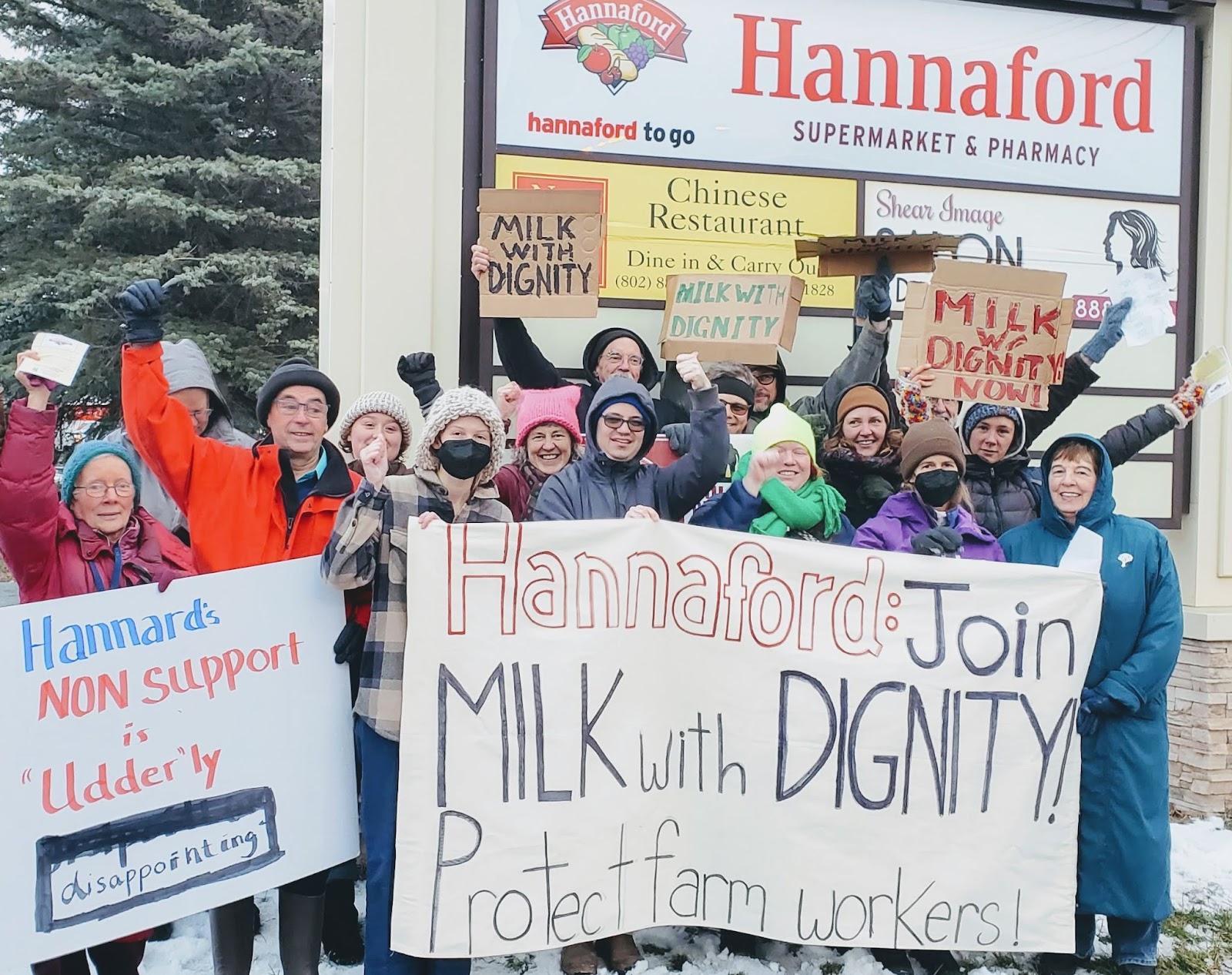 This pressure is working! Hannaford is feeling the heat. After initially stonewalling farmworkers and denying any problems, the company has been forced to open a complaint line to workers in its supply chains. Hannaford tells consumers and shareholders that it is committed to investigating all complaints. On paper and in public statements, Hannaford has accepted that it is responsible to ensure its products are produced free from human rights violations. But in reality, the company is falling far short.

As dairy workers have used the complaint line to denounce poor conditions and human rights violations on the farms supplying Hannaford-brand milk, the supermarket has looked to sweep the complaints under the rug. Months pass before the company answers complaints – when it responds at all. When investigations do occur, they are cursory, biased, and ignore major elements of the complaints made. No changes have been made on Hannaford farms and no employers have been held responsible.

Without objective investigations and real enforcement of rights, these changes amount to little more than a public relations ploy. And without any protections against retaliation, most workers will not come forward to begin with. Hannaford’s complaint line and “investigations” stand in stark contrast to the worker-driven Milk with Dignity Program, defined by worker-authored standards, a 24-hour support line staffed by trusted professionals, protections against retaliation, speedy and thorough investigations, and enforcement mechanisms backed by real market consequences for non-compliance. (In case you haven’t seen it yet, be sure to read the impact report of the program’s first five years!)

Farmworkers aren’t fooled by Hannaford’s gimmicks. While worker and consumer pressure has forced Hannaford to react, we know that the only way for the grocery chain to truly protect the rights of dairy workers producing Hannaford-brand milk is to join the Milk with Dignity Program.

March with farmworkers Sunday morning to end the year with a strong message to Hannaford: we demand Milk with Dignity and won’t settle for anything less