Housing in the Hannaford Dairy Supply Chain: “On one half they still keep the tractors, and on the other half is where we live.”

Facundo works on a farm that produces milk for Hannaford Supermarkets. For years, he and his five co-workers lived in an “apartment” built into the side of a garage. “On one half they still keep the tractors, and on the other half is where we live.”

The garage has holes in the walls that let in the winter cold, bare concrete floors, and faulty plumbing that caused black mold to spread along the bathroom floor. “The shower’s so small you can just barely turn around. And the floor is black. You scrub it but it doesn’t go away.”

The six farmworkers shared four bedrooms between them and built furniture out of materials they found on the farm. One worker slept on an overturned concrete basin, originally used as the cows’ drinking trough. Facundo built his bed by laying a mattress on a few layers of plywood.

The workers’ housing was infested with cockroaches and rats. “The wooden wall in the living room is broken, and [the rats] live and breed in there. I’ve killed about twenty of them, but they keep coming back.” To keep their food from being eaten, the workers would hang it in bags suspended from a wire in the ceiling. “You have to be innovative,” Facundo said.

Organizing through Migrant Justice, the workers asked repeatedly for repairs or new housing. After many delays, Facundo and his co-workers have finally moved out of the garage. While we celebrate workers’ persistence and courage – and that they won’t have to spend another winter living in such inhumane conditions – we must recognize that these conditions are intolerable and should never have been permitted in the first place. 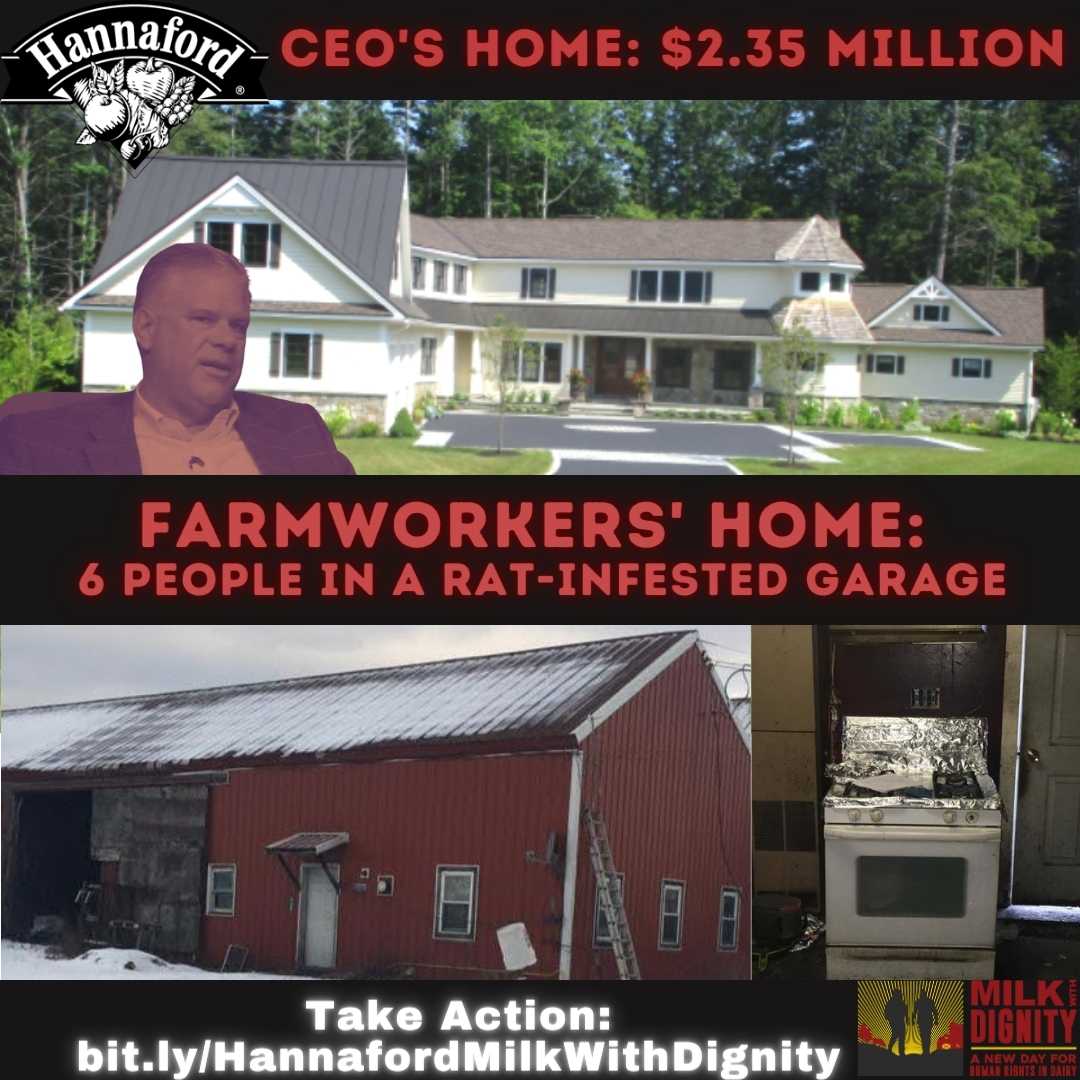 Hannaford has a responsibility to protect the human rights of workers in their supply chains, a responsibility that they claim to recognize. Responding to Migrant Justice’s campaign, their company spokesperson stated: “We expect all of our suppliers to follow the law and treat workers fairly.” Despite this claim, the company is continuing to profit off of workers’ misery.

While the farmworkers behind Hannaford-brand milk are forced to “innovate” – sleeping on concrete troughs next to tractors and taking pains to avoid rats and mold – Hannaford President Mike Vail sleeps in a $2 million seaside mansion.

This inequality and exploitation shocks the conscience; such conditions can not be allowed to persist. Luckily for Hannaford, an alternative exists: farmworkers have built the Milk with Dignity Program to secure their human rights. Using worker-defined standards backed up by strong enforcement mechanisms, Milk with Dignity is the only program able to stamp out human rights abuses and ensure dignified treatment in a company’s dairy supply chain.

For over a year, Hannaford has hid from its responsibility and failed to recognize the opportunity presented by Milk with Dignity. Instead, the company has responded with hollow commitments, all while continuing to bring in record-breaking profits during the pandemic.

Do you think it’s time for Hannaford to get with the program? Take these three actions:

Milk with Dignity is transforming the dairy industry and protecting farmworkers’ fundamental human rights. Together, we will ensure that Hannaford becomes part of this solution.