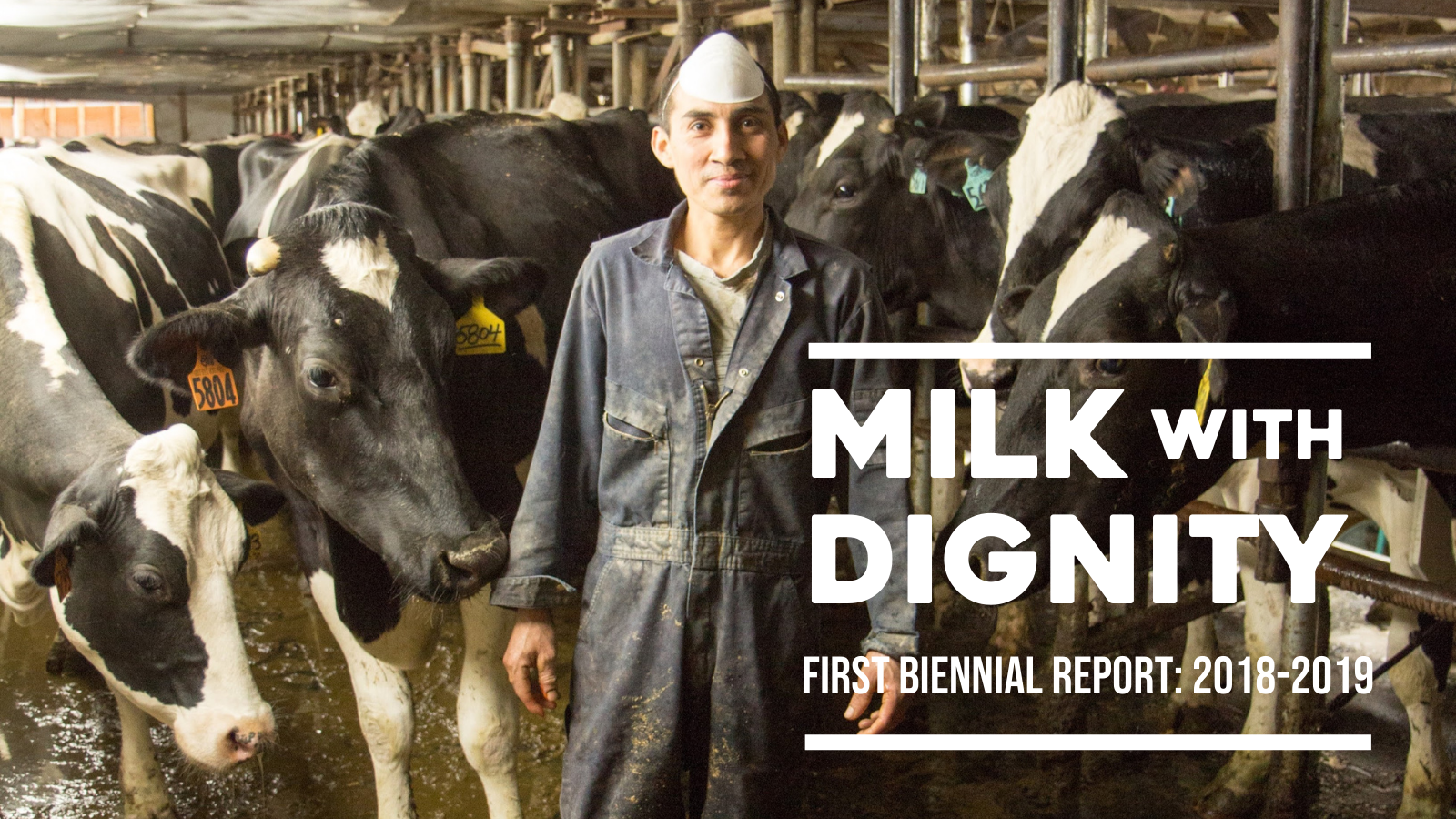 In its first two years, the program: 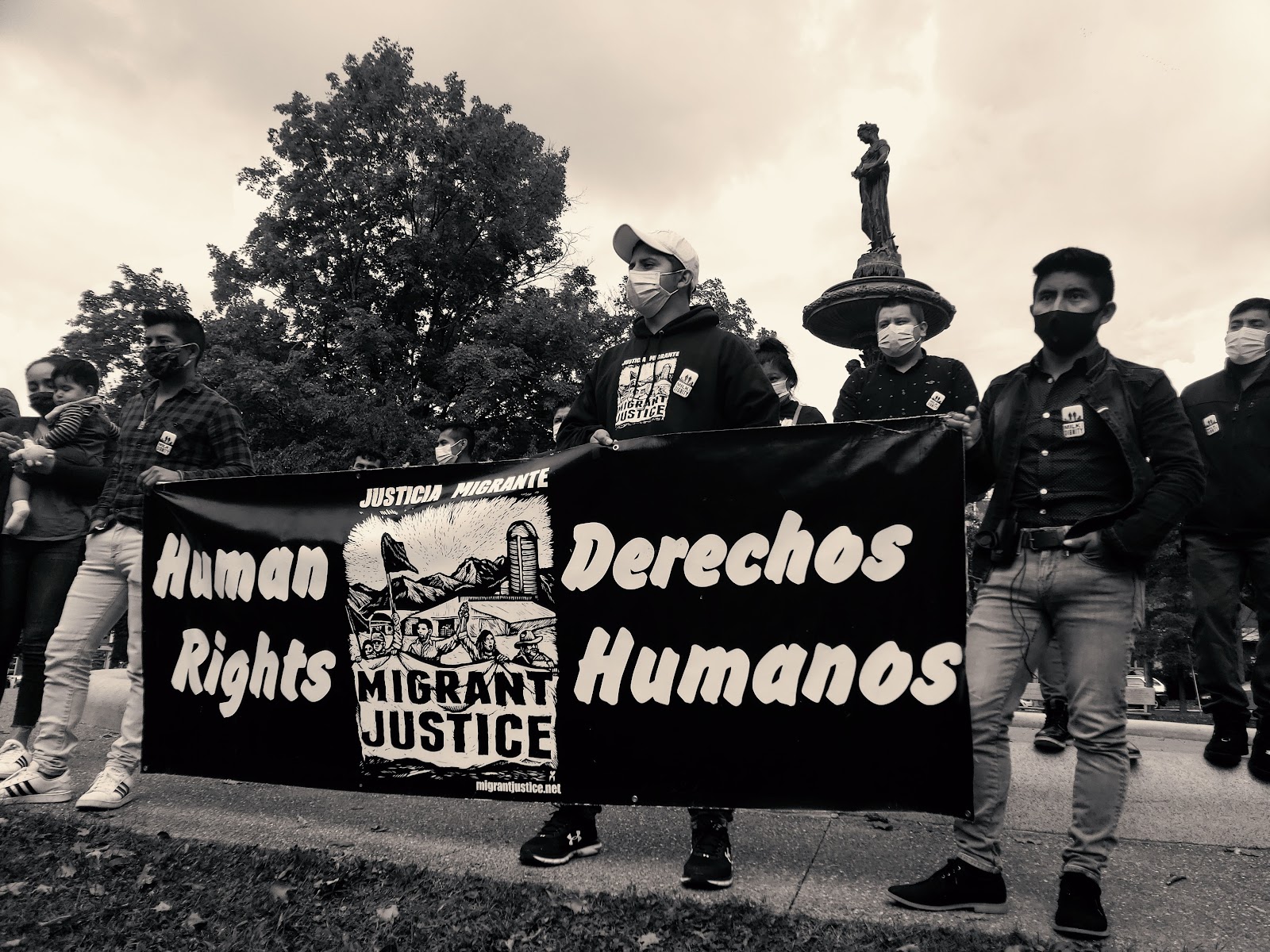 On Saturday – three years to the day after Ben & Jerry’s became the program’s first participating company – farmworkers and supporters gathered in downtown St. Albans to present these findings and more from the Milk with Dignity report. The program’s impact was encapsulated by farmworker Adrian, who shared the contrast of having worked on a farm outside the program with the experience of working on a Milk with Dignity farm:

“I used to work on a farm outside the program, where we worked 12 hour days without breaks for food, and where ten of us lived in a trailer infested with bed bugs. When the pipes froze in the winter, we would spend days without running water. Since I moved to a Milk with Dignity farm, there’s been a huge change. Everything is better: the pay, the hours, there’s enough space for all of us in the house and we aren’t cold in the winter. I want all farmworkers to be able to work in the conditions that I have now.” 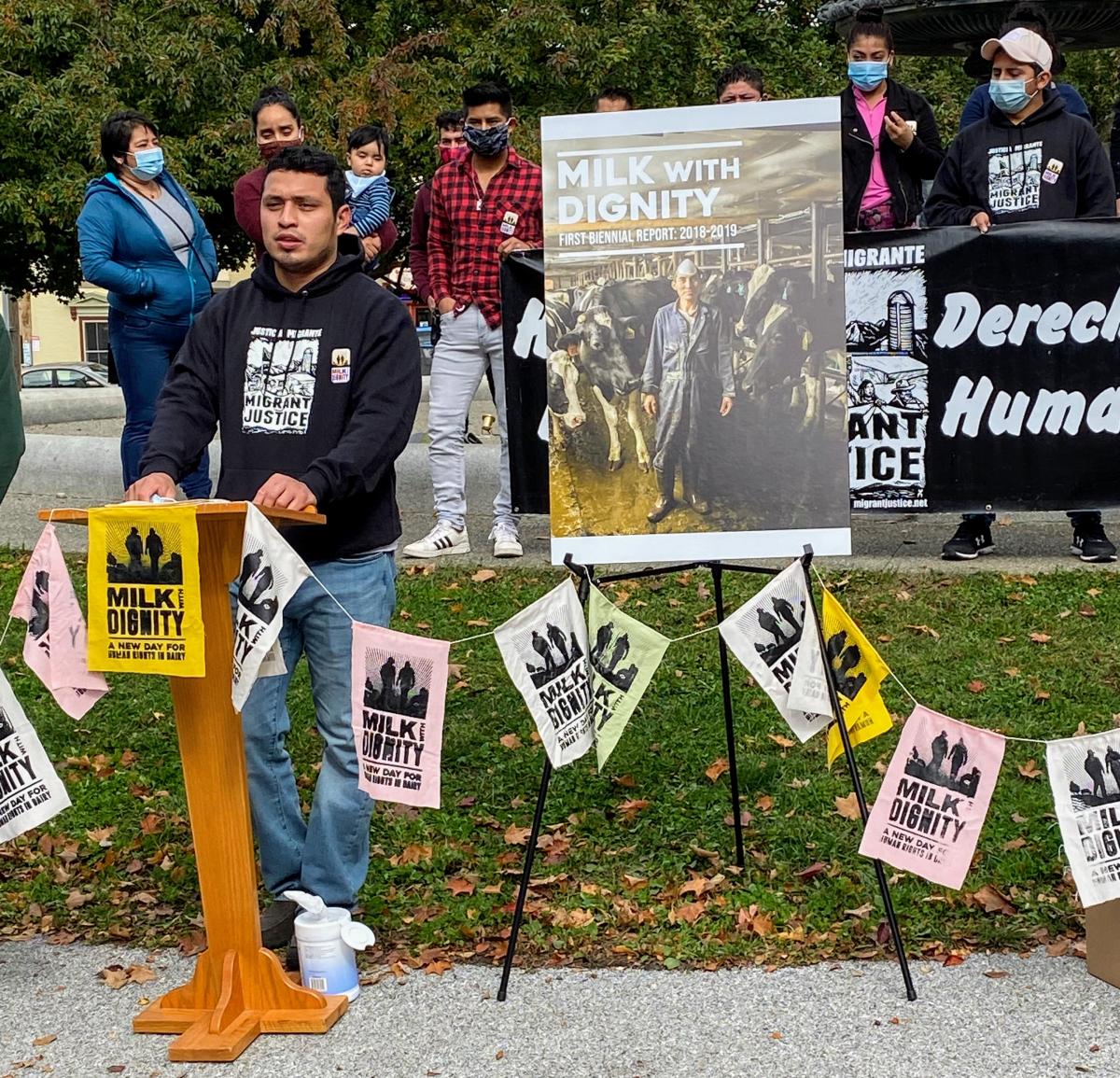 Also speaking at Saturday’s press conference was Tom Fritzsche, Executive Director of the Milk with Dignity Standards Council. The MDSC was created by Migrant Justice in 2017 to serve as an independent organization to monitor conditions on farms in the program and enforce the Code of Conduct. The MDSC maintains a 24 hour hotline, which has received over 300 unique inquiries from workers in the program. The high number of calls shows workers’ faith in the program and in the MDSC’s ability to address their concerns. And indeed, over 90% of Code violations reported through the hotline in the first two years have already been satisfactorily resolved. 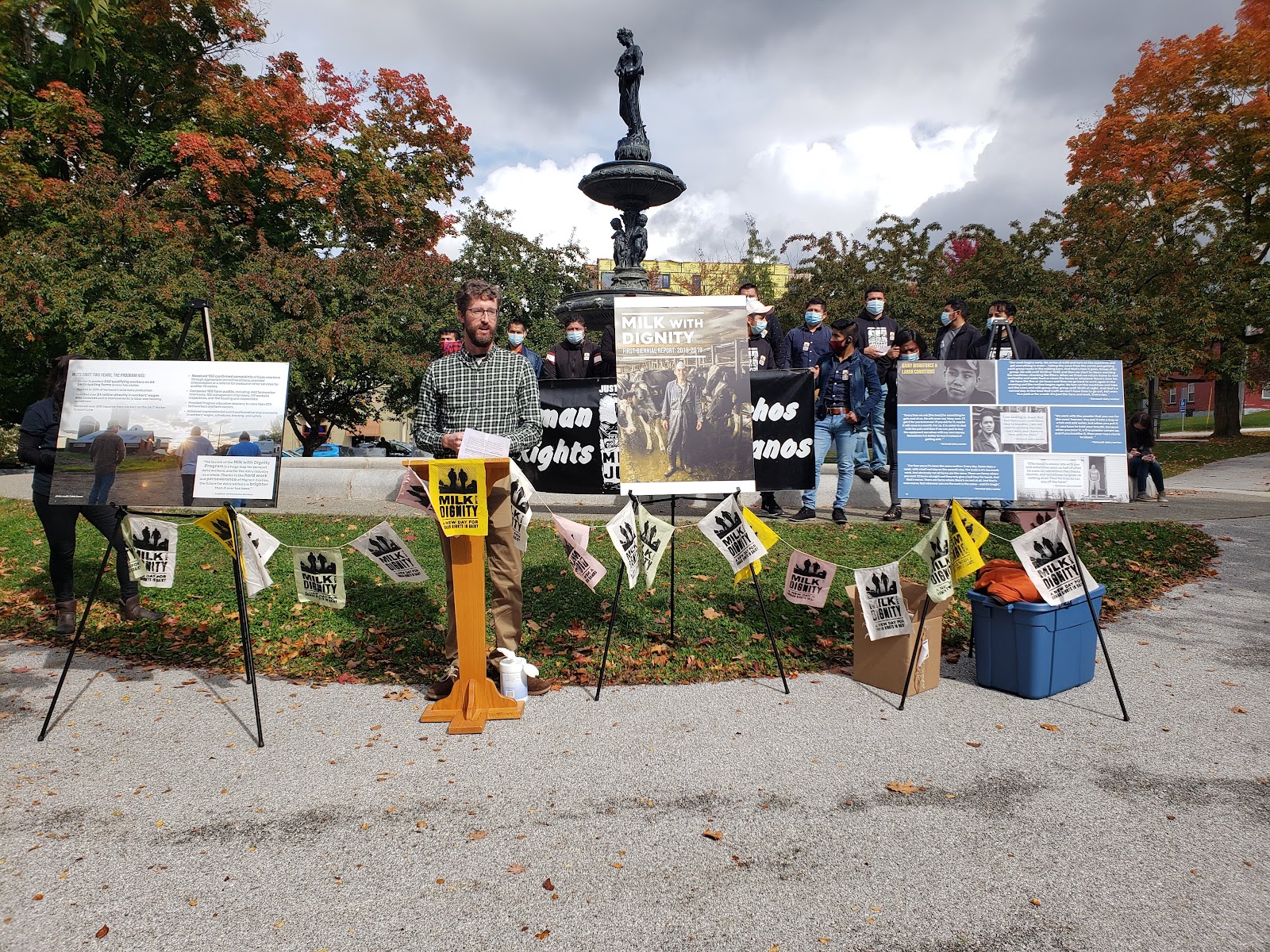 Ben & Jerry’s representative Sean Greenwood attended the press conference and spoke about the company’s ongoing commitment to the program. Since signing a contract with Migrant Justice to join Milk with Dignity, Ben & Jerry’s has paid a premium to all participating farms and has committed to cutting ties with any farm suspended from the program. In the program’s first two years, this premium has resulted in over $1 million directly invested in farmworker wages and working conditions, as well as additional premium money retained by farms as economic relief. This premium has been particularly important during a time of stagnating milk prices. One farmer quoted in the report reflected that the premium “might make the difference between us still having a farm a year from now or not.” Addressing the crowd on Saturday, Sean celebrated Ben & Jerry’s partnership with “the industry-leading Milk with Dignity [program].” 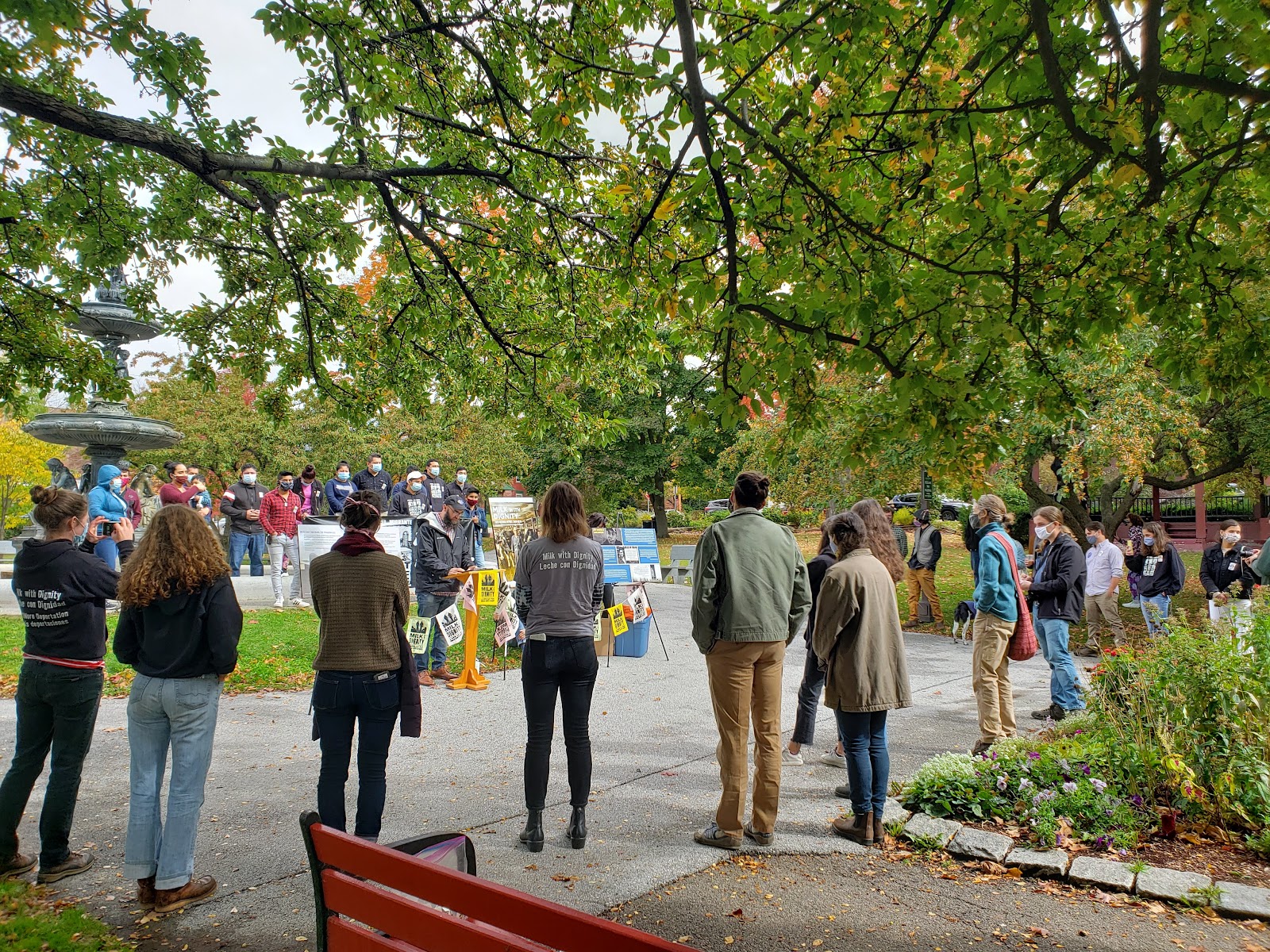 Matt Maxwell, a farm owner enrolled in the program, also spoke. Matt shared his experience as an employer in the program and as a member of the Milk with Dignity Working Group, a body of workers and employers that meet regularly to review program implementation. Matt reflected: “The Milk with Dignity team is always available to help mediate any conflicts, and all of us together – with increased communication and understanding – have made great improvements in creating a positive workplace.” Matt’s presence at the event was a tremendous testament to the benefits that conscientious farmers experience from this worker-led program. 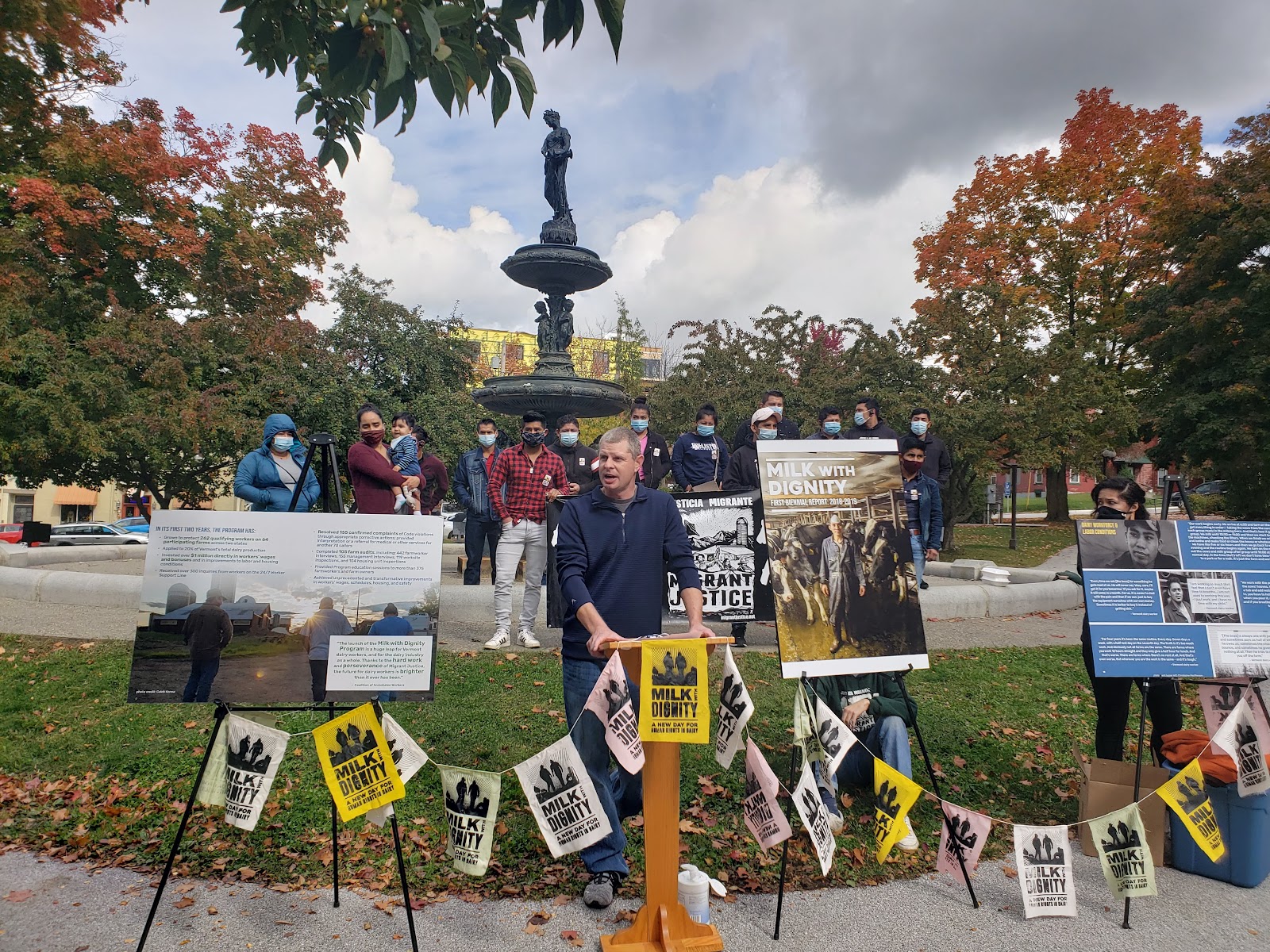 The program ended with farmworker leader José Ignacio, a member of Migrant Justice’s Farmworker Coordinating Committee, speaking powerfully on the need to expand the program to cover more farms and workers. He shared his personal experience living in a rat-infested apartment built into a farm’s garage, where he slept next to tractors and where a co-worker was hospitalized after contracting a virus from rat feces. José Ignacio called out fake corporate certifications like “Fair Trade USA” that pretend to guarantee fair working conditions in company’s supply chains, drawing a contrast with Milk with Dignity as a worker-led program. He concluded by calling on Hannaford supermarkets to join the Milk with Dignity program. 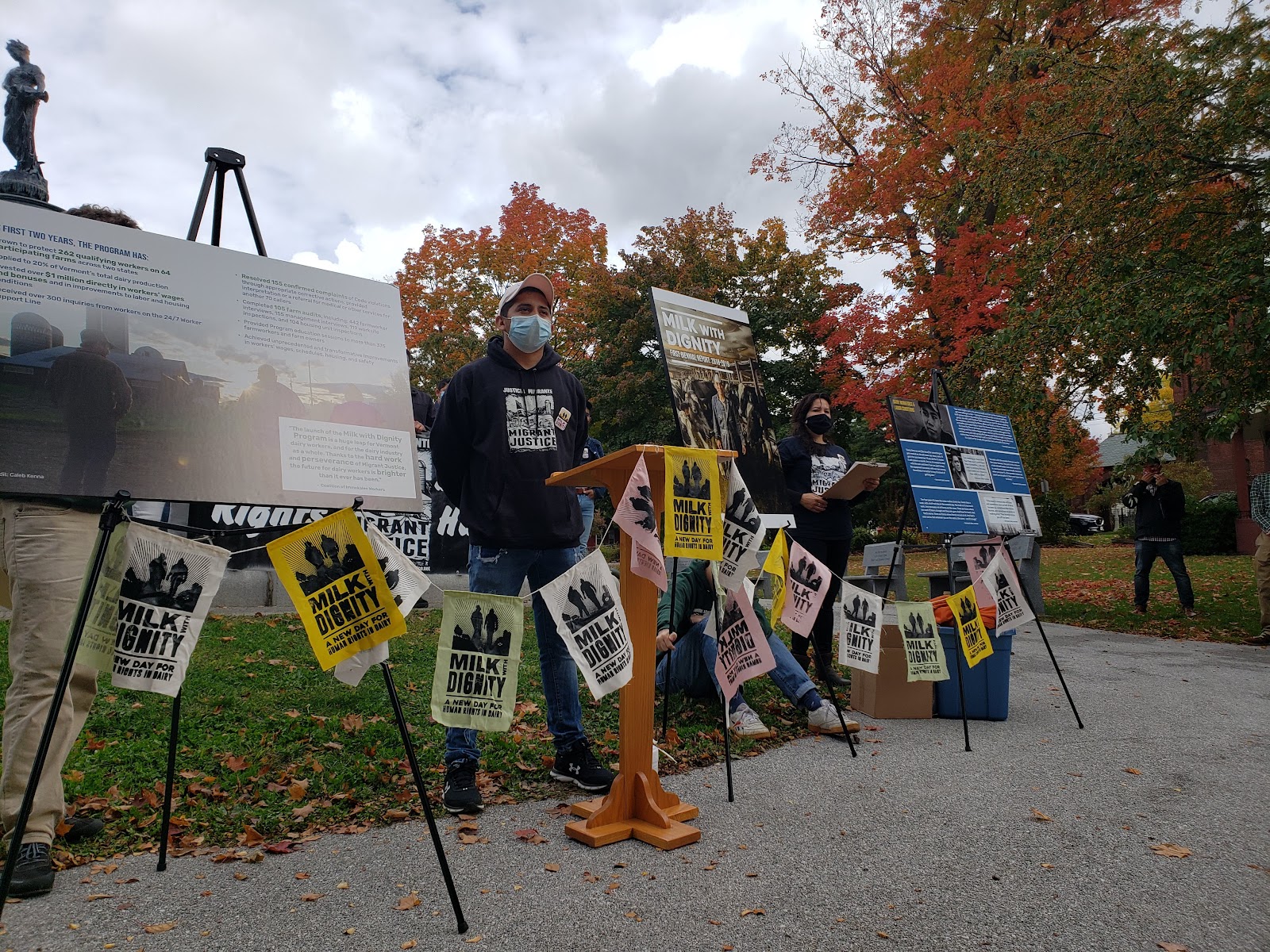 Following the press conference, the crowd travelled to a nearby Hannaford supermarket to deliver the report to the store manager. Saturday marked the one-year anniversary of Migrant Justice’s first public invitation to Hannaford supermarkets to join the Milk with Dignity program. Over the last year, the campaign has gathered steam, with marches, rallies, and car caravans to stores; emails, postcards, and phone calls to the company headquarters; endorsements from high profile organizations and religious communities; and pressure from shareholders on Hannaford’s parent company Ahold-Delhaize. Despite the repeated invitations – and in spite of its record pandemic profits this year – the supermarket chain has yet to heed the call to take responsibility for the abuses on the farms producing Hannaford-brand milk.

A total of 25 delegations to Hannaford stores occurred over the weekend, with farmworkers and allies delivering the reports to managers and asking that the information be shared with company executives. Delegations were carried out at stores across the northeast, from Plattsburgh, NY to Portland, ME, at the doorstep of the company headquarters. Saturday’s press conference and delegations sent a clear message to Hannaford: it’s time to get with the program!

See below for a selection of photos from Saturday’s delegations: 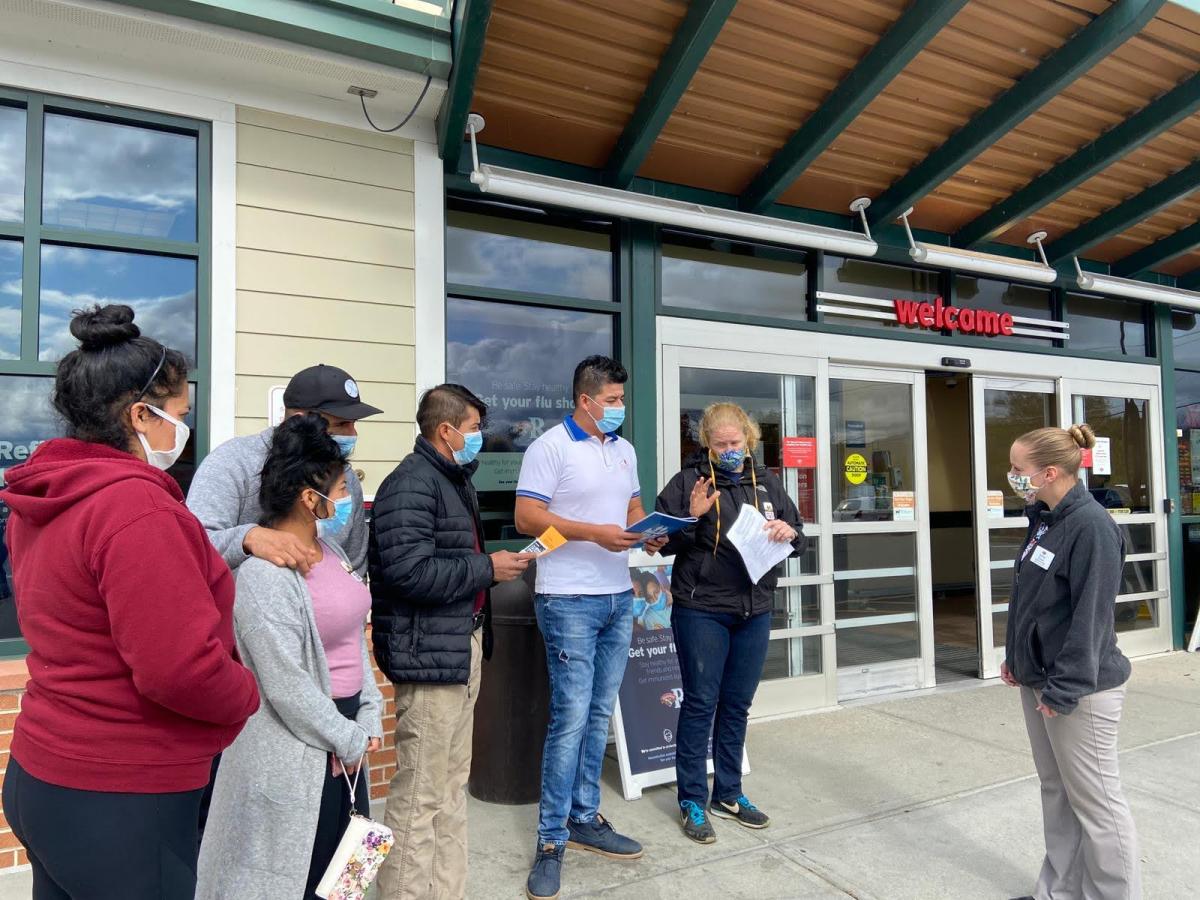 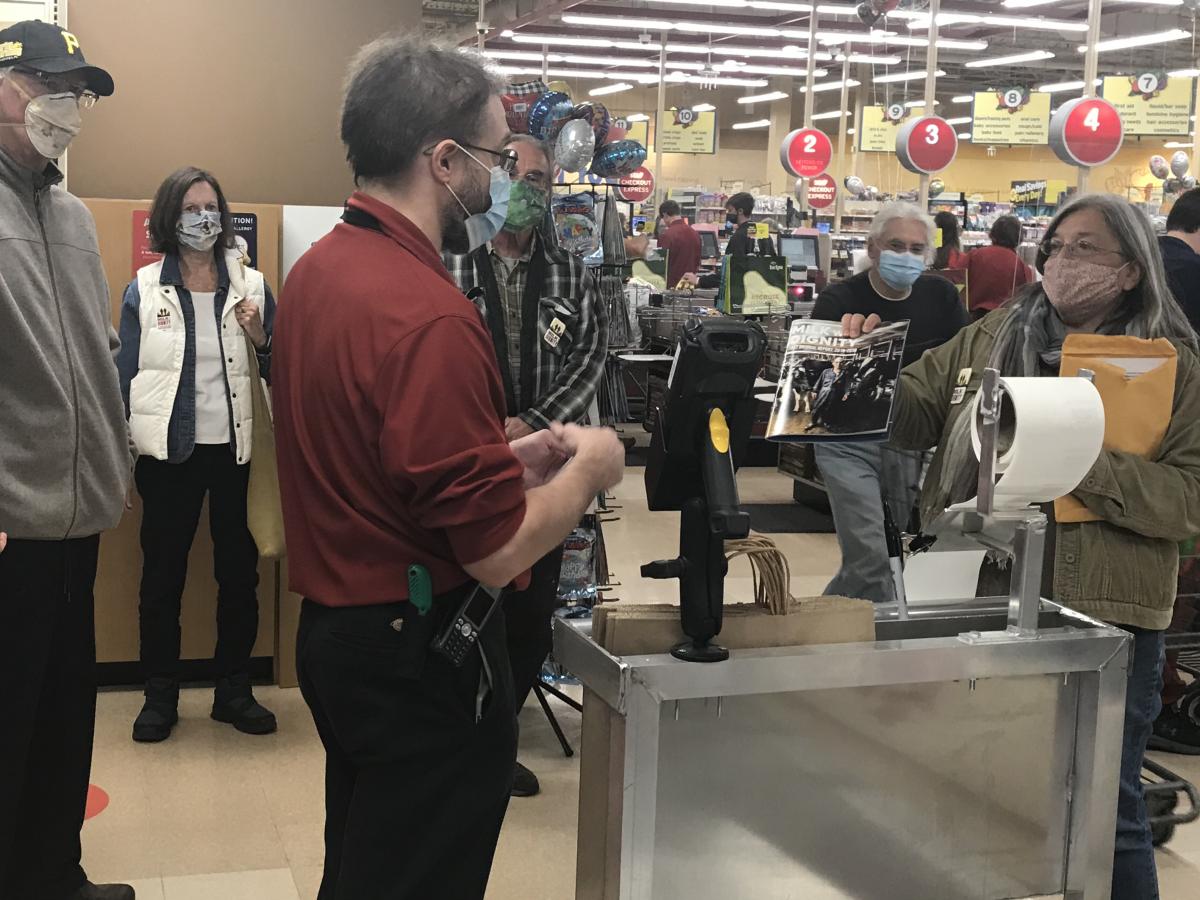 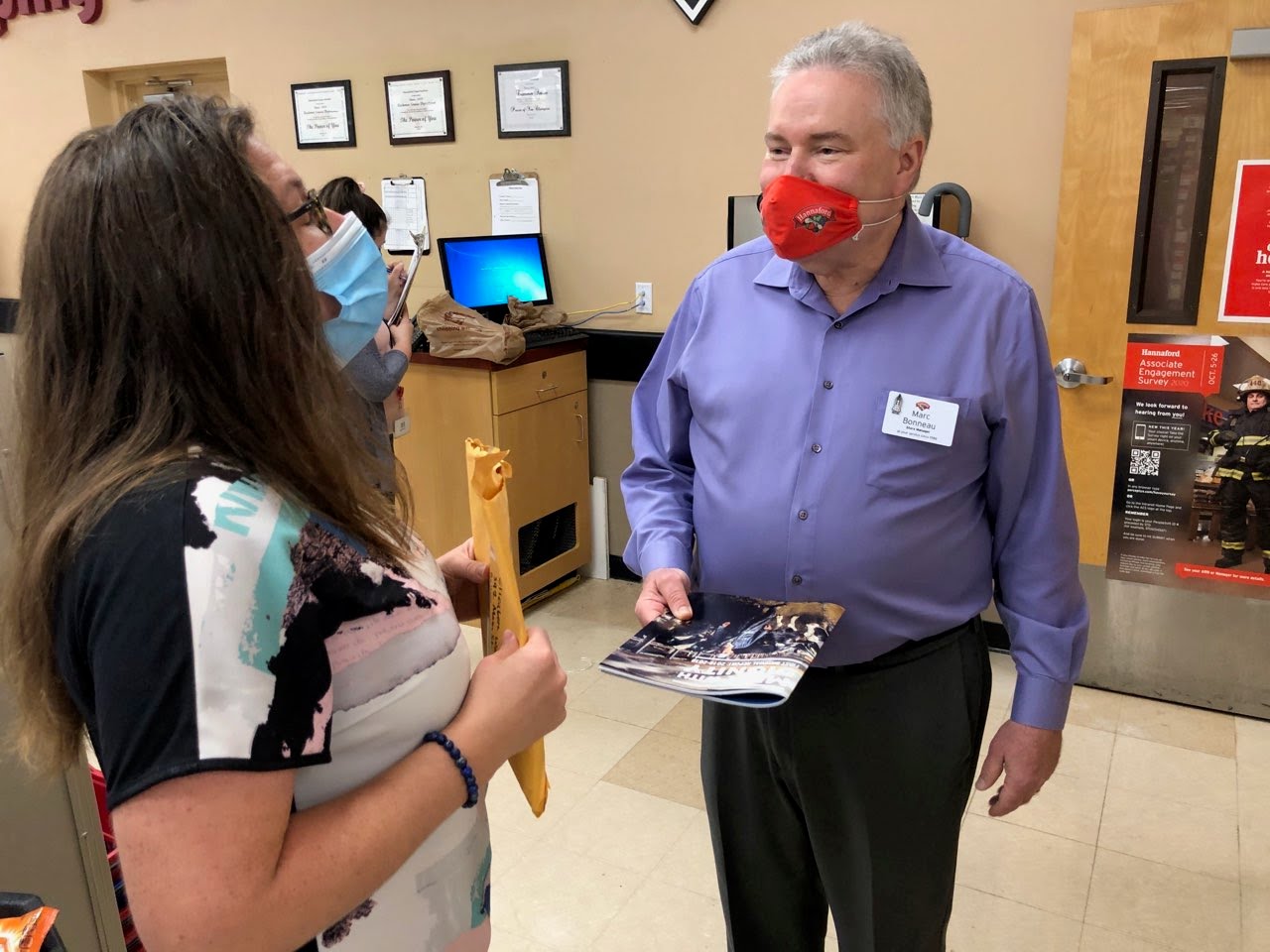 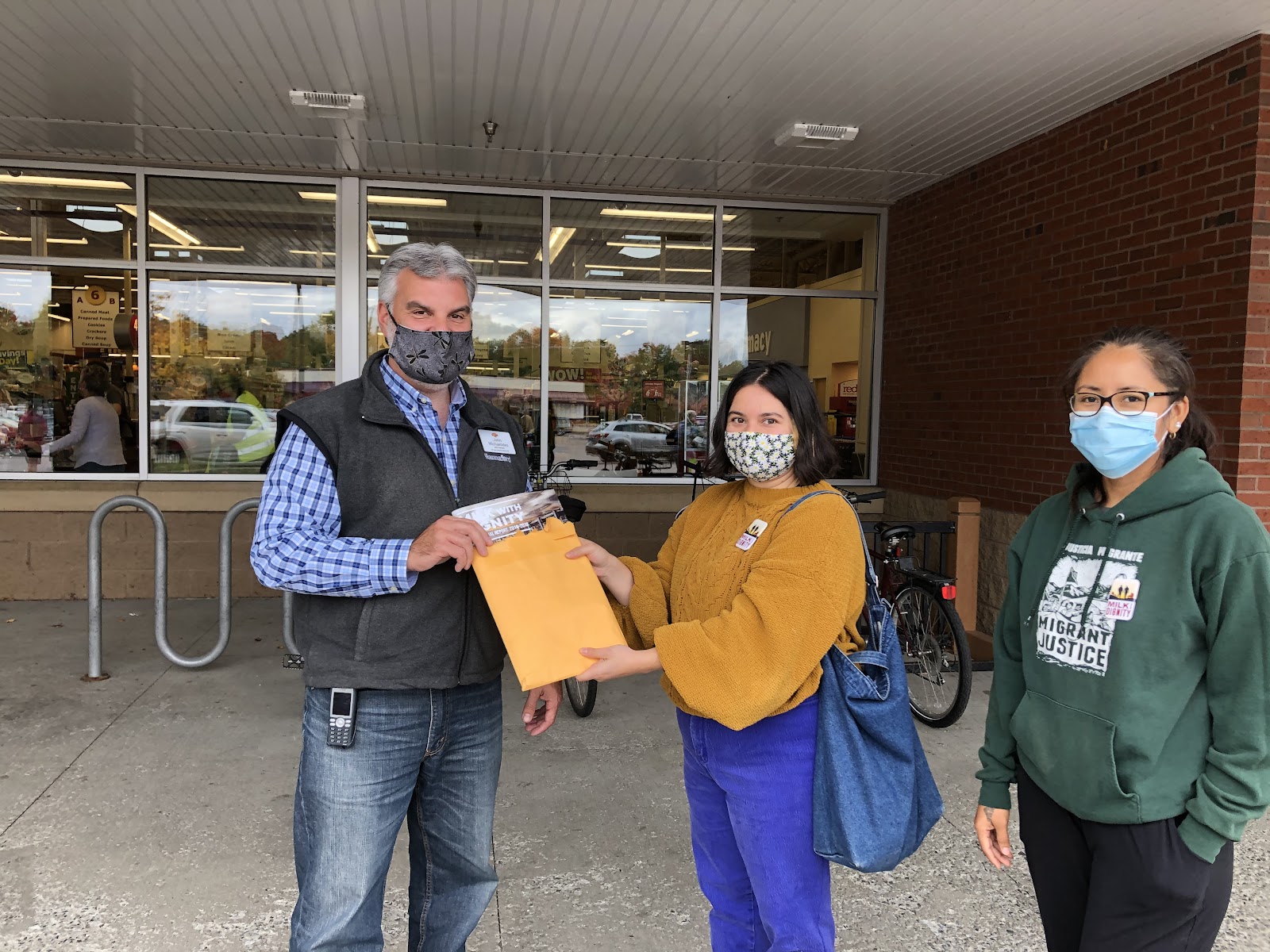 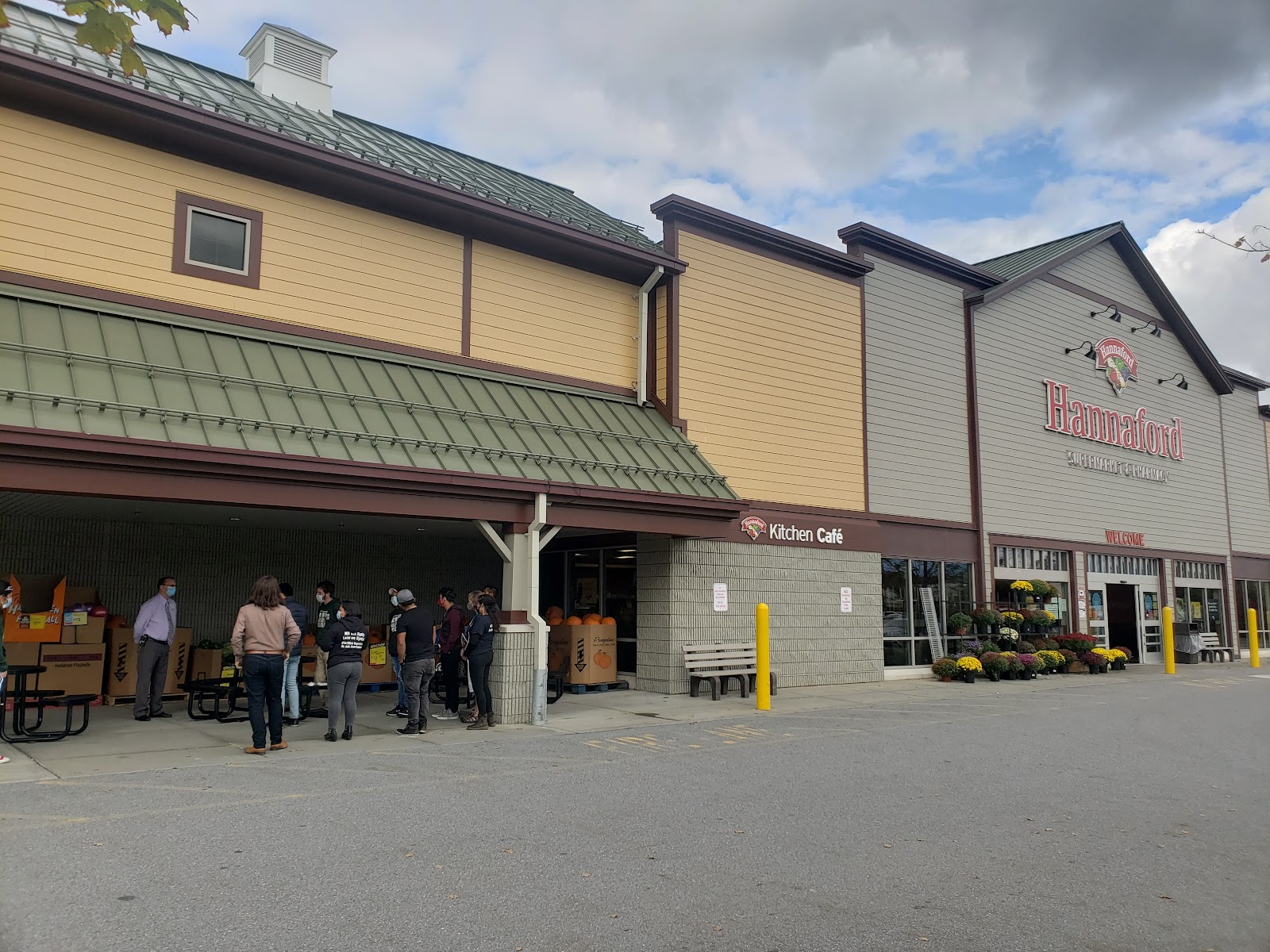 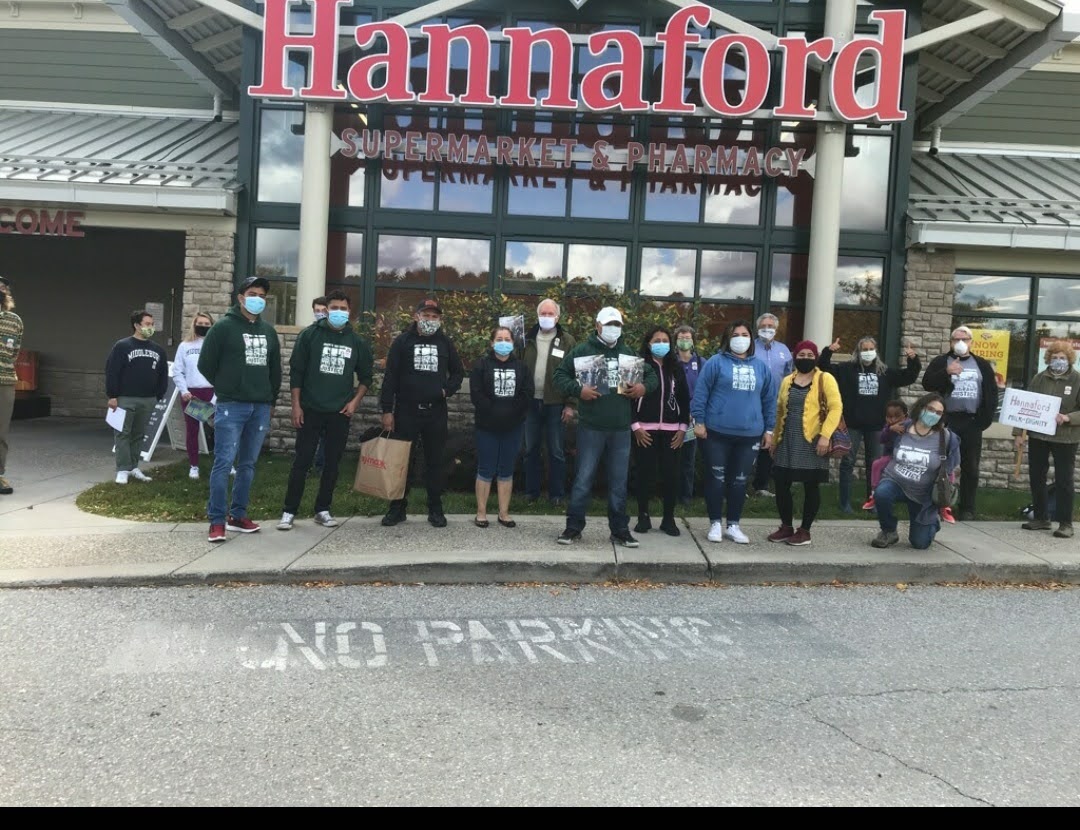 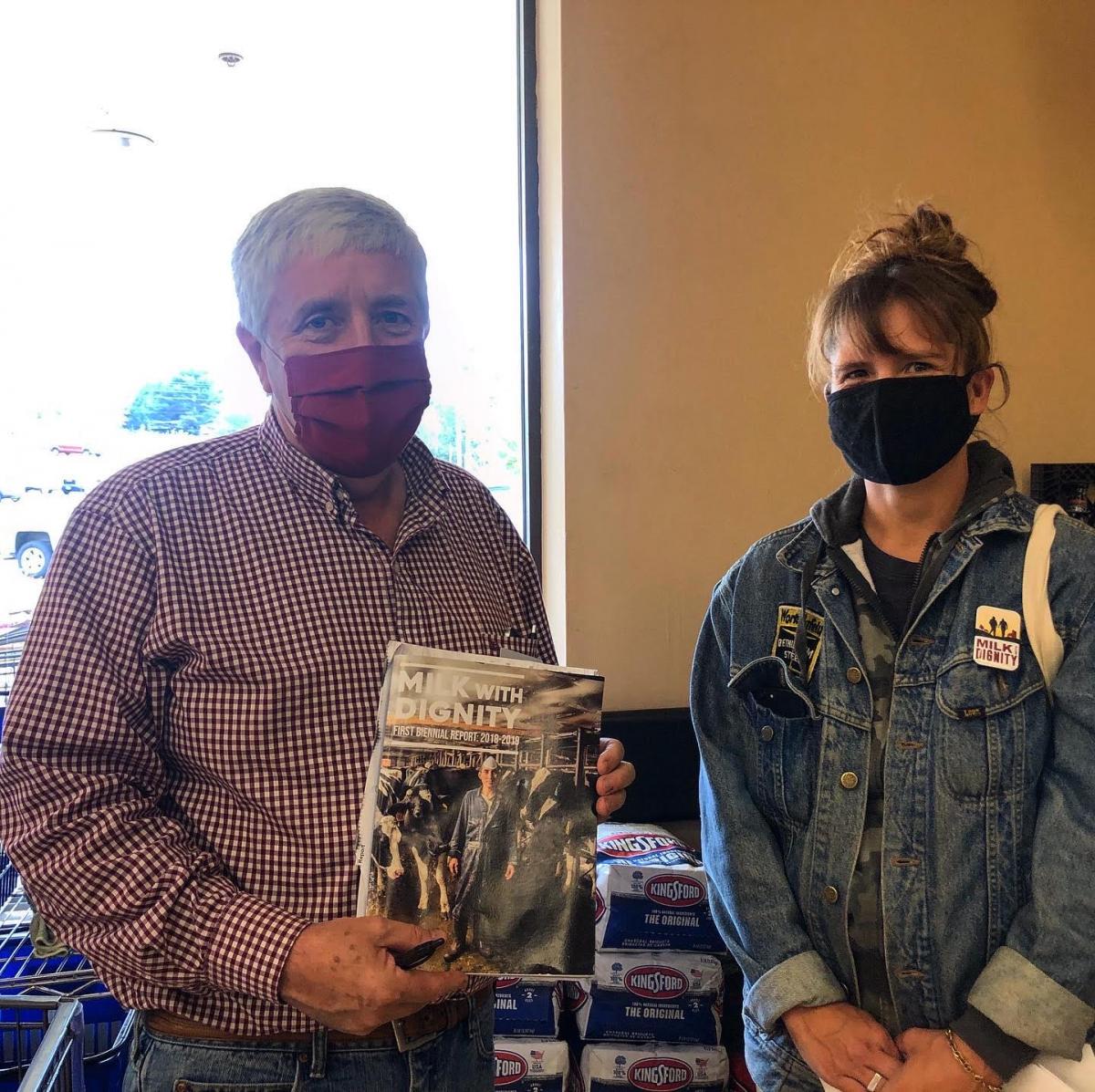 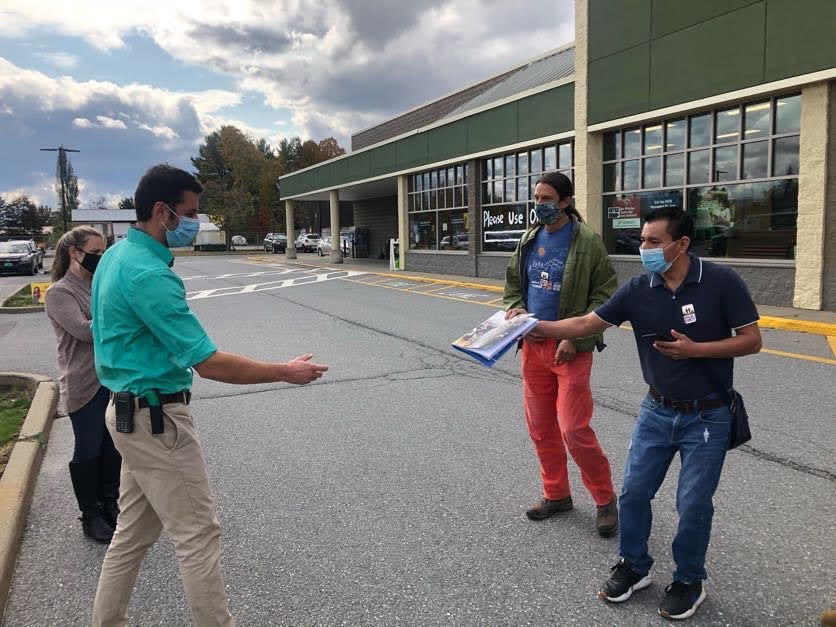 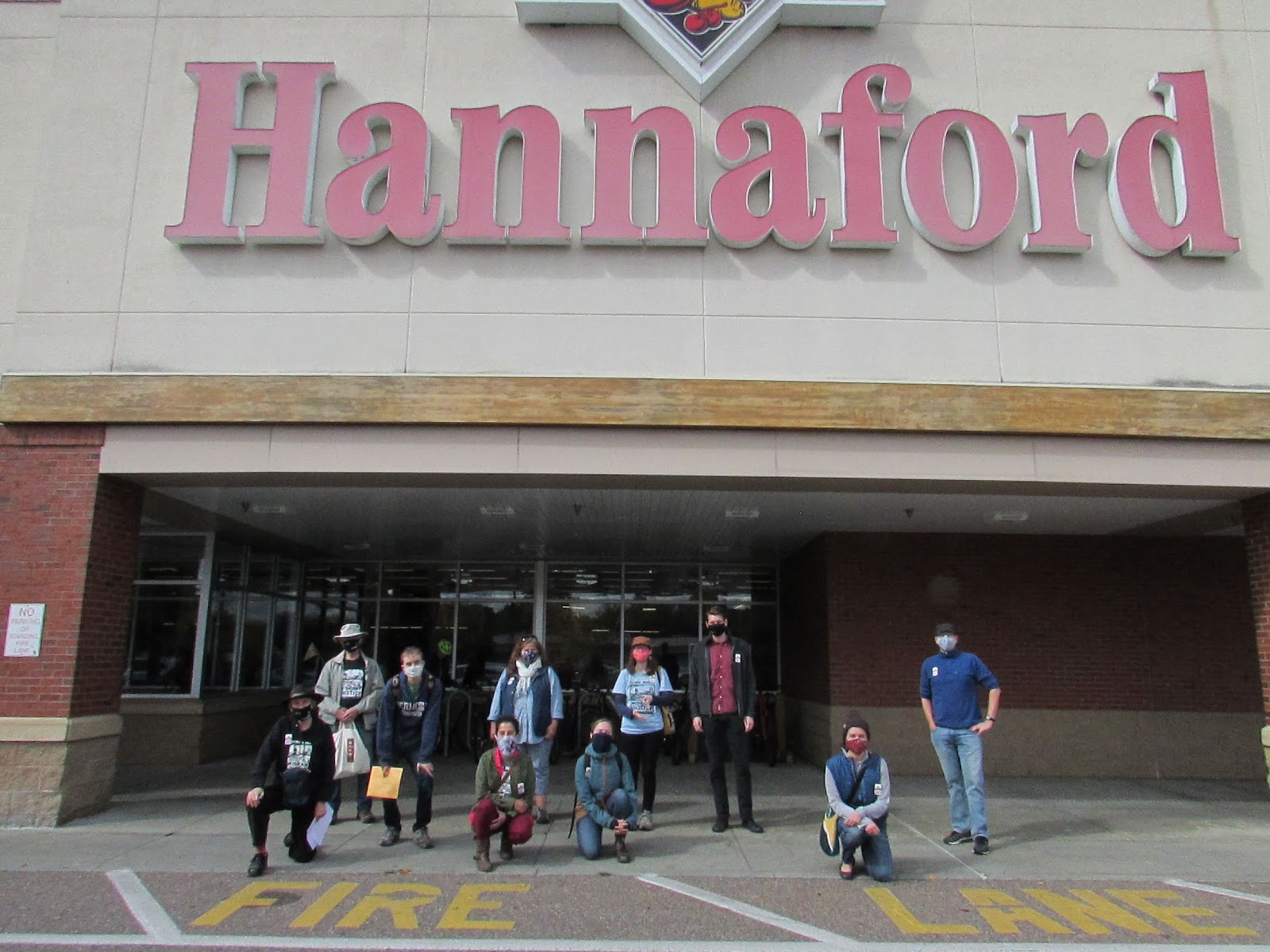 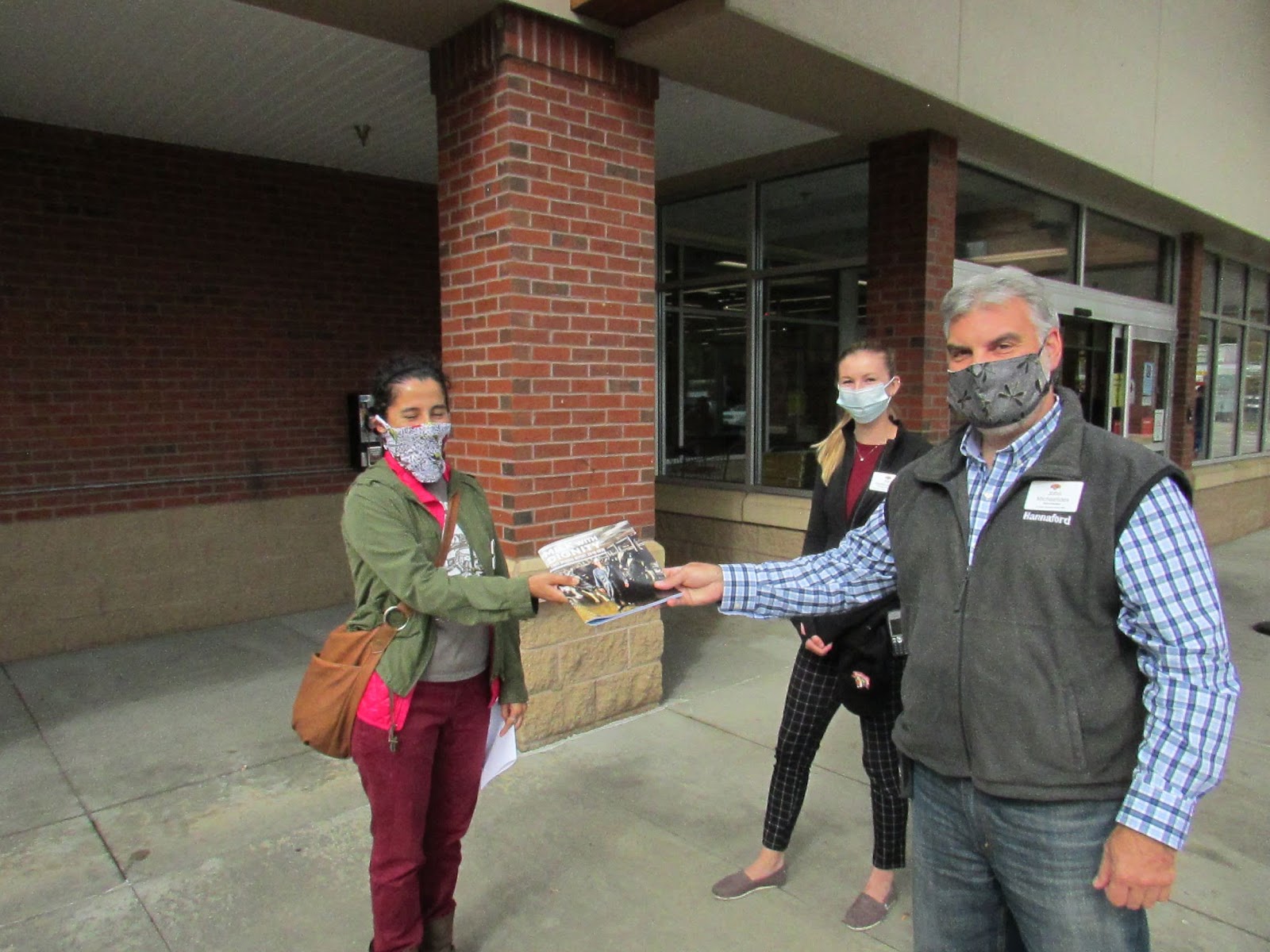 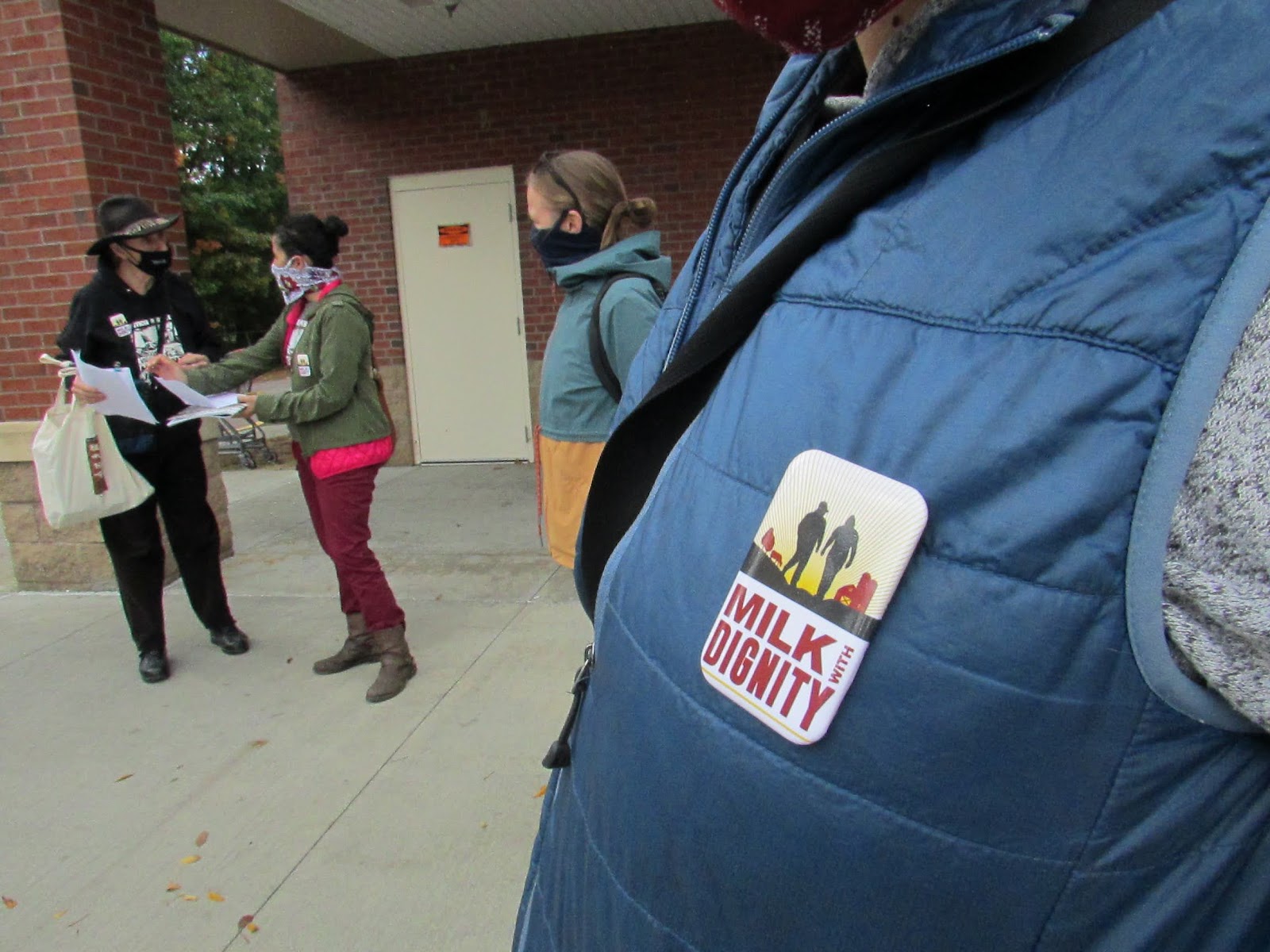 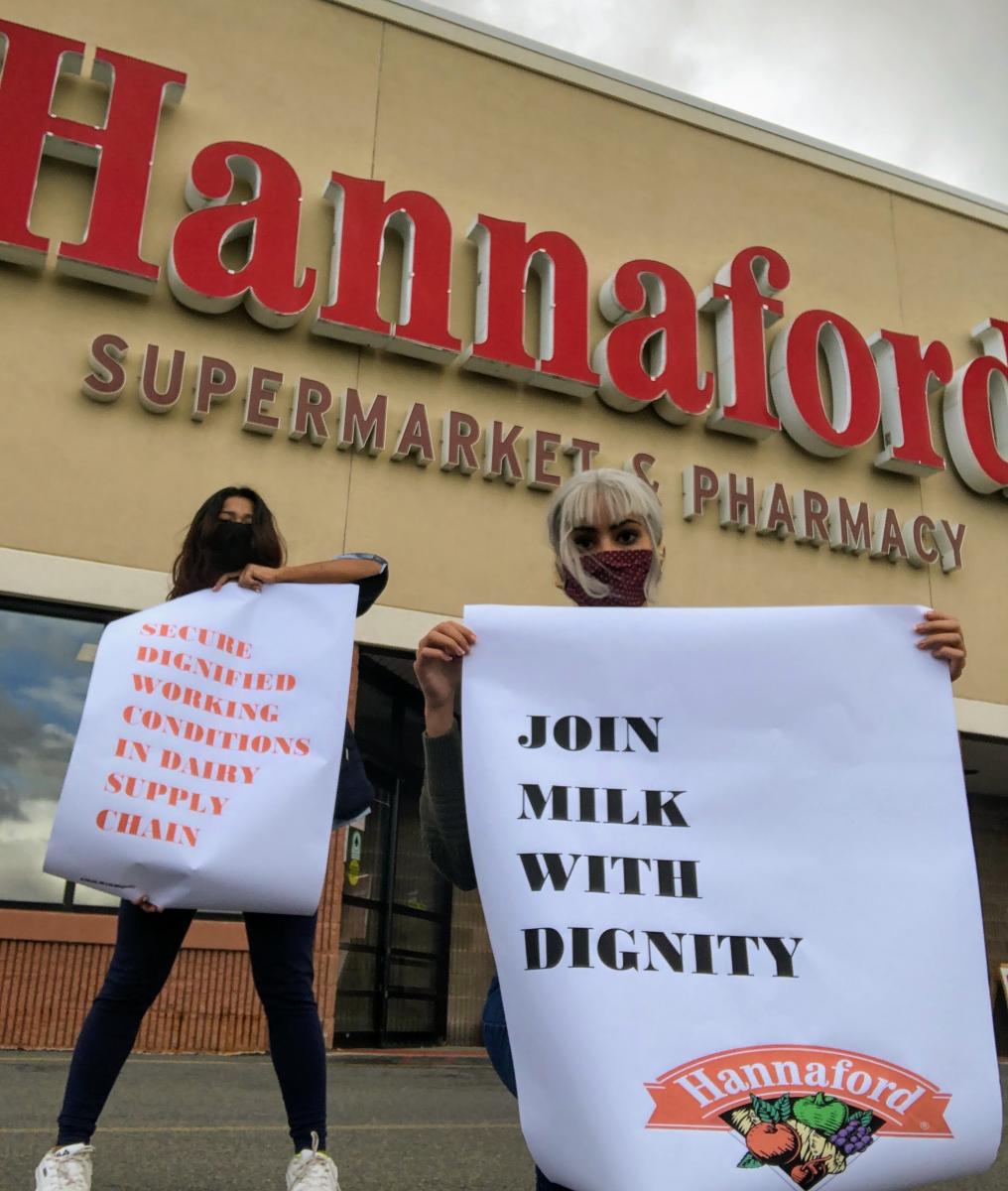 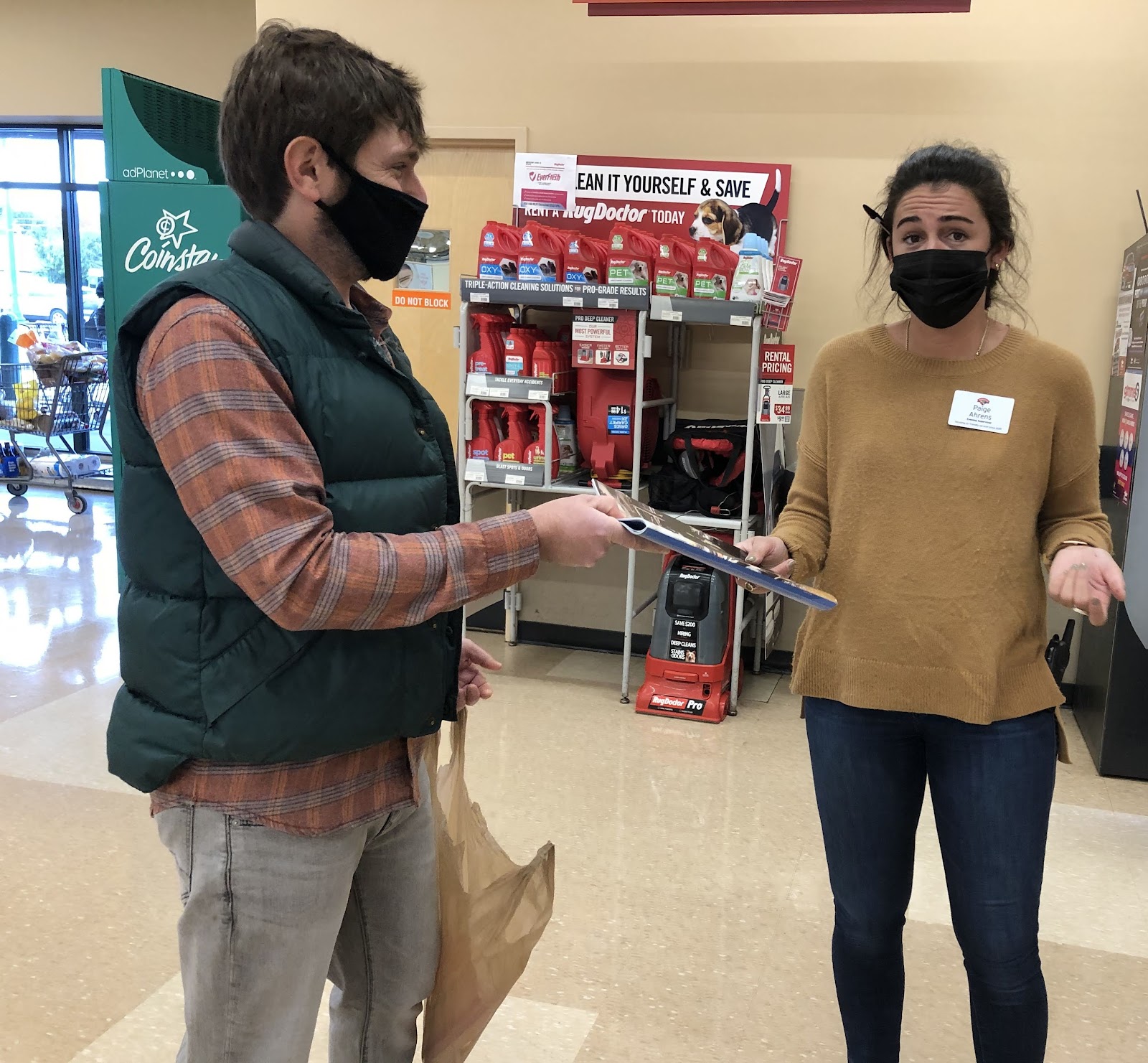 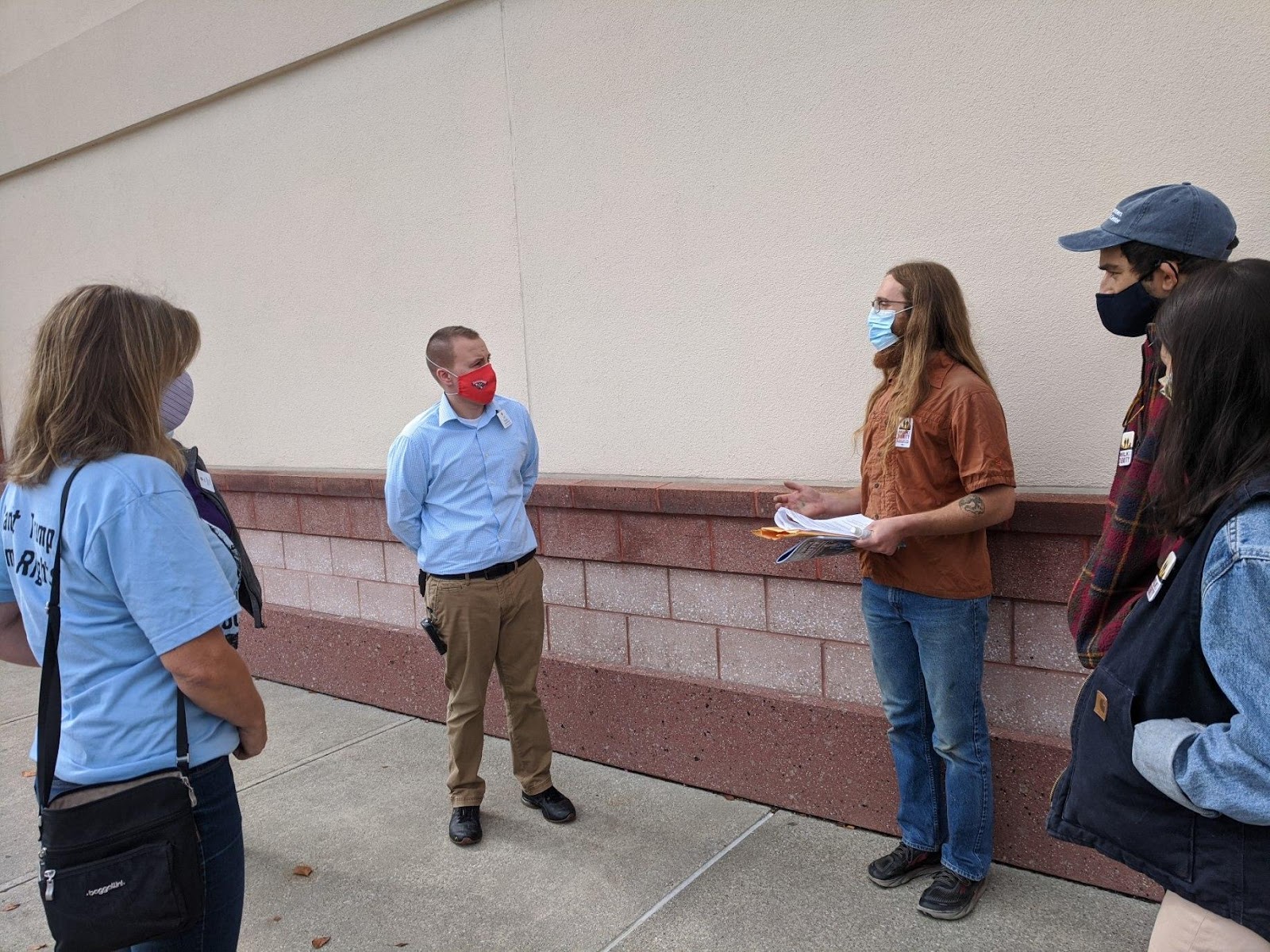 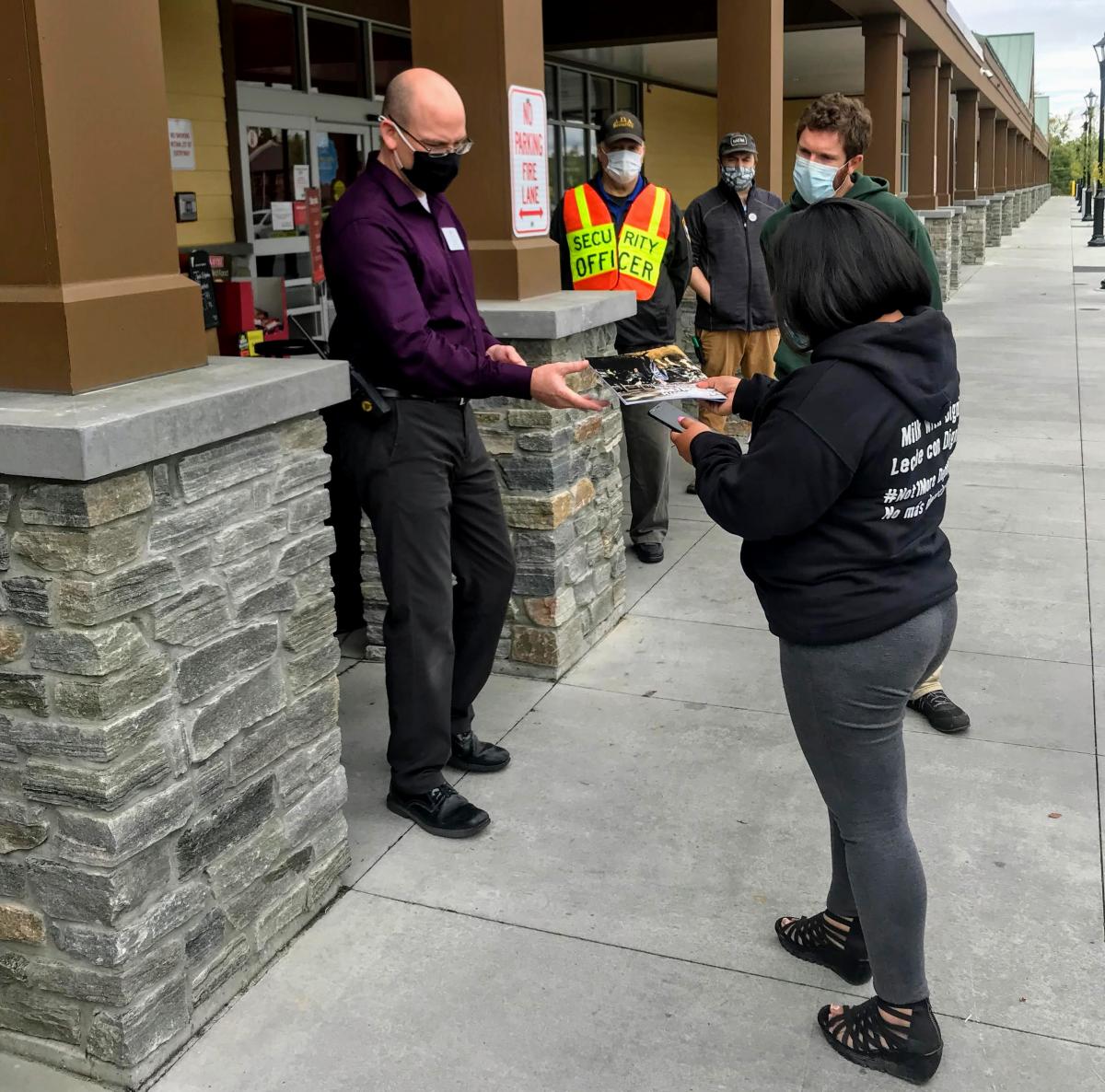 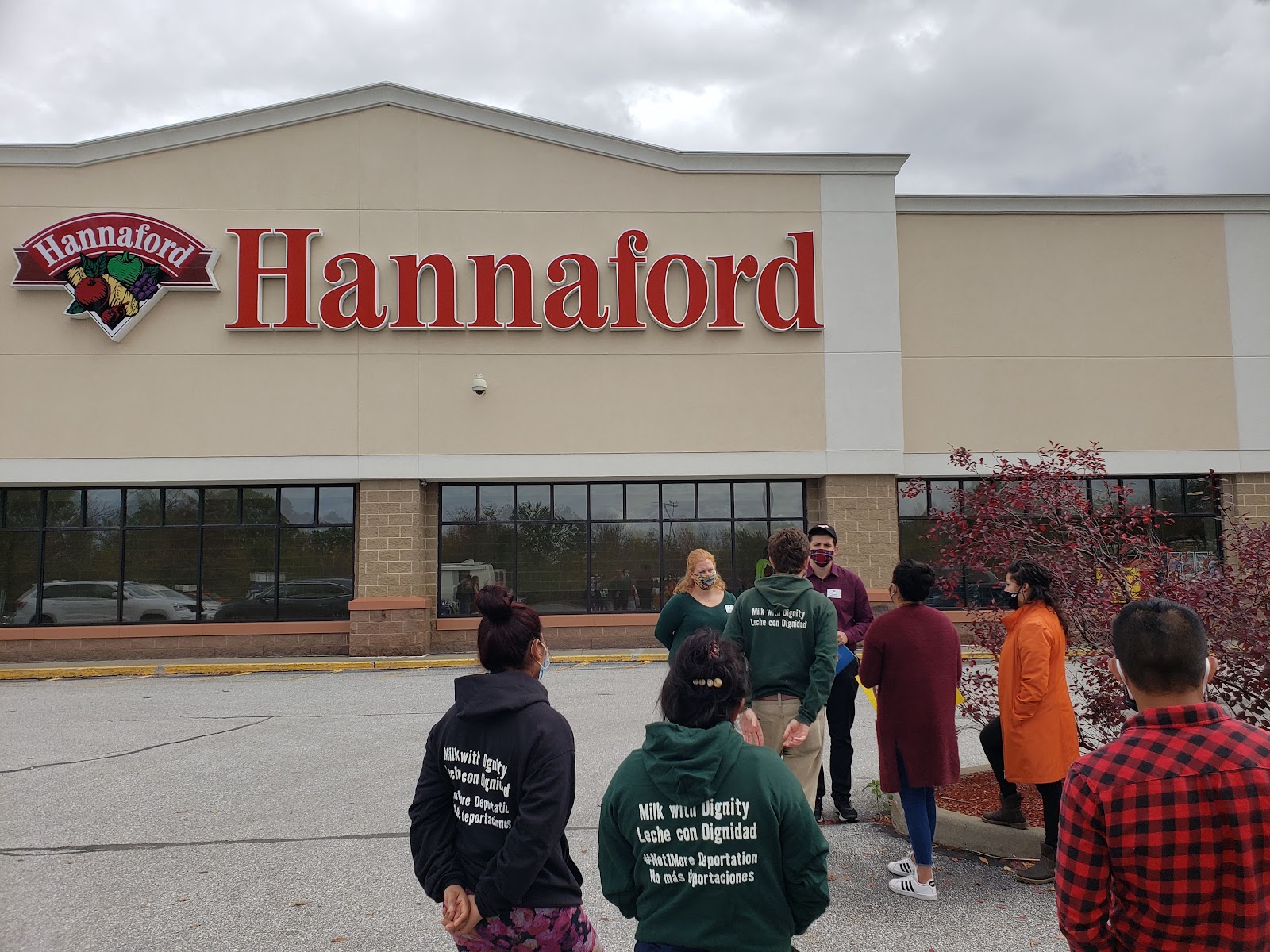 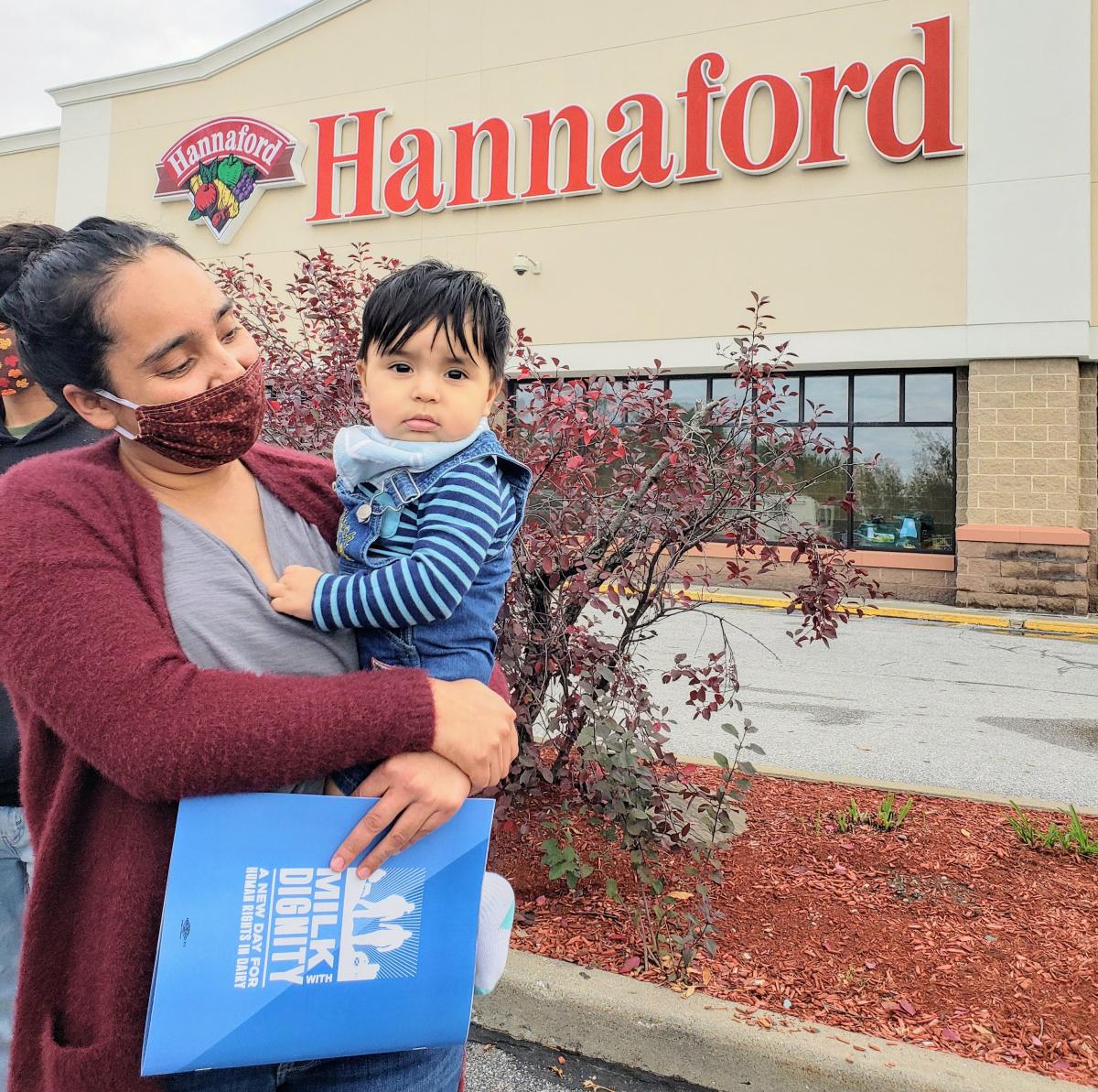